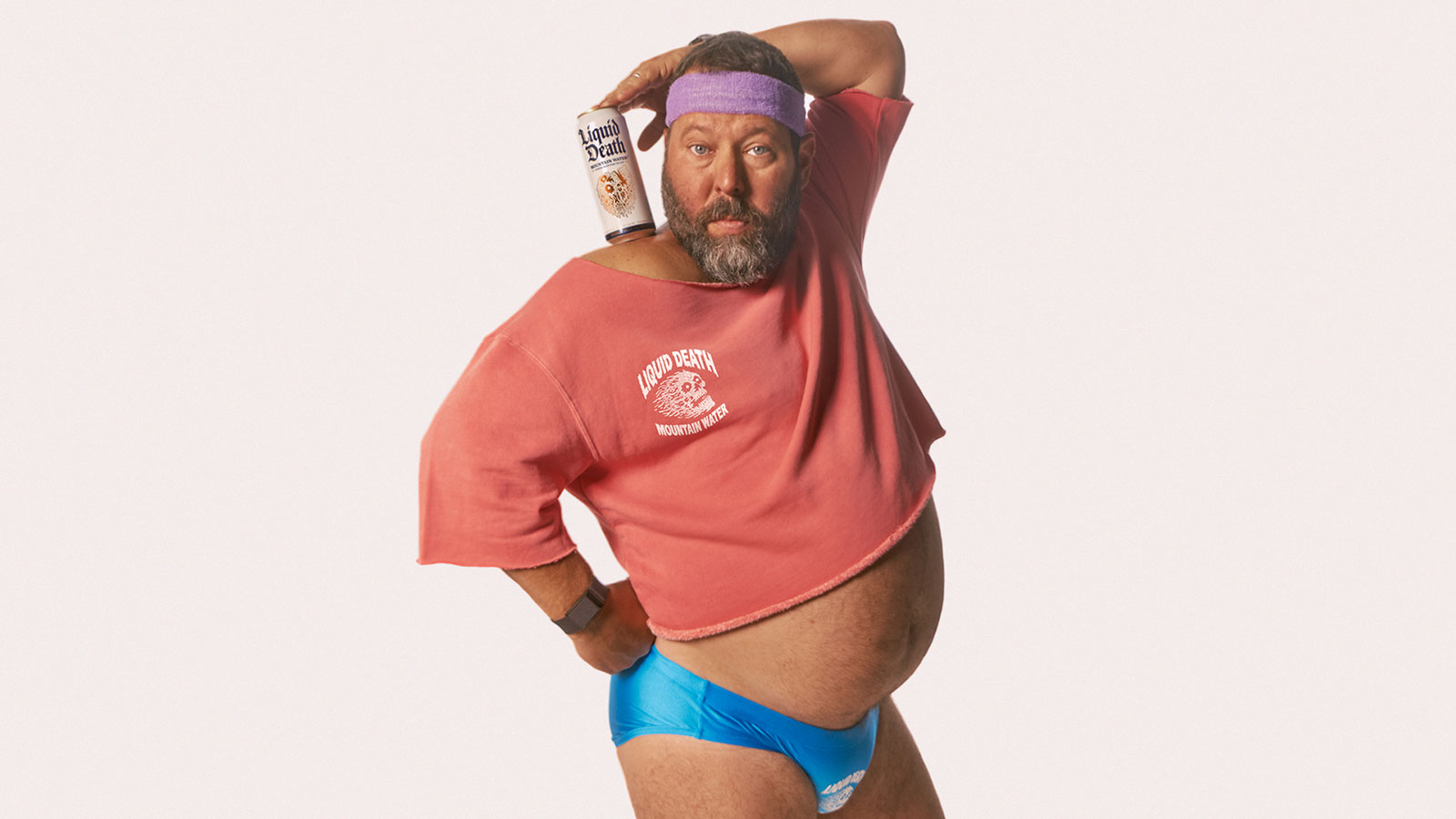 "A lot of people ask me, 'Hey, Bert. How do you get a body like that?'" he begins, exposing his saggy, shaggy midriff. "Well, I believe this is what bodies were meant to look like when God created them. This is what bodies looked like before the influence of steroids or the Olympics or holding your breath. If you would like to unlock your inner machine and get a body like this, let me be your guru, your sherpa, your lover."

You can immerse yourself in the full-length presentation, produced by the brand's in-house creative team, below. Some bits are NSFW. (Bert's bits, swathed in spandex, pop to mind.) At various points, he discusses his gym regimen (complete with jalapeño poppers), busts into Flashdance-inspired groin-thrusts, and explains how to snort cocaine—prompting a huge on-screen disclaimer. Near the end, after pounding down so much product on set, he grabs a wastebasket for some bathroom humor.

"He must have drunk about 10 cans of Liquid Death through the shoot," Liquid Death CEO and cofounder Mike Cessario tells Muse. "We just ad-libbed the peeing during the credits after we started wondering how he could hold all that water."

In fact, Kreischer improvised most of the material.

"We had originally written a script, but he fully ad-libbed the entire 10-minute commercial," Cessario recalls. "He was doing such a good job that we ran with it and just tried to hold in our laughter while we were shooting."

As for the initial inspiration, "We noticed that many water ads are overly aspirational, and they don't seem very inclusive," Cessario says. "It’s always Greek God-style athletes or models doing these intense workouts. We thought it would be a great idea to enlist someone who wouldn't usually be seen in a fitness campaign. We moved forward with Bert because even though he likes to have a good time and isn't a health nut, he still cares about proper hydration and making healthier beverage choices when he can."

Sending up Reagan/Bush-era tropes adds to the self-conscious satirical stupidity, he says, and should help make the content extra sharable.

In keeping with the '80s theme, fans can buy VHS copies of "Body By Bert" while supplies last. And "Bert Pro Model Powerbriefs, signed by Bert" are available, too. (Stocking stuffers you can stuff!).

The work will live across YouTube and Liquid Death's social channels, with OOH elements slated to appear in New York's Times Square.

"Continuing our mission to build an entertaining brand, 'Body By Bert' fits right in with our previous work," Cessario says, "pushing health and wellness in a way that is more akin to the fun campaigns of junk food brands and alcohol."

Liquid Death's many (many!) notable pop-culture nods include the most nauseating taste-test ever, skateboards painted with Tony Hawk's blood, head koozies that hide warm brains from zombies, a horror flick about killer cans, and this metal album with lyrics based on the brand's hate mail.