Liquid Death, the Canned Water, Made a Heavy-Metal Album With Lyrics From Its Hate Mail

Soak up the fiery loathing of 'Greatest Hates'

If you really want to bug your roommates and neighbors during lockdown, crank up this collection of maniacal heavy-metal tracks from canned-water brand Liquid Death, with lyrics derived from the company's hate mail.

"As a polarizing brand, it means we have people who love us so much they'll never buy another water and even tattoo our brand on their bodies," Liquid Death co-founder and CEO Mike Cessario tells Muse. "But it also means we have plenty of haters who don't get the brand and think it's the antichrist."

"So early on, we started celebrating our haters and running Liquid Death ads featuring their social media hate comments," he says. They were the highest performing ads we have ever done."

That led the brand and its agency, Party Land, to brainstorm fresh ideas in a similar (throbbing) vein. And perhaps because "Liquid Death" sounds like a metal band anyway, they hit on the notion of "Greatest Hates."

The album art is suitably incendiary: 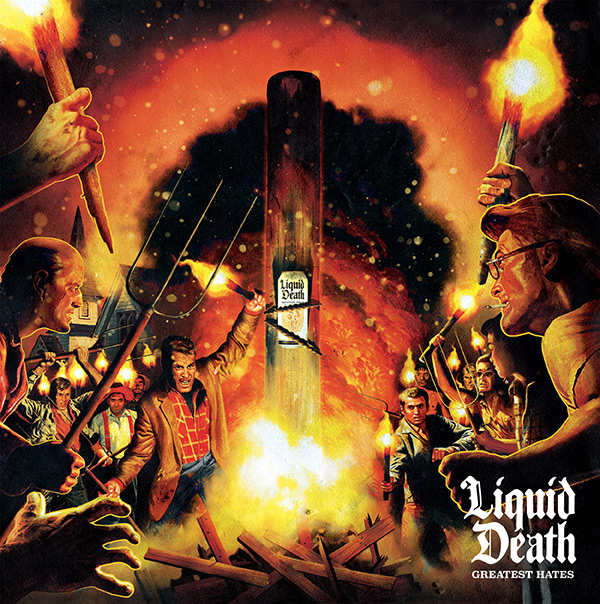 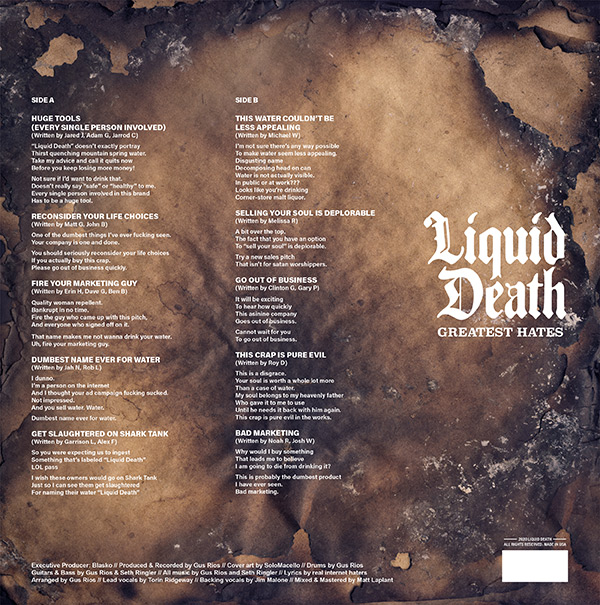 And this promo clip rocks impressively hard as it spoofs cable-TV album ads of yore:

Which cut will you love/hate the most? The opening track, "Huge Tools (Every Single Person Involved)," sounds plenty angry.

"Take my advice and call it quits now
Before you keep losing more money!
Not sure if I'd want to drink that
Doesn't really say healthy or safe to me
Every single person involved in this brand
Has to be a huge tool!"

The Liquid Death ad machine gets flailed on "Fire Your Marketing Guy."

"Quality woman repellent
Bankrupt in no time
Fire the guy who came up with this pitch
And everyone who signed off on it
That name makes me not wanna drink your water
Fire your marketing guy!"

Would Mark Cuban dig some prod? Not according to this next unkind cut, titled "Get Slaughtered on Shark Tank.":

"So you were expecting us to ingest
Something that's labeled Liquid Death?
I wish these owners would go on Shark Tank
Just so I can see them get slaughtered!"

You can head-bang to the rest of the collection here…

… or buy it on limited-edition vinyl, boomer.

All in all, this laughably loud sonic subversion works on the level of the New York Lottery's fake metal-band EP—though it's actually way more obnoxious. (After a few dips in the heavy water, your shredded nerves might need to chill with this botanical garden's immersive playlist of nature sounds.)

"Our audience is very broad," Cessario says. "Just look up #liquiddeath on Instagram and see the spectrum of people loving the brand. Male/female, mom/metalhead—our audience is essentially anyone with a bold sense of humor. If you like vulgar standup comedians, Adult Swim, SNL, zombie movies and even Larry David, you'll probably like Liquid Death."

"Greatest Hates" follows several unconventional Liquid Death campaigns, including this Halloween curse from a real witch and an ecologically minded commercial that takes places in hell.

Separately, the brand created a program to help sidelined bands during the Covid-19 crisis. Rockers who promote the water to their fans and followers can earn 50 percent of the profits they generate. Already on the bill: Converge, Mutoid Man, Ace Von Johnson and the Bombpops.