Just when you thought it was safe to get canned water

Liquid Death promises "a tale of savagery ... and sustainability" in Dead Till Death, a gory-comic 43-minute horror movie skewering slaughter-in-the-woods slasher conventions while pouring on the product shots.

As you'll see from this trailer, Liquid Death cans spring to life ... with a thirst for human blood:

Subverting the product-as-hero trope, "we made the brand the villain," Liquid Death chief executive Mike Cessario tells Muse. "It's a ridiculous concept—cans of water that roll around killing people. But we wanted to take this ridiculous idea super-seriously rather than trying to make it super-jokey."

Good thing drinking the stuff doesn't knock off the cast—that might reflect poorly on the brand. And those aluminum cans are fully recyclable. So they cut down on pollution—and could rise up to kill again!

"We were trying to do a lot with a little," Cessario recalls. "We shot all through the night most nights, and even had to deal with shitty weather and rain at times. The cast was great—and a few got so into their roles, it was almost freaky in itself."

Judging from that trailer, those cans sure got into their rolls!

Dead Till Death will get a live Los Angeles premiere and stream at LiquidDeath.com, as well as on Amazon Prime Video, Apple TV and elsewhere. "We've always taken an entertainment-first approach with our marketing," notes Cessario. "We've successfully released two albums on Spotify [with lyrics based on the brand's hate mail] and a 28-minute infomercial with Netflix [it's got zombies!]."

"We produce entertaining things that we believe people will laugh at, be surprised by, and share," he says. "If done right, we think they'd even be willing to pay to watch it like any other type of entertainment they consume." (Indeed, Dead Till Death won't stream for free.)

Taking a fans-first approach, "we'd never insult them by producing something that is purely a sales message they'd never choose to watch on their own," Cessario says. "By giving people something of value, they respect your brand on another level." 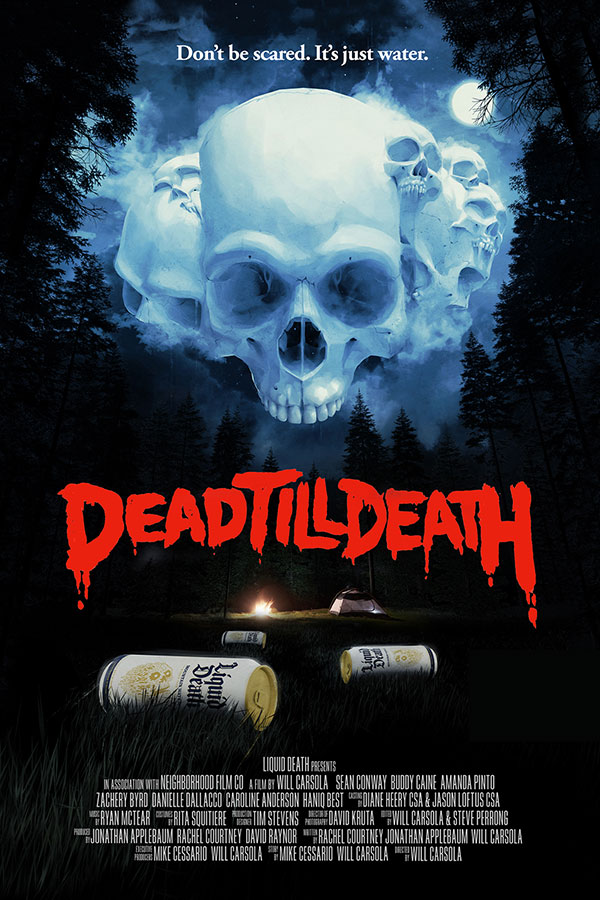 Synopsis:
When Tom, Brad, Nancy, Quig, and Hal decide to leave the city and set up camp deep in the woods for a weekend of disconnecting from phones and social media, they become hunted by a pack of evil killers. They set out for a wild time far away from life, laws, and technology, but instead of reinventing their lives, they must run for them.