Martha Stewart Gets Bloody Handy With a Cleaver for Liquid Death

Turns out she's a real cut-up in the kitchen 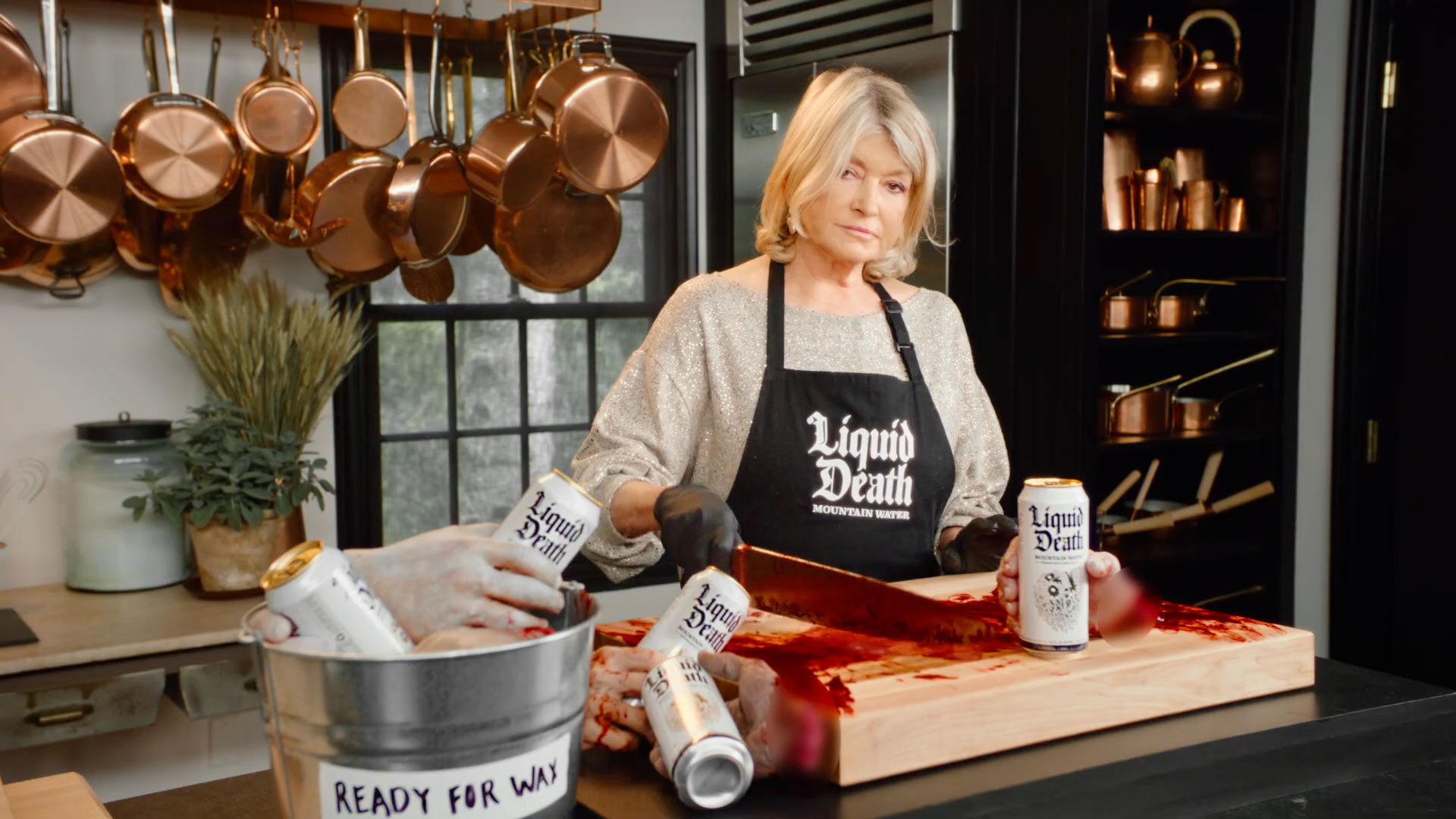 You've got to hand it to Liquid Death for casting media maven Martha Stewart, the oh-so-elegant grand dame of cooking and entertainment, to promote the canned water brand's $58 Halloween candle in silly, shuddery style.

To hype the novelty item, Stewart wields a cleaver as unsuspecting dudes line up for the chopping block. (Those easily triggered might object to some screamy bloodletting.)

Two thumbs way up (and off) for that one. Ouch!

The work backs the brand's #DeathToPlastic environmental mantra and seems a fittingly fiendish follow-up to its nauseating taste test, profane spoof workout video, goofy-gruesome horror flick and skateboards painted with Tony Hawk's blood. (At least he got to keep all his digits. We think.)

The clip plays like an SNL spoof, but with the real Martha (and it's probably funnier than most of them, too). Stewart has been a good sport about sending up her image through the years, especially lately, hanging with Snoop Dogg and going topless—sort of—for Green Mountain Coffee.

And she's totally on brand. You might remember, Stewart actually served time for hacking men to bits. Or maybe it was for insider trading. They're both bad things to do!

Andy Pearson, Liquid Death's VP of creative, who led the in-house team behind the candle carnage, says Stewart's cross-generational appeal made her a prime pick for the campaign.

"Martha has been an icon for decades. Your grandma knows her, and your nephew knows her," he says. "When the idea of using her came up, we thought, if we did it, it would have to be in some way that no one has ever seen or would ever expect. So naturally we thought it'd be great if she seemed to be chopping off hands to make candles. It's such a great fit precisely because no one would ever imagine these two personalities [tasteful and kill-y] coming together." 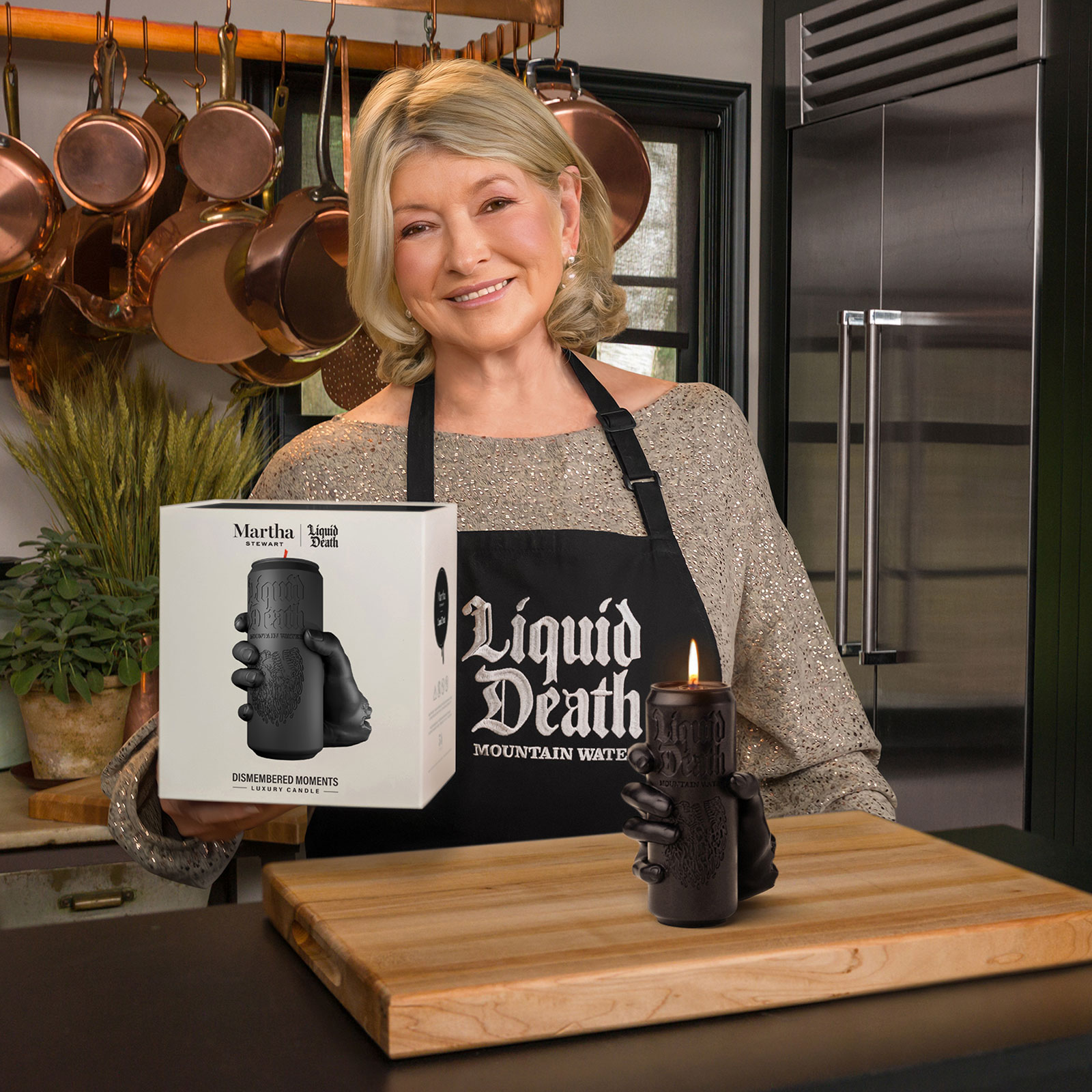 Already a Liquid Death fan, Martha took to the idea right away, Pearson says, inviting the crew to film in her Bedford, New York, farmhouse kitchen. "It felt like we were entering hallowed ground. I just kept thinking of how my mom would probably literally kill to be in my shoes," he says.

And Pearson's a long-time Martha maniac, too.

"My very good friend Kasia Canning, ECD at BBH New York, and I have been sharing Martha Stewart Instagram posts back and forth for years," he says. "It's literally 70 percent of our interactions. Keeping this secret [of working with Martha] from her has been one of the hardest things of my life, and I can't wait until she sees this article and starts shooting me a frenzy of angry texts. Hi, Kasia!" 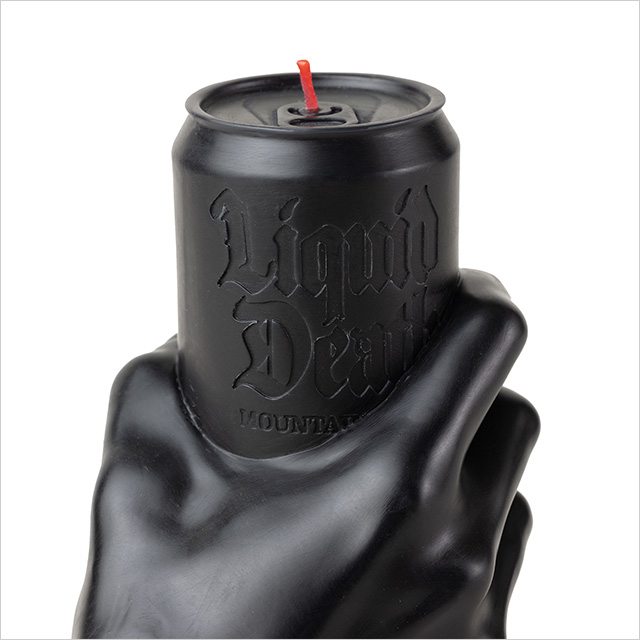 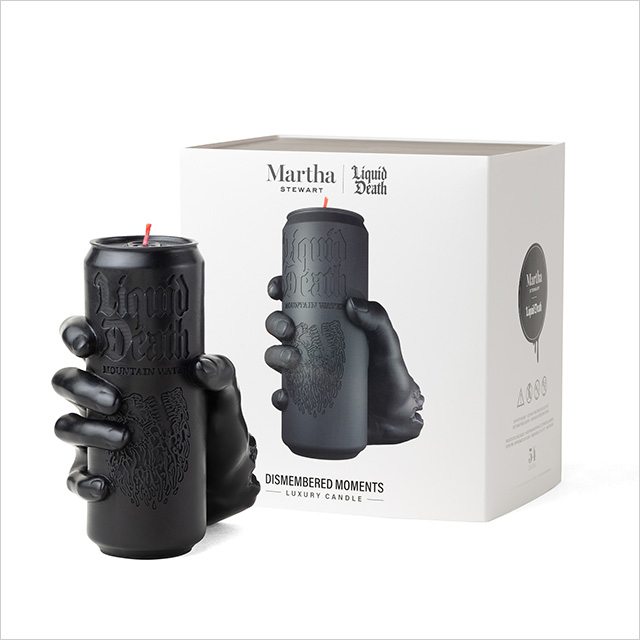