Ed Helms on Finding the Comedy in His Recent Commercials

Plus, his journey in music and favorite classic ads

Best known for portraying annoying, musically inclined paper salesman Andy Bernard in The Office, actor/singer Ed Helms has evolved into an advertising force to be reckoned with.

Of late, he's notched riotous performances for Xfinity and Progressive, displaying great range and consummate comedic skill. There's something special about his vaguely on-edge, dude-next-door persona. When that face pops on screen and the pitch begins, it's tough to turn away.

For Xfinity, he hangs with former heavyweight champ Evander Holyfield and gamer FaZe Swagg. Note the roomful-of-Eds at the :22 mark—that's Helms' favorite bit:

And at the height of the pandemic, Helms played himself—plus, at times, a pretty mean guitar—hosting a TX Whiskey-backed streaming concert series to raise funds for musicians and medics.

Are branding icons like Ryan Reynolds and Lil Nas X worried? Surely not. Still, Helms' advertising star is on the rise, like the WiFi rocket-house he rode so nobly for Xfinity.

Below, Muse chats with Ed, who also played Stu in the Hangover films and currently headlines the Peacock sitcom Rutherford Falls. The conversation touches on recent projects, commercials he loves, and his diverse musical influences:

Muse: Do you approach acting in :30s and :60s differently than long-form TV and films?

Ed Helms: Commercial production is so much faster than traditional narrative production, and that keeps me on my toes. It forces you to make fast decisions and trust your instincts, which is great. But overall, the creative approach isn't all that different. Instead of talking to another character in a commercial, I'm simply talking to the audience. In both contexts, I'm just trying to stay grounded and real while looking for as much comedy as possible.

Can you talk a bit about your Xfinity campaign?

These spots were really fun. We had such a great cast and crew and we got it all done on the Paramount lot in Los Angeles in just a couple of days. Really fun working with legends like Evander Holyfield and FaZe Swagg. My favorite part was doing all the fast costume changes to shoot all of my multiples in the background. Even though it's just a quick visual joke in the final spot, it took a while to shoot and each look was a fun character. Those fast wardrobe changes are always a blast because it feels like you're in a crazy, old-timey vaudeville show. 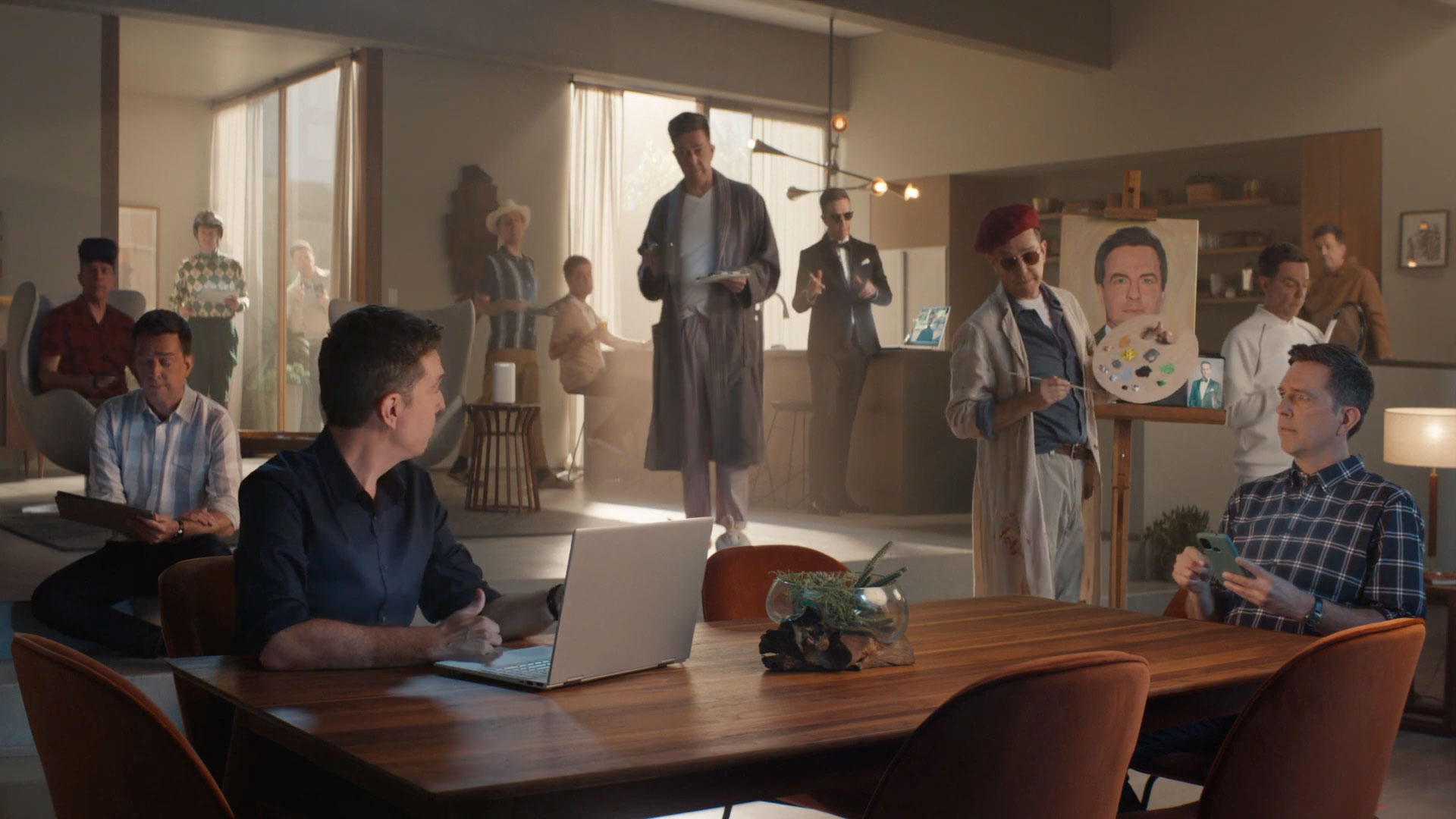 Your Progressive work was equally awesome, but in a different way. You really aired it out on vocals.

I got to stretch as a singer trying to nail three very distinct music genres. I actually had no idea I could belt that hair-metal style until I got into the recording booth and worked on it for a while. Very proud of how they turned out. And of course, they're just ridiculously silly, which is always a blast.

You've done some music videos for Maroon 5 and Mumford & Sons, plus your own album, is that right?

I play in a band called The Lonesome Trio, and we recorded an album that came out in 2015. It's kind of a bluegrass/folk sound, and I'm enormously proud of it. I also hosted a music web series during the pandemic called the Whiskey Sour Happy Hour on YouTube, which raised a good deal of money for frontline workers. I love music and I love collaborating, so there will definitely be more fun stuff in the future.

Is bluegrass your favorite style?

I'm truly an omnivore when it comes to music. I was lucky enough to attend Oberlin College, which also has a world-renowned conservatory of music. There was so much incredible music happening all around me, and I couldn't get enough. I love jazz and classical music—in particular, the piano masters like Thelonious Monk, Bill Evans, Chopin and Prokofiev. That said, I probably listen to old country and bluegrass the most, like Roger Miller, George Jones, Jimmy Martin, Del McCoury, the Louvin Brothers. It's a long list. And, of course, you might catch me in my car shouting along with Katy Perry or Broadway show tunes.

Which classic ads do you love?

The ones that stand out to me usually have some kind of really funny, deadpan performance, or a really moving poignancy to them. There's a Computer Associates spot called "Amnesia" with not one but two of the best pratfalls I've ever seen. Great physical comedy, and the reaction shots are hysterical as well. A funny one that sticks in my memory from childhood is "Where's the Beef?" for Wendy's. And on the poignant side, there's Volkswagen's commercial with Nick Drake music from about 10 years ago that really captured a mood and spirit beautifully.

What did you learn about advertising from the "Local Ad" episode of The Office?

Well, I guess I learned that a good jingle can go a long way!

What's next for Ed Helms?

Season 2 of Rutherford Falls drops on June 16. It's a comedy series with hard laughs that follows the dysfunctional residents of a small town and an adjacent Native American reservation as they tackle work, romance and some jarring changes to their community. Season 1 earned a 92 percent score on Rotten Tomatoes, and we all think Season 2 is twice as good!