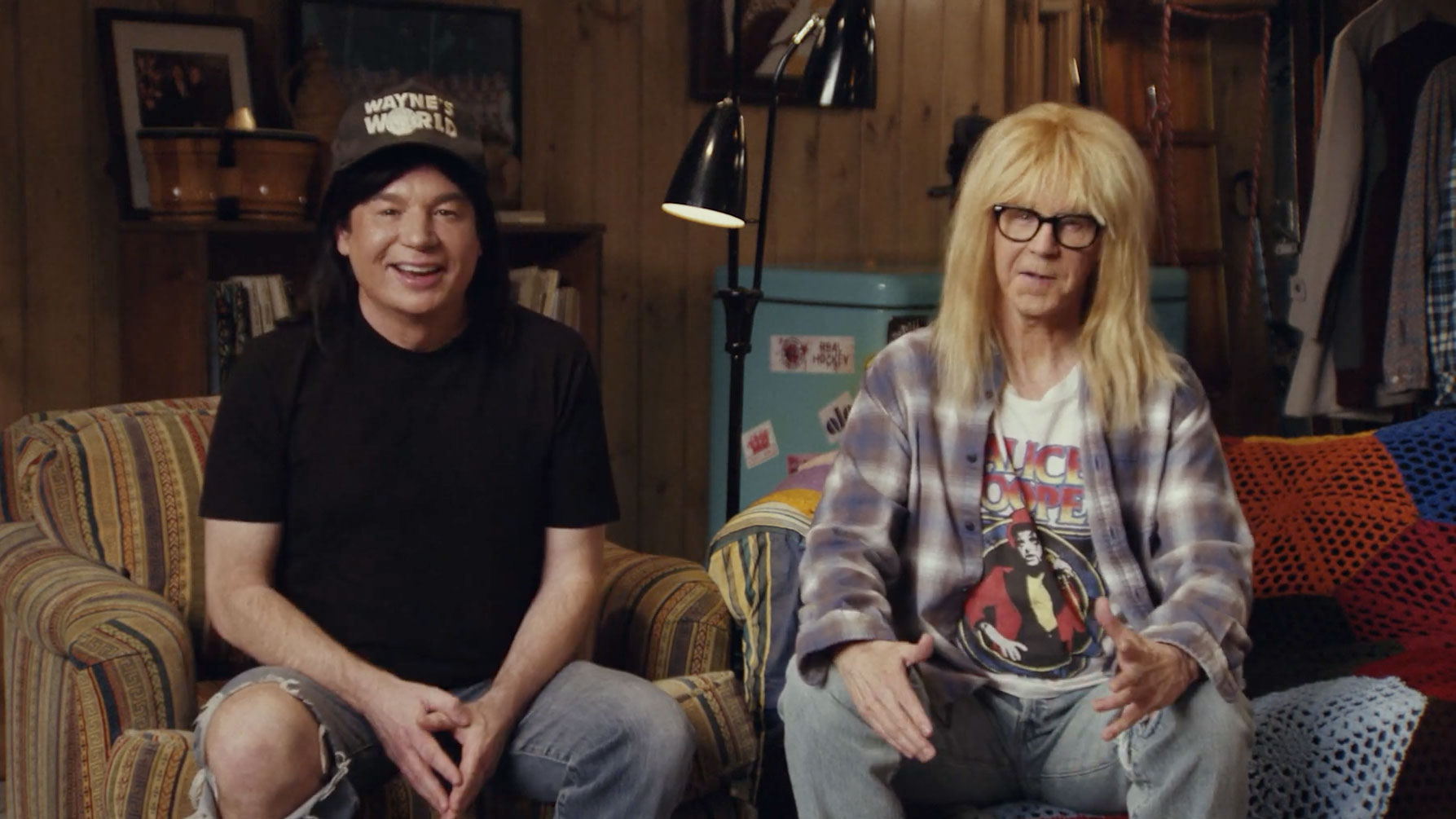 For its Super Bowl debut, Uber Eats got Mike Myers and Dana Carvey to reprise the Wayne's World schtick they made famous a generation ago on Saturday Night Live and in feature films.

On Sunday, Wayne and Garth, those supremely silly slackers with their own local-access TV show, return in a minute-long spot from Special Group U.S./Australia and Smuggler director Guy Shelmerdine. It will air during the third quarter, asking viewers to support local restaurants by ordering through Uber Eats.

After teasing the reunion on SNL last week, the brand unveiled the full-length ad today. It takes place on a loving recreation of the iconic Wayne's World set (Wayne's parents' basement in Aurora, Illinois) and features fun comic support from Cardi B.

It's all wink-wink meta to the max, yielding a riotous reprise that works both as a piece of nostalgia and fresh absurdist fare. Even if you're not familiar with the original, it's still a hoot.

"As a local access show, we want everyone to support local restaurants," says Myers-as-Wayne.

"BUT, we'd never manipulate you the way all these other commercials do," Carvey-as-Garth chimes in.

Outsized "EAT LOCAL" graphics flash across the screen, Garth's luxurious blond locks flow in shampoo-ad-slo-mo, and the pair cuddle with freaky baby versions of themselves.

"We'd never shamelessly rely on a celebrity cameo," Wayne says, as the camera pans to reveal Cardi B lounging next to Garth on the couch.

Naturally, a TikTok-style outfit-swap ensues, with the guys bopping in Cardi's feathered garb, and the rapper dressed as Wayne (and then Garth), while all three chant "Eat Local. Loc Loc Loc Loc Loc!"

Myers and Carvey introduced Wayne and Garth more than 30 years ago (!), and they've visibly aged—d'uh. But that actually works in the spot's favor, adding an extra helping of in-jokey ridiculousness to this particular Uber Eats delivery. Ultimately, the spot scores because comedy legends Myers and Carney—now 57 and 65 years old, respectively—can still bring it. With manic energy and sharp timing, they breath fresh life into Wayne and Garth, and leave us wanting more. Cardi gets into the "party-on" spirit, too, and the trio share great chemistry.

"This ad does more than just make you laugh, it makes you feel good about the effort it supports," Special Group creative chief William Gelner tells Muse, succinctly summing up the viewing experience.

Moreover, the characters "cross several generations because they're so likable and fun," Gelner says. "While younger audiences may not remember Wayne and Garth, they will get a true glimpse into a duo that was a significant part of early-'90s culture. Plus, we have the amazing celebrity cameo of Cardi B so the viewers get nostalgia mixed with modernity."

During the shoot, the agency team worked closely with Myers to get the vibe and details just right. "He is meticulous with his craft, and watching the scripts come to life was like taking a master class in comedy," Gelner recalls.

In addition to the :60, Myers and Carvey will appear with classic rocker Alice Cooper in a two-and-a-half-hour "credit-roll" video spotlighting the 100,000 local eateries available on the Uber Eats app. That clip will post on YouTube and across social just after the game.

"It's a rare person who would sit down through all these 100,000 restaurant thank-you listings, so we made the video scrollable by location and we also made it fun to watch," says Gelner. "Alice, Mike and Dana chat about the origins of football, goof around with 3-D glasses and they even compose and perform a song."