A brilliant idea, and a ridiculous timeline

One of the big crowd-pleasing commercials from Sunday's Super Bowl was Jeep's commercial revisiting the 1993 film Groundhog Day, with Bill Murray reprising his role as Phil Connors—and with the Jeep Gladiator disupting the original narrative in a fun way.

The spot, which also starred Brian Doyle-Murray and Stephen Tobolowsky from the film, was well received by industry watchers and the general public alike, topping Adweek's list as well as the USA Today Ad Meter. (It's in the running for Clio's Super Clio as well—judging for which is happening Monday morning.)

In a game full of celebrity endorsements, none was as timely, unexpected and just plain delightful as Murray's. Muse caught up with the ad's director, Jim Jenkins of O Positive, to hear more about how it came together—including the crazy timeline. (Remarkably, they shot this thing last weekend.)

Muse: How did you get involved in the project? It must have been one of those ideas that you knew would be really fun to shoot.

Jim Jenkins: Chad Broude [CCO/Co-founder at HighDive] called me and said Bill Murray might be interested in doing this. And every time Chad called, it seemed more and more likely, which only seemed to become real when Bill arrived in Woodstock. By the way, Chad and Mark Gross and the people at HighDive really killed it this year at the Super Bowl, and they all deserve it. They also are responsible for my partner David Shane's commercial for Rocket Mortgage with Jason Momoa. I remember some trade publication once referred to O Positive in terms that now certainly apply to HighDive: "Small but mighty."

How did you go about being as authentic to the film as you could?

Honestly, once Bill agreed to do it, making everything authentic to the film came together quickly after that. His brother Brian Doyle Murray (Buster) signed on, as did Stephen Tobolowsky (Ned Ryerson), and we got the rights to the music, and Sony Pictures said yes, and so on. 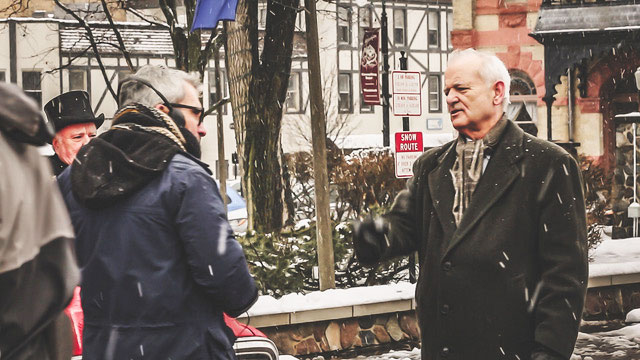 Jim Jenkins and Bill Murray on set in Woodstock, Illinois

Were you a fan of the movie beforehand? Did you watch it again a few times to refamiliarize yourself?

The movie is burned into my brain from so many viewings, mostly for all of the little things Bill does in that film. Actually, so many of his performances really stick with you, even when he plays a relatively minor role, as he did in Tootsie, which is one of my favorites. I only rewatched Groundhog Day in its entirety afterwards. Still great.

What was it like working with Bill Murray? He hadn't shot a national commercial before. Was he into it?

Honestly, I kind of felt the way I did the first time I filmed Scorsese, and that was that it was only intimidating shooting Bill because I knew that the expectations for the spot would go that much higher. Bill was great, though. And he loves the final product.

What kind of timeline were you working with, and how hectic was it to produce this?

Very. We shot this the weekend before the Super Bowl. Chad and I worked with a terrific editor, Grant Gustafson at Cutters, who set up a room in our hotel to cut at night, and then we spent Monday after the shoot editing back in Chicago. The edit came together quickly, and got approved quickly. Lack of time can sometimes work in your favor.

How happy are you with the finished product?

Below, check out an extended cut of the spot, with new scenes and a new end line.