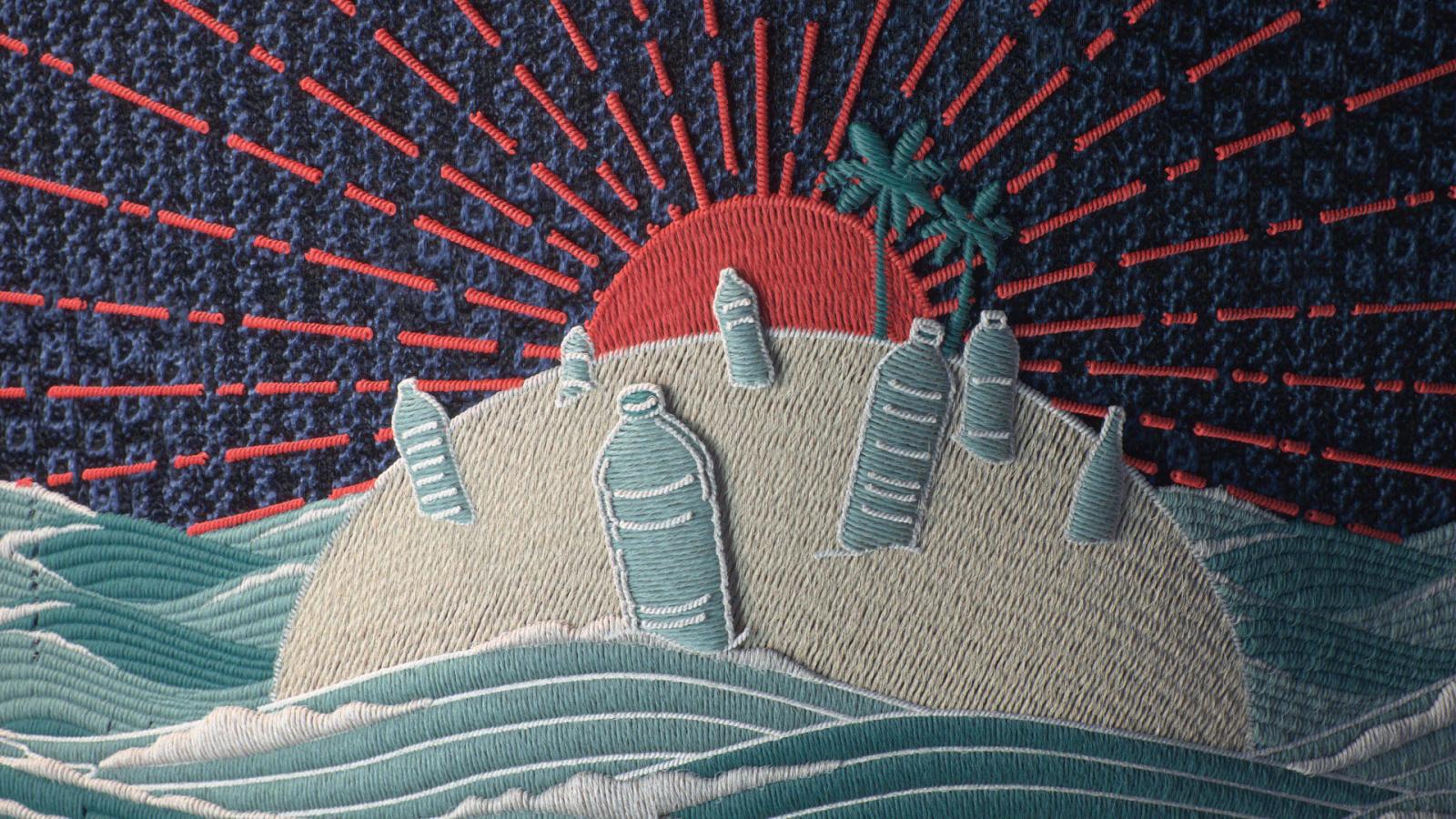 A nicely knit solution from TBWA\Neboko for Adidas

Plastic in the ocean is one of our great existential crises. In the disaster map that lives in my mind, perpetually growing like a dark Narnia, it manages to loom larger than the BP oil spill, a live feed of which once transfixed viewers who sat watching oil gush into the sea, sometimes for hours at a time, like a great black maw vomiting poison.

Eight million tons of plastic are dumped into the ocean every year. It's the reason we find fragments of microplastic in our drinking water. It kills sea animals and creates horrific floating islands, tributes to negligence that are larger than some countries.

And bottles! Some 14 percent of all litter stems from beverage containers. In 2014, 100.7 billion plastic drink bottles were sold in the U.S., or about 315 bottles per person.

Adidas aspires to be among the brands doing something about it. With activist group Parley for the Oceans and creative agency TBWA\Neboko, it launched "Run for the Oceans," an effort to fight marine plastic pollution in consumption and action.

The campaign's a two-parter: With Parley, Adidas created a running shoe called the Adidas x Parley UltraBOOST, whose very threads are made of plastic. One pair, the video above claims, comes from 11 recycled plastic bottles.

Alongside that, global events and activities drove runners to literally run for the oceans. Every mile or kilometer was matched by $1 in donations from Adidas, capped at $1 million, for the Parley Ocean Plastic Programme. (Per the site, nearly 950,000 global runners participated, yielding over 7 million miles.)

"Our target audience is runners in major cities across the globe," business director Tomas Pruijs of TBWA\Neboko tells Muse. "It's a rallying cry to motivate people to run for a cause bigger than their own personal ones. Adidas supports local running crews in all major cities, so we invited captains from key cities to feature in the campaign."

"We approached the strategy, the creative thinking and the overall process in a collaborative way. A good idea can come from anywhere," adds creative director Thomas Jullien. "Our message was strong, and we needed to ensure an immediate connection with our audience that would trigger them to join the movement and own the cause, and ultimately feel part of the change."

The birth of the ad

In addition to a campaign toolkit, TBWA\Neboko produced a video (above) with help from Psyop and Golden Wolf.

"We needed a striking piece of work that visually communicates our main message: These high-performance running shoes prevent plastic waste from polluting the oceans," says Jullien. "What better way to tell that story than by letting the product do it?"

The insight was simple, he adds: "Running creates energy. When you run in UltraBOOST Parley, you create energy for the oceans. As you move forward, you spread the message and help stop marine plastic pollution. Showing how plastic is collected and turned into a high-performance running shoe was the unique selling point we focused on. That is why we let the Primeknit upper do the talking, by turning it into our canvas and embroidering the creative story onto it."

The ad's artisanal quality makes it feel both playful and organic.

"Psyop and Golden Wolf did a great job creating a dynamic and unified stop-motion look in both live-action and embroidered scenes," says senior art director Benjamin de Villiers. "Adidas Running has a mantra: Real, raw and fast. To adhere to that, we start in the real world, then dive into the Primeknit as the embroidered story kicks in."

"The complexity of the embroidery meant that we had to lock down the storyboard at a very early stage," de Villiers says. "Same for all the next steps. From sketching each scene, to building the animatic, everything had to be timed precisely before we went in production. Meanwhile, Psyop scanned the Primeknit upper and captured the textures of the Parley thread. And they wrote entirely new code to apply the embroidered texture to each frame."

The result, he observes, is stunning.

"The video tells one story, but is made up of shorter mixed-format vignettes. This approach allowed us to repurpose scenes into countless looping GIFs and interactive social stories, perfect for all of Adidas's various media channels."

The video below, shot live, was directed by RJ Sanchez, with Sophie Hemels on photography. It features local influencers and running communities.

How the product saves the planet

"The Primeknit upper of the FW18 UltraBOOST Parley is made of Parley Ocean Plastic," says senior copywriter Andrew Maaldrink. "Parley makes this textile by upcycling plastic waste—predominantly PET bottles and bottle tops—that they intercepted from beaches and beach communities in the Maldives. The amount of plastic waste in each pair equates to about 11 plastic bottles."

This year, Adidas produced about 2 million pairs of the shoes.

"That's 22 million plastic bottles, or 260 tons of plastic waste," Maaldrink calculates. And that's hardly the end of it. "The collaboration with Parley is ongoing. They recently launched swimwear, and more is coming. But selling products is not the ultimate goal. Adidas believes very strongly that sport not only has the power to change lives, but also the world. Our client puts those words into action by raising awareness of the threat of marine plastic pollution."

"Everyone who touched the project, from account to production, is now a lot more conscious about virgin plastic," Pruijs says. "We now all use refillable drinking bottles, shop differently and spread the message to friends and clients alike. Also, 30 of us here at the office recorded our first [kilometers] for Run for the Oceans together on World Oceans Day. It's pretty awesome to see the effect a project can have."

Adidas has worked with Parley for the Oceans since 2015.