How We Made Cashmere Cat's Groundbreaking 'Emotions' Music Video

A creative triumph through real-time tech

The Mill team collaborated with Norwegian musician Cashmere Cat and renowned director Jake Schreier on this groundbreaking music video "Emotions." What's exciting is that the result is not only a visually stunning promo, but an advanced application of real-time technology that pushes the boundaries of creativity and innovation.

We had already been utilizing Epic's Unreal Engine on projects such as The Mill Blackbird and, more recently, Mill Mascot. As we progressed from a character animation system using hand and facial gestures, the natural next step was to take on a project that required full-body capture. We were thrilled to work with such an exciting team and use our technology to bring to life Jake Schreier's unique vision, Cashmere Cat's incredible music, the Princess Catgirl concept, and Margaret Qualley's choreography and performance.

We were initially tasked with crafting a unique CG character to represent Cashmere Cat in future music videos and appearances. Inspired by multiple references including Nordic folklore, Japanese anime and early '00s gaming, our design team crafted the fairytale feline, Princess Catgirl. In "Emotions," Princess Catgirl dances through her feline fantasy world to the beat of Cashmere Cat.

Jake Schreier is known for his highly choreographed storytelling that takes place within a single take, previously seen in music videos such as Chance the Rapper "Same Drugs," Haim "Want You Back" and numerous Francis and the Lights releases. To facilitate this method within a fully CG environment, The Mill's artists and technologists executed an ambitious real-time rendered shooting technique.

Filmed on a motion-capture stage, a cutting-edge virtual production pipeline was required to deliver a seamless relationship between the real world and the simulated. A large screen set toward the back of the stage, as seen at the end of the music video, displayed the real-time render of the CG character, landscape, props and structures. This allowed the director to, in effect, direct the CG character as opposed to the live-action performer, as she moved through the stylized world while being shot with a handheld camera. Filmmakers could adjust the character actions, the lighting, and even environmental textures, all while still on set.

In our traditional pipeline, the director and creative teams would be reviewing still images or sets of renders. In this case, the first time we saw the character come to life, on set, it sparked immediate suggestions, improvements and iterations from the filmmakers which we could immediately respond to.

Given that this project is a music video, the timing was everything. The dancer's movements had to match the beats of music. Every step had to be synched up and match perfectly.

Combining Epic's game engine Unreal with The Mill's creative technologists, designers and artists gave the filmmaking team an unprecedented perspective and level of control—making it the first music video of its kind. This reimagined approach to filmmaking still allows for traditional cinematic methods. Using this method, creative partners are able to see iterations, make changes and experiment all in real-time. In this project, environment, creative, physics and technology all combine to create a truly immersive experience.

Below, check out our sequel to "Emotions," the recently released "For Your Eyes Only."

Directed by Jake Schreier
Choreographed and Performed by Margaret Qualley 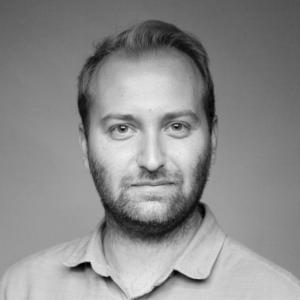