'Sopranos Nicknames' and How HBO Learned to Be Cool in Social

Our chat with Engine's William Gelner and Zihla Salinas

CANNES, France—It wasn't too long ago that HBO's social voice was as dry as the sands of Dorne. But with help from Engine, its social agency, the network has completely turned that around and now routinely puts out social content that's as entertaining—or at least, tries to be—as the programming itself.

"When I first started working with Zi and found out they had HBO social, I was stoked. I said, 'Oh my God, what an amazing opportunity,' " Engine U.S. chief creative officer William Gelner tells Muse—referring to Zihla Salinas, the agency's CEO.

"You don't have the traditional production budgets. You don't have the media budgets," he says. "You have to create your own media from nothing. As a writer, you're writing from a point of view and you're putting it out there in the world and you're hoping it's going to catch fire."

HBO's Twitter certainly did that in January, thanks to the "Sopranos Nicknames" campaign—dreamed up and executed by Engine—where @HBO started handing out mobster-style nicknames to people who asked for them (mostly celebs and other influencers, but also some brands and even other networks).

Muse spoke to Gelner and Salinas over coffee on Tuesday at Cannes Lions about the HBO campaign, steering social generally, and other work they've admired lately. 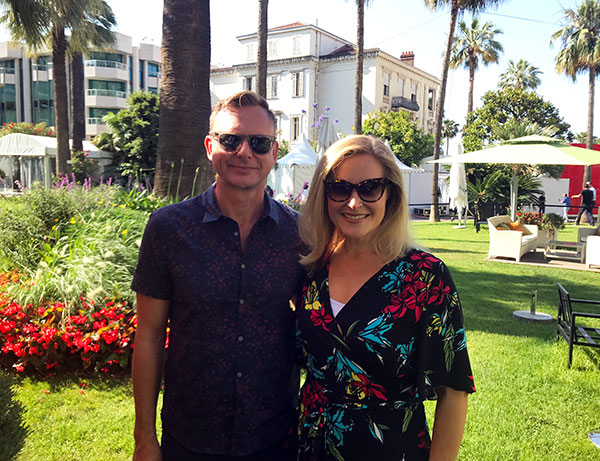 Muse: What was the story behind "Sopranos Nicknames"?

The idea was—OK, we have zero dollars for production. We have zero dollars for media. And we need to do something that's going to take a show that everyone has a lot of love for—but some people don't know that well. Maybe they've never even seen an episode. It's not Game of Thrones. It's not the thing at the moment. So, what could we do with no money, literally no money, that's going to somehow introduce both a new generation of people to the show as well as a nod to all those superfans out there?

So, a name generator.

Zihla Salinas: We had spent the last year working with HBO on creating more of a human voice on social media. We did "Mad Man Yourself" back in the day, so we're very familiar with how that works. But the idea here was exclusivity. That's one of the cultural pieces of gold around the show—the nicknames of the characters. And so we said, what if HBO the person was giving out individual nicknames?

In honor of the 20th anniversary of The Sopranos, I’m handing out Soprano nicknames today. Who wants one? FYI if you tell me your first name, this is way easier for me.

Wouldn't that be a more exclusive offering [than a traditional name generator]? Will that be enough to galvanize people? And it was, honestly. It just took one or two celebrities to jump into the mix. I think Lin-Manuel Miranda was the first one who jumped into it. Funny story: He was actually an extra on The Sopranos way back in the day.

So he's fond of the show, but he never got a nickname. And then it just kind of snowballed from there. We set up a command center, and we did it for 24 hours straight. We had the creatives in the room, and we were just constantly giving out these nicknames.

We had 20,000 requests. We obviously couldn't keep up with all 20,000 requests, but we had a team that was looking at the influence of the people who were asking. How do we make sure that we respond to those people so we can increase the spread of the overall execution and make sure those people get individual nicknames? And then the amount of reshares—100 percent of the people who got them, reshared them.

Gelner: The big unlock with HBO was, you've got to go from just being a place where you're distributing content and putting out show titles to giving it a personality. Our big pivot was, HBO needs to be a person, not a company. And when you start thinking about it that way, you can see how the Sopranos Nicknames would come about. What would HBO the person do at this point in time? Well, they would dole out nicknames.

Salinas: I feel like people are talking a lot about brand action. Purpose and brand action are the buzzwords. But when you think about it, a lot of brand action takes place in social, and social becomes the creative proving ground for most brands in terms of having an ongoing dialogue with people and how you behave on a daily basis when you're are interacting with fans and the community and the world around you.

A few brands have effectively navigated those waters really well. They don't need to always have these big cultural moments—they can actually just have this ongoing progressive dialogue with people. And I think that's actually modern branding. When we talk about how to build a brand today, given everything that's going on in the media world, I think those things actually matter quite a bit. So we see a lot of results for our clients who spend a lot of time and effort thinking about the brand in social and how it comes to life.

HBO also does huge things like Super Bowl ads. But these smaller moments are maybe bigger than they seem.

Salinas: It's where the rubber meets the road. You can say, in those big Super Bowl moments, we are THIS. But consumers won't believe you unless they see you behaving that way. And social is where you behave. That's where your actions come to life. On a daily basis we're constantly thinking about how does an HBO the person want to engage and how do we create content as entertaining as what's on the actual shows?

Gelner: That was the other unlock. One, act like a person and not a company. And two, you are probably the world's most esteemed content provider. Why would your social channels be something completely different? We have to aim to make sure that everything we do is entertaining.

A year or two back, it wasn't very entertaining.

Salinas: The brand channels used to just be about promo. Let's put promos out. Another show trailer. Another show trailer. Our first mission with them was, OK, let's shift strategy here because people are tuning out. Sure, they want the Game of Thrones teaser. We get it. But that's not really driving engagement. What was the difference between HBO and Game of Thrones? What was the point of having those two channels? So built the voice of HBO, and the brand of HBO, and we're doing some really exciting work with them now.

People think entertainment marketing is easy because the product is so compelling. But in fact, it's harder because you have to measure up.

Salinas: It's definitely more of a challenge. And honestly, there's a lot of very creative people that work at HBO. The standards are so high. It really keeps us sharp. It keeps us on our toes and it is a demanding thing that most people underestimate.

And knowing how to take content to market is an art form. Knowing how to take a show and make it part of the conversation, that's a skill. Especially now with all the platform wars going on. It's a really dynamic industry to be a part of right now.

Anything you've really liked elsewhere in the industry lately?

Gelner: I've always been a big fan of anything that does something right for the brand and right for the world. When it's done right, it's amazing. I think some brands aren't doing it particularly well. I feel like they're just opportunistic. They'll come out with this big, grandiose gesture, but then when you dig beneath the surface, you realize it's pretty hollow.

But you look at companies like Patagonia. Their marketing and their actions and their ads are all one, with a very clear, authentic purpose. That's the gold standard everyone should follow.

Salinas: I like the Nike stuff, obviously. I'm a big fan of bold action. Some of that work is really strong and straight to the point. I also love messages that are not overly complicated. Everyone is chasing purpose, but when it's not a clear alignment to what the brand is meant to say or makes sense for the brand, sometimes I get a little lost in the message. Nike really put their neck out there and did something that was very authentic to them. It lived up to their own story and their brand in a genuine way.