Stories from the Hennessy and Turkish Airlines films

I first started working with Ridley Scott when I was 28 years of age. At the time I was one of the youngest editors in Soho London, working with some incredible talent, including his son Jake Scott who then introduced us.

I'll never forget the first time we met; it was on an Orange campaign. Ridley sat down next to me, looked me over, I think to size me up, asked me my age and then stated, "Napoleon Bonaparte was the exact same age when he led his army into battle; so what exactly are your intentions on my film?" No one since has ever thrown down such a gauntlet to test my editing prowess. It's something that still makes me smile.

I then worked on further commercials with Ridley and was asked to work on specific scenes for Gladiator. My job was to play with the dream sequences, afterlife moments and the Leni Riefenstahl entrance to Rome. I believe that Ridley wanted a commercial editor to give the film some more bite. I went on to edit the title sequence for Hannibal before stepping into directing myself. I wouldn't say we lost touch, but I became extremely busy carving out my own career in London at that time.

Then, in 2017, I got a call out of the blue to ask if I could look at a television series called Taboo starring Tom Hardy. Ridley was producing it and was far from happy with the first pass on the edit. I came in, reworked episodes 1-4, giving time to the characters, the sound and also the otherworldly aspects to the series. This became the blueprint for episodes 4-8.

In 2018, I got another call to work on Hennessy. We shot the film early July in Prague over just four days, and then spent the next five months editing, posting and crafting the opus into an incredible ride that is distinctly Ridley Scott. In fact, Ridley had a blank canvas to create the worlds that represent the seven attributes of the drink, which is a rarity in advertising these days.

What I love most when working with the maestro is his references that can come from anywhere, such as a historical work of art or an unexpected piece of music from the 15th century; in fact, his unyielding databank of references helped shape the wood golem. A painting by William Blake called "The Ghost of a Flea," currently hanging in the Tate Britain, was his reference to help visualize this strange woodland entity to the post house.

Ridley also likes to draw everything that he is describing, which is commendable considering we are working on incredibly high-tech themes; and yet the pen is still his go-to tool.

As his editor, a huge amount of responsibility falls on my delivery, not just on picture but on the sound design as well. Ridley demands that the sound be as close as we can make it before going to a studio or composer to have the worlds fully realized so there is a proper foundation to work from; this in itself was a journey of discovery.

I spent hours sourcing classical music scores and building the worlds up with more unexpected sound design, such as elements from the Music Concrete movement of the mid 1950s, where a lot of early experimental electronica was created.

The project itself was a constant reimagining—initially I built the scenes up from studio shot references of the giants, A.I., glider and even the wood golem which was shot as motion capture. These rough timings were then handed over to MPC as a framework for their rendering.

With each render came a new set of challenges, such as unexpected re-timings of scenes or even a complete reimagining of a moment. This was consistent right up until the last minute as the edit was updated and the renders jumping in quality, depth and visual impact. To be honest, this was an staggering amount of post work and unlike anything I have witnessed on a commercial level.

Cutting Ridley's Turkish Airlines film was a different animal entirely. I was brought in to work on it while still editing Hennessy. Ridley had just shot with us in Prague and then jetted off immediately to shoot TA in Istanbul.

By the time I got involved, the edit was already up and running. However, Ridley wanted it to be tightened further and for me to play with the timeline of events within the story. The film itself is a chase through the streets of Istanbul with two female protagonists and a storyline that is incredibly tongue in cheek.

Tightening up the film was very straightforward. We got there incredibly quickly, but playing with the timeline of events was a more experimental process, where I toyed with deconstructing time and enabling the past to run in contrast to the present.

Albeit a lot of fun in deconstructing the story, most of it we threw away—if anything, it was more of an exercise in what we could do to shake up the storyline further.

Once we had explored this concept, we used this design to open the story with, which works remarkably well. The rest was a playful tour de force of two incredible acting talents that are a joy to watch on screen.

Again, with the audio, we dialed up a lot of the sound design to really punctuate the story beats, but equally to play up the flavors that make Istanbul such a striking and exciting city to be in. This really comes through when watching the film.

The new Istanbul terminal wasn't, in fact, finished during the filming, so a fair amount of post was spent on the terminal building cleanup and also the aerial arrival shot over the runway, which took many hours to get right.

Although my amount of time spent on this project was in stark contrast to Hennessy, it nevertheless required just as much effort and focus to deliver what Ridley wanted to conceive visually.

Overall, working with such an auteur is truly a unique experience and always a huge learning curve, even at my age. In fact, Hennessy was Ridley's first commercial in 13 years. Shockingly, I had cut his previous commercial—it was for Barclays Bank with Samuel Jackson. Time flies. 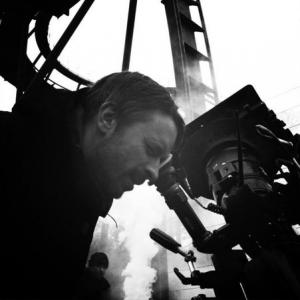