Vol. 2 gets into some searing punk rock

If Liquid Death's first album of raucous rockers from a few months back didn't satisfy your thirst for malicious musical merriment, have no fear. Today, the canned water brand drops a second collection of tortured tracks with lyrics based on the company's hate mail.

Suffice it to say, this stuff rocks harder and wetter than ever.

Musicians from Alkaline Trio, Rise Against and Anti-Flag contributed to the 14 cuts on Greatest Hates Vol. 2. They performed with suitably obnoxious post-punk attitude. And as you might guess from this cover art, these beats don't go down smooth: 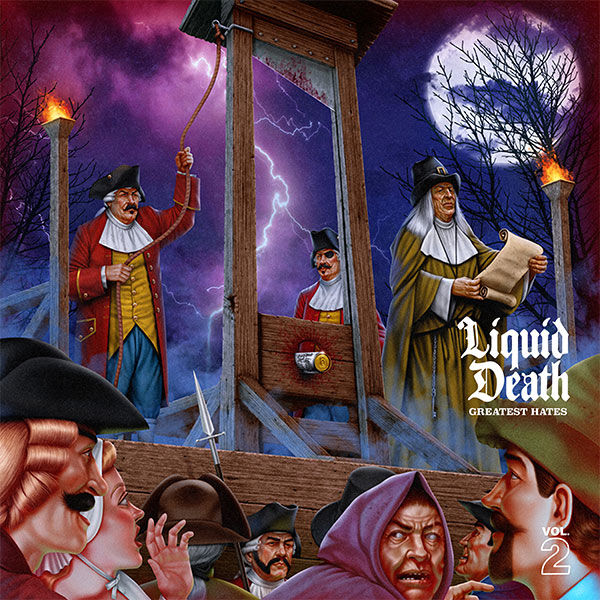 Not evil enough for you? Well, maybe this crazed commercial created with agency Party Land will put you in the mood for some ear-searing bad-assery:

So many, um, highlights … where to start?

Liquid Death co-founder and CEO Mike Cessario notes two personal faves. First, there's the album opener, "Rather Murder Myself," which he calls "super catchy while communicating some very bold hate comments, like 'just drink bleach' which is hilarious." (Note to readers: Do NOT drink bleach!)

Cessario also savors "Good Try, Devil," a mellow change of pace amid the frenzied fretwork, but no less vituperative for that:

"Good try devil but your product is for the birds.
You're trying to get these lonely ass atheists
to bond over canned water.
I can't believe Satanism is promoted by this company!

If suffering for all eternity for a case of water
is all you wanna do,
then there's just no use reasoning with any of ya'll.
Lord Have Mercy!"

You can almost see 10,000 butane flames brightening a hockey arena during the third encore, right?

Personally, we're partial to the tracks that take Liquid Death's promotional efforts to task. These include "Remove the Ad," which makes strangely specific threats such as:

"I will report you to all the government officials
if you do not take down your falsified info…
Remove the ad, and notify me,
and I won't drive your business into the ground,
for spreading false information and brainwashing."

If that's not compelling enough, "Fuck Your Ads" really drills the message home:

You can … enjoy? … the whole album on Spotify:

Liquid Death went the sequel route after scoring a viral hit with the original Greatest Hates in May.

The brand sold out of all 1,000 vinyl records at $20 each and logged nearly 200,000 streams on Spotify, Cessario reports. "People posted all over social how much they loved the album, and how surprised they were at how legit of a metal album it is," he says. (Liquid Death plans vinyl pressings for the new album soon.)

Assembling material for Vol. 2 was no problem because "we have no shortage of internet troll comments to pull from on social," he adds.

Punk songs replace the death-metal of Vol. 1 "because punk is known for being 'angry' music and fits the concept of bringing negative social media comments to life," Cessario says. "Punk actually has singing and harmonies, so you can really hear the words much better than on a death-metal album. Songs are catchy on this second record, and you can sing along with the ridiculous lyrics."

If there's a Vol. 3, maybe they'll go country and western, with dobros and harmonicas melting the plains to ash (yeehaw!) … or disco, so we can boogie all night on the glam-trash dance floors of hell.