But The Man in the High Castle sounds so fun!

Here's something fun for the kids at home! Actually, maybe not.

Here in France, Amazon Prime Video is promoting its mature series, for people aged 16+, using drawings from kids. Each child speculated what the shows are about, based on their titles, and drew them.

The resulting art—replete with sunshine and color!—is the opposite of what the shows actually contain, which handily promotes Prime Video's parental control settings. (Because no kid's ever broken those before!)

Here is Jade, charged with drawing The Boys. She draws her dad playing soccer with another chap of a different color ("... so that everybody is different!" Give Dior a call, darling!), as well as a bad guy: There's one "in every cartoon or film … but in the end, they lose, and the good guys win," Jade explains.

It's that winning naïveté that makes advertising with kids so charming, isn't it?

Marilou draws The Man in the High Castle. We particularly like the inclusion of the diamond defenses, and confetti as a physical manifestation of magic. (Glitter, we imagine, would be its evil mirror self.)

Don't anybody tell this kid about Hitler—or well, maybe wait a year or two.

Lastly, wee Thiago is assigned Carnival Row. "I've drawn fireworks to show it's a party," he says of what, in truth, is a show about the bleakest "carnival" of all time.

The "Parental Control" campaign went live across social networks on July 7, and is supported by outdoor ads with the children's drawings. Other Prime shows replete with dystopia, sex and violence of all sorts include Fleabag and Jack Ryan.

Check out the OOH goodies, which juxtapose speculation and reality, below. 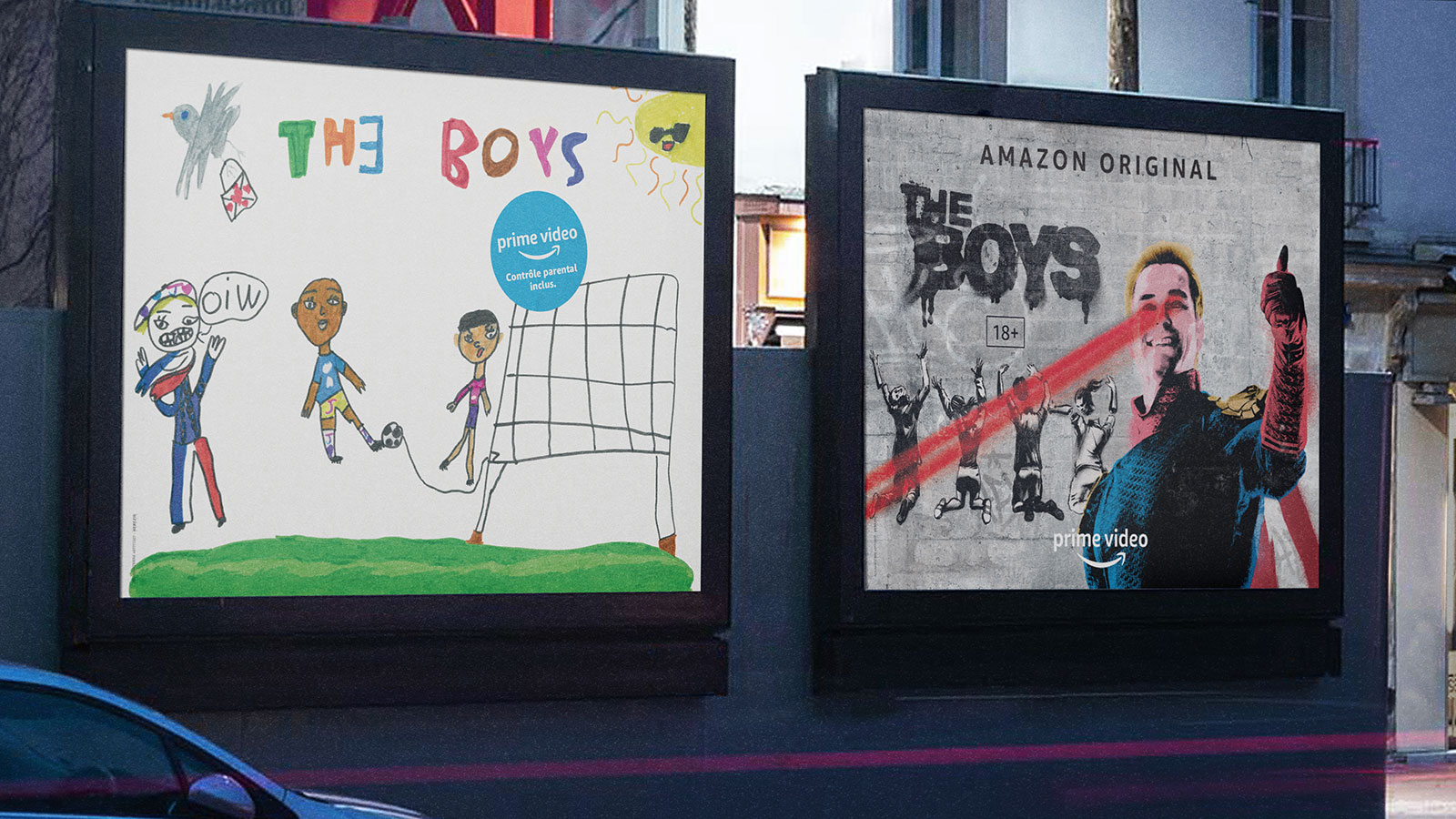 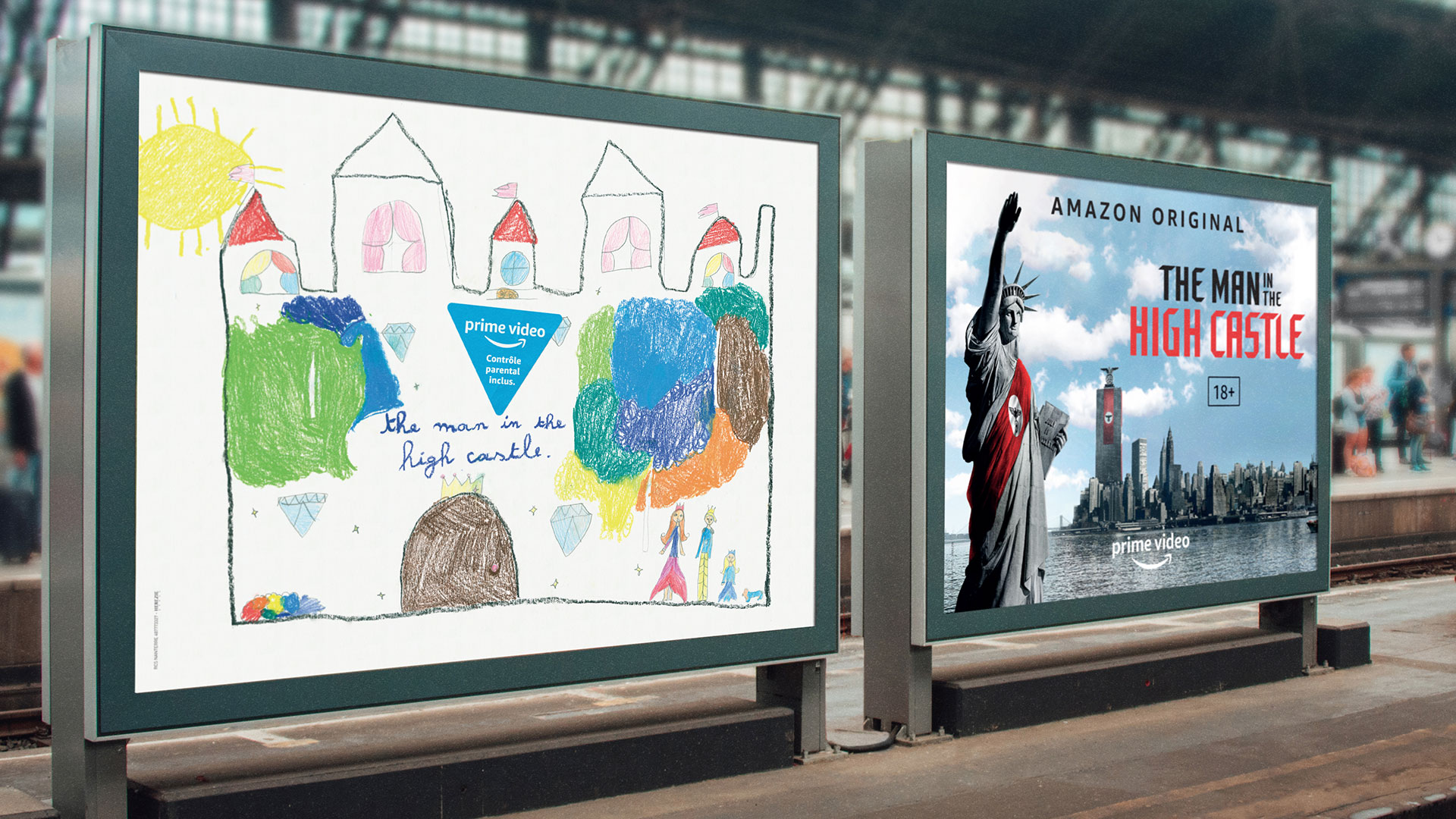 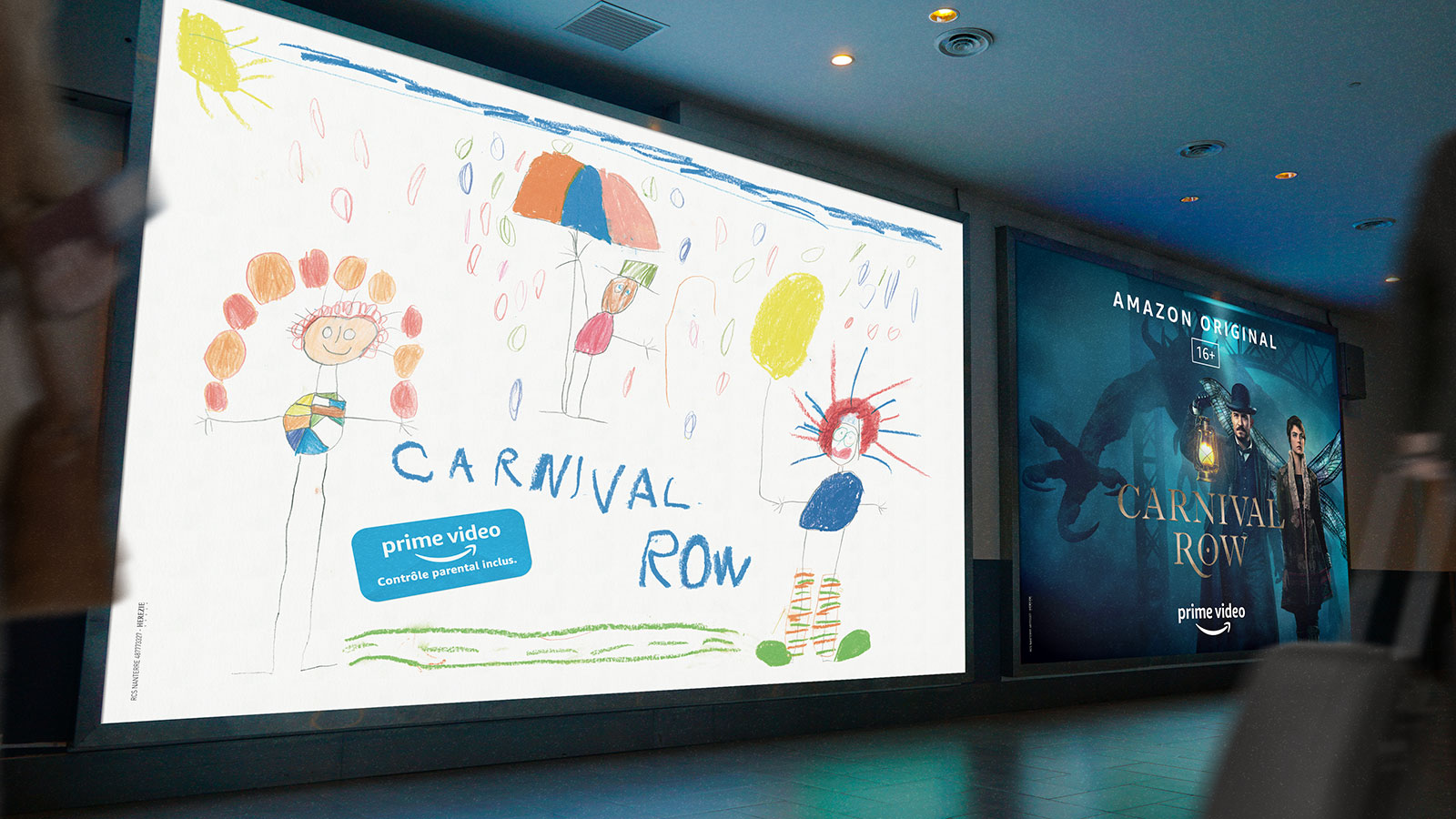 "Behind the creative process of promoting [its] Originals, Prime Video reaffirms its position as a responsible brand, preferring that certain content be imagined, rather than watched, by children," say the executive creative directors, Etienne Renaux and Paul Marty, of Paris's Herezie Group, which conceived the work.

"Children spent more than an average of seven hours [per day] in front of screens during lockdown, some of whom must unfortunately have been exposed to potentially dangerous content. We wanted to remind people, using humor, how important these settings are.''

Since we're talking about responsibility, we'd be remiss if we failed to mention that, a year ago, Herezie was at the center of the French #MeToo movement, having in its employ the creative director Baptiste Clinet, a former Ogilvy employee accused of multiple assaults on women. Two Herezie women were at the center of complaints about Clinet's behavior; Herezie fired them and defended Clinet.

In February, French advertising publication Stratégies ran a piece about how #MeToo panned out, one year later. Herezie's founder and president, Andrea Stillacci, reports having worked with a company called Be One Too to individually interview all agency members and conduct workshops on topics like "the difference between flirting and harassment." Stillacci praised the events of the past year for "initiating internal conversation."

He added: "This affair had no business impact; though some brands were curious, it never went further than that. Au contraire, the agency's had a great start to the year."

Executive creative direction is now led by Paul Marty and Etienne Renaux. The creative team for this particular work included no women, except for little Marilou and Jade, credited as "very junior art directors."

While that's unfortunate, and Stillacci's comments are depressingly callous at best, that remains typical of advertising at large, especially in France. And it seems like an effort was made to make "Parental Controls" inclusive, even if its credits are not.

When that changes, it will be evident that Herezie has, too. In the meantime, fine work on Prime Video. Don't forget to keep doing that work in-house.