'Myth of Dior' Is a Sublime Vision of Unrelenting White Supremacy

Even fantasy worlds are not exempt

Last Monday, the talented Maria Grazia Chiuri released her latest haute couture series for Christian Dior, the Autumn-Winter 2020-21 collection. "The Myth of Dior," directed by Matteo Garrone, is about 10 minutes long without credits and is a sumptuous, fantastical feast.

So let's just get this out of the way: It's hard to get over how white it is … and not just how white it is, but how it renders whiteness ethereal, luminous and divine. When you are not white, this fact is literally impossible to ignore.

Now that we've said that out loud, let's shelve it for a minute and dive into the detail of this work because it is beautiful, and that's part of what makes that last point a shame.

It isn't possible to do runway shows right now, for obvious reasons. So Christian Dior looked to a great piece of inspiration, to understand how the gospel of fashion can go on propagating: the Théâtre de la Mode.

After World War II, France was utterly destroyed and economically ruined. The center of fashion moved to New York, and the country's artisans and couturiers were all out of work. So the big fashion houses got together and conceived a weird idea: the Théâtre de la Mode, or the Fashion Theater. They took their best designs, then crafted them onto a series of dolls—er, mannequins.

This tiny theater toured Europe between 1945 and 1946, followed by the U.S. People were wildly impressed by these intricate works of art, and major fashion consumption returned to Paris. It happened so quickly that the dolls were still touring the U.S., so Paris was like, "Eh, keep them." They are now part of the Maryhill Museum of Art's permanent collection.

It's a cool story, and this podcast episode will walk you through it in better detail than we can. One scene feels like particular inspiration for "The Myth of Dior": The Enchanted Grotto, recreated around 1990 by Anne Surgers, and featuring the original clothing and mannequins in a complete framework designed by André Beaurepaire: 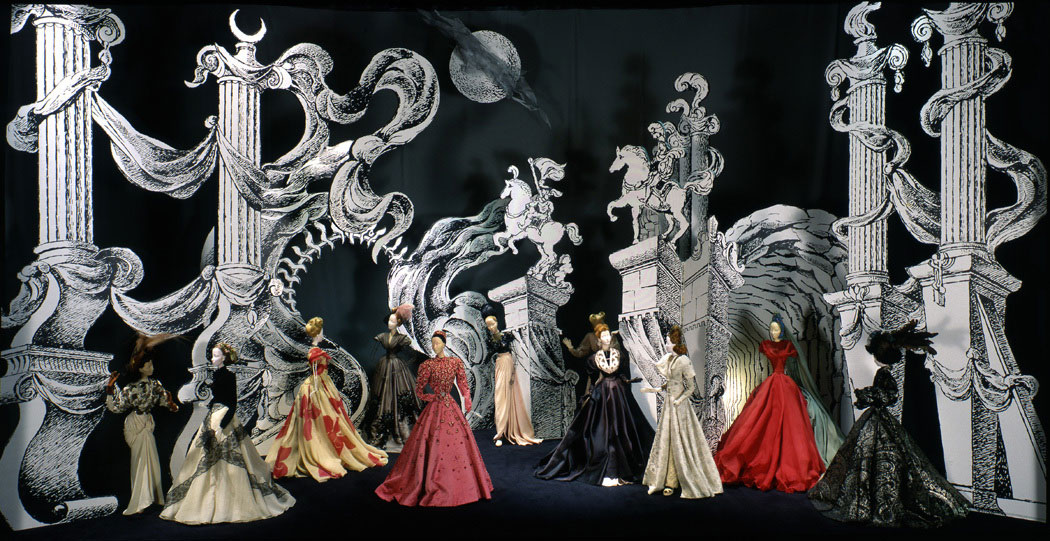 Image courtesy of the Maryhill Museum

Garrone shot Dior's film among ruins near the city of Rome, Italy, and it features a cast of nymphs, mermaids, fauns and other mythical creatures, including a snail woman, a woman made of stone, and a dryad making out with a dude like they're on the set of Grease.

The triumph of this work is its attention to detail, and how deeply it resonates with tales that form the bedrock of our culture. The nymphs in water recall many old myths: Pharaoh's daughter was bathing with her handmaids when she found baby Moses in a basket. Princess Nausicaä of the Phaeacians was washing clothes on the shore, surrounded by other women, when she encountered Odysseus.

And there are many old stories of women bathing in lakes and streams, only for a hunter to spy them, steal the clothes of one, and force her to marry him. (Even fictions, examined beyond the "heroes," are replete with men being rapey, which speaks more to the norms we've decided to let harden into reality than to some inherent beastliness in men that women should always monitor for. But that's something for another day.)

In any event, all the mythic ivory ladies of Dior's fantasyland are interrupted by footmen carrying a dollhouse-shaped trunk, which opens to reveal the couture house's take on the fashion theater, whose painstaking quality we were able to examine in the opening, a workshop scene.

This is probably a bad time to mention that while Dior's designs are still hand-created in Paris, the vast majority of the workers are young, worked to the bone-bits of their fingers, and underpaid. But the scarcity of these kinds of opportunities always earns such banal abuses a pass.

So let's return to details without getting distracted by details. The mossy, sun-dappled rocks evoke a truly tangible sense of place as the footmen scuttle through with their dollhouse-shaped litter. There's even a Narcissus, who briefly looks up as they pass, then returns to gazing winsomely into himself—a proper addict! Don't tell him about smartphones.

"Only Narcissus, incapable of detaching his eyes from his own reflection in the river, is disinterested by the clothing that passes him by," writes Godfrey Deeny, "a feminist commentary on masculine vanity."

Maybe. The women make their choices, and we're sent back to the workshop, where tailors make big, sumptuous versions of their smaller creations. The last few scenes treat us to the dresses in the wild—strange and gorgeous shots that illustrate how well-suited they are, not only to their bearers but to the very way the latter live and move.

"The Myth of Dior" is one piece in a constellation of presentations slated to appear during the all-digital Paris Fashion Week, and it's likely to be a highlight of the overall show, providing a beautiful framework for how haute couture can be presented outside of a runway context.

But again, can we not do the creepy "White is the most sublime of all the skins" thing? The last 10 years has seen entertainment become more diverse, which only makes choices like this harder to ignore. Benetton's own Oliviero Toscani spent his entire career decrying these types of brand decisions, which he felt are, by their very nature, political.

"Where are the pimple-faced teenagers, the immigrants, the accident victims ... ?" he once opined. "They've been replaced by Claudia Schiffer, the embodiment of beauty in all its wholesome, blonde, rosy, Aryan perfection."

A common rebuttal to this is, "But Europe is a white continent." It is not. When Toscani returned to Benetton in 2017, the first image he showcased was of kids at an Italian primary school: "28 schoolchildren from 13 different countries, and four different continents," he said.

And for anybody who goes all O-face to defend the work as some kind of authentic historical reflection of "a time and a place," let's end that myth right here. To begin, "The Myth of Dior" isn't Spartacus. And if it were, it would still need to look a lot less like it does.

The world of ancient Rome was quite multicultural, and skin tones varied widely as countries interchanged, mixing not only people but mythos. The idea of white purity as dominant in these stories is utterly modern, and comes partly from a misunderstanding about antique statues, which historians mistook as being intentionally pure-white up until pretty recently, when we learned they were elaborately painted and allowed for huge skin tone variations.

I know a lot of people are over what they derisively call identity politics ("Can't we just enjoy anything anymore?") and believe me, I'd like to enjoy things too without seeing a social media polemic that gets my blood all hot and spiky, every day. But it is important to emphasize, again and again, that representation, including the way we represent fantasy, is important, especially at this scale.

It makes people feel more or less real. It tells you what is and is not desirable.

And among the greatest propagated sins of the fashion industry (there are many) is the notion that in order to embody luxury, you have to resemble something very specific—something that, biologically, will never truly be possible for you. Body types are certainly part of this, but whiteness is also a huge aspect.

It is one reason skin-whitening creams and soaps are a billion-dollar business in Africa, the Middle East and Asia, and why the recent decisions by Johnson & Johnson and L'Oréal to de-emphasize the language of beautifying whiteness in products matters, even if a lot of people think it's stupid. Having grown up in a house where my parents and relatives spent a lot of time and money finding whitening solutions for my skin, let me tell you it is not.

We don't have to bash one another over the heads with identity politics. But making a world that feels kinder, and richer in sustainable bounty, is something we have to do together. That doesn't happen until our neurological or biological attributes are not touchstone reasons for our lives to be better or worse while living in community.

That doesn't mean we can't have fashion, or fantasy. All it means is that the stories we tell in community are part of the norms we define, how we signal who is welcome and who is not. We should recognize and use that power consciously. And we have many examples that demonstrate stories are better when we divorce ourselves from the harmful, utterly incorrect notion that white is the norm, and also aspirational.

Let it go. Because that time is over.