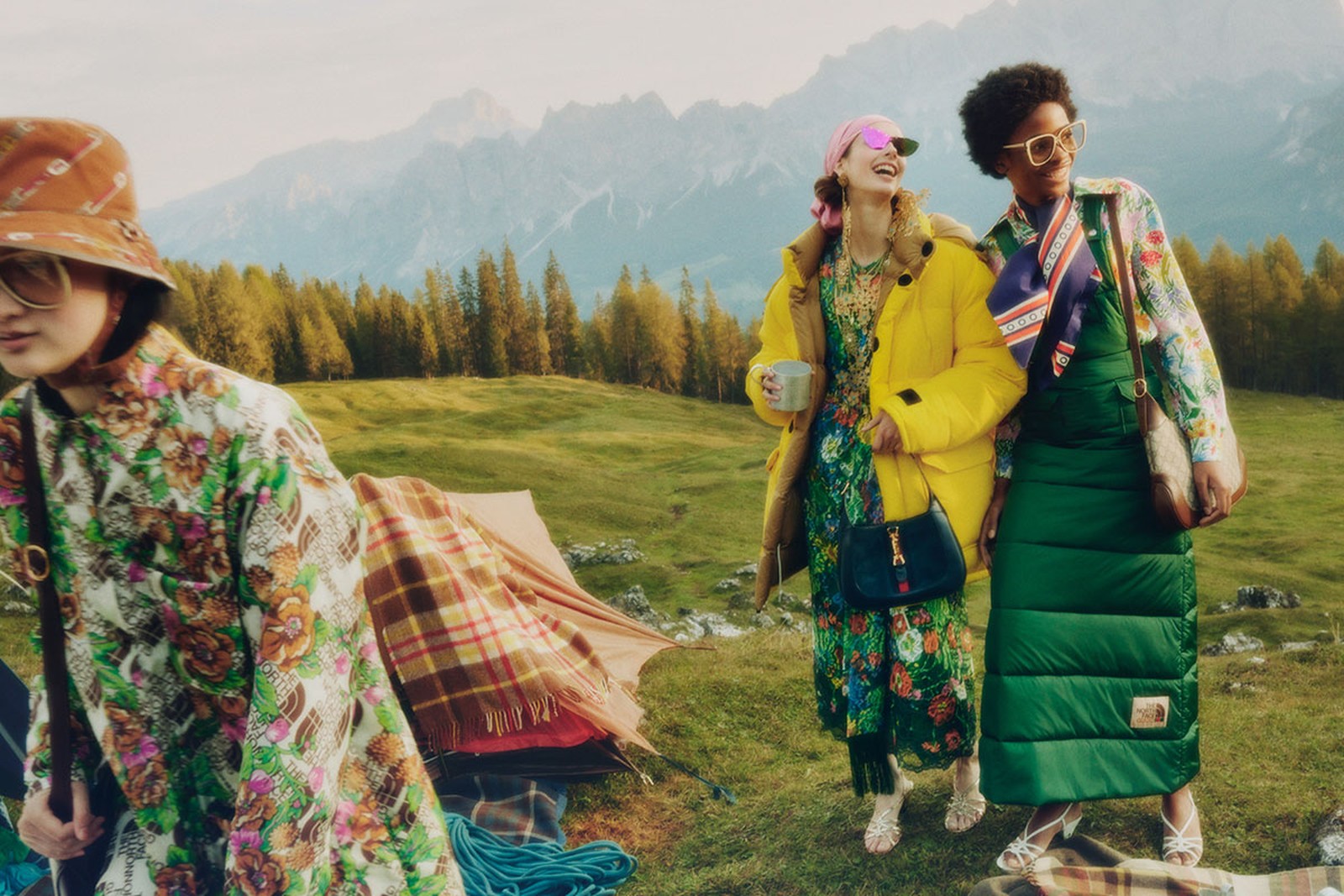 One effect of a year wracked by lockdowns and remote working is that people have begun to leave cities in great numbers. "Cities are obsolete now," a couple of friends smugly told us from a country house they purchased, which is four times bigger than my apartment … and probably four times less expensive.

With those migrations come fantasies about a different kind of life—a simpler one, where you work fewer hours and otherwise "rough it" a bit, building indoor fires with real wood, and surveying all that yard space, where your hypothetical dog can have a poo and you won't have to clean it up, because it is not a public park.

For those still inclined to romanticize this idyllic escape from the citadine trap, there is The North Face x Gucci. Gucci teased the collabo a couple of months ago in a mysterious, but dreamily rugged, series of Instagram videos—a back-to-basics camping fantasy for people who, two years ago, were more the glamping-kind.

This marks the first Gucci collaboration under the tenure of creative director Alessandro Michele, who's been slaying since he arrived, making the brand feel accessible without compromising the fact that it is, ultimately, fantasy.

Luxury's always been about punting a fantasy. But Michele's understood something critical: Fantasy that's whimsical and earthy is easier to swallow right now than overproduced, Versailles-caliber productions.

Last October he promoted Gucci's fall/winter 2020 lineup by sending locked-down models a bunch of clothes, and letting them film themselves however they liked to a unified soundtrack. It captured a relatable sense of that gone-to-seed strangeness many of us have experienced, stuck at home, looking for ways to entertain ourselves. And for the holidays, he fed us a warm and kitschy nostalgia.

This approach—toning down the aspirational quality of luxury—resonates for those of us who can't be bothered to aspire to much right now besides surviving the next couple of weeks, with or without pants.

The release of The North Face x Gucci keeps deft fingers on those fine notes. The collection is muted, with a playful and jaunty Wes Anderson aesthetic, more Moonrise Kingdom than Louis XVI. Those pops of charming mismatched color read less like rigid couture and more like dress-up in kindergarten, which has pretty much been a #mood since the first lockdown.

The collection "celebrates the spirit of exploration," per Gucci's Instagram, and features easily mix-and-matchable items like duvet-sized winter jackets, a jumpsuit, and backpacks of ECONYL, a nylon fabric made of regenerated materials like fish nets, carpets and other scraps.

Also, tents! The tents are ace, and decorated with a combination of both logos.

The most recent addition to the collection is a partnership with Niantic's mobile-based augmented reality game Pokemon GO. From Jan. 4, T-shirts, hats and backpacks from the new collection will be availed to players at over 100 PokéStops worldwide.

Avatar items inspired by pieces from #TheNorthFacexGucci are on the way! Starting on January 4, T-shirts, hats, and backpacks based on the new collection will be available for a limited time at over 100 PokéStops around the world. Learn more here:https://t.co/rDsptQJMAA pic.twitter.com/QhlZ3nkJb9

The collection is flanked by local promotional installations, like a gorgeous #GucciArtWall in Hong Kong that gives city life a splash of vivid country color.