Grownups have bad dreams, too 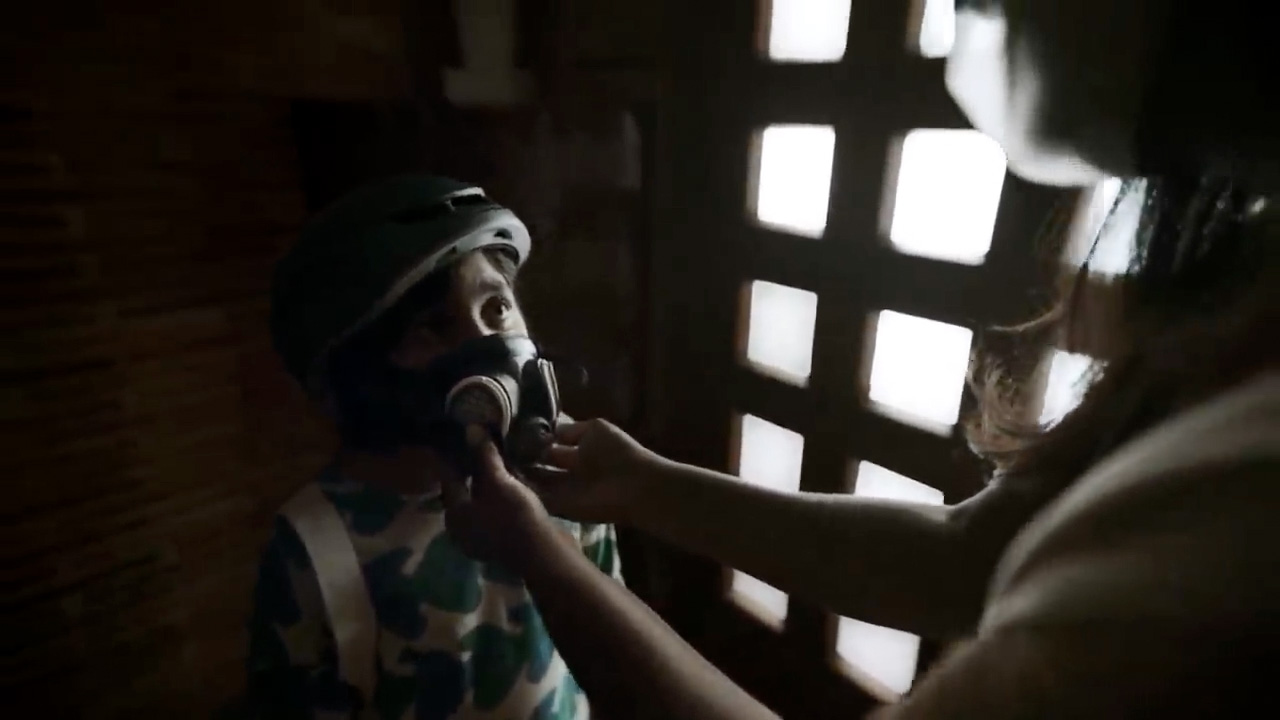 In the first ad, "The climate crisis is a child's rights crisis," a woman has a nightmare, where she puts a gas mask over her child's face before sending her into a world gone opaque. Later, she dreams of delivering a cake—topped with what looks like a burning forest—to a party, where the birthday boy struggles to breathe as he tries blowing it out.

The climate crisis is a child right's crisis | UNICEF

"The world is in a water crisis" depicts a father in a similar state. He enters his kitchen and picks up a reusable water bottle, whose logo of the planet appears to be melting. When he tries turning the tap, it releases an emphysemic cough and yields nothing. His son tries turning the taps himself, to no avail.

The world is in a water crisis | UNICEF

The ads are surreal, but also visceral. Directed by Thessa Meijer, who specializes in psychological horror (and drew from such inspirations as Get Out and dystopian Korean cinema), they do a powerful job of encapsulating the clammy terror of climate catastrophe. This is compounded by a subtle truth: Adults have become so overwhelmed by tardiness in addressing this problem, and so paralyzed by hopelessness, that our inability to move forward or backward has placed children in the position of having to comfort and take responsibility for us.

Each work depicts a parent dreaming about their own helplessness against the collapse of a habitat their kids will go on living in. There's a powerful symbolic surrender here—the mother offering the cake of burning trees, like a poisoned gift; the father surrendering space at the sink, as if his son can perhaps find a solution that escapes him.

That subconscious anxiety bleeds into reality. Subverting the TV trope of the kid who has a bad dream and crawls into a parent's bed, it is the parents who wake and crawl into bed with their children, who comfort them. Their grave thoughts, a closing narrative over their parents' sleeping bodies, conclude the ads.

"The climate emergency's already here and happening," says the girl at the end of the first ad. "But I don't want my mama or me to be scared for our futures. I want kids to sit down with governments and businesses to make big changes."

It feels distinctly millennial to address anxiety head on like this: the signature of a generation, and of a time, where talking about mental health is encouraged. UNICEF takes it an extra step, addressing millennials as adults. We recognize the affordances of our peers—like inox water bottles—but we look less like a distinctly hip and affluent marketing demographic and more like a group that's entered another lineage: parents.

Parents wrestle with responsibility over lives not their own, while knowing that a child's larger fate is not up to them—paradoxal sensations that can be paralyzing, but downright damning when scaled to the thought that those same kids might be climate refugees by the time they're our age.

But UNICEF seems to be making it clear that it's not sympathizing with us, actually; it's sympathizing with our kids, who have effectively become our parents in this crisis. Children caress their parents in beds that are still child-size. In their conclusions, they contemplate solutions to comfort their caregivers. It's our version of Sally Draper in Mad Men making French toast for her dad.

We're reminded of Greta Thunberg, standing (yet again) before an audience of fawning adults at the 2019 UN climate action summit in New York: "This is all wrong," she said with a grimace. "I shouldn't be up here. I should be back in school on the other side of the ocean. Yet you all come to us young people for hope! How dare you. You have stolen my dreams and my childhood with your empty words … and yet, I'm one of the lucky ones."

When did our anxieties become stronger than a collective sense of accountability? When did we cede the hard calls to kids still young enough to trick-or-treat?

UNICEF only lets that weight sit on those kids for a moment, long enough for us to feel it, before putting it appropriately back in the hands of adults: "UNICEF will help us do it, with your support," that little girl says.

The video campaign went live on Oct. 31, coinciding with the first day of the 2021 UN Climate Change Conference (COP26) in Glasgow.