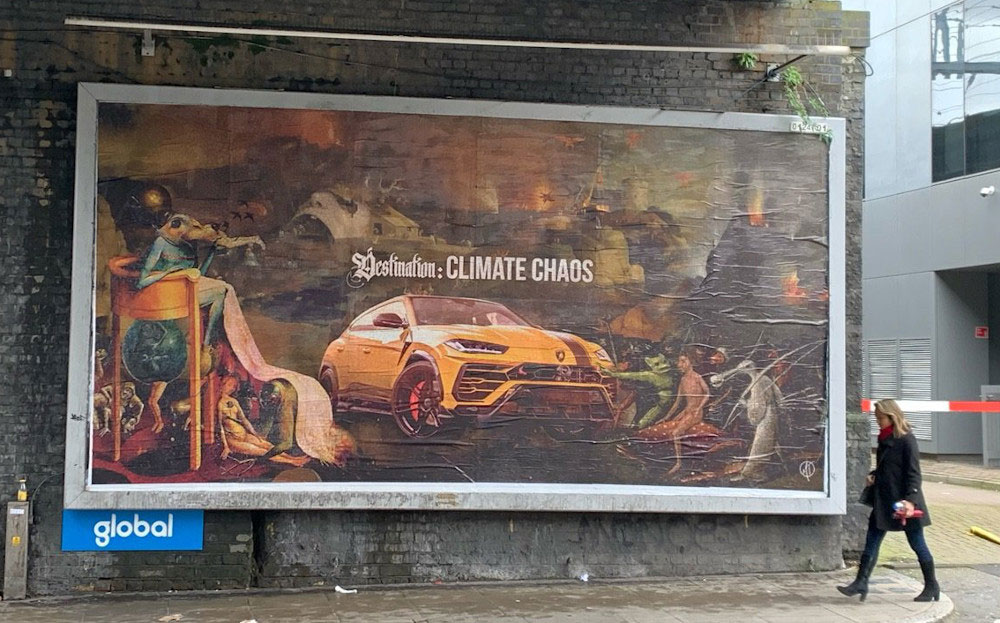 Brandalism, a guerrilla environmental group that subverts advertising tropes, just installed more than 100 billboard and bus-stop ads across England and Wales. Their mission: to key the crap out of SUV advertising.

In the video below, Tylicki elaborates on her contribution, which features a Lamborghini Urus, "the most excessive supercar SUV," sitting pretty in Hieronymus Bosch's Inferno.

"Car commercials are made to inspire wanderlust—all the epic orchestral music and dynamic landscapes you can only explore by car," Tylicki says. "My pieces are about being wander-lost, lost trying to chase this feeling of discovering that natural world. Because, in the case of super SUVs, you're simultaneously contributing to its destruction."

The goal of #AdBrake is to awaken people to the corrupt fantasies that drive car culture. "Car adverts promote private car ownership as a status symbol," says Peter Marcuse of Brandalism. "Themes of power, success and social status are mixed with exotic locations and empty roads to promote a myth of freedom and mobility. The resulting problems of traffic congestion, worsening air pollution and climate breakdown are left out of these glitzy ads."

Another poster, by Birmingham street artist Fokawolf, draws inspiration from the cheaper, more direct sales-inspired ads that litter freeways the world over. It reads, "Ignore the Kids, Burn the Planet." There's a dream worth fueling! 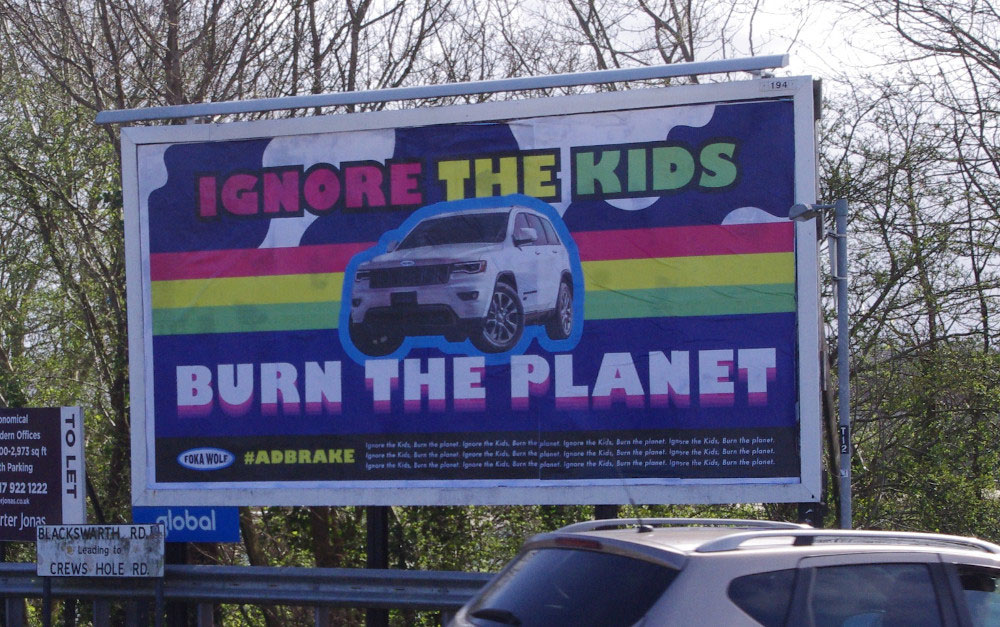 Here's a video featuring a contribution from OneSlutRiot, who talks about how gender stereotypes play into car culture advertising:

Other artworks reference Covid-19 efforts to reallocate urban road space away from cars, the better to facilitate walkers and cyclists, or point to the bailouts car companies in the U.K. received without social responsibility incentives. (In fact, despite efficiency efforts in the U.K., road transport emissions have gone up.)

Per Brandalism, the motor industry is the seventh-largest sector that uses outdoor advertising in the U.K. While politicians recognize air pollution as a "public health emergency," the governmental budget for additional road building totaled £30 billion (nearly $40 billion) in 2018.

#AdBrake builds on efforts made by environmental organizations, including New Weather Institute and Possible, to ban advertising for SUVs, which emit four times more CO2 than electric cars. They are also larger and heavier than standard cars, which dramatically increases their negative environmental impact. As Tylicki observes in the video featuring the Urus, "Advertising such luxury commodities plays into the issue of buying social acceptance. No one needs such a machine. They're buying respect from materialism."

So-called "Adblock" groups have also cropped up, with residents in Leeds, Birmingham, Bristol and Cardiff working to block planning applications for new digital advertising screens. Some launched an Adfree Cities initiative, observing that outdoor advertising makes inequality worse: heavy road networks, which tend to have the most outdoor advertising sites and the worst air quality, typically run through poor neighborhoods.

"Outdoor advertising billboards are used to promote new cars to motorists stuck in traffic. It's absurd," Marcuse says. "Our towns and cities have become so dominated by private cars that we're struggling to implement sustainable alternatives as the health and social costs mount. The active promotion of polluting vehicles through advertising campaigns isn't helping the situation. We need a cultural shift away from cars."

The #AdBrake posters were printed and installed by Brandalism members in Birmingham, Bristol, Cardiff, Leeds and London. Check out more posters below. 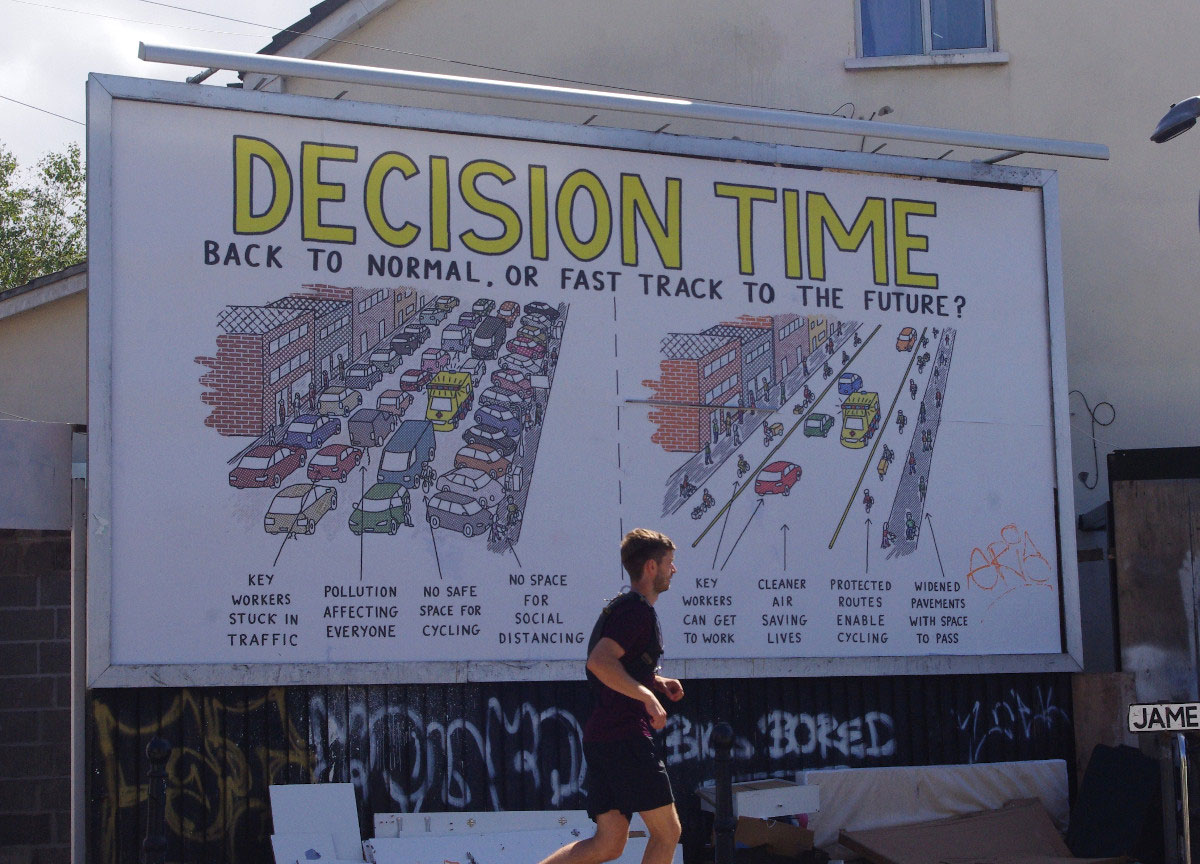 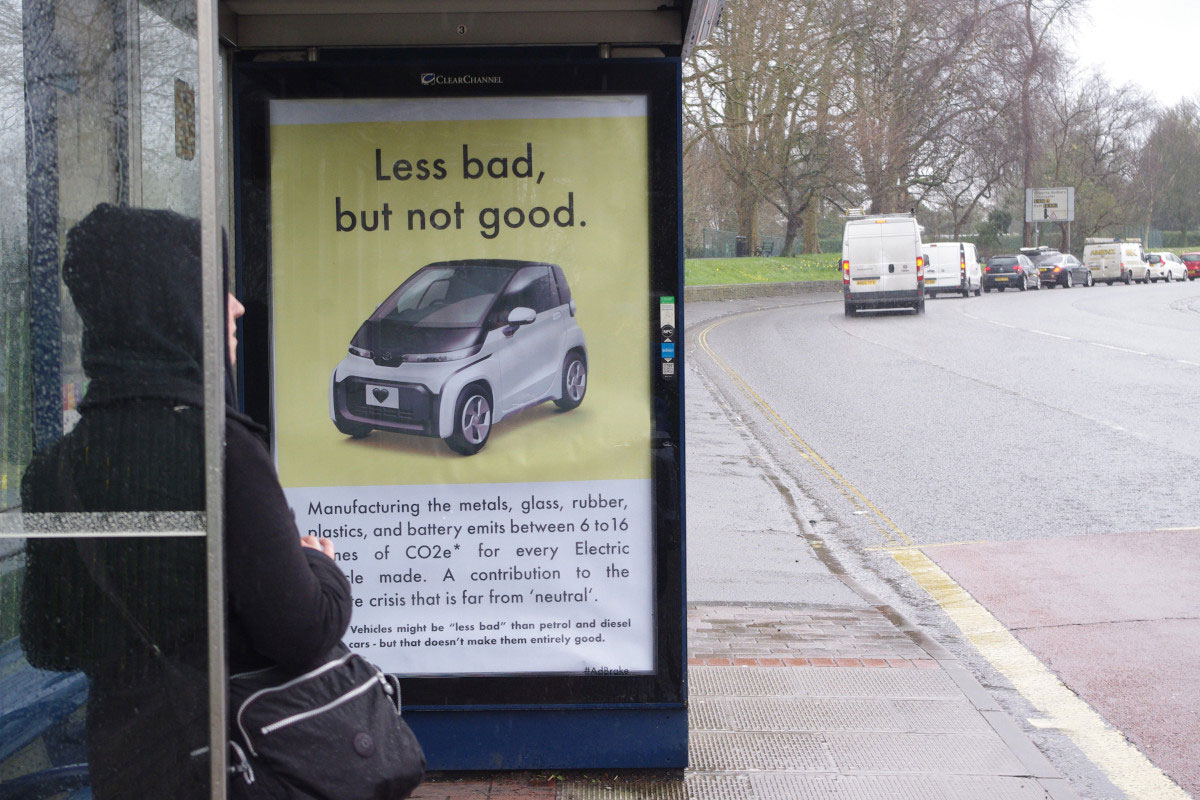 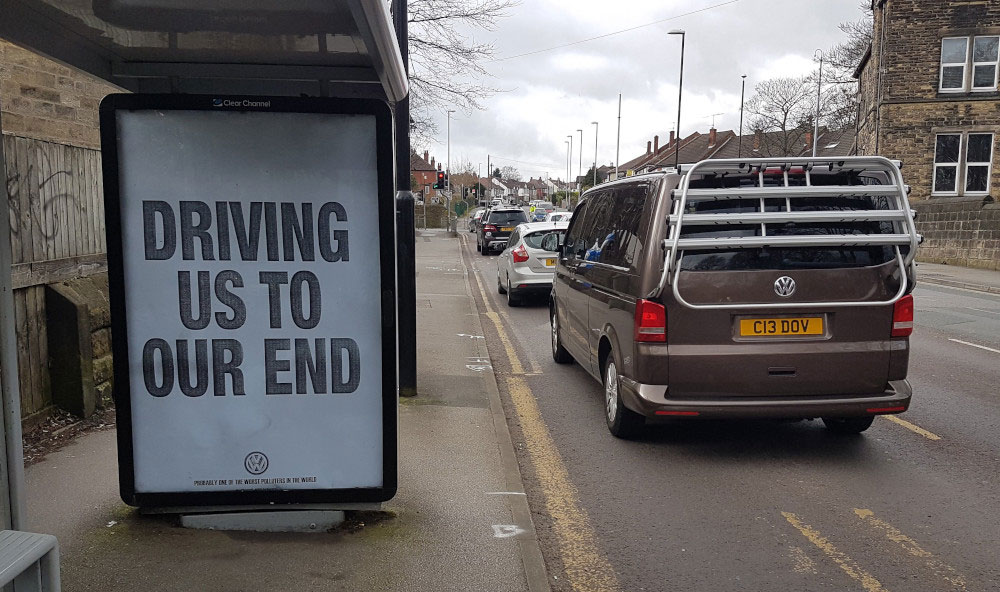 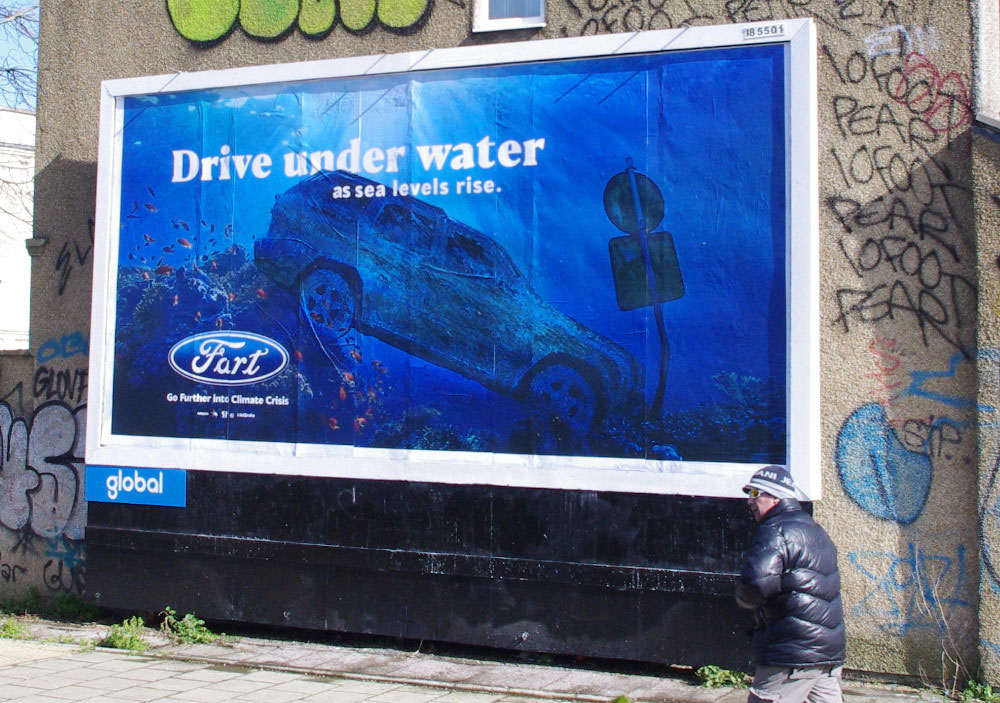 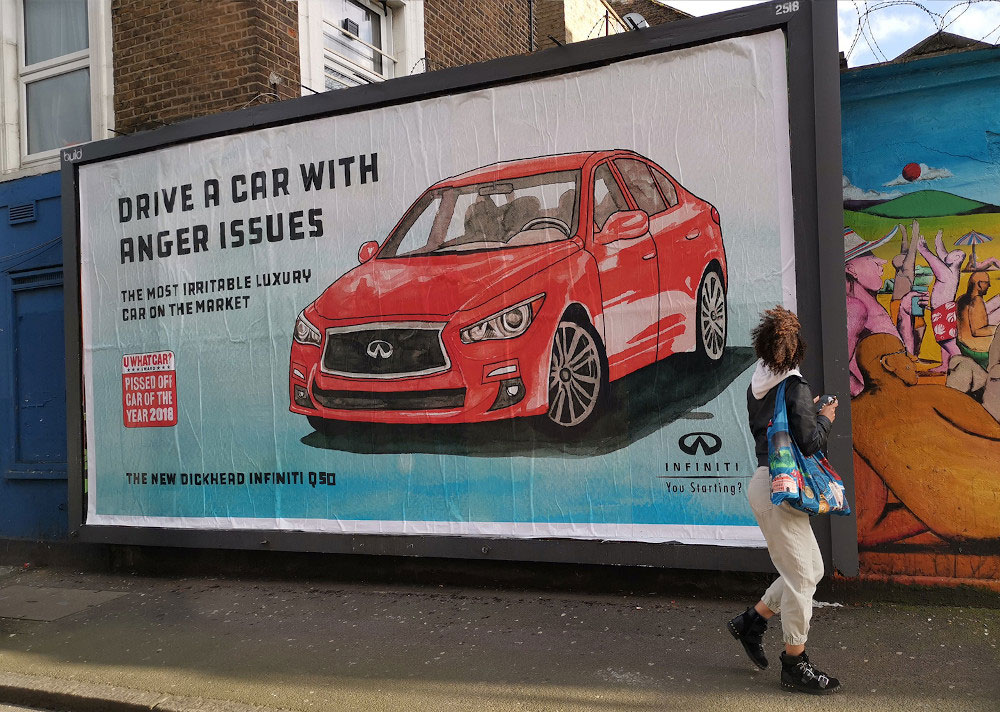 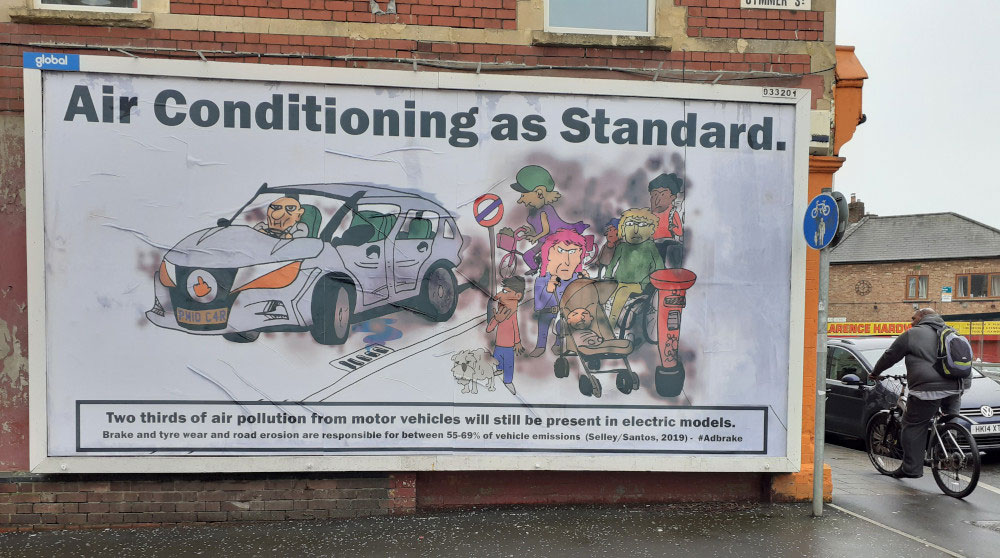 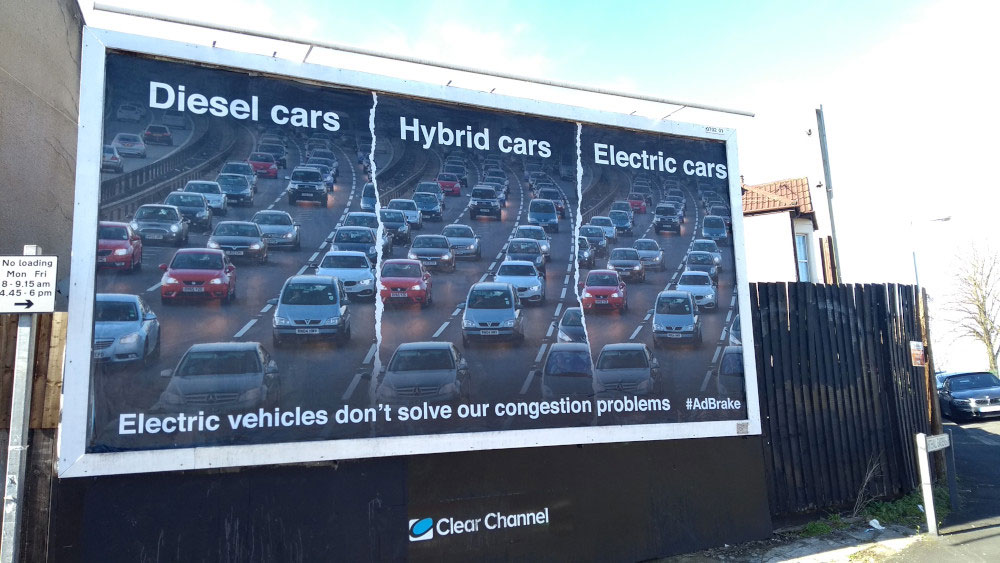 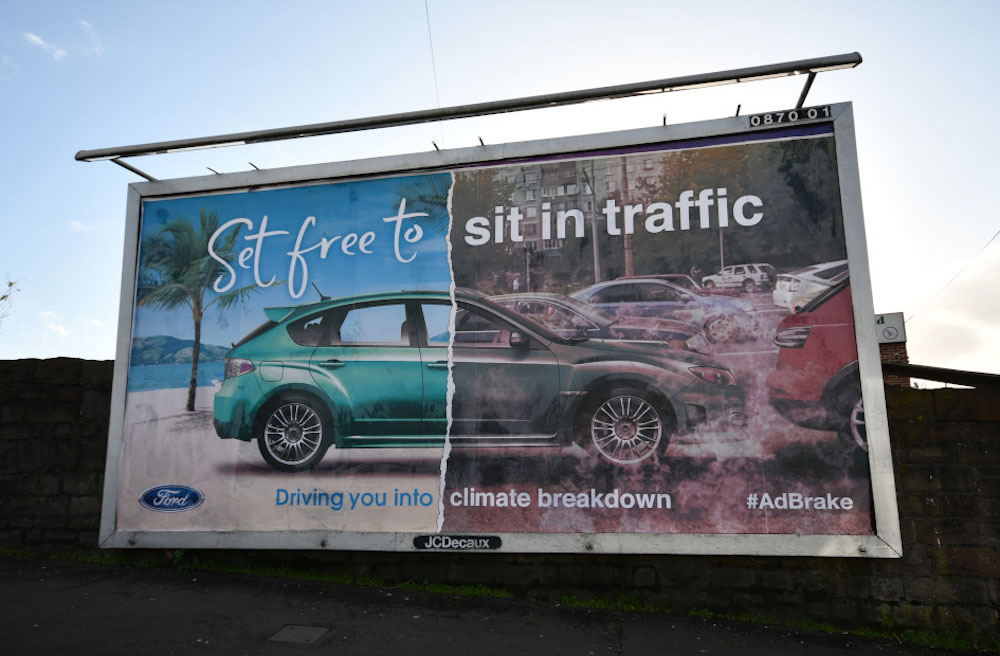