Burger King Had an A.I. Make Its New Ads, and They Sure Are Strange

A roommate of mine in college had the Talking Moose on his Mac. The primitive A.I. would pop up now and again and say witty things to you. You could also type in words for it to say. We even, regrettably in retrospect, had the Moose record our outgoing answering-machine message for us.

A quarter-century later, despite all the advances, A.I. remains somewhat primitive. Alexa has a rough time with any kind of complexity. And the A.I. who created Burger King's new ad campaign isn't really that far removed from the Moose—it even sounds like the Moose. But BK is forging ahead anyway, giving a robot free rein to create its new commercials—more than 300 of them, according to the brand.

The results are ... well, mixed. Intentionally so. See below for examples.

So, clearly the whole thing is a gag. It's unclear whether any of this A.I. experiment was real, or just a painstakingly crafted piss-take on what A.I. experiments often produce. But regardless, the spots will air on national TV, the brand says—humorously undercutting our culture's obsession with artificial intelligence, and also wryly referencing the fear within the ad industry of data and A.I. pushing creativity and intuition to the side. (It's worth noting that it's also not that different from real A.I. experiments in advertising—for example, the fake Doctor Fork pizza ads that Google's been quietly testing on YouTube.)

The flubbed execution of the BK spots is amusing, with the A.I. consistently mispronouncing Burger King as "Barger King," or "Burglar King," or "Burger Thing." At one point, "Have it your way" gets mangled into "Have it Uruguay." The A.I. also spits out lines like "Tastes Like Bird," in describing the chicken sandwich, and "Eat the Math," to communicate a good value. And of course, if it weren't already obvious, the robot feels it necessary to point out whenever the "BK logo appears!"

The spots will surely get attention, and they're weird enough to reward repeat viewings. (The campaign is also a bit of a Trojan horse. As weird as the voiceover is, the visuals are traditional—thus, it's a clever way to actually get you to watch a load of product shots.) The A.I. theme, too, is apt coming from BK, which won scads of industry awards for hijacking voice assistants just last year with "Google Home of the Whopper."

The gag extends to the press release, in which BK claims it is "testing a BETA version of a new deep learning algorithm that could give a glimpse into what the future of marketing and communications could look like." (Thankfully for human creatives, it seems to be extremely BETA.) "By tapping into A.I. to create a new advertising campaign, the brand is developing an innovative business model called Project: AOR, moving from the traditional Agency of Record to an Agency of Robots," BK adds.

That will be sobering news for David, BK's longtime creative agency. David, however, is credited with working on this campaign—so we can take some comfort in knowing that BK's H.A.L.-esque robot worker has not yet completely vanquished the Miami agency and its all-too-fallible humans en route to total BK account domination. 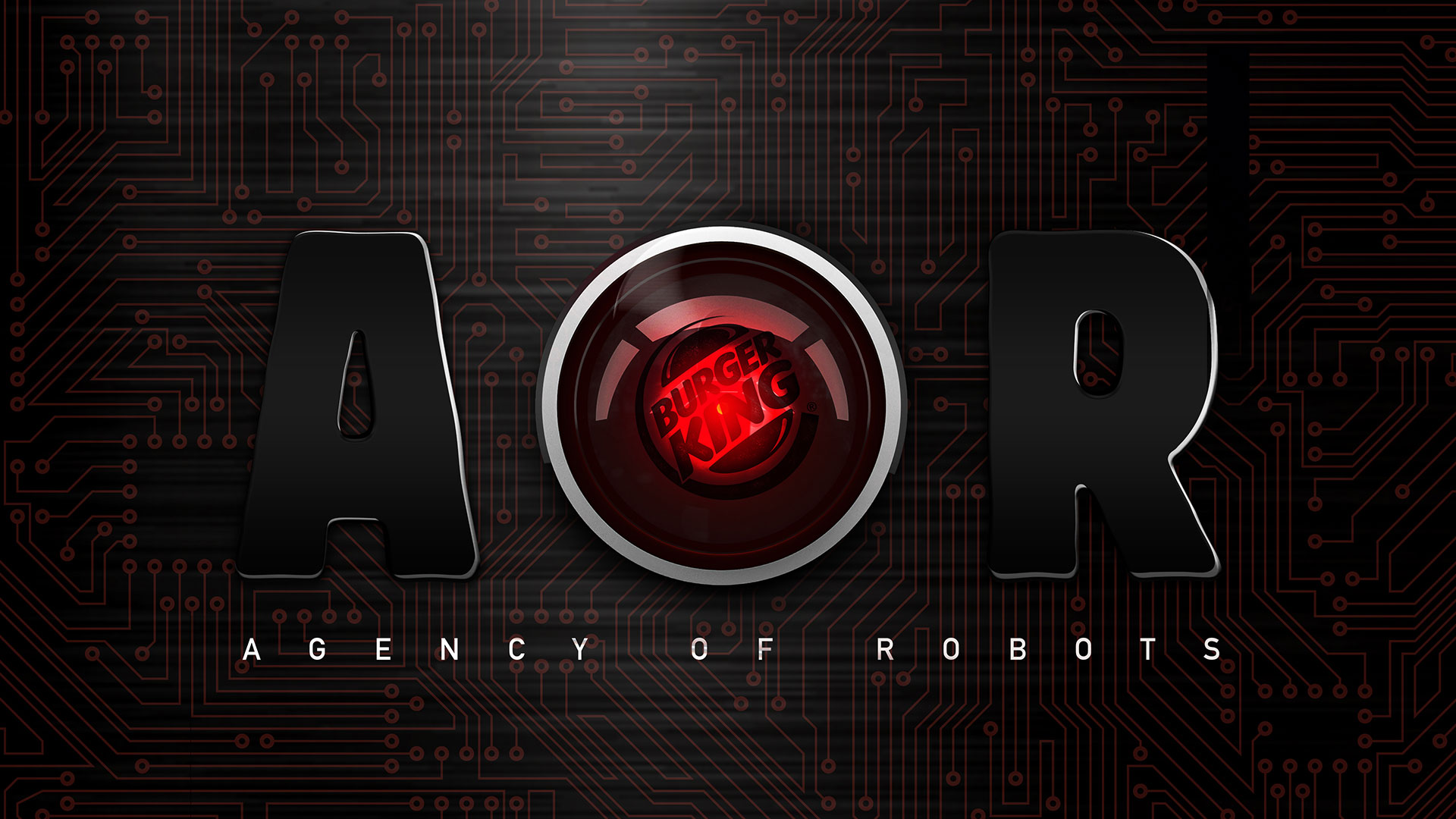 Here's the rest of the press release, which itself seems to have been written by an A.I., given the odd turns of phrase.

Artificial intelligence is having an increasingly relevant role in many industries, and creative advertising isn't the exception. That's why the Burger King brand decided to use high-end computing resources and big data to train an artificial neural network with advanced pattern recognition capabilities by analyzing thousands of fast-food commercials and competitive reports from industry research.

With the data provided, the algorithm was able to discover intricate patterns and gather insights for strategic and effective communication. The artificial neural network is a complex software architecture that essentially simulates how a human brain operates, allowing the A.I. to not only recognize patterns, but also identify which of these patterns are more successful towards a given goal.

For this pioneering campaign, over three hundred unique commercials were created and tested in focus groups. The final scripts will be premiered on October 1st. They will be the first ads entirely created by an A.I. to air on national television, showing the Burger King brand's commitment to this entirely new approach to creativity.