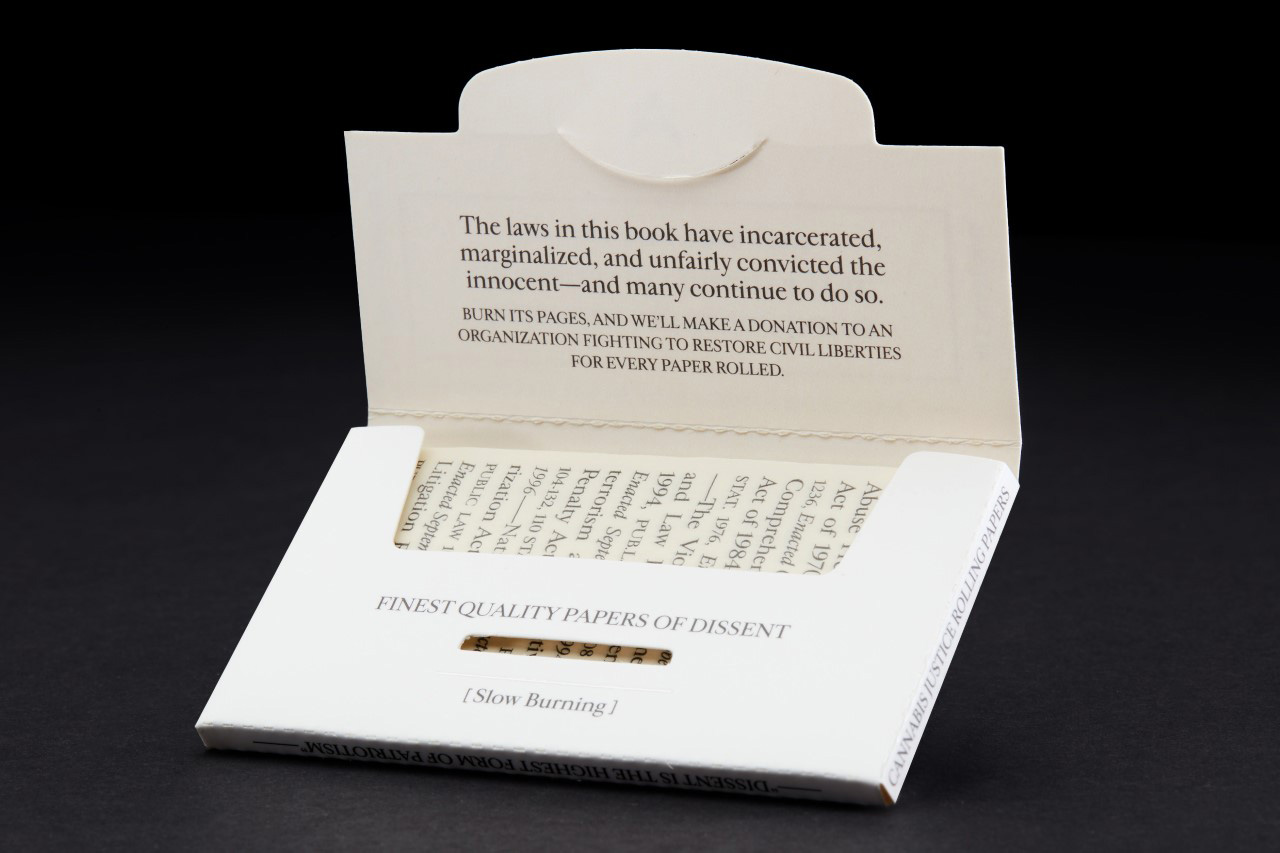 Burn this book, one page at a time. Its text, printed on rolling papers, contains laws that keep Americans jailed for marijuana possession. Many decry such statutes as outdated or unjust, and each "Burn Book" sale supports the Last Prisoner Project and other civil liberties initiatives.

Industry creatives joined pro-bono with Field Trip rolling papers to print 5,000 copies of the 12-page volume. Now, they say, "consumers can burn the very laws that have burned Americans for decades."

"If you look at the incarceration crisis in the United States and the history of the war on drugs, you can really point to a few pieces of legislation that are responsible" for keeping thousands of people—disproportionally those of color—behind bars, says freelance creative director/art director Alec Kleinfeld, who developed the project with CD/writer Dan Greener, formerly of Goodby Silverstein & Partners.

"The idea began as a conversation between Dan and I concerning what regular folks could do about it, both symbolically and practically," Kleinfeld recalls. "We joked about lighting all this bullshit on fire—but when it comes to cannabis, that actually makes a lot of sense. By smoking the bills, you can help the people actually incarcerated by them." 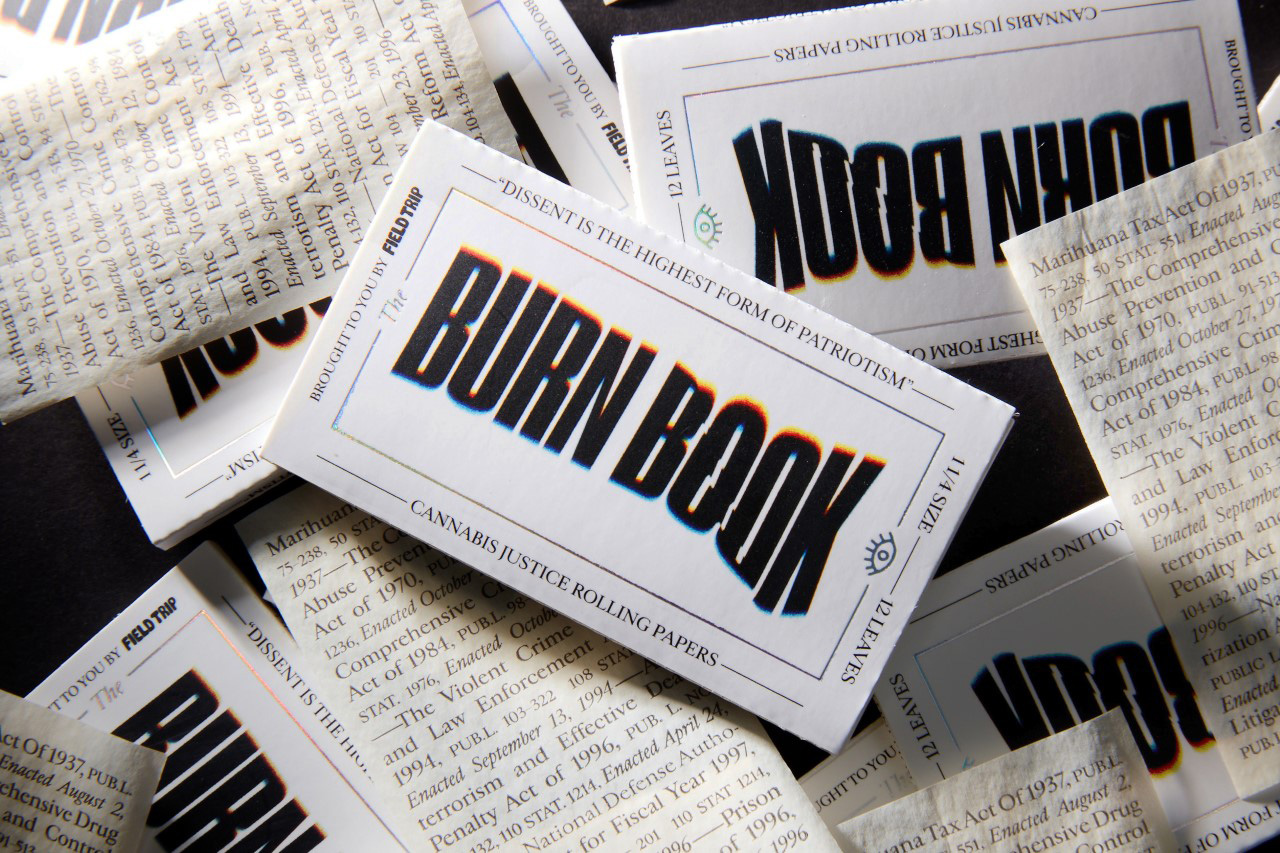 Greener says: "I think we can all agree that cannabis is doing a lot of good out in the world, and it's doing even better for those profiting from its decriminalization—but who's profiting? It's a very select few, while thousands of people sit in prisons for the possession of a crop making others wildly rich. It's like this separate-but-unequal policy environment, and we wanted to rectify that."

Recent efforts in a similar vein include these striking ads from Jay-Z's Monogram about cannabis-law hypocrisy, and films on the subject from PAX Labs and Vanity Fair. Also, Problem and Wiz Khalifa collaborated on a track backing minority-owned marajuana brands.

"Essentially, we just put together a presentation of what this could look like and pitched it to rolling paper manufacturers," Greener says. "Field Trip bit, and the rest is history. This was a passion project so there were no layers of approval. We just brought the idea straight to a client and got it made."

You can buy the $14 book at eight retailers and dispensaries nationwide, or at Field Trip's site, with roughly $7 per copy supporting the cause.

Hat tip to Joel Holtby of Rethink, who reminded us of a somewhat similar Canadian campaign from cannabis business incubator Leaf Forward. That work from 2018 printed the text of Bill C-45, which legalized recreational weed, on limited-edition rolling papers. 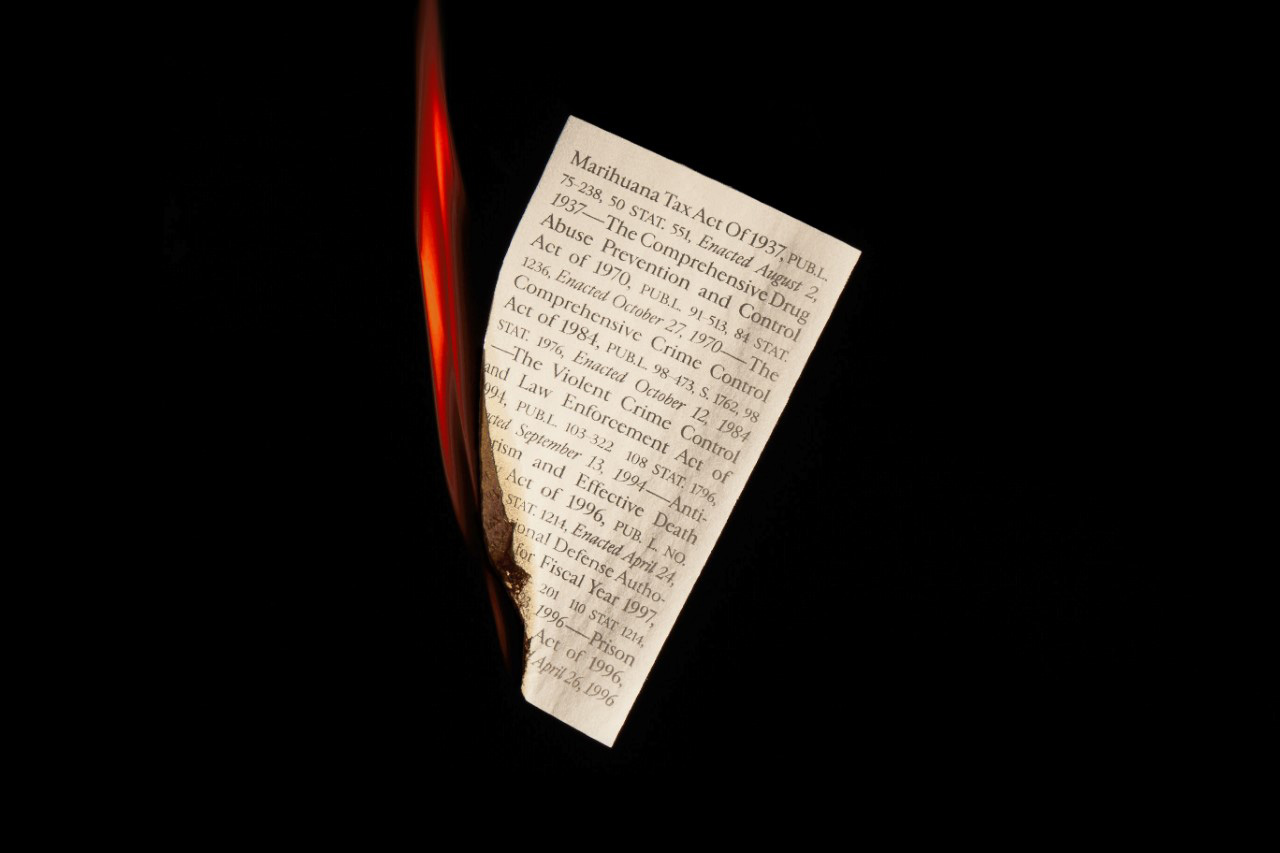 Below are the laws that Burn Book's creators hope to send up in smoke, with details provided by the team:

Deemed unconstitutional in 1969, and inspired by the racist hysteria against Mexican Immigrants and Black Americans, the bill effectively banned the sale and use of cannabis through heavy taxation.

Arguably the most famous bill on the list, this statute classified Marijuana as a Schedule 1 drug, putting it in the same company as Heroin, bath salts and ecstasy. Not only did this legislation kickstart America's failed war on drugs, it stipulated that cannabis possessed no accepted medical use in treatment, putting the federal government at odds with states that would later deem it safe and effective for clinical treatment.

Increased federal penalties for the cultivation, possession and transfer of marijuana. It established the U.S. Sentencing Commission, abolished federal parole and established a 3 strike rule that would come to devastate communities of color.

Essentially made the possession of cannabis a deportable offense, robbing immigration judges of discretion when adjudicating cases that might grant undocumented people relief from deportation.

Passed as the nation's prison population continued to explode, this made it even harder for the incarcerated to file lawsuits in federal court. Incarcerated people seeking the protection of the courts against unhealthy or dangerous conditions of confinement could no longer seek legal action against prison staff and others subjecting them to dehumanizing treatment.

In appropriating funds to arm counter-drug personnel, the bill brokered the sale of military equipment to the police. Additionally, the bill provided counter-drug support to Mexico, funding a cycle of violence around its border with the U.S.