"Their shells rocked the coast like a tree in a hurricane. The whole area was covered in a pall of yellow-black smoke. The sky was aglow with fire and death."

Gibson's descriptions inspired an almost impressionistic rendering of sand and surf lit by explosions from mortars and grenades. Wrecked landing craft poke through the flames like sad sentinels. Human forms trudging through the foam and crawling on land are few and far between—dimly-glimpsed chessboard figures prepared to make the ultimate sacrifice: 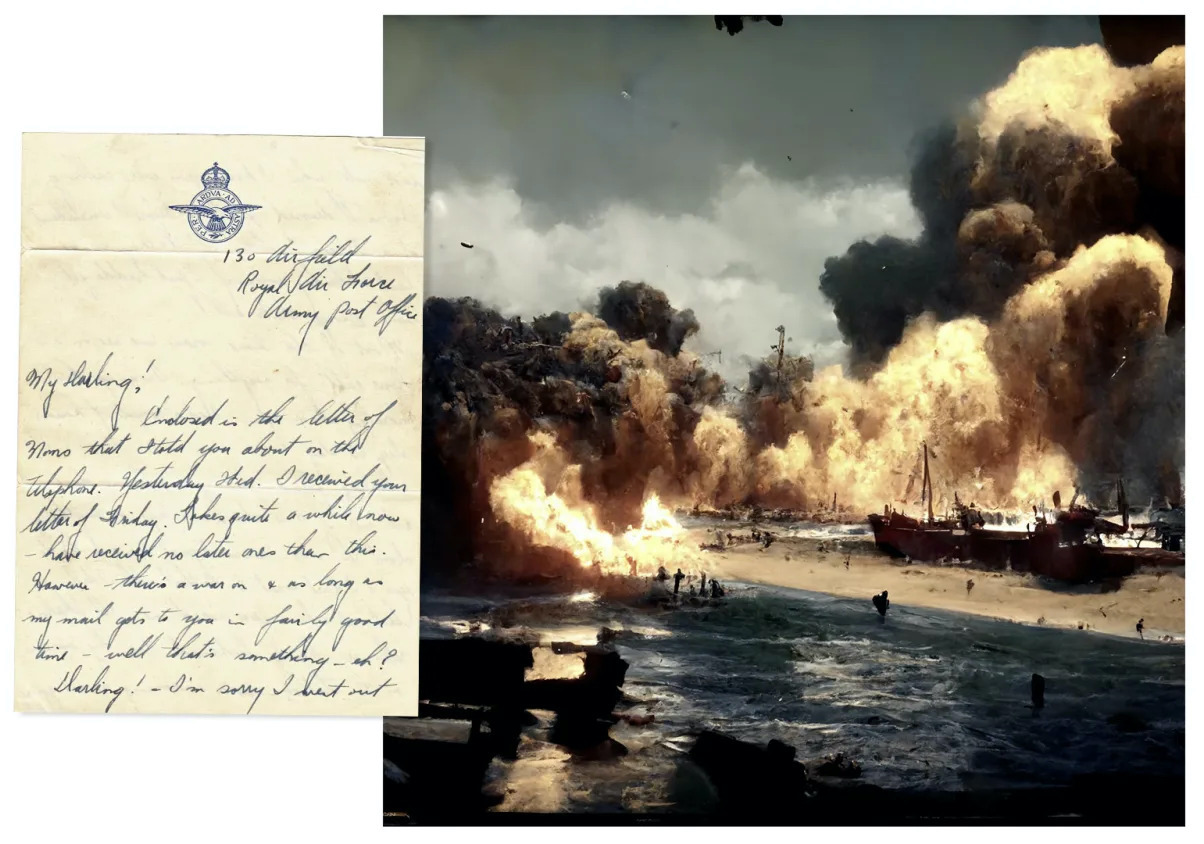 "Using artificial intelligence allowed us to turn the author of the letter into the artist, removing any human interpretation other than their own," says Ari Elkouby, CCO at Wunderman Thompson, which developed the campaign for Remembrance Week in Canada. "It's the closest we could get to showing works of art that were created by the soldiers' themselves, which we believe captures a more personal and authentic version of each memory."

The debate rages about the increasingly significant role A.I. plays for agencies and brands. Recent projects from Nestlé, Heinz and Campfire CD Steve Coulson—plus Wunderman's "Smallpox Simulator" for Meridian—have pushed boundaries, as pundits mull if such tech augurs the death or renaissance of marketing creativity. In "Remastered Memories," we see a true collaboration, with the human-machine interface crafting dynamic, deeply felt takes on history.

For example, a heightened sense of mood and emotion permeates an illustration based on a letter by World War I Army infantryman James Hepburn. He lost an arm, and was writing from a French hospital with his other hand for the first time. Note how a crimson-haze wafts over the casualty ward, reminding us that for some fighters, the cloud of war never dissipates: 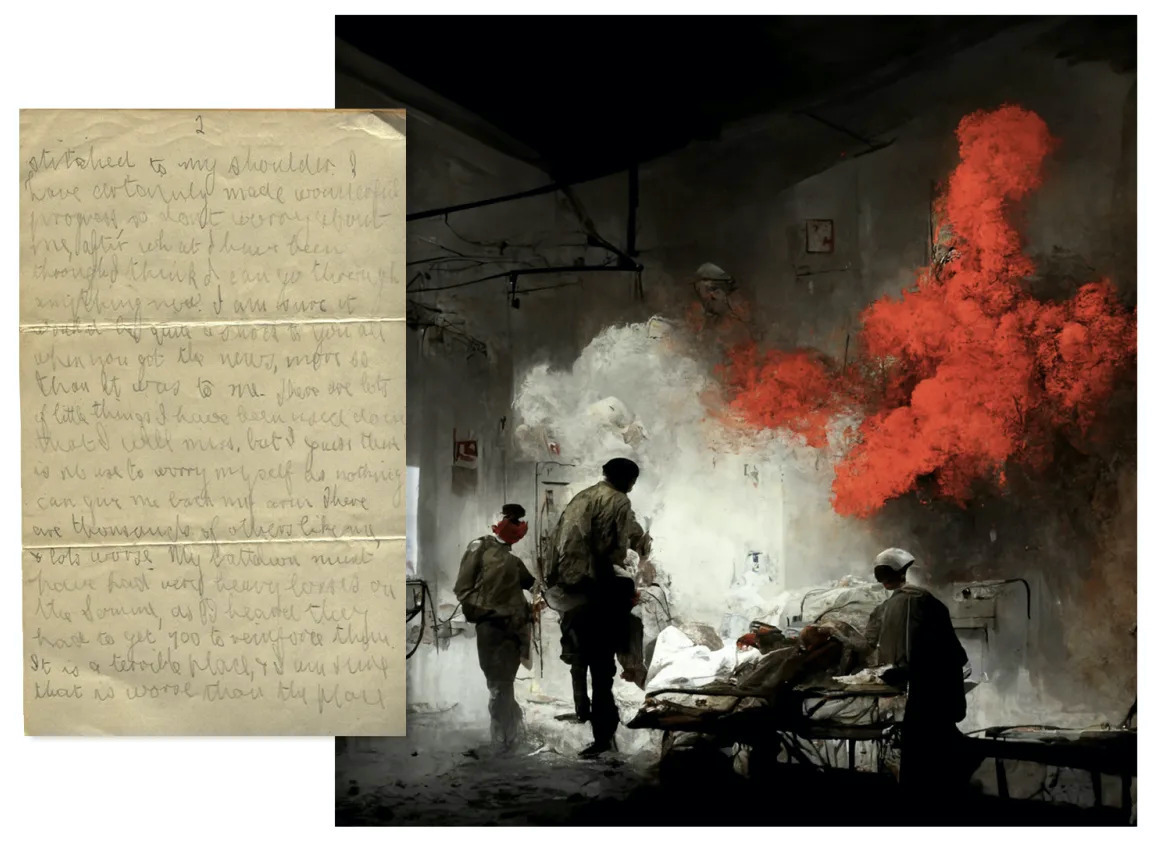 "A handful of key words and phrases were selected from each letter and entered into the algorithm," Elkouby says. "As the letters were often several pages long, we searched for words that provided a visual description of what was happening in the scenes, as well as words they used to describe the emotions they were feeling at the time. To help guide the algorithm markers such as 'WWI,' 'D-Day,' or the year the letters were written were added."

Next, George Stonefish, an indigenous solider, describes his sense of isolation during a European deployment in 1917:

"I still see the green leaf and a green grass…[I am] still looking at the same moon as the people at home looking at. Still, I am here…the friends which I came with are all gone."

The A.I. interpretation of such lines offers an intriguing contrast with the Gibson piece above, where the G.I.s appear dwarfed by the fiery conflict. Stonefish's letter generated a markedly different take on the wartime experience. A solitary figure, crowned by moonlight, dominates the frame. He stares into the distance, a cypher for every serviceman or woman grappling with violent reality and an uncertain future: 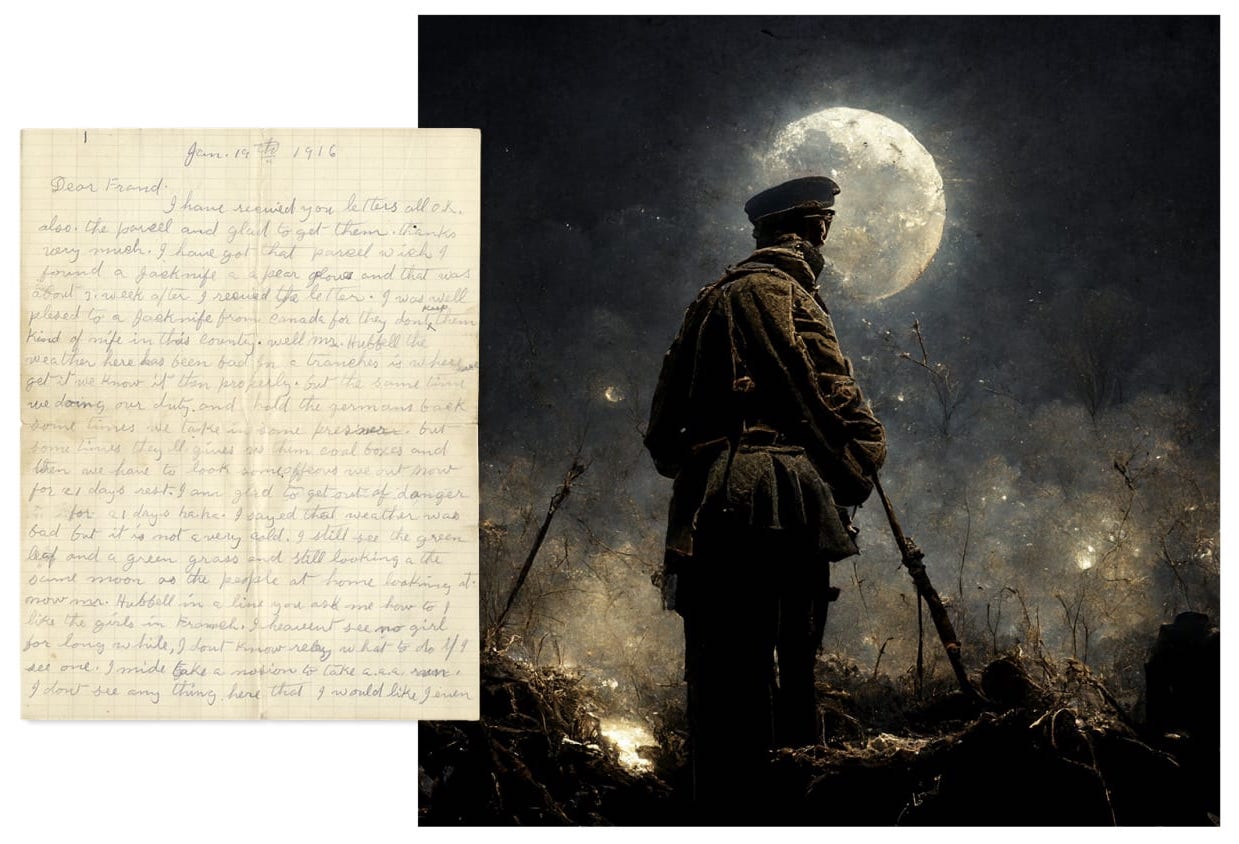 "For many Canadians, Remembrance Week is losing its importance. Younger generations do not understand the impact of war on those who serve and on our country as a whole," says True Patriot Love CEO Nick Booth. "There are over 461,000 Veterans in Canada. Many may be isolated or need our help. This unique campaign creates powerful visual representations of real experiences, allowing us all to see what the world looked like through the eyes of someone who served."

You can see the other four A.I. efforts below, from dispatches by solider William Mayse, nurse Norma Stowe, POW George Griffiths and trooper James Francis Watson: 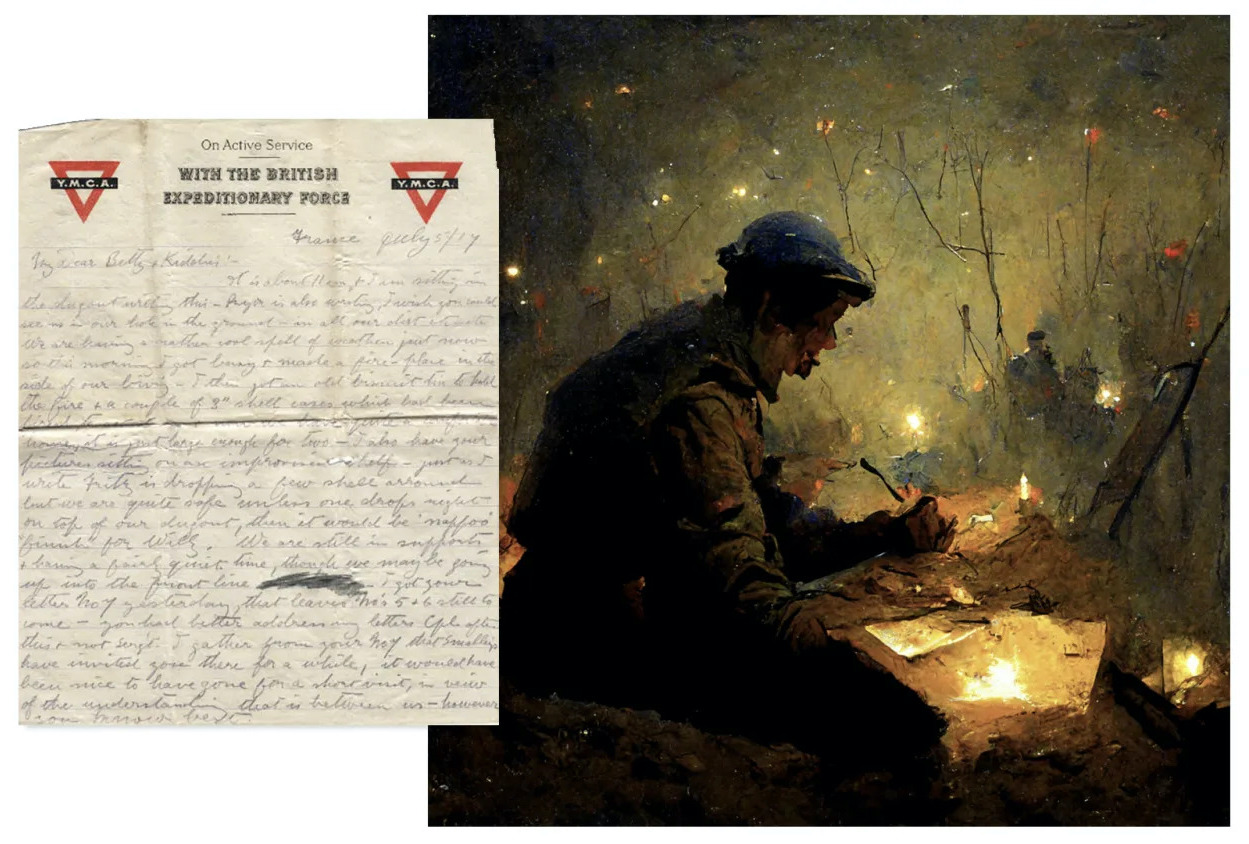 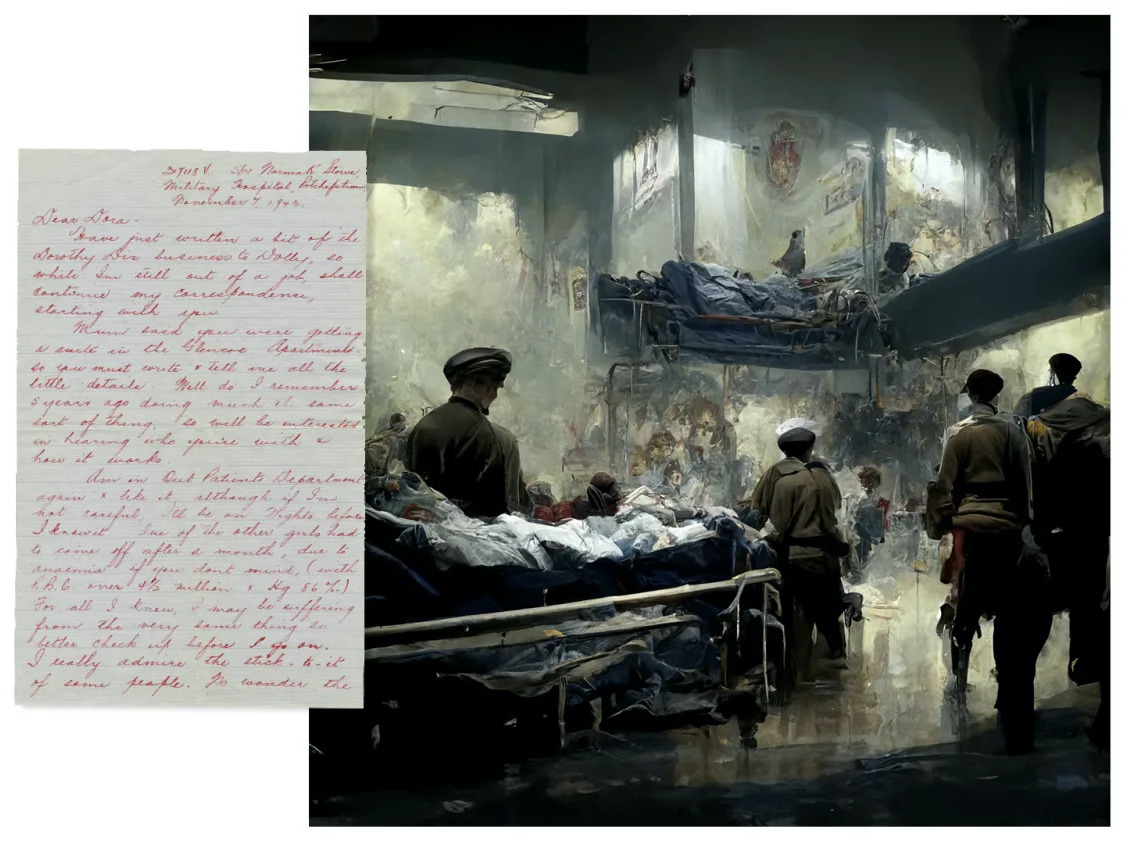 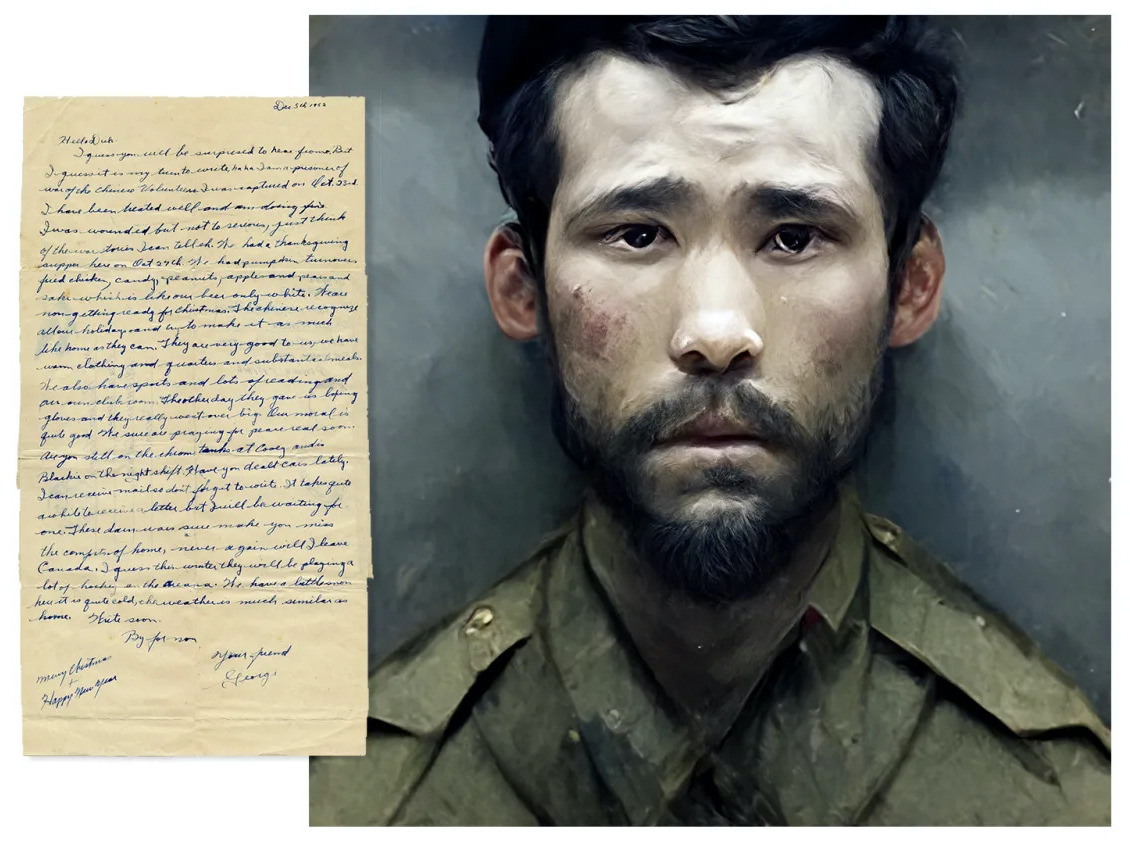 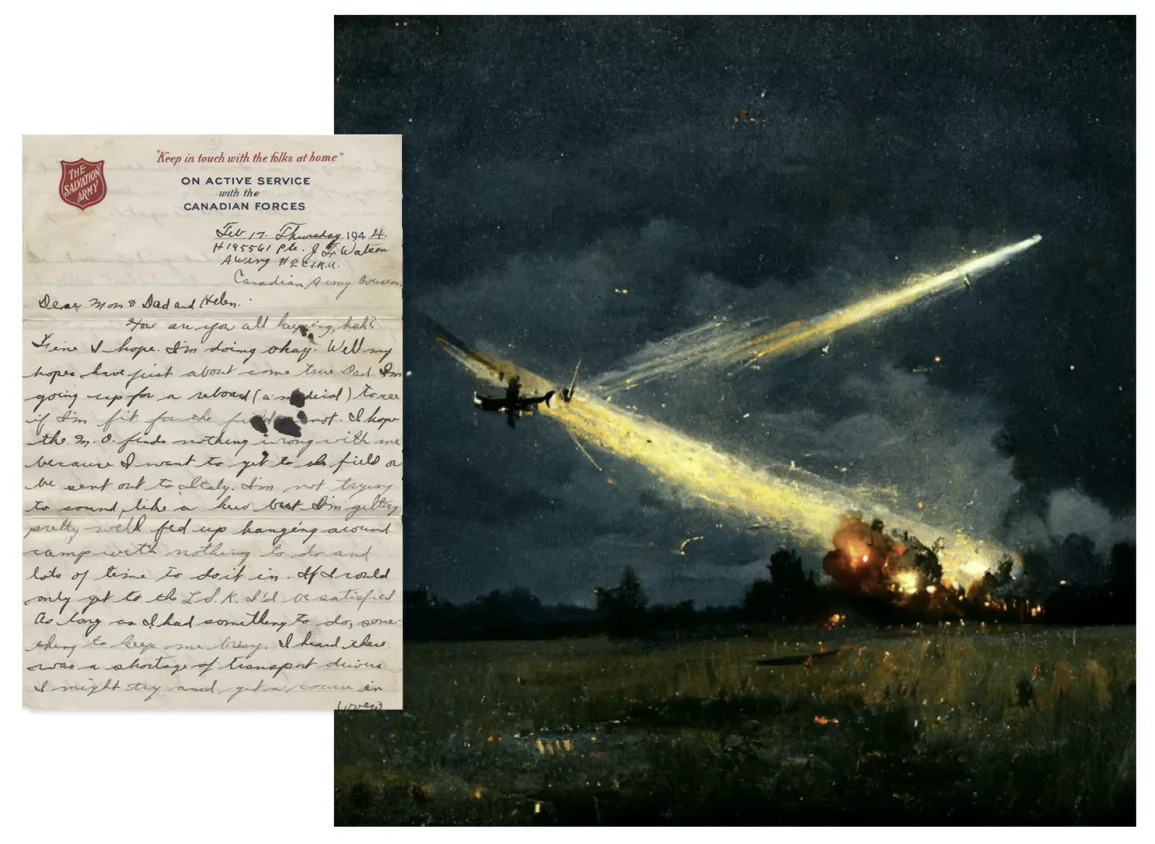 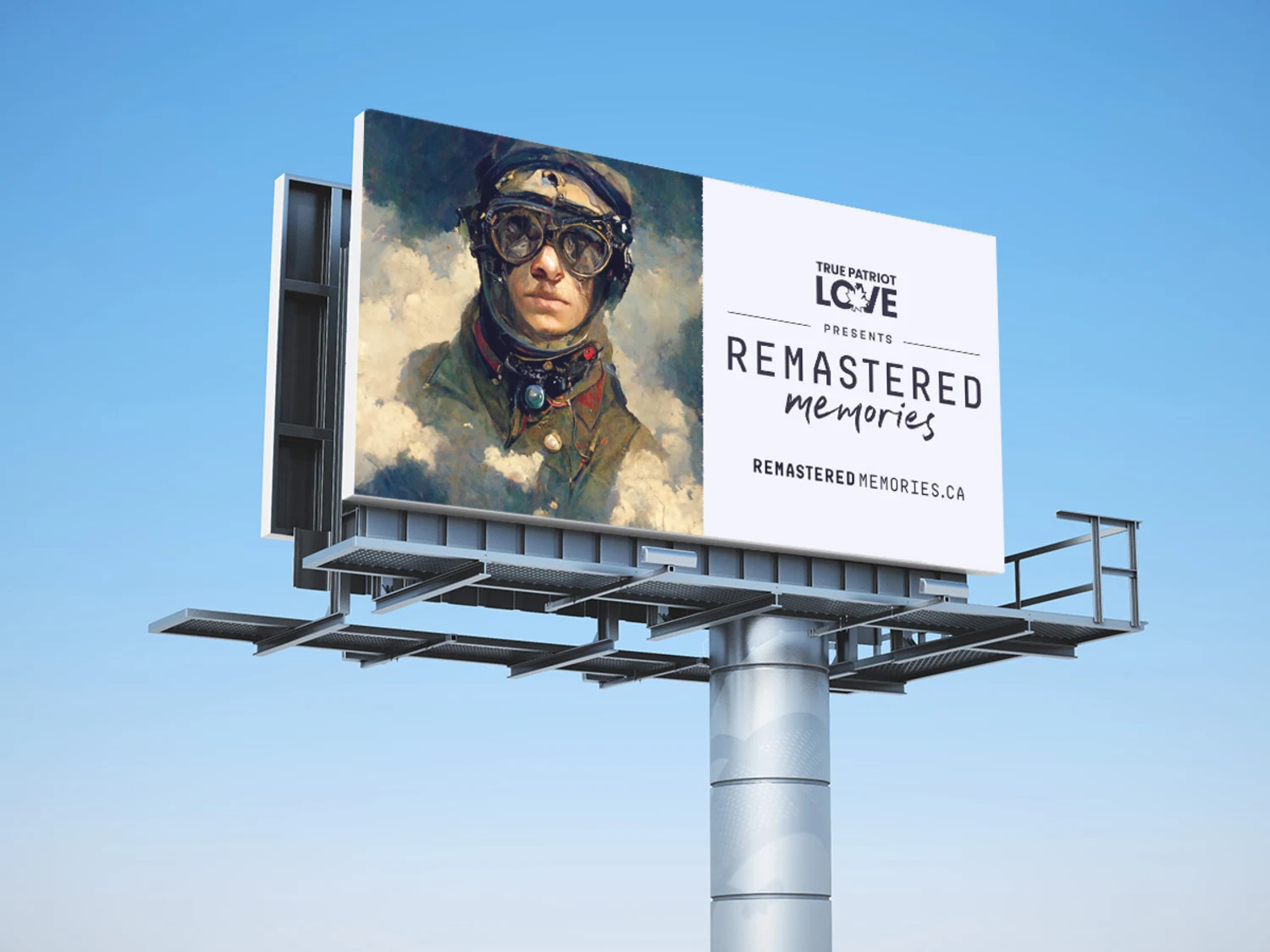