What choices will we make in the next 30 years?

A world with clean air, bright skies and verdant, vibrant life all around—or a polluted planet populated by human beings as sickly and shriveled as the toxic crops choking the countryside? The choice is ours to make over the next 30 years, according to "The Gigantic Change," an animated short about climate change featuring the voice of Whoopi Goldberg.

With her distinctively rich, raspy tones conveying a wealth of emotion, the Emmy, Grammy, Oscar and Tony winner portrays a citizen of the year 2050 who tells her granddaughter a special bedtime story.

"There once was a planet on the verge of destruction, that people were killing with greed and construction," Goldberg begins in the three-minute film launched today—World Environment Day—by Extinction Rebellion and Passion Pictures.

Amid scenes of gray desolation, a deer's face melts away—right down to the bone!—as Goldberg continues, "The planet was dying, and nobody cared. The Earth was dying, and very, very scared."

When she asks her granddaughter, voiced by 10-year-old Livia Nelson, to finish the tale, the narrative takes an encouraging turn.

"One day, the people realized that all those things were very bad," the girl says. "They wanted to change things and not kill everything anymore. It wasn't easy, but then more and more people agreed. And together, they planted trees and pretty plants all over the world."

We watch endangered tigers and orangutans stage comebacks, "happy again in the new jungles and forests," she says. "Everybody stopped doing all those horrible things that they did before and started looking after the planet until it was all healthy again."

Ultimately, sunshine swells and everyone lives happily ever after.

In a moody, ambiguous finale, the girl asks, "Did people try those things?" and her grandma replies, "Let's hope so."

A message fills the screen: "On our current path, by 2050, up to 1 billion people will be displaced, and almost half of all species on Earth will be extinct. This doesn't have to be our future. You can make a difference by taking action today."

"When it comes to the climate, we're living in a world of gloomy future projections, so I wanted to create something that gives people hope," George Lewin, who co-directed "The Gigantic Change" with animator Nicola Jane Francis, tells Muse.

The team sought "to show that a beautiful, sustainable future really is possible," Lewin says. "But this won't happen on its own. People need to understand that things need to change on a big scale."

To deliver that message, Francis used 2-D frame-by-frame techniques in Photoshop, striving for a textured, handmade feel. "The colors play a huge part," Lewin says. "The interior scenes with our grandmother and granddaughter are very neutral. However, the story-world evolves and blooms with blues and corals as the granddaughter breathes life into it through her imagination. This use of contrast aims to really hit home with the audience about what could be our future."

As for Goldberg's involvement, "we thought her iconic voice would bring a perfect sense of gravitas to the performance," says Serena Schellenberg, who produced the film. "Plus, she is outspoken on environmental issues and had the potential to inspire many of her followers to take action. So we sent the script to her agent, and she came back quickly saying 'I'm in.' We couldn't believe it!"

With the production centered in London, Goldberg recorded her contributions from New York via Source Connect. "She pretty much nailed it on the first read," Schellenberg recalls. "We did a few more takes anyway, but the organic expression in the first one was hard to beat."

She adds: "There's already an ocean of content out there which preaches to the converted, so we wanted to make it a priority to reach those who may not know the situation we're in."

But … what's up with that ending?

"Showing people a beautiful, utopian future, and then jolting them back to a bleak reality, aims to inspire questions of whether action was in fact taken," Lewin says. "Was it all in the granddaughter's imagination? Perhaps people didn't take action, which led to a dystopian world. But today, in 2020, we have the chance to rewrite that story."

"The Gigantic Change" will live on Extinction Rebellion's digital channels, and across Goldberg's social feeds, where she has more than 4 million followers.

The appearance of orangutans harkens back to Passion's lauded 2018 Greenpeace short "There's a Rang-Tan in My Bedroom." Developed with ad shop Mother, that PSA featured the voice of Emma Thompson and dealt with the great apes' plight in the face of deforestation.

Last week, working with creatives in the U.K. and Australia, Extinction Rebellion dropped "How Normal Was Normal," a minute-long caution for people leaving quarantine. 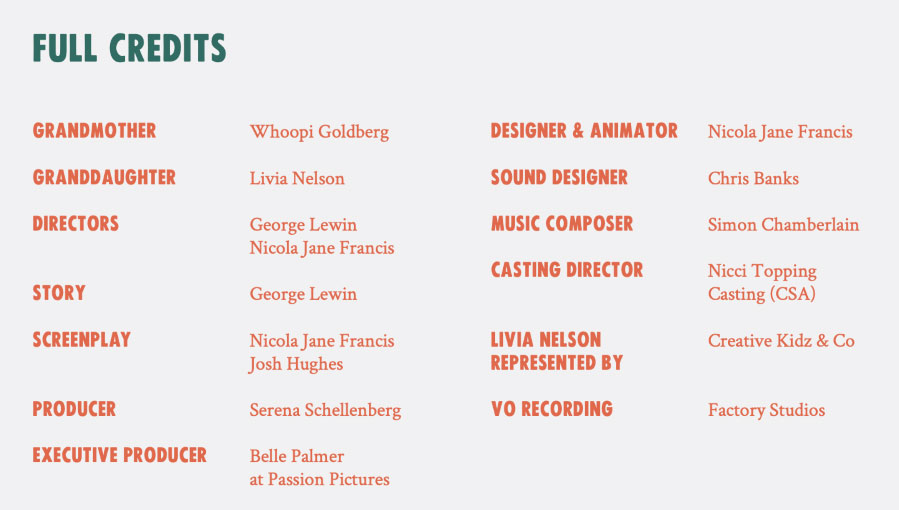