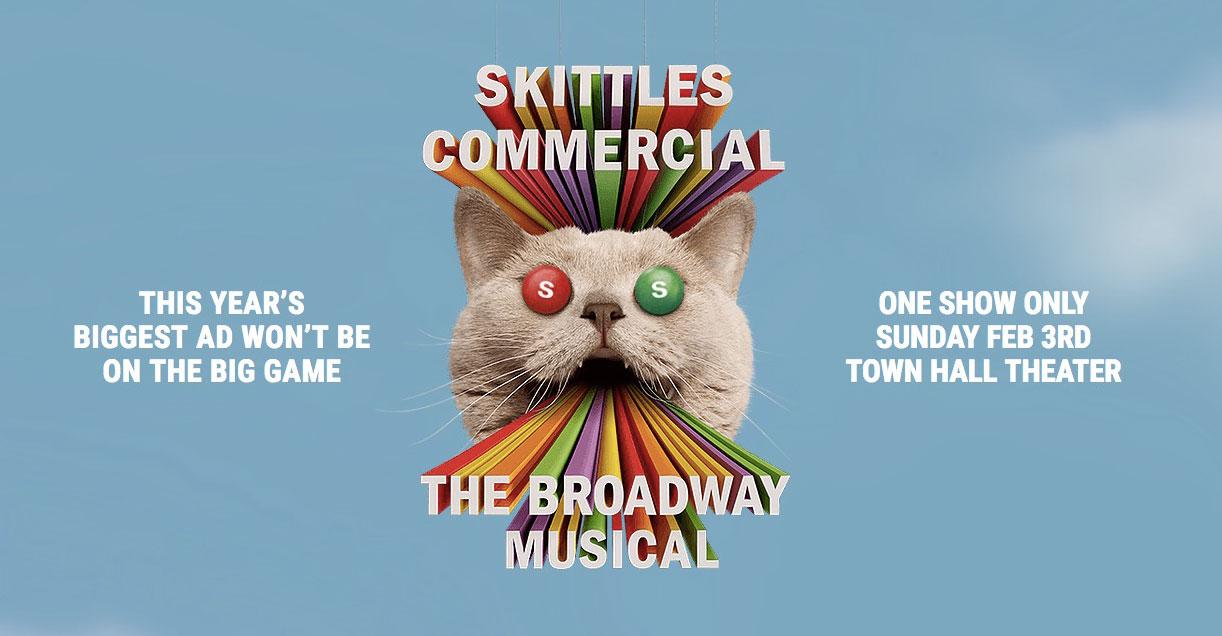 One show only, at New York's Town Hall

Skittles had a great time punking the Super Bowl last year by creating a commercial that only one teenage superfan got to watch.

For the 2019 game, the Mars candy brand is staying away from the game once again, but this time with a much bigger stunt: It will present Skittles: The Musical, on Broadway, for one performance only on the afternoon of Super Bowl Sunday.

There are no details yet on what, exactly, the musical will be about. But it will last 30 minutes and include Skittles as part of the plot (presumably a large part of the plot). Doors will open at 12:30 p.m. for a 1 p.m. show at New York's Town Hall, so you'll be home in plenty of time for the 6:30 p.m. game.

The musical is being written by playwright and Pulitzer Prize finalist Will Eno in partnership with Skittles agency DDB Worldwide. The 17-member cast will feature a yet-to-be-named celebrity and will feature original songs played by a live band.

Eno is best known for his 2004 one-man show Thom Pain (based on nothing), which, according to Wikipedia, "tells the story of a bee sting, a boy with a dog that died, and his experience with a woman" (which sounds like a Skittles ad, come to think of it).

As of this writing, there are still tickets left at the 1,500-seat theater. They are going for between $32 and $207 each, with all proceeds benefitting Broadway Cares/Equity Fights AIDS. Skittles will match the donation raised from ticket sales.

It's rare, though not unheard of, for brands to create content for live theater. A year ago, Carl's Jr. celebrated the coming opening of its first restaurant in Manhattan by staging an off-Broadway play starring its mascot, Happy Star.