BK Gets Burned for Tweeting That 'Women Belong in the Kitchen' 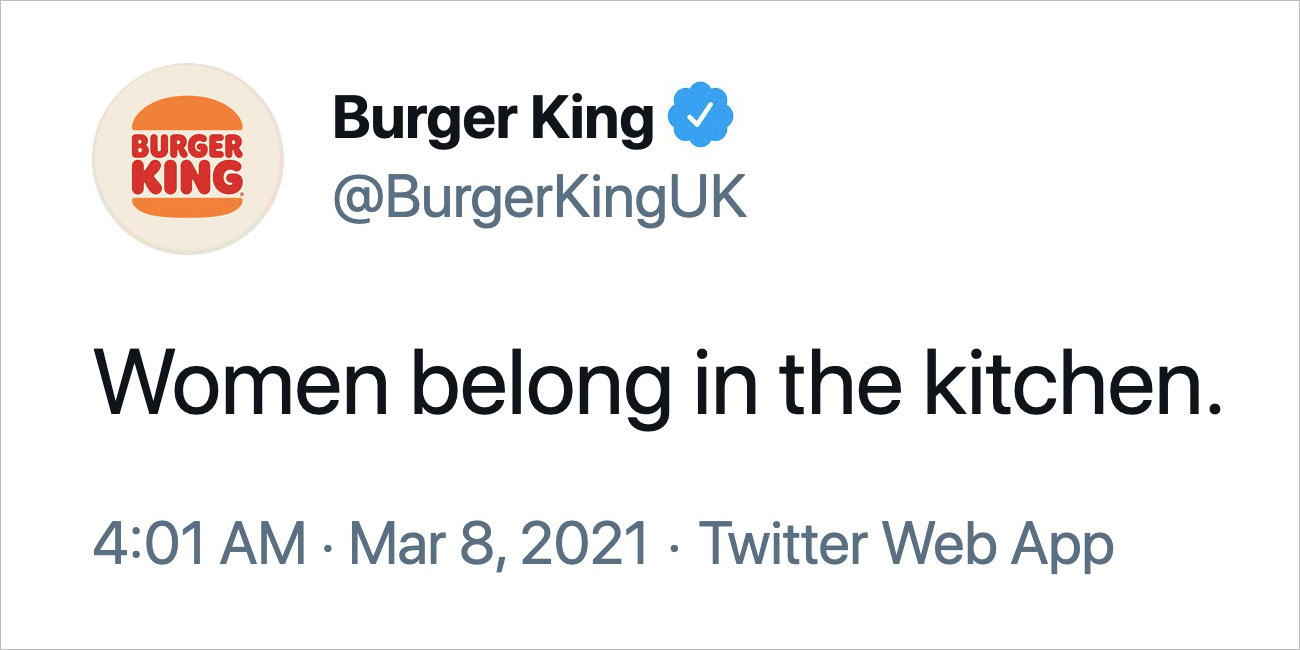 Update: After hours of sturm und drang—and tons of publicity—Burger King has issued an apology and deleted its controversial tweet that read, "Women belong in the kitchen." The post was part of a campaign that launched a scholarship program for the restaurant giant's female crew members.

We hear you. We got our initial tweet wrong and we’re sorry. Our aim was to draw attention to the fact that only 20% of professional chefs in UK kitchens are women and to help change that by awarding culinary scholarships. We will do better next time.

You can read our original story below:

When you run an ad on International Women's Day headlined "Women Belong in the Kitchen," what could go wrong?

Burger King unleashed such a placement in today's New York Times. Developed with David Miami, the open letter leads with that old chauvinist line. But it's drenched in good-natured irony, as the copy introduces a program designed to help BK's female team members earn degrees in the culinary arts: 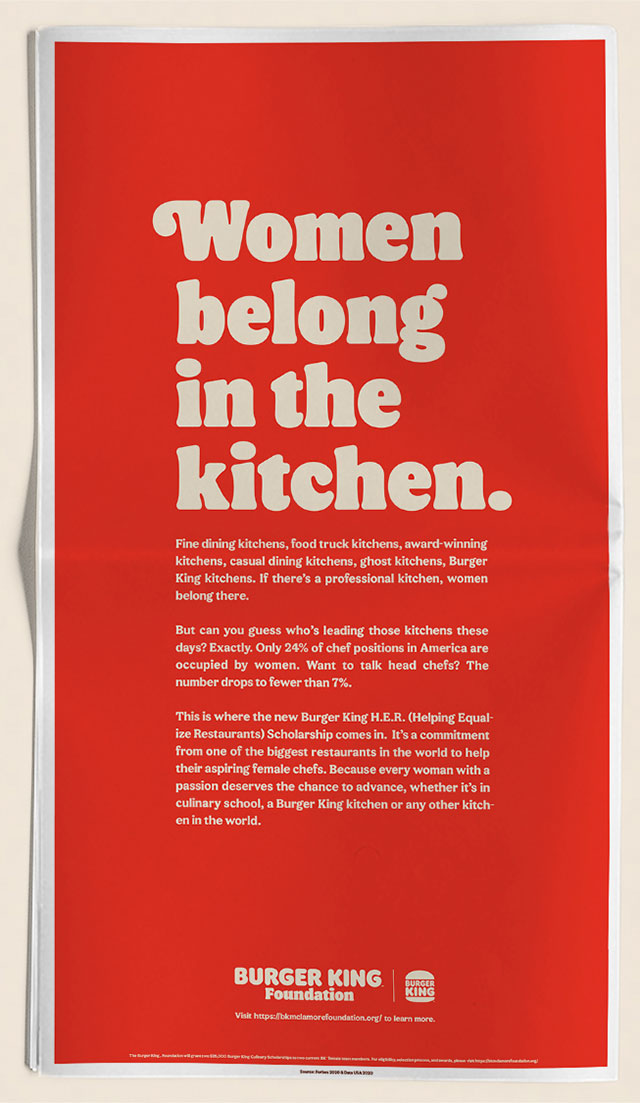 Unfortunately, an accompanying tweet from @BurgerKingUK offered no immediate context. It contained the "Women Belong" line and BK's logo. That's all.

Naturally, the Twitter-verse voiced its distaste, even though the fast-feeder did subsequently spell things out fairly well. 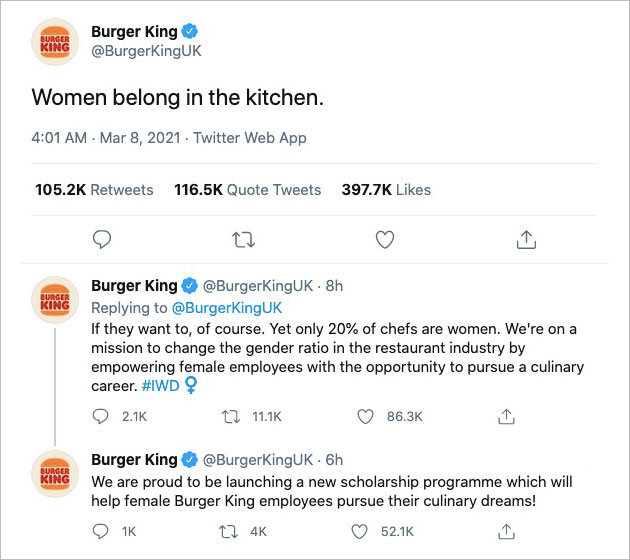 As of this writing, the original has generated about 400,000 likes. It's unclear, however, if that's a genuinely sexist response, or if users are indicating approval for the intended message of women's empowerment.

For its part, BK responded that it would be foolish to delete a statement "that's drawing attention to a huge lack of female representation in our industry, we thought you'd be on board with this as well?"

Several replies note that BK could readily have included a sentence of explanation in the initial tweet, and quite a few folks chided the chain for using sexism as clickbait.

"We are committed to helping women break through a male-dominated culinary culture in the world's fine dining restaurants—and sometimes that requires drawing attention to the problem we're trying to help fix," BK says in a statement. "Our headline today was intentionally designed to draw attention to the unacceptable fact that only 7 percent of head chefs in the U.S. are women. We understand that some are only reading the headline without our explanation, but we're sure that when people read the entirety of our commitment, they will share our belief in this important opportunity."

To apply for a H.E.R. (Helping Equalize Restaurants) Scholarship, female employees should submit an essay describing their culinary career ambitions when they fill out the fast-feeder's standard scholarship application between Oct. 15 and Dec. 15. H.E.R. scholarships will be awarded by a panel of BK team leaders and franchisees. Only U.S. staffers are eligible, but similar programs are planned in the U.K. and Mexico.

Before the backlash began, a BK rep told Muse, "We're actively tracking our workforce makeup and know we have more work to do. Our focus is on putting actionable plans in place to move the needle. For example, we are committed to having at least 50 percent of all final-round candidates for any role at the BK corporate offices be demonstrably diverse—including gender, race and sexual orientation."

Details about the scholarship weren't available, and BK did not provide information about its current management breakdown. (The 12-member board of director at its corporate parent, Restaurant Brands International, includes one woman.)

"There is an intimacy to print," the rep says of the NYT message. "As a reader, you get to spend as much time as you want with the copy. Knowing the headline would catch people off guard, the print medium gives readers ample time to fully absorb our announcement and understand our commitment."

Of course, BK is well-known for its splashy marketing, with lots of notable work including the cause-célèbre "Moldy Whopper," a Reduced Methane Emissions Whopper made from less flatulent cows, an ultra-oniony burger to encourage social distancing, and a cheery Christmas-in-July promo to chase the pandemic blues.