I'm a lucky man. Both my offices are close to water. Since selling my agency, Lowe Roche, in 2012, I've worked out of the poolhouse in our backyard. It was built in the early '60s. When our house was built in the early '90s, they kept the pool and the poolhouse that was originally here. It was in rough shape even then, but we did a few cosmetic fixes and used it for countless parties, including the 15th anniversary of the agency. Everyone who had ever worked for us was invited. At 10 p.m., disco dancers (who secretly climbed up on to the roof on a ladder from our neighbors yard) emerged out of the smoke following a giant seven-minute surprise fireworks show (also on the roof), all set to "September" by Earth, Wind & Fire. It was epic.

Five years ago we gutted the poolhouse and had our favorite architect, John Tong, redo it. It's about 900 square feet and has two fireplaces from the original building, one inside and one outside. I must have drawn it 40 times over the years as to what it could be. It has a Murphy bed in the cabinetry for guests, with a shower and toilet behind privacy glass. I put in powered speakers (also hidden) that slide out for parties. I love that it works as both a work and party/entertaining space. The doors slide open so in the warmer weather it's like sitting outside. It's a great space to both work in and have clients to for meetings and offsites. Many have taken place here over the years. People really relax, as it doesn't feel like the city. There's a good-size pond we put in with a fountain that drowns out any traffic noise. 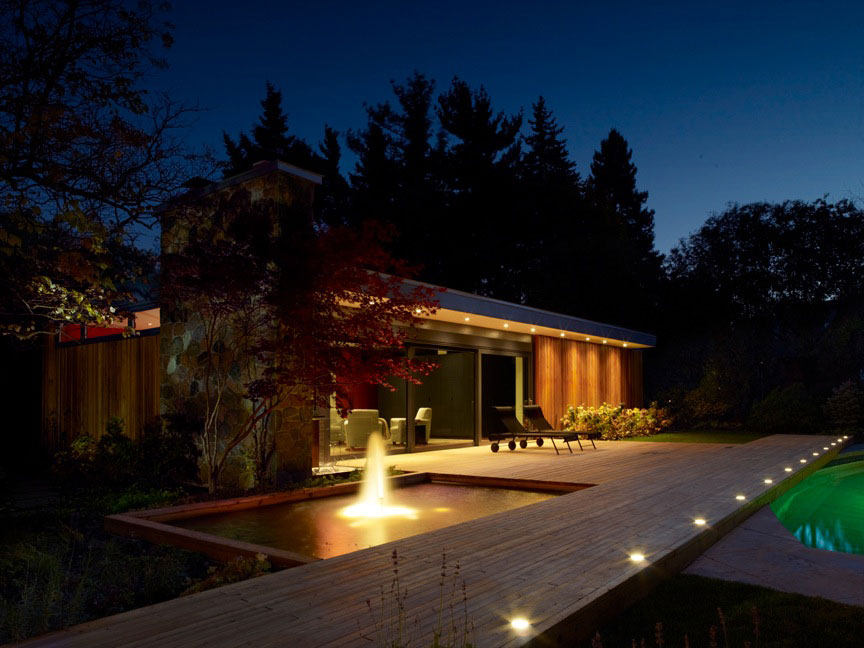 This is the poolhouse, looking out from our house. The yards where we live are quite large, even though we're within the city limits. Most mornings I check Waze so I don't run into a lot of traffic. 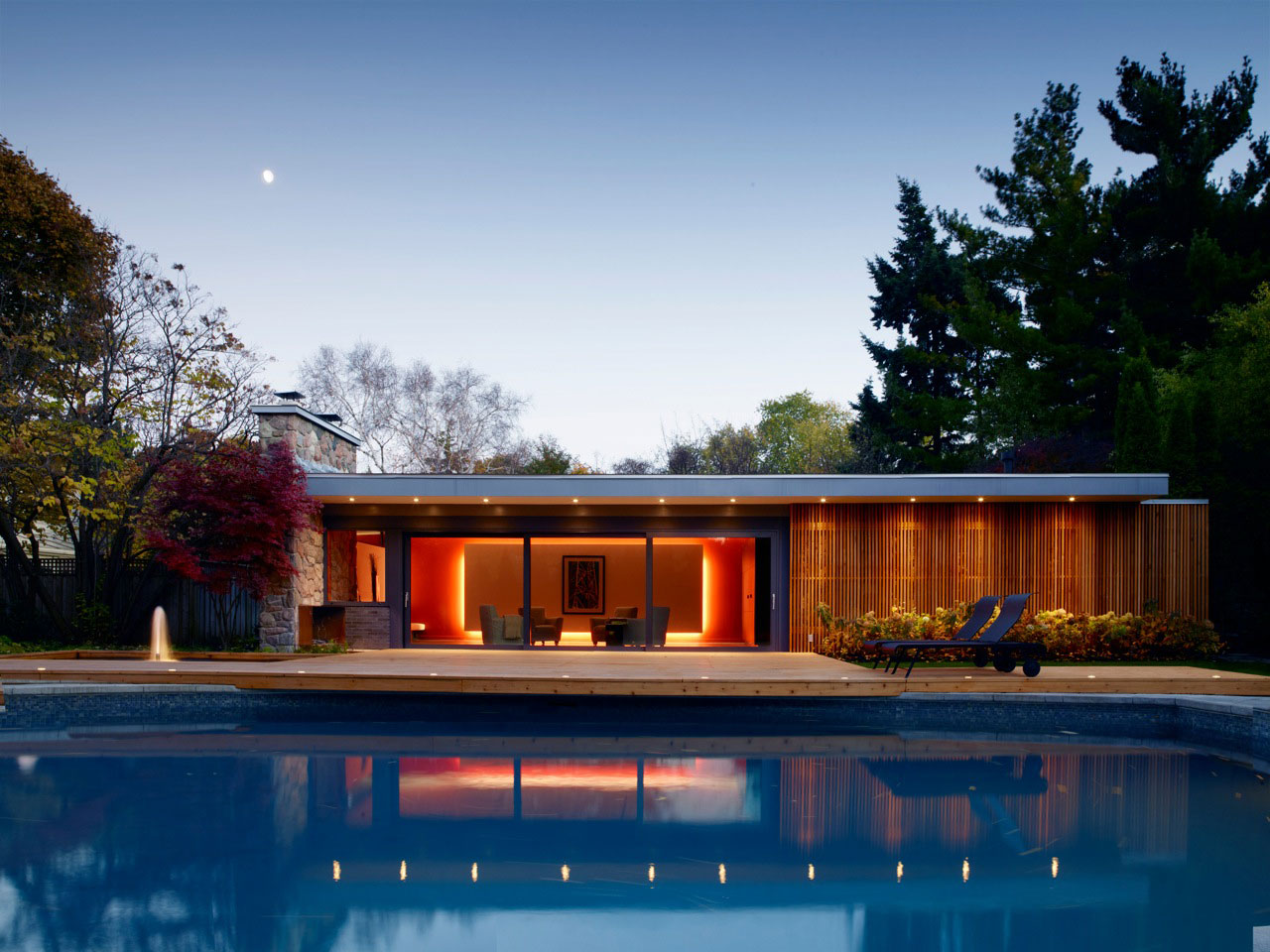 The biggest change in redoing the poolhouse was the sliding doors, as it meant adding a huge steel beam across the width to support the new roof. I also wanted the pool and previous concrete deck to feel integrated, so we added the cedar decking over it and ran it out over the pool, so it's almost like a dock. We also added the large pond and the fountain to help drown out traffic noise. No fish in it, though, as the raccoons are crazy for sushi.

A big part of our newest company called Disruptincy is our brainstorming sessions with C-suite partners. Too often the best people to work on a client problems aren't in the room. Because many of the solutions aren't an ad. We bring in a whole host of brainiacs from various professions, be that automotive, finance, design, retail, CPG and even traditional advertising to attack the issues head on. We use those giant Post-it notes to brainstorm ideas that we then stick up on the wall. Because we promise nine ideas in nine days, we have to be as efficient as possible. And since our fees are transparent, we really have to live that promise. Which works, since in my experience, urgency begets creativity.

I do a lot of my work on my iPad pro using the Paper app by FiftyThree. It's a fantastic app. I learned about in 2012 from our son Alexandre, and it got me drawing again, which I try to do daily. (There's lots on my www.instagram.com/geoffreydraws/). I even use the app on my phone. In fact, I never cease to be amazed at how many creatives don't use it and other things available to us to be more creative. 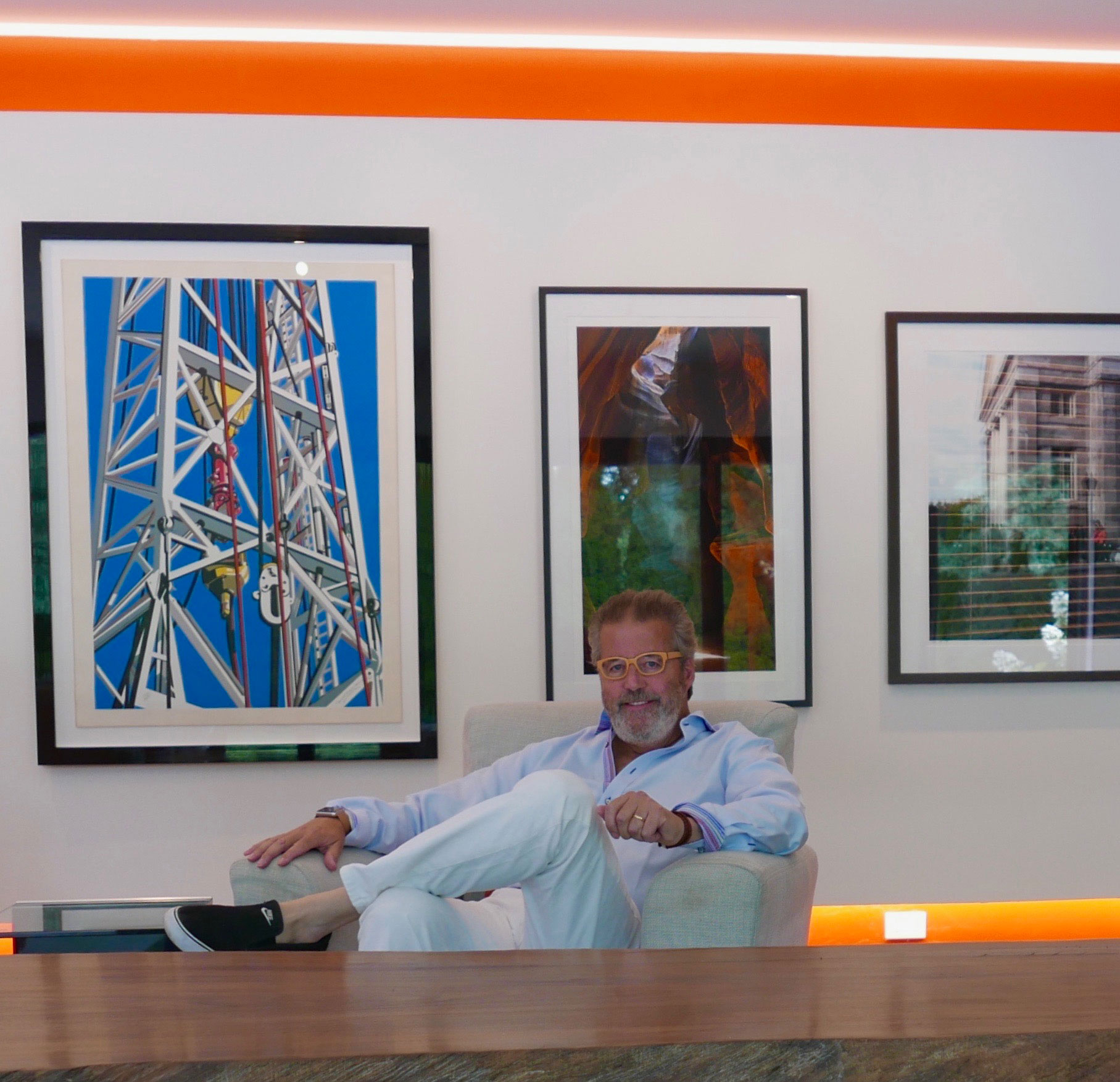 Here I am in front of the "gallery"-like wall we had put in. The wall was about 25 feet long, so I felt it needed something to break up the expanse. The art is a mix of photography, vintage silkscreens and pieces by Kazimir Malevich, the Russian constructivist, and also an amazing piece by the photographer O. Winston Link which I love. (Sorry, not shown.) 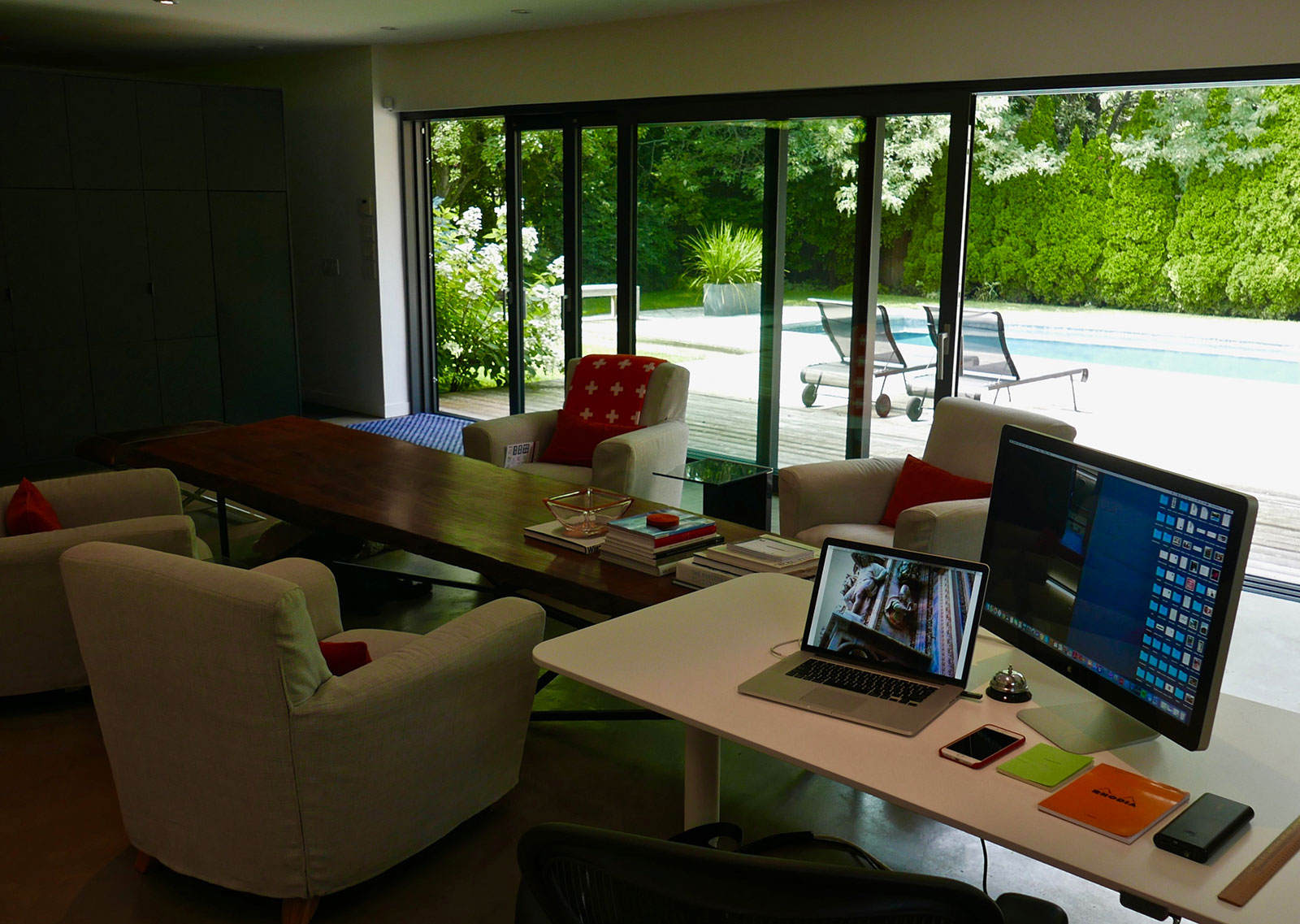 Most days my partner Jack comes from downtown and we spend the day trading ideas back and forth. I sit at the Ikea desk. It raises and lowers, which is great if I get bored. I use a MacBook Pro, though mostly use my iPad for notes and drawing. Jack sits in one of the big chairs, as he's not a desk guy. I change my desk location weekly, depending on what meetings we have and also because I like variety. The view never gets old.

Technology is a real gift, and I love learning about new stuff. I shoot a ton of photos and videos on both my phone and on a mini SLR. I edit a lot of my videos on my phone with a fantastic app called VideoShop. The amount you can do on it is mind-blowing. Music, supers, dissolves, speed, framing and loads more. Best part is they keep adding features. I also recently got a DJI Osmo Mobile gimbal. You attach your iPhone to it and the results are amazing for shooting all sorts of things. I use a height-adjustable desk and mostly work from that.

There's a 15-foot-long table made out of reclaimed wood from the Panama Canal that our architect found, which makes the space that much more unique. I also had the architect put in a picture wall that sits out about 4 inches and has LED lighting hidden behind the reveal. The pieces on it are photographs, silk screens and a "constructivist" piece I love. I change them fairly often to keep things interesting. Surrounding it is the rest of the wall, painted in my favorite shade of orange. Most of the year it's a great place to work out of. The view of the pool and the changing seasons never gets old. And the commute is never very rough—about 11 seconds in heavy traffic. (Sorry, second time using that joke in this article.) My partner Jack Harding comes from downtown by subway, which is really convenient. 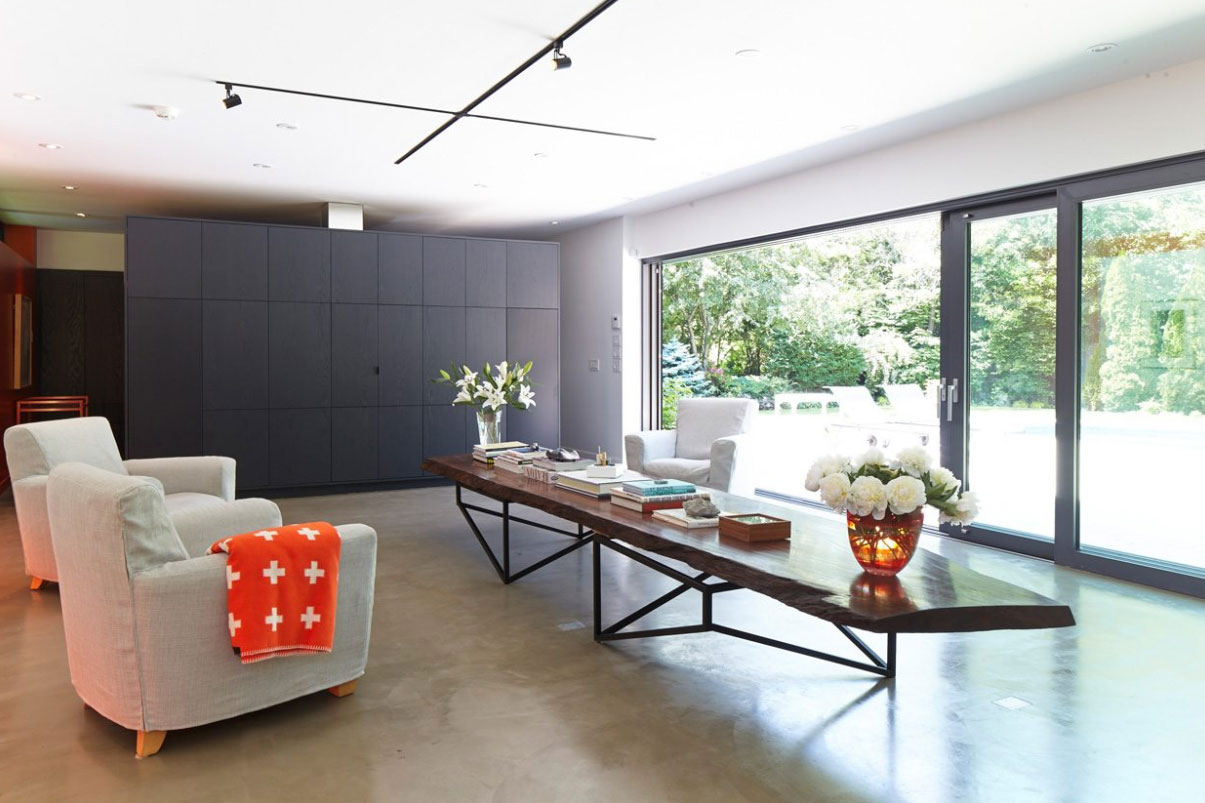 Another view of the poolhouse looking out to the garden. The table weighs about 300 pounds, so it's a trick to move. The legs can be turned up so it can be "counter height" for dinner parties—another amazing innovation on the part of our architect John Tong. The cabinets are for storage and also house a TV and my stereo. They also act as a "wall" between the sleeping area (with a Murphy bed) and bathroom/kitchenette. On the far left and right are speakers hidden behind black metal mesh that slide out for parties. I like parties. We tried to make the entire unit as simple as possible so that it sort of floats between the two rooms.

In the summer it gets a little hot, and that's when I go to my other office. It's in our cottage at our island on a lake about two hours north of Toronto. It's a great place to work, given the view. My desk in this case is an antique pine table that was in my parents' dining room table growing up. I come from a family of five kids, so it was a bit tight. And it doesn't have the raising and lowering feature. But it works.

I feel incredibly lucky having the cottage, which I bought 20 years ago when our four kids were still quite young. It's our/their happy place. During the winter it's pretty tough to get to, given the lake freezes up and stays that way until mid-April. So going back up doesn't really happen until mid-May, when it starts to warm up. 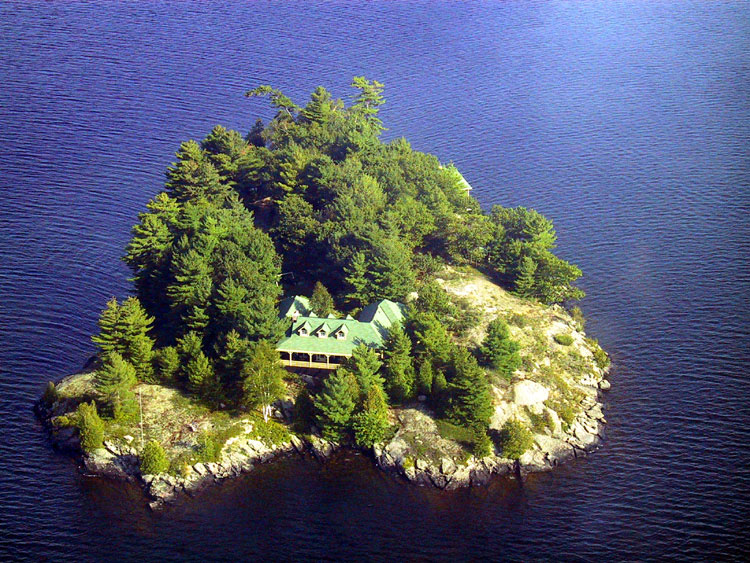 Here's our island from the air. Just over two acres. It's a real jewel. We're in the most open part of the entire lake, so we really get hammered by any storms that come through. Scary, but truly stunning as you watch them approach and fly through in no time. Yes, it's shaped like a heart, which makes sense. 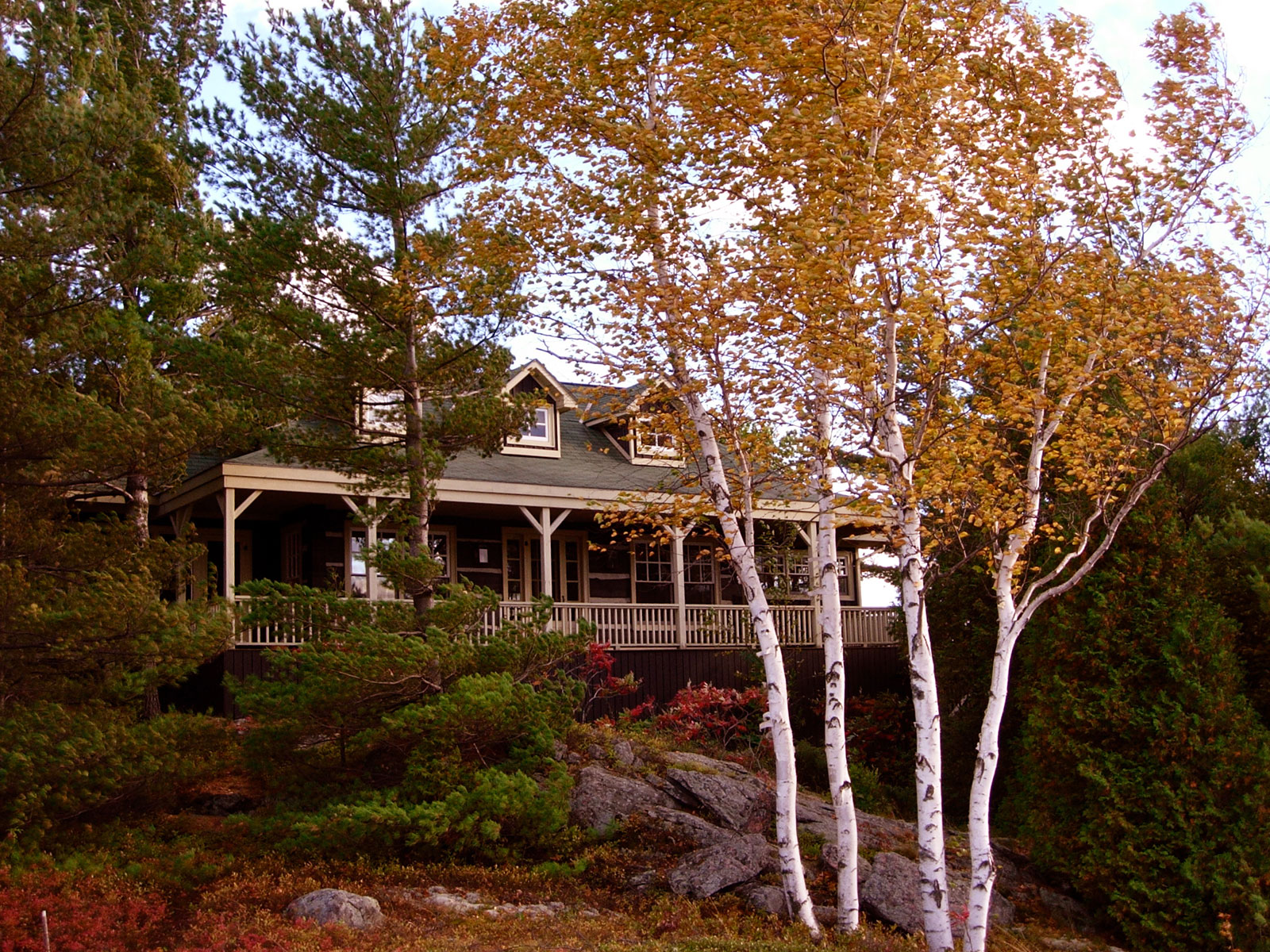 This is the front of our cottage from the water. The porch is covered and offers some stunning views of the spectacular sunsets we get. Built in the early '90s, it still has a traditional feel, helped by the fact that the main area was built with reclaimed logs from a barn in Northern Quebec.

Over the years I've had clients to the island for offsites, and given the setting it makes for a pretty memorable meeting. And a great place to party: Our son worked at Facebook in the early days and used to bring up 12-14 friends for the weekend from San Francisco. I'd host as chief cook, bottle washer and fireworks lighter. (Yes, I like fireworks.) 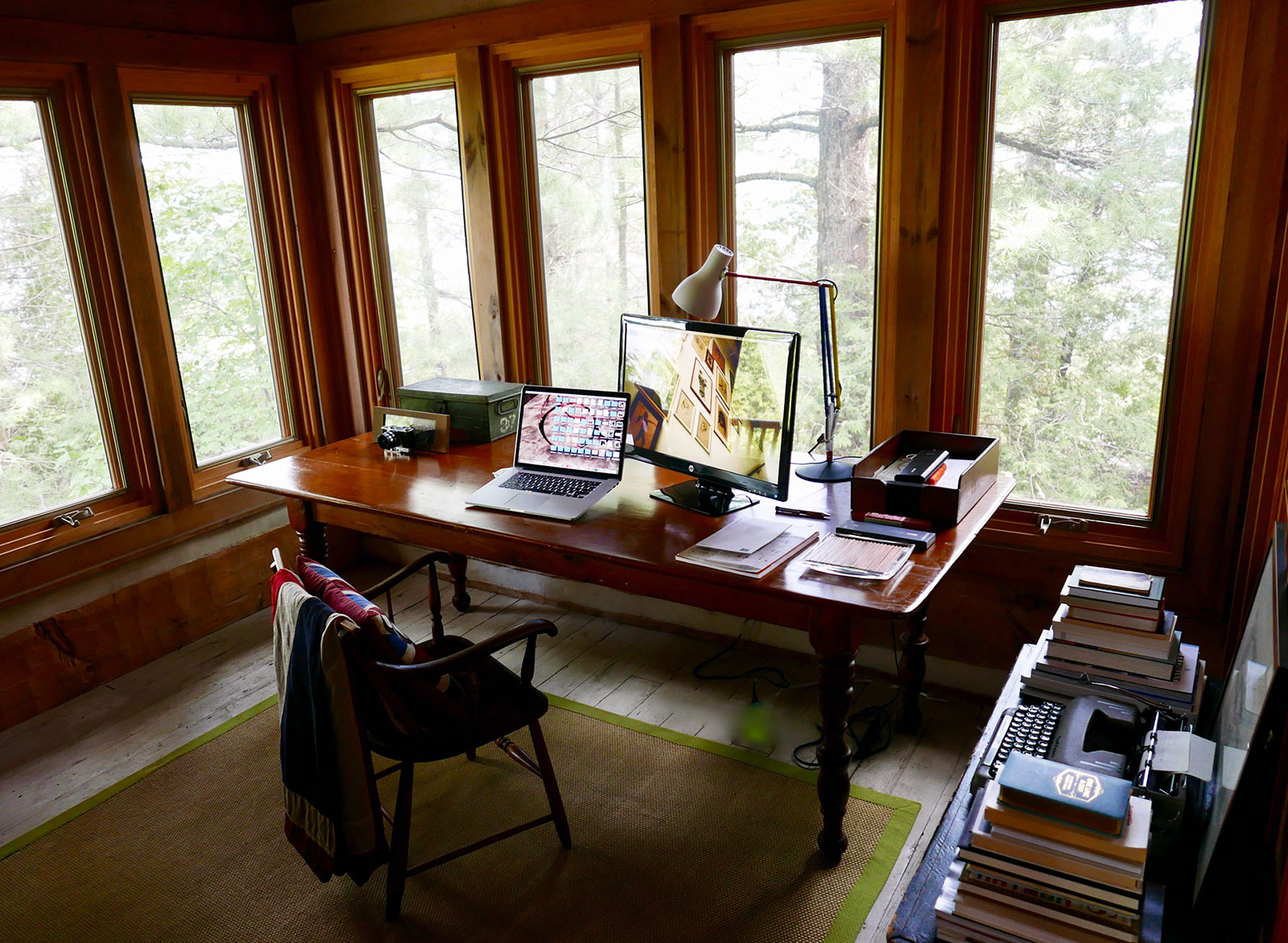 This is my office at the island. The table is pine and was in my parents' house as our dining room table. Five kids and my parents. I had small parents. The chair is also antique pine and belonged to my dad, as well as the green metal box from his time in the war. More flags draped on the back from my collection. And my mother's vintage Olivetti. The view from here is very relaxing no matter the stress of the day. Lucky me.

It's a very different vibe from the city, which is why I love it. It's also a wonderful place to do my "manly man" chores when I've finished my Disruptincy work. I'm a bit of a power-tool slut, so I have a lot of fun finding tasks to chase. I do things like building a Sea Flea (a very small speedboat), fixing docks, painting and endless maintenance, all of which I love. Then there's the boat house. Ah, the boat house. My happiest place on earth. Fiddling with the layout of my work bench, cleaning boats, fighting spiders, all while listening to music blasting through my 30-year-old powered speakers is heaven. Heaven. No neighbors to complain, just my wife (which is rare). Endless chores, that's what I love. A sense of accomplishment, no matter how mundane the task—something often missing from this business. 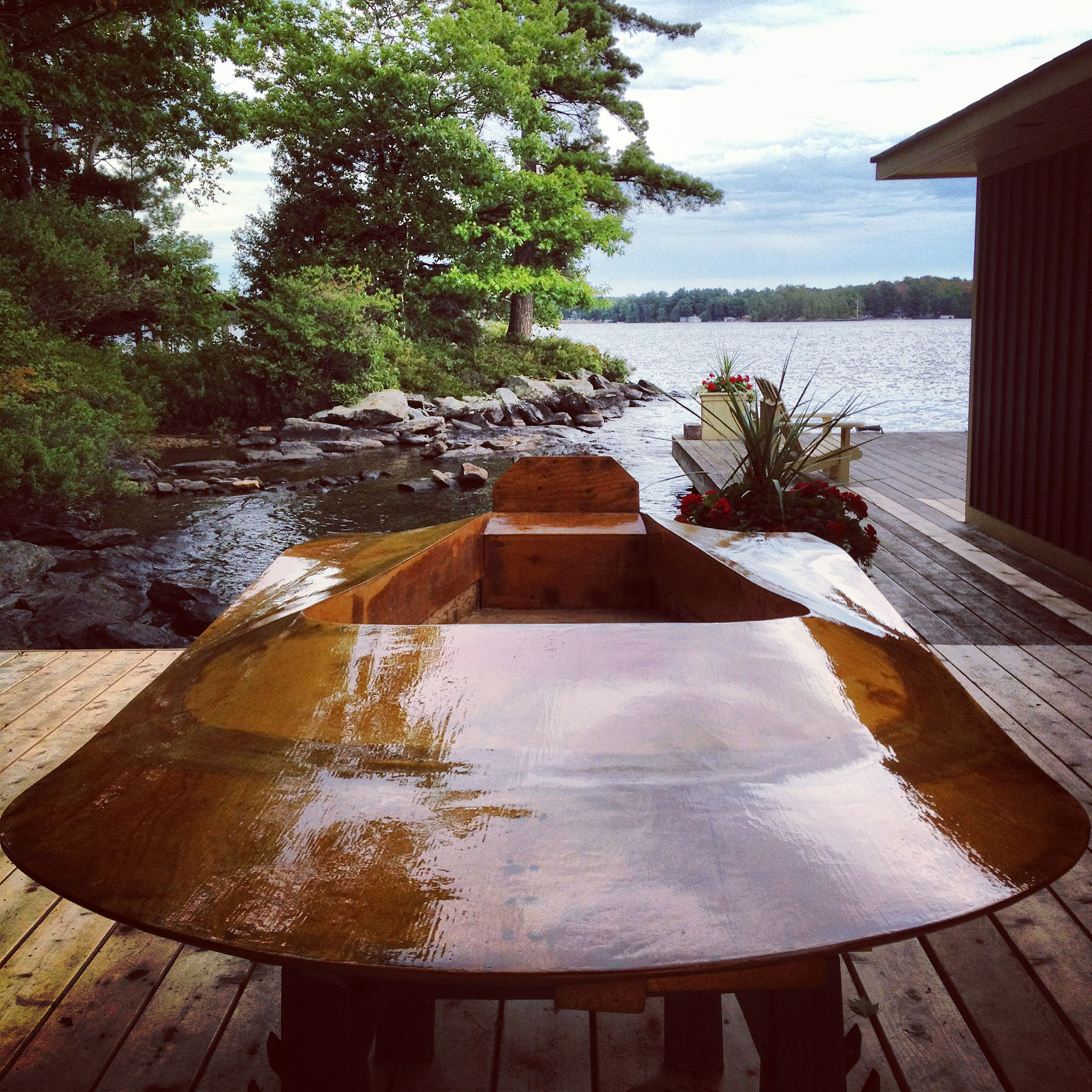 This is the Sea Flea I built for our youngest son Christian a few years ago. Endless hours not knowing what I was doing but then endless support from a website with folks on it who were happy to give you advice. Ah, the joy of the internet. 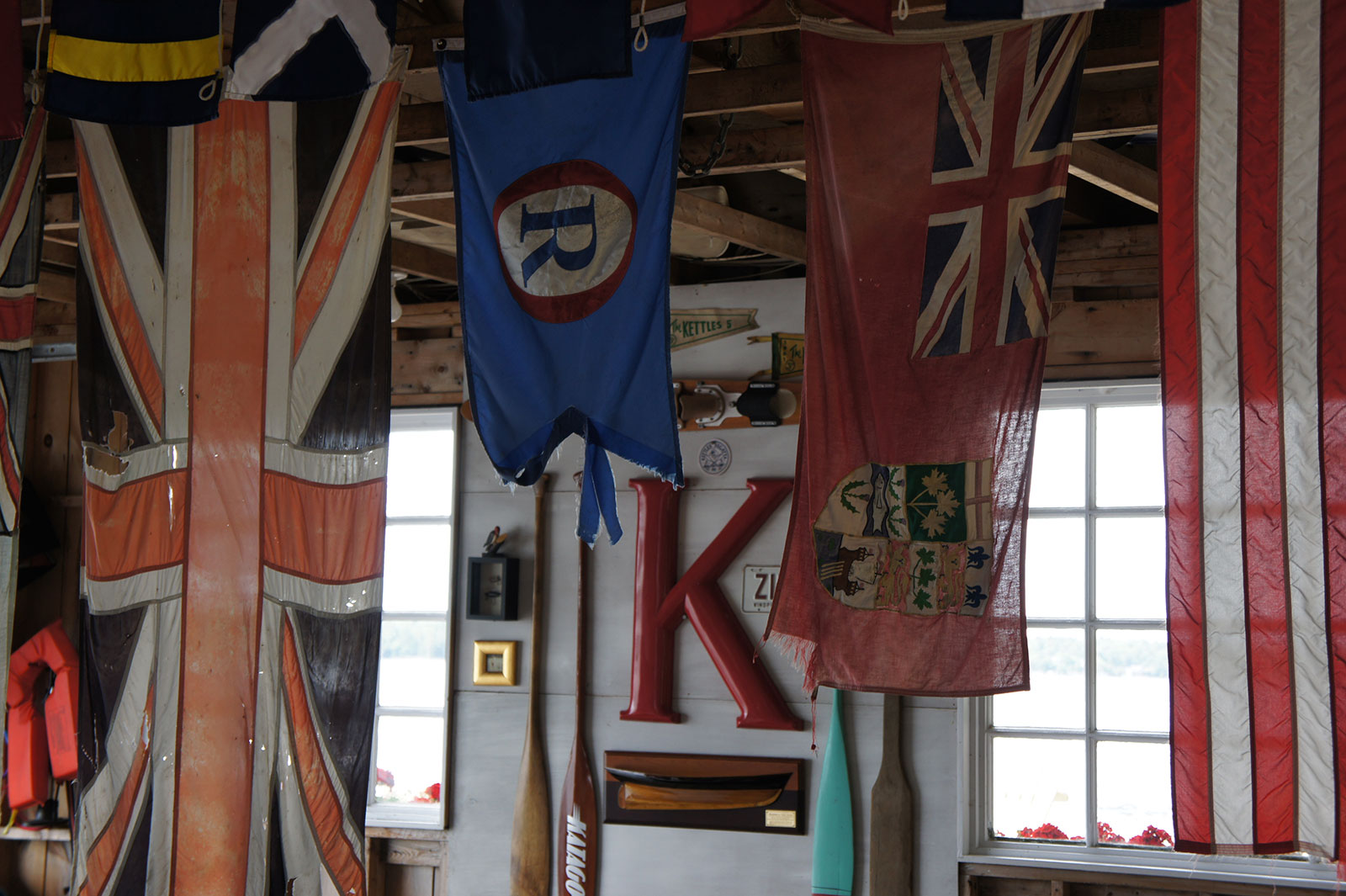 This is in our boathouse at the island. A never-ending work in progress. The wall has various mementos that mean the world to me. The boat hull below the "K" belonged to my late brother. The license plate to the right of the "K" is from my late father, who was a Zippo lighter salesman most of his life. The flags are very special. The really tattered U.K. one belonged to my parents. The one beside the "R" was also my dad's, and in fact is pretty rare so now resides in our cottage. All from many countries. I love flying them for the many visitors we have from around the world.

I feel very lucky to have these two very different places to work from. That's the joy of my world today—working from home, wherever that might be. 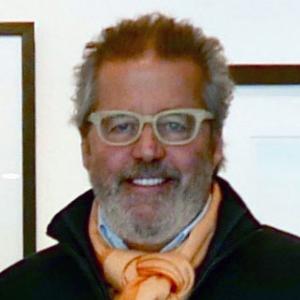