Twitter's TJ Adeshola on Tweets in the Bubble, Super Bowl Confetti, and the WNBA's #OrangeHoodie

Plus, endless love for his Georgia Bulldogs 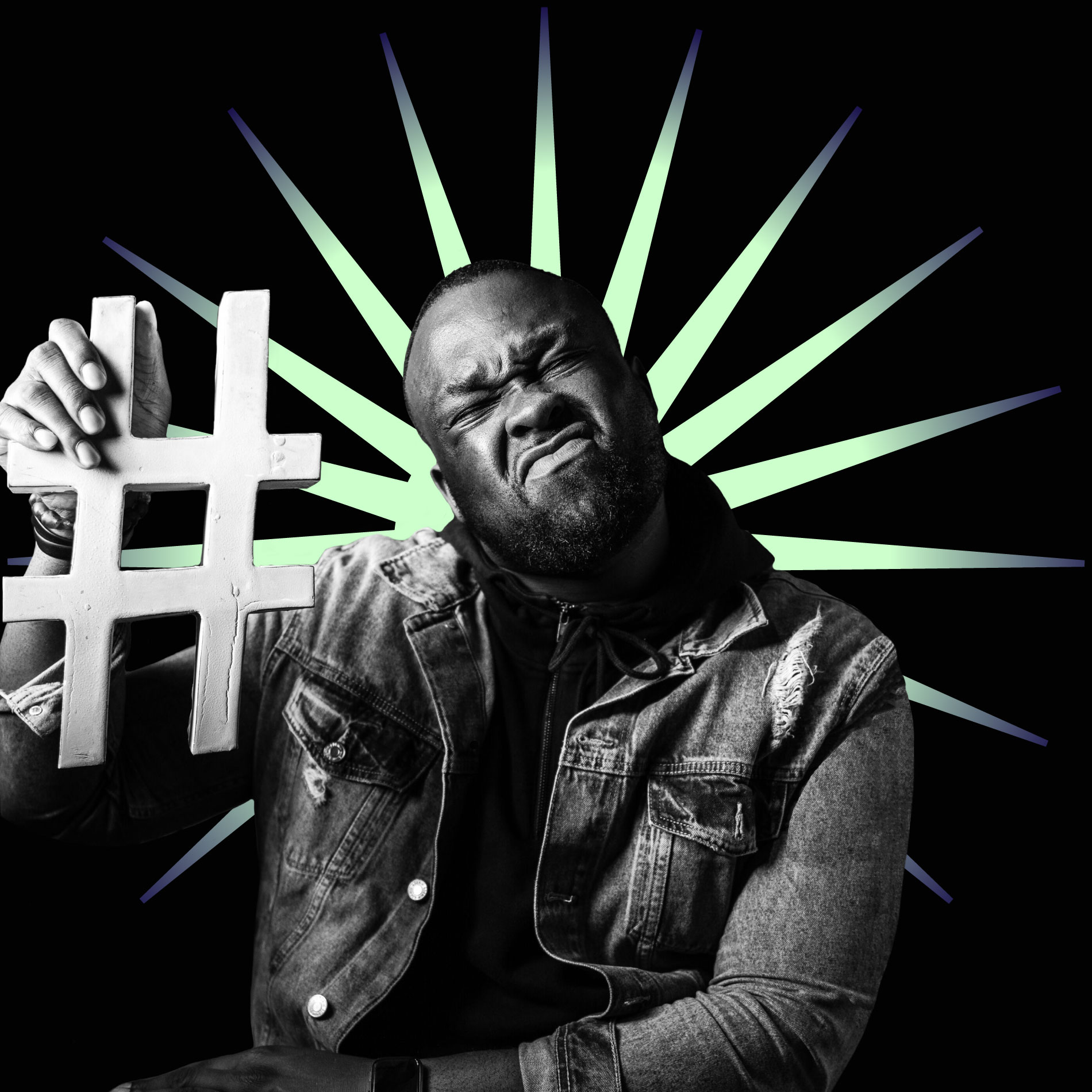 TJ Adeshola (@TJay) is head of U.S. sports partnerships at Twitter. In his role, he advises sports properties who are looking to Twitter to reach new audiences, monetize video content and "do cool and innovative shit."

Before joining Twitter in 2012, TJ worked in digital sales and marketing at ESPN, where he supported the company's digital properties, including ESPN.com and WatchESPN.

TJ is an advisor to Blackbirds (@Blackbirds), Twitter's employee resource group that celebrates and encourages diverse perspectives, and is also a member of Minorities in Sports (MIS). He is passionate about serving community programs supporting underrepresented youth, including DreamWakers and Harlem R.B.I.

We spoke with TJ for our Time-Out series, all about the thrill of competition, the glory of athletes and teams, and the world-changing power of sport.

My earliest/fondest sports memory was awe of the University of Michigan Fab Five. It was the first time I visibly saw the impact sports has on culture/lifestyle. Not only were the Fab Five the most iconic freshman basketball class of all time, they helped shape an era of basketball culture. The swag was infectious—black socks, baggy shorts and attitude. You really love to see it.

I always say, sports fandom hits different when you're either paying or have paid student loans (yes, the loans that have accrued a disrespectful amount of interest over time) to an institution. So this one is for my Dawgs ... the Georgia Bulldogs. When I was a junior in high school, I attended basketball camp at the University of Georgia and even made the camp all-star team. A few years later, I was walking the same hallways as a student at UGA.

It's a special and unrivaled experience watching the Dawgs play in Sanford Stadium on Saturdays (especially night games). The energy in the air, the passionate fans, the infectious culture/traditions—it's a vibe. Fun fact: ESPN's Maria Taylor learned all she knows from me at UGA … OK, OK, maybe it's the other way around.

I admire so many athletes, particularly those who keep the same energy on and off the court/field. They inspire me to leverage my platform to create impact, at work and outside of work. They push me to think "beyond the box score." The list includes LeBron James, Serena Williams, Maya Moore, Richard Sherman, Jaylen Brown, Kenny Stills, Renee Montgomery, Kelvin Beachum, Carmelo Anthony, Kevin Durant and so many others who inspire on a daily basis.

Also, as a product of a Nigerian household, I'd be remiss if I didn't shout out some of my "cousins" who are also of Nigerian descent: Giannis Antetokounmpo, Victor Oladipo, the Ogwumike sisters (three in the WNBA!), David Njoku, to name a few. Related, my favorite athlete of all time is Hakeem Olajuwon ... I use the number 34 for everything.

Your favorite sports shows or podcasts.

Black women in sports are blazing a trail. Kicking ass and taking names. So when I think about my favorite sports shows/programming—it starts with them. Jemele Hill has an amazing podcast called Unbothered, Cari Champion and The Arena on TNT, Take It There with Taylor Rooks, Ros Gold-Onwude launched a franchise during Covid called WYD and it's great, Chiney Ogwumike does it all—Certified Buckets podcast, a national ESPN Radio show … while playing in the WNBA, and my homie Maria Taylor on ESPN's College GameDay and NBA Countdown. Also a big fan of anything Bomani Jones does ... and Untold Stories with Master Tesfatsion.

Above the Rim. It had an all-star cast that included Tupac Shakur, Bernie Mac, Marlon Wayans, Leon, Duane Martin, even Bill Raftery ... and the soundtrack is ELITE. Damn, I might need to watch it again today! It's a true hoop love story.

I've gotta show love to Any Given Sunday, too. Al Pacino, Jamie Foxx, Cameron Diaz AND LL Cool J? Cmon! "My name is Willie … Willie Beamen!" Gotta be one of the catchiest songs in the history of sports movies.

There are two recent projects I'm incredibly proud of:

For the past few months, we've worked closely with the NBA to brainstorm tactics to bring fans closer to the game—specifically, the NBA bubble. Our solution was relatively simple—in lieu of fans in courtside seats, why not surprise and delight players and fans with "courtside tweets"?! This exploratory idea culminated in actual tweets displayed courtside for opening night of the return. @TwitterSports tweeted images and videos of #CourtsideTweets—and fans loved it! With #CourtsideTweets, the NBA's "Tap to Cheer" and the millions of tweets about the restart, Twitter became the roar of the stadium for the NBA return.

Your Tweets had the best seats in the bubble. pic.twitter.com/4fIwrcx5Cz

Superbowl LIV in Miami. As soon as the clock struck zero, confetti rained on the champion Kansas City Chiefs, as is tradition every Super Bowl. This year, Twitter and the NFL teamed up to make the confetti even more memorable. The result? We put actual tweets on the Super Bowl confetti. So while the Chiefs were celebrating their championship, they were showered with tweets of support and encouragement from themselves and fans. For those fans whose tweets made it on the field, our amazing @Twitter marketing/social teams responded with images of the fan tweets on the field! It was a really fun initiative; the tweets were so coveted that some have attempted to sell them on eBay! 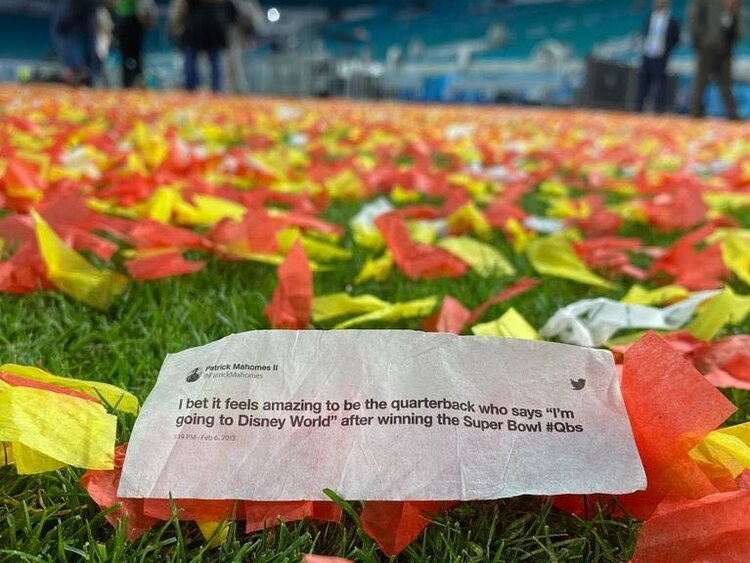 Most recently, I was extremely hype and inspired by the WNBA's #OrangeHoodie #InItForGood campaign. Not only did it generate well-deserved buzz around the WNBA's return, but it was a really dope show of solidarity across their NBA counterparts and the entire sports/entertainment industry at large. EVERYONE had an orange hoodie on. The timeline was filled with support, encouragement and even FOMO—folks really want the hoodie! So much so that it became the best-selling WNBA item in the league's 20-plus year existence. That's what you call an effective campaign.

The @WNBA IS BACK AND IM HYPE!

The W has been at the forefront of activism & social justice for years (way before the mainstream cosign). Oh btw, the hoop is elite AND they’re some of the drippiest folk 💧on the planet. #OrangeHoodie def hits different today 🏀🧡 #InItForGood pic.twitter.com/wfwSVEOvbr

I'm routinely impressed by the efforts of LeBron's folks at SpringHill and Uninterrupted. Their #GraduateTogether initiative, however, was truly special. Over 3 million high school seniors all over the country didn't get to experience a graduation ceremony due to Covid. Insert Graduate Together, a celebration to honor the high school graduating class of 2020. The virtual graduation was led by LeBron James—it featured a keynote commencement speech by Barack Obama in addition to powerful speakers and performances across entertainment, sports and music. We loved it so much at Twitter that we had to get involved; we partnered with @KingJames to launch a #GraduateTogether emoji (inspired by the 100 emoji) and a virtual watch party for the event.

Senior Class of 2020 I just want y’all to know that the graduation show we’re putting together for you @SpringHillEnt @GradTogether is going to be INCREDIBLE and one for the ages!! Love each and every one of you!! The FUTURE you are. 🙏🏾❤️👑

Lastly, BeatsByDre "gets it" ... they seldom miss. On July 6, Bubba Wallace tweeted #LoveWins in response to disparaging remarks. That same day, Beats by Dre announced they'd be signing Bubba to an endorsement deal, proclaiming, "No one should ever be asked to apologize for standing up for what's right." Bubba is a change agent. Beats acknowledged that and intentionally elevated his voice in support. Definitely one of my favorite recent examples of timely and purpose-driven marketing.

We weren’t going to announce this until later this week, but hate cannot win the day. No one should ever be asked to apologize for standing up for what’s right — we are proud to welcome @bubbawallace to the Beats by Dr. Dre family. pic.twitter.com/HeiC76MDle

Perhaps my favorite aspect of sports is the role they play in driving societal awareness and change. There are so many examples of real-world impact by way of sports, dating back to the raised Black fists at the 1968 Olympics or as recent as Colin Kaepernick and Bubba Wallace. Sports has this unique ability to make us more aware and enlightened ... or put differently, to make us better.

If I didn't work in sports, I'd have two professions that may or may not complement each other. I'd be a tenured college professor (I was a TA at UGA and i loved it) ... AND I'd drop a R&B/sing rap bop album. Just because I'm not in sports doesn't mean I can't dream and have ridiculously optimistic expectations of my chart-topping R&B/sing rap album.