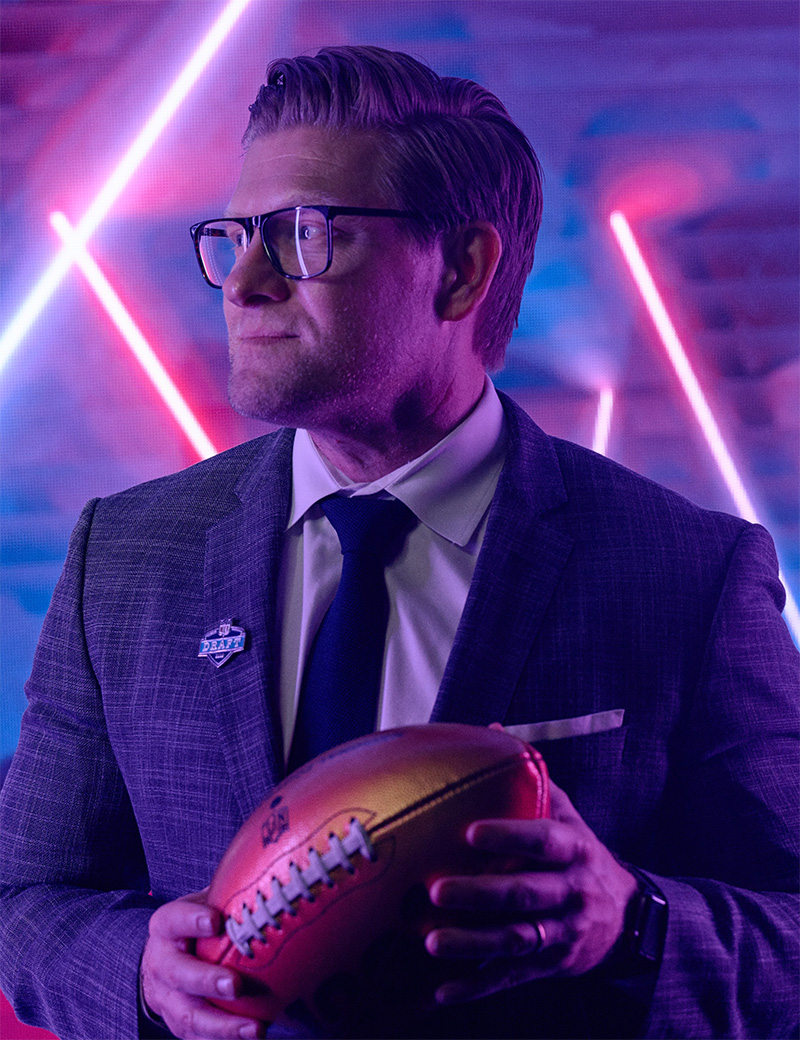 Ian Trombetta is SVP of social, influencer and content marketing for the NFL. In this role, Ian oversees the integration of social strategies and content development across all social platforms for the league, player, collegiate and club handles.

He is also responsible for developing an entirely new influencer marketing department with a mission of creating authentic initiatives which leverage the platform of the NFL to reach priority audiences. In addition, Ian’s Content Marketing Group is responsible for creating promotional assets that span across Broadcast, Digital, Social, Sponsorship, and more.

Ian joined the NFL from Activision Blizzard Inc., where he served as global VP of consumer marketing under the Tim Ellis, who is now the NFL's CMO. Prior to Activision, Ian was head of brand marketing at Red Bull North America. He spent the early portion of his career on the agency side at agencies such as TBWA\Chiat\Day.

We spoke to Ian for our Time-Out series, where we chat with folks in the sports world about their favorite athletes, teams, sports movies and shows, and their love of sports generally.

I was born in Pasadena, California, and spent most of my childhood in San Diego County. As of the past seven months, my wife and I live in Tribeca, NYC. I often get asked the question—which coast do you prefer? The answer is BOTH. The best days in New York are unlike any city in the world. However, the quality of day-to-day life in L.A. is pretty good as well.

My favorite sports memory was back in 1992. My best friend was fighting cancer and the Make-A-Wish Foundation reached out to his family. His wish was to go with me to visit the original Dream Team while they were practicing in San Diego. And yes, this was THE DREAM TEAM with Michael Jordan, Magic Johnson, Larry Bird, Charles Barkley and all the other legends. We were the only ones allowed in the gym along with his mom, and we watched them practice against each other. Then it got even better …

The best college players of that era arrived to scrimmage the Dream Team. This included Chris Webber, Grant Hill, Penny Hardaway and several other future NBA stars. We heard rumors that they actually beat the Dream Team the day before, and we were really excited to watch the rematch. Needless to say, the Dream Team put on an absolute display of excellence that I will never forget. More importantly, it was one of best moments that my best friend John and I were able to spend together.

Pretty much all things Pittsburgh. My dad was born in Aliquippa, Pennsylvania—a well-known football factory—and actually went to high school with Mike Ditka. When I really think about it, I mirror my dad in virtually everything I do. My sports allegiances are just another example of how much he has helped shape me even as an adult.

My favorite of all time is Troy Polamalu of the Pittsburgh Steelers. An incredibly instinctive player who epitomized the essence of being team-first.

I am really into Lex Fridman these days. He is someone that approaches every podcast with a level of empathy and positive intent that I feel we all could utilize in our interactions online and in person.

Hoosiers. I remember watching that movie in the theater with my best friend, who died a few years later from cancer. It was a movie full of underdogs and imperfect heroes that I could relate to, and they ultimately achieved what many thought was impossible. An incredible true story of hard work and perseverance.

I try not to look at things on only a project level and more from a holistic brand health perspective over the course of the year. That being said, if I had to choose one, I am particularly proud of the work we have done recently around our cause marketing efforts. Specifically with My Cause My Cleats, where we highlight the charities that each of our players celebrate during the season. This year, we had over 1,000 current players participate, and we created an entire 360 program around the initiative.

My Cause My Cleats

I really thought Pepsi did a great job with extending the most recent Super Bowl Halftime Show in L.A. The excitement for this particular show was unlike anything I have seen since joining the NFL and Pepsi did a wonderful job of building excitement with their announcement as well as their assets featuring the five prominent artists, led by Dr. Dre.

Sports, and football in particular, naturally breaks down barriers. There was a recent CNN article that highlighted the rarity behind the NFL bringing both red and blue states together. I believe there is some level of truth to that, and we embrace that responsibility. That's when sports are at their absolute best—bringing different communities together.

I would be working on a disruptive brand that is probably like some of the ones I have worked on prior to the NFL. In my spare time, I would be actively monitoring everything related to the league and the Steelers. 😊