Plus, the triumph of MLB's Field of Dreams 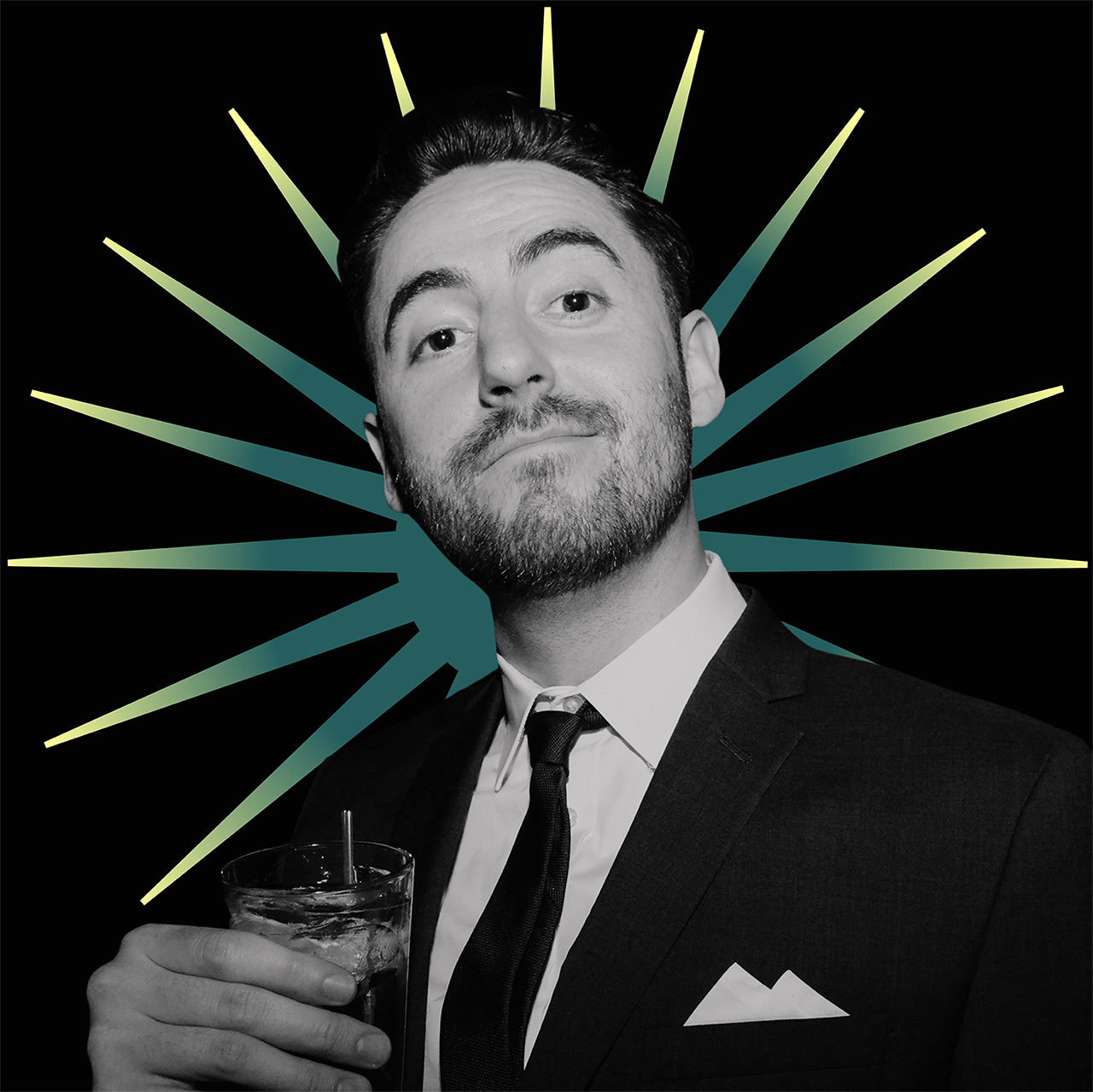 Jay's experience includes full-time and freelance stints at other New York agencies such as McCann, Grey, Pereira O'Dell and DeVito/Verdi. He has worked on DirecTV, Verizon Fios and Fox Sports 1, among other accounts. Jay graduated from the School of Visual Arts in 2007 and now teaches advertising there as he slowly earns back his college tuition.

We spoke to Jay for our Time-Out series, where we chat with folks in the sports world about their favorite athletes, teams, sports movies and shows, and their love of sports generally.

Grew up in the northeast suburbs of New Jersey in a town called Teaneck. Just a stone's throw away from Yankee Stadium (or, an Aaron Judge throw home). Currently live in Williamsburg, Brooklyn. Not far from where the Nets play, but I'm a diehard Knicks fan, so let's just say a 34-minute Citi Bike ride to Madison Square Garden.

When I was a kid, before I even became a sports fan, I was in Little League baseball. I was barely interested in playing, so I was mostly just goofing around all of the time. My best friend took it a little more seriously and was a perennial fixture on the all-star team. He was also a really good pitcher who could strike out anyone. Everyone except me. Because every time I stepped up to the plate, I'd make silly, stupid faces at him. He was always laughing so much, he couldn't throw strikes.

Typical kid from North Jersey sports fan—Yankees, Knicks, Giants. What I love most about them is their illustrious history, their inherent New York City toughness, and the fact that they've spared me from a lifetime of pain and personal anguish in supporting other area teams like the Mets and the Jets. Although the last 20 years of being a Knicks fan haven't been great for my mental well-being.

If I base it on the jerseys I have in my closet, it's Patrick Ewing and John Starks from the '90s Knicks and Bernie Williams from the '90s Yankees. While I don't own a jersey, I definitely gotta throw Eli Manning some love for thwarting Tom Brady and the Patriots' perfect season bid back in 2007 and denying Brady another ring in 2011. Also, I never got to see him as a player, but I'm a huge fan of Walt "Clyde" Frazier's color commentary for Knicks games. As a word nerd, I've always enjoyed his "Clyde-isms" (e.g., "Shaking and baking," "Bounding and astounding," "Winning and grinning"), but I also love his affinity for obscure vocabulary. If I ever use the word "lilliputian" or "neophyte," just blame Clyde for your trip to dictionary.com.

Does Squid Game count as a sport? Just kidding.

While the profanity-laden conniptions of Happy Gilmore will always hold a special place in my heart, I think I've gotta go with Space Jam as my favorite. It was tough to root for Jordan, since he was such a Knicks nemesis, but when you pair up the best basketball player on the planet with Looney Tunes—and Bill Murray—to fight aliens in a basketball game, it's a slam dunk in my cinematic universe.

As for video games, it's gotta be NBA Jam. It was the only game in the arcade that could pry me away from my early adolescent bloodlust for Mortal Kombat. Plus, it had all the great announcer exclamations like "He's on fire," "Monster jam!" and the mother of them all, "Boomshakalaka!"

As a sports fan, I'm always excited when a brief comes along that has anything to do with sports. But sometimes the brief doesn't come on Google Slides. It comes from life itself. When the NBA announced it would resume the pandemic-altered 2019-2020 season in a bubble, I was thrilled. I was a little less thrilled when I learned the Knicks weren't invited because of their terrible record. But I was completely floored when I heard the biggest issue of all: No fans allowed.

My feelings were only reinforced when a reporter asked LeBron James about the idea of playing games without fans. He said, "Nah, it's impossible. I ain't playing." Because the simple truth of the matter is, the fans need the players, and the players need the fans. One without the other, and you're missing one of the most important elements of sports: joy. This fed into the whole brand philosophy of our Michelob Ultra client and their tagline, "It's only worth it if you enjoy it." So, when the sports world was faced with the prospect of games without fans, we thought, "What can we do to bring fans and players together safely and keep the joy flowing?"

And that's where Michelob Ultra Courtside was born. Instead of having fans in physical attendance, fans were beamed in virtually on 17-foot video boards surrounding the court. It was a Herculean effort from an all-star team of incredibly talented and dedicated individuals, and I couldn't be prouder of the work we did together. I even got to attend one of the games as a virtual fan. I made sure to wear my Knicks jersey, but I was also kind of ashamed that they weren't invited to the bubble, so I wore a paper bag over my head.

I already make sure to DVR all Yankees, Knicks and Giants games. But I double-checked to make sure everything was set for recording the Yankees game on Aug. 12, 2021. Because it was the MLB at Field of Dreams game. It's been said you can't hit a home run without swinging the bat. But I think it's just as important to make sure you swing for the fences.

We pitch a lot of ideas that can sometimes seem a little too ambitious or audacious, but even if they don't always reach the crowds, we keep swinging. And whoever held the bat for the Field of Dreams game, congratulations. This one was a no-doubter. As a concept, it's borderline insane: Building a pop-up MLB stadium in the middle of a cornfield in rural Iowa for ONE regular season game. I can only imagine the look on the faces of whatever execs were involved when this idea was originally pitched.

But thematically, it was perfect. I don't think I've ever even seen the Field of Dreams movie in its entirety, but I certainly remember the famous quote, "If you build it, he will come." But they built it. And players, fans and the entire country came together as one to witness a baseball game unlike anything ever seen before.

And the execution was impeccable. Seeing Kevin Costner and the players emerge from the cornfield still gives me goosebumps. It was just like watching a movie. However, I'd like a rewrite on the ending. Watching Tim Anderson's walk-off home run disappear into the cornfield wasn't the Hollywood ending Yankees fans were hoping for.

There was a campaign for Sports Illustrated from back in the day that has always stuck with me. It shows dramatic and beautiful photographs of various sports moments with small lines of type laid out over the scene.

One execution shows a pair of schlubby-looking guys sitting in the nosebleeds watching a football game. The copy is positioned over one of the guys and reads, "He knows the alma mater for all 72 players. He knows the exact day Kosar threw for 489 yards. He knows what Jamir Miller eats before a game. He thinks his wife's birthday is sometime in May." The tagline says, "You may not get it, but our 21 million readers do." 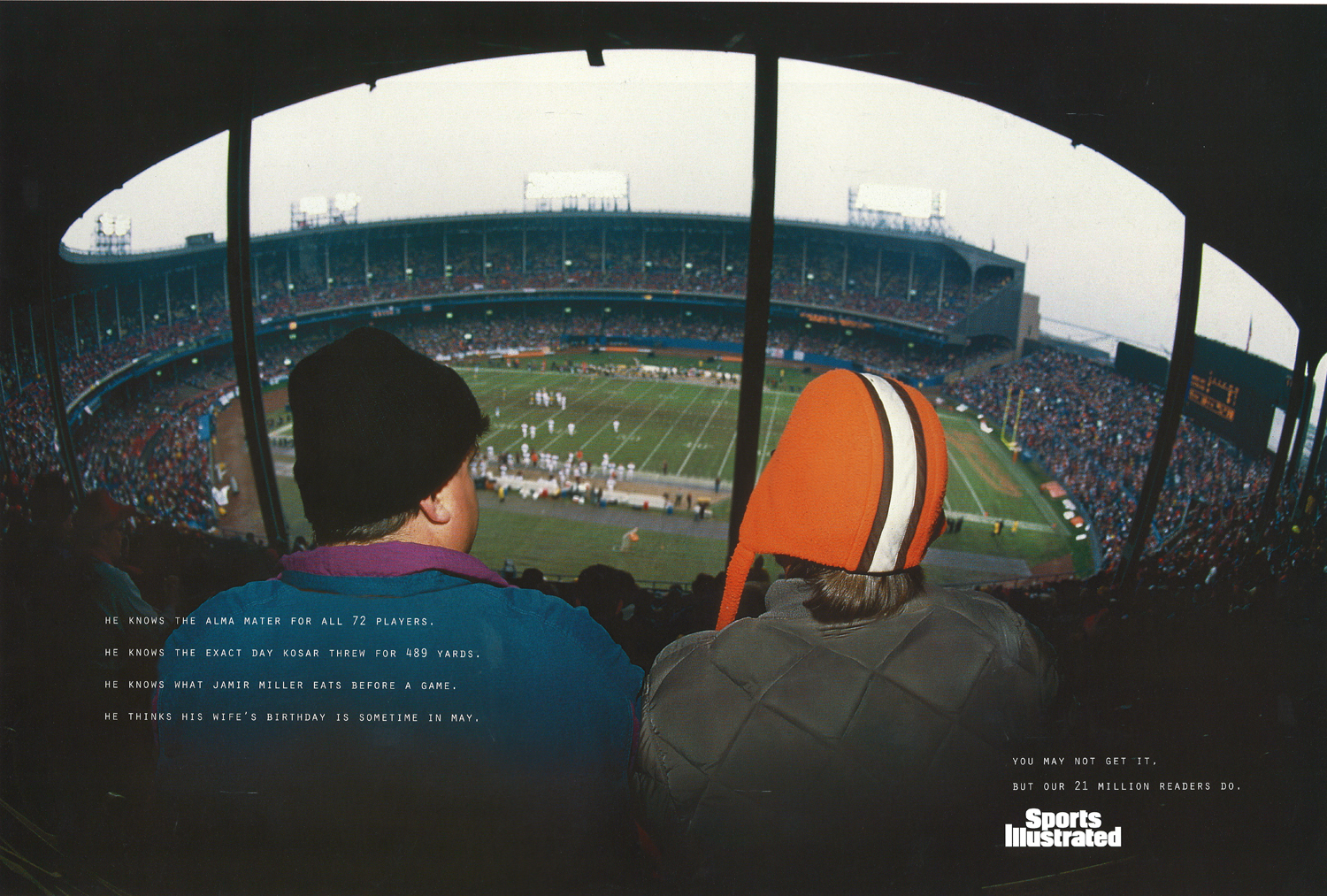 And that's a real human truth about sports. The fervent and fanatical passion those 25 million readers (and beyond) have for what is essentially people just running, jumping, throwing, catching, dribbling, shooting, swinging and sliding.

But there's a special, ineffable element that plays out in sports which elicits our deepest emotions in their purest form. Emotions that manifest as joy, frustration, love, hate, exhilaration, devastation, obsession—and sometimes uncertainty when trying to recall your wife's birthday.

I've always had a thing for doing voices. I once thought a shortcut to get close to the sports world would to be a public address announcer or a play-by-play guy. I would even sometimes mute the TV during Knicks games and do commentary as Marv Albert. But if the sports world option isn't in orbit for this question, maybe I'd be doing voices for cartoons. If they end up doing another Space Jam movie, somebody hit me up. Voiceover reel available upon request.