The Super Bowl is the prom night of ad land. You spend ginormous amounts of money, get your hair did, and prep your shiniest array of cultural references, production values and stars.

But unless somebody falls down during halftime, the results are often depressing, the equivalent of doing all that just to spend two hours waiting in the photo line: Sometimes the work is funny; mostly it's breathlessly overdone and, in the aggregate, feels like one long series of cameos in the same sitcom.

Then—because not everyone can spend $5 million on an ad, Christ!—there's the stuff that happens around the event, marketing strategies in themselves. These are usually equally smarmy, a pony show of banned ads and pseudo-banned ads (we cringe at the memory of GoDaddy, but feel a tingly nostalgia at Cards Against Humanity's potato).

This year, MoonPie and agency Tombras Group of Knoxville, Tenn., didn't pretend they had banned ads to punt. They barely referred to the Super Bowl at all, but alluded to it in a narrative that was, in many ways, all the more compelling because it was so undemanding and underproduced.

Omg my boss just said I could actually make #TheBigThing spots but we can’t run them on tv bc it’s too expensive or whatever and now I have to film them all today I am so scared https://t.co/5od8n770Rf

Its 2019 Super Bowl-concurrent campaign, hashtagged #TheBigThing in a reference-non-reference to the Big Game, was actually an extension of what they did in 2018—when they wrote a bunch of super-weird Super Bowl ad scripts in the same trademark style as their community management tone of voice.

Below is one for an ad called "The Family." 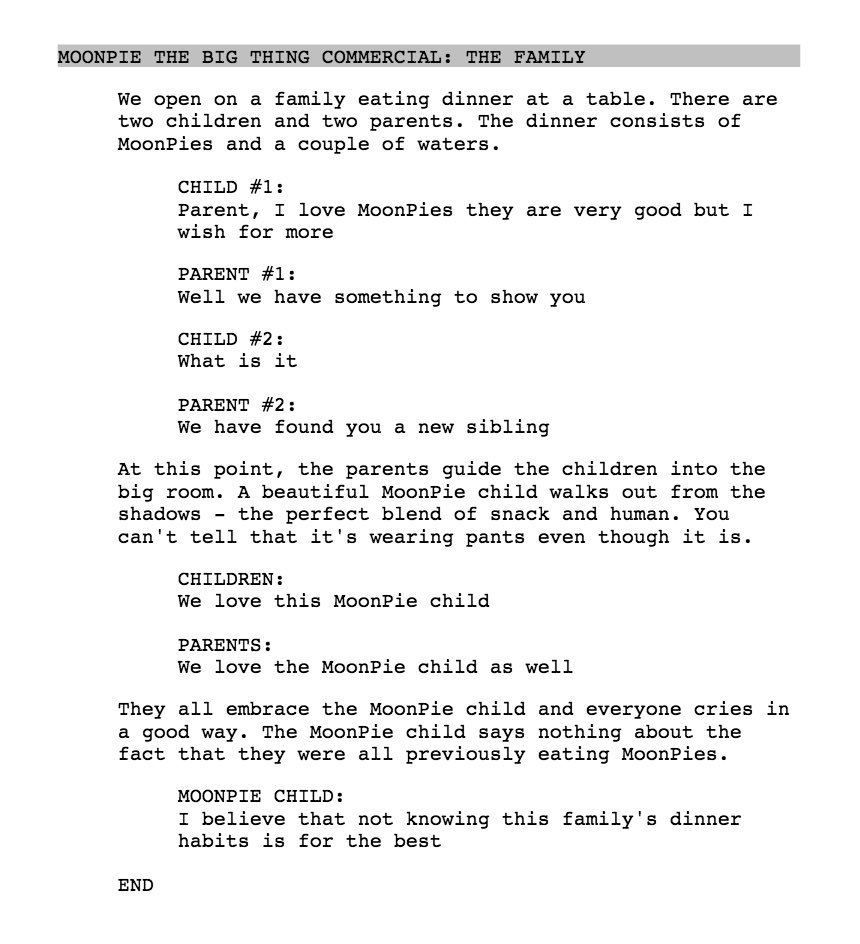 The script defies logic. It sounds like something a sleep-deprived person pushed out in a haze (someone actually asked whether it was a fever dream … to which MoonPie answered, "Yes"); it's enough to make Adult Swim pink with jealousy.

It tells the story of a nuclear family having a dinner of MoonPies. When the children robotically wish for more, the parents present a gift: a new sibling, which is also a Moonpie.

"A beautiful MoonPie child walks out from the shadows—the perfect blend of snack and human," the script reads. "You can't tell that it's wearing pants even though it is."

"Tbh I have no idea how I'm going to make this MoonPie child," the brand fretted.

Happy commercial time here is the one called “The Family” and I hope it makes you want to buy one or more MoonPies #TheBigThing pic.twitter.com/3NgLMEythP

There's a lot that's impressive about this work. To start, it's taken that distinct written voice and found a way to transmit its not-quite-human nature to audiovisual.

The result is impressively produced, but not in a flashy way. (It's mostly impressive because it happened at all.) Part of this has to do with what the brand primed you for noticing: The MoonPie child really is wearing pants, and you can't tell.

And that Twin Peaks-inspired MoonPie baby voice, coupled with that last unscripted scream as the family consumes its species, leaves us with an amusing sense of dystopia, objectively the opposite of what we felt after all all those future-themed Super Bowl ads.

In the next ad, "Space," MoonPie manages to compare the stakes of community management to that of an astronaut. Here are the both script and the spot: 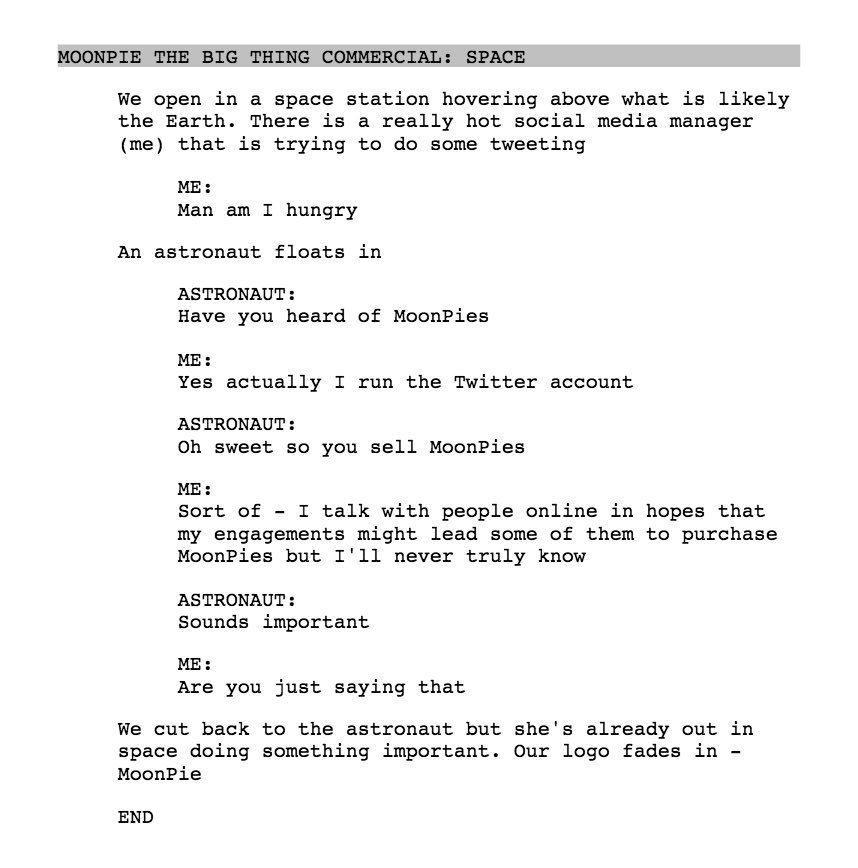 Here is the commercial called “Space” please buy a MoonPie as soon as you can #TheBigThing pic.twitter.com/1Xx7EbmqtL

The last ad, "The Study Sesh," depicts two women and a man in some kind of study session. There are MoonPies beside them and the statue of an owl, which takes on outsize importance as the ad progresses.

You can actually see the brand breaking apart the structure of contrived trueish-to-life ad scenarios, melting them down into something surreal but no less unbelievable. We're reminded of how strange the world we're asked to believe in, and relate to, really is. 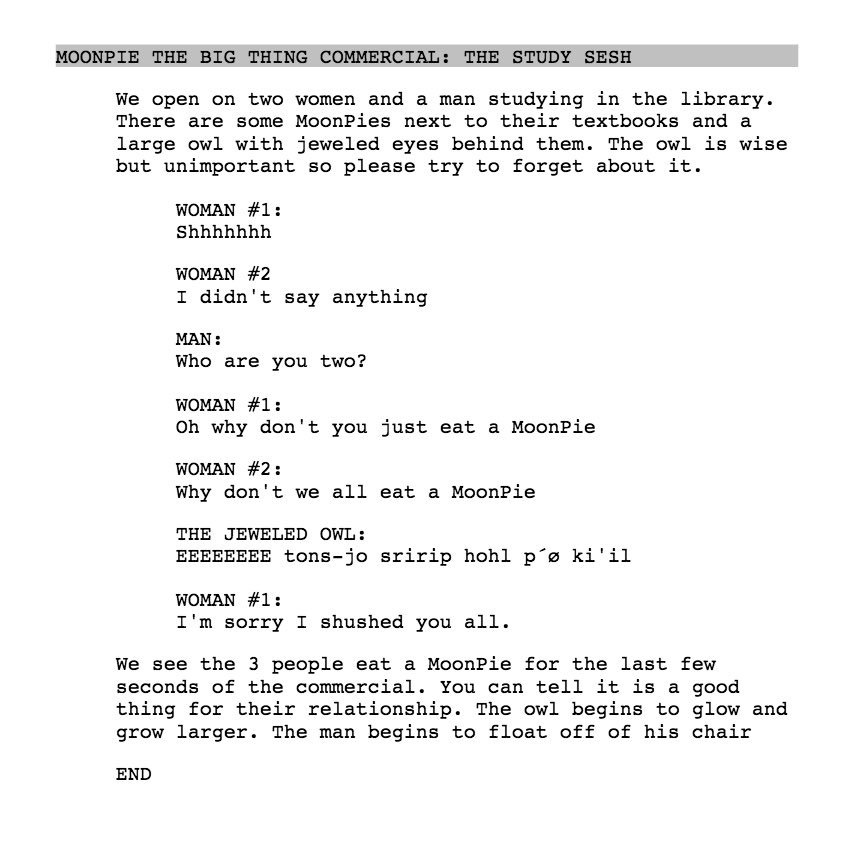 This commercial is called “The Study Sesh” you can ignore the owl #TheBigThing pic.twitter.com/cbmu0rvDYj

We don't want to get too "Lucy in the Sky with Diamonds" about this, but MoonPie … are you trying to tell us to quit our jobs?

Is our life an apocalyptic waste?!

We'll get back to that question sometime after tax season.

Tombras Group has helped to lift MoonPie sales despite "no new product innovation, no significant distribution increase, and no discounting going on. And there's no TV advertising," evp Dooley Tombras said, for good measure, to Fast Company in 2017.

Here's a cute story: Tombras' own grandfather and father pitched MoonPie—and failed to get the account!—40 years ago. When Tombras pitched with his father decades later, it was to the son of the man they'd pitched back then.

At the time of Tombras' FC interview, sales of MoonPie had rised 17 percent. The reasons for that boost—attributed only to social—are magnified during the Super Bowl.

What's special about MoonPie? We know why we like it (in addition to its marshmallowy goodness and lamblike softness): It breaks the fourth wall of community management, speaking with a deconstructed brand voice. It's as if whoever's running it is a Snapchat-addled refugee from the "Dunk in the Dark" days, when CMs were pushed to the limits of exhausting, real-time cleverness, forever forced to straddle the line between smart and unerringly positive, their voices forever coupled with breakneck creative.

MoonPie doesn't care much about being positive. It also doesn't pretend to live in a world devoid of other brands: It pokes at some, plays with others. And it's developed an online reputation for splashing its corner of the internet with low-budget, left-of-center memes, in keeping with an editorial style that feels vaguely obtuse or a hair underwritten—like a weird missive from somewhere deep within Reddit.

But you can also tell whoever's back there is a master with a sense of continuity: This whole bot-read script thing riffs off another story arc in the MoonPie CM epic. In July, the brand released the following tweet, itself a riff off people trying to teach bots to do creative things:

There were a lot of creepy robot references on Super Bowl night. Most tried way too hard (not unlike this gushy article), leaving us with a dystopic sense of emptiness (and not that "fun!" dystopia they were actually aiming for).

MoonPie doesn't shy away from that sense of darkness we sometimes feel closing in around us: the tech-fatigue, the overly eager community managers (nearly robots themselves), a certain dehumanization of humans, the over-humanization of brands, the overproduced leaps for our attention.

It has understood something: We're tired. We don't want to be asked to engage for more swag, pretend brands are something they aren't, or argue about the political authenticity of that Handmaid's Tale season 3 trailer. We're tired of worrying about food we eat and the impending end of everything. And when every choice we make seems existential, we don't want to be asked to choose whether we're loyal to MoonPie or Pop Tarts.