Ryan Reynolds continues to run rings around traditional advertising, and this time he has his sights set on the biggest stage of all—the Super Bowl.

In November, Reynolds became the owner of Mint Mobile, a brand that advertised on last year's Super Bowl. (You surely remember its chunky milk spot, whether you want to or not.) Now, Reynolds has announced he is bringing Mint Mobile back to the Super Bowl—just not with an in-game spot.

The actor on Wednesday bought a full-page ad in The New York Times to declare Mint's plans for Super Bowl Sunday. Crunching the numbers, he quickly figured out that the $5 million price tag for a spot on the game could fund over 300,000 months of Mint Mobile service—which goes for just $15 a month.

So, instead of buying a spot, he's offering three months of free Mint service to anyone who signs up online between the kickoff and the end of the game on Sunday. 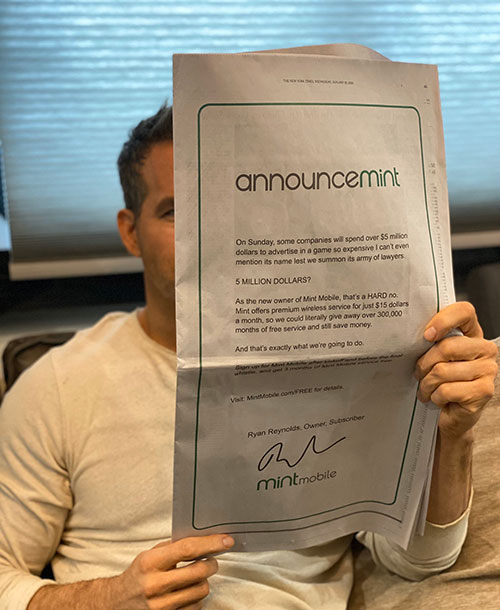 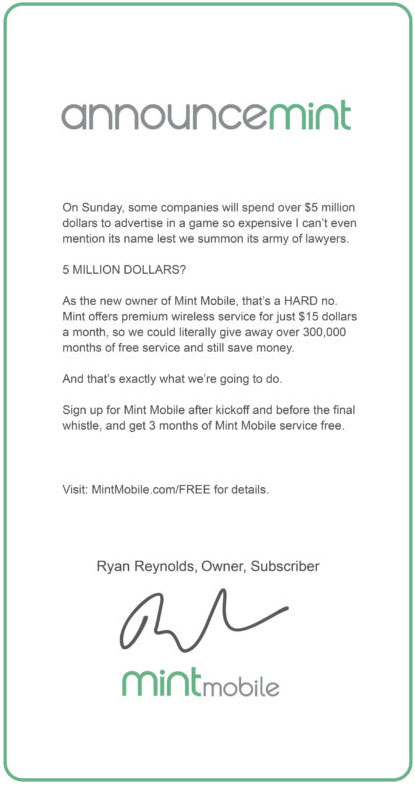 "I love ads. Except when they cost 5 million dollars for 30 seconds of airtime," Reynolds sayd. "Mint Mobile is premium wireless for an almost suspiciously great price. So instead of creating a pricey ad trying to convince people to try Mint, we're going to let them try it for free."

There's no language on the site about a limit to the number of people who can take advantage of this offer. And anyway, it would take well over 100,000 people to sign up before hitting the $5 million mark, the going rate for a 30-second spot.

The stunt is a bit reminiscent of something Esurance did in 2014 that got an enormous response from viewers. The online insurance brand bought the first commercial slot after the game ended—which was $1.5 million cheaper than an in-game spot—and offered to give the money saved to a lucky viewer who tweeted the hashtag #EsuranceSave30.

Reynolds, of course, is a master at drumming up PR with clever marketing tricks. His creative involvement in the advertising for the Deadpool movies is well known, and his Aviation Gin brand is one of the most culture-busting marketers out there these days.

oh so now he's just going to do our jobs better than us with none of the existential baggage??! https://t.co/Eix6bqQFHA