Because it's tougher to win on the road

In sports, home-field advantage can be a key factor in determining victory. Soccer magazine Libero adapts that concept in a campaign developed with creative shop David Madrid that uses team and individual player statistics to encourage Spaniards to stay home during the coronavirus pandemic.

"It's Easier to Win at Home," ads proclaim, presenting stats from clubs such as Real Madrid, and stars Lionel Messi and Jan Oblak, to illustrate that point. The work touts free access to Libero's online archives while pro sports take a pause. 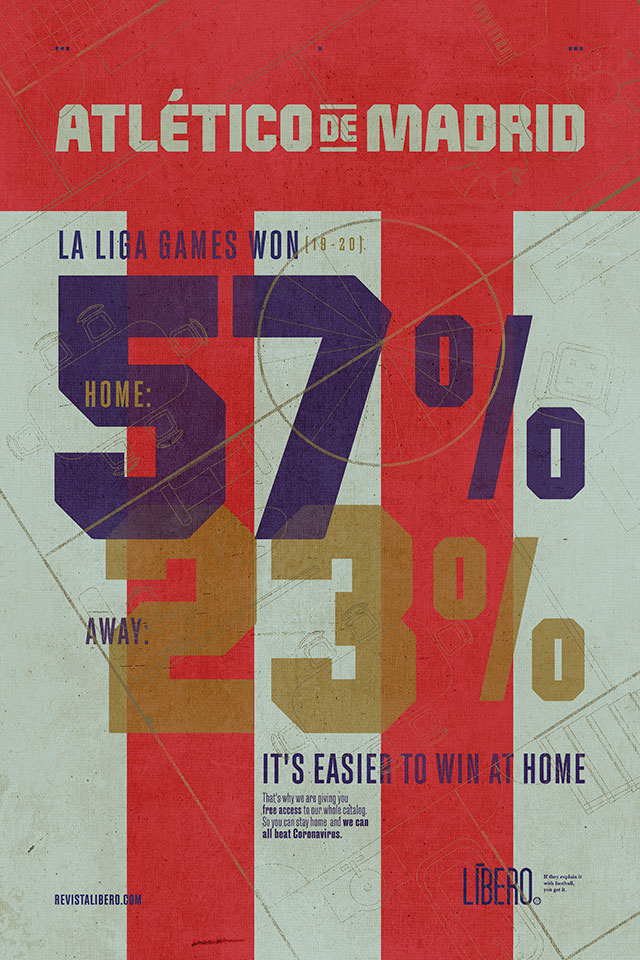 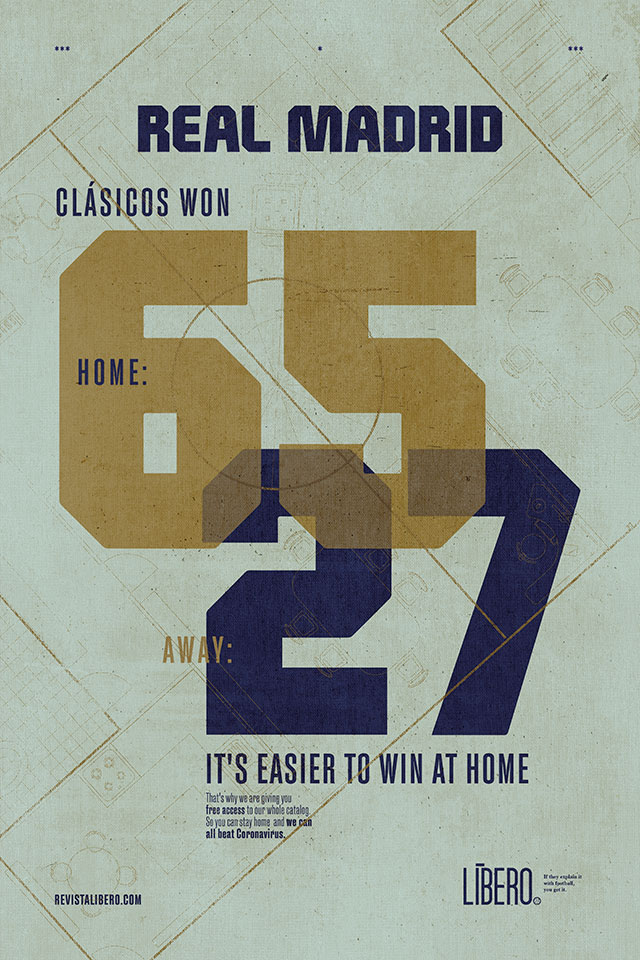 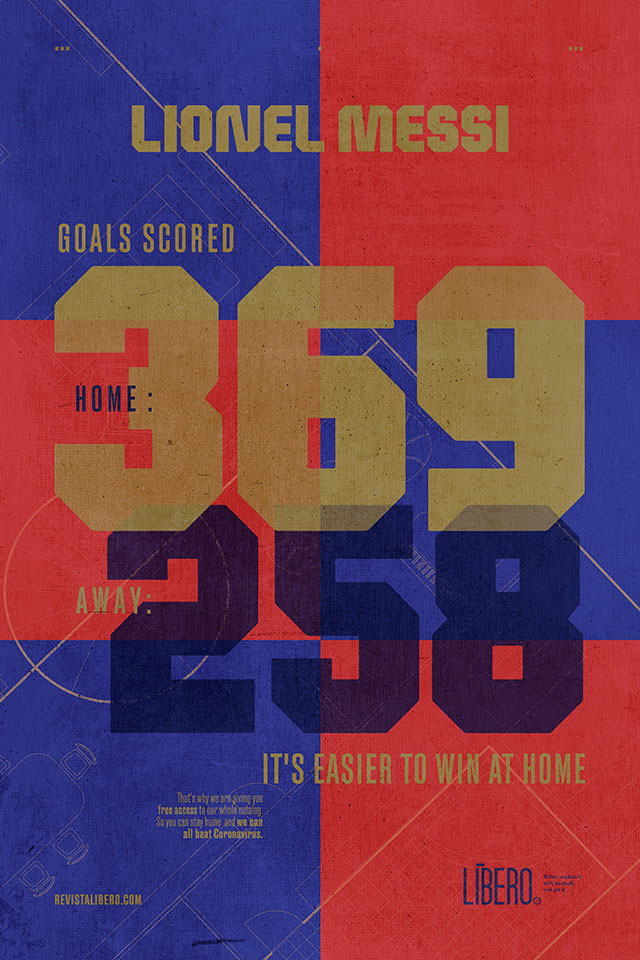 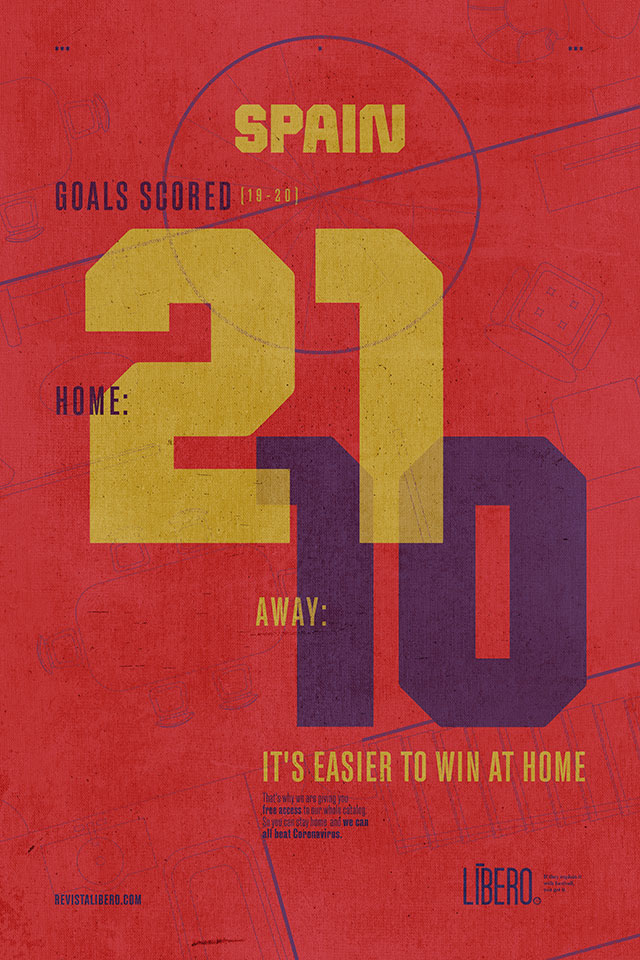 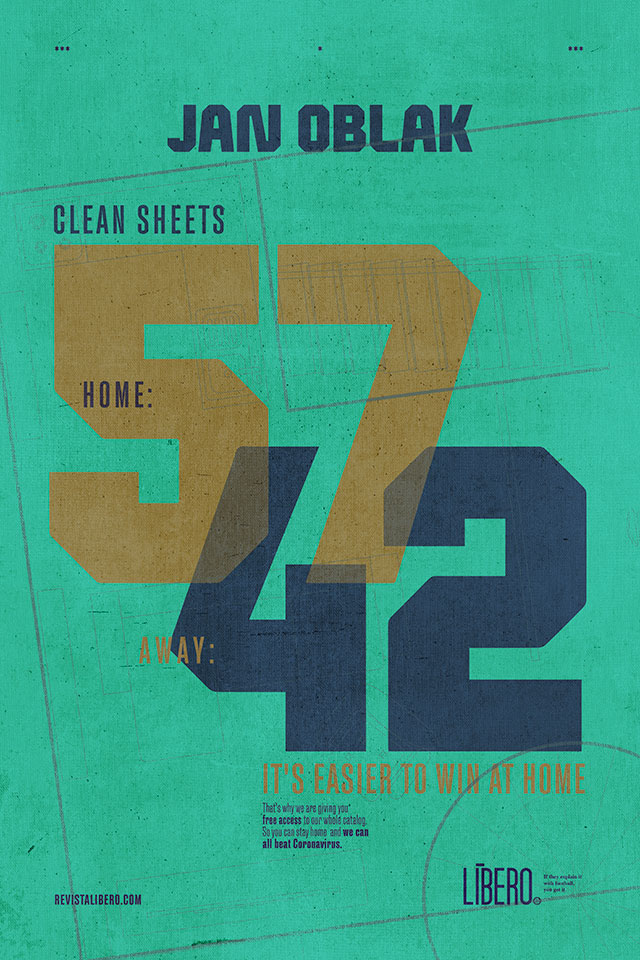 Guess they should bench Messi on the road. Not!

"The client asked us to create something simple and fast on their social media channels," David executive creative director André Toledo tells Muse. "For many years, Libero's end-line and main concept has been 'If they explain it to you with football, you get it.' So, that's exactly what we did—explain that staying at home is better, with football."

Libero has released the first 10 issues of the magazine online for free, with exclusive interviews with Vicente Del Bosque, Jorge Valdano, Juan Mata and other football celebrities. "Each magazine has more than 100 pages with in-depth reporting on football, but also culture, art and more," Toledo says.

The initiative helps the Spanish maintain some semblance of normal life in one of the nations hardest hit by COVID-19. It mirrors Nike's offer of free access to the company's Training Club app, which gives users more workout options at home. In similar gestures, late-night hosts Trevor Noah and David Spade are reaching out to fans with social content while their TV shows are on hold.

In a broader sense, such efforts remind us that life as we knew it hasn't completely vanished, and should return once the pandemic subsides.

"It's not a gimmick, it's not a 'clever' visual, it's not just words," says Saulo Rocha, also an agency ECD. "It's a brand doing something for real to help people—something 100 percent related to what Libero does: entertaining people."

The ads use graphic elements familiar to football fans.

"The color palette, patterns, typographies and numbers are the ones found on the back of football shirts, and we used them to express the stats of each team or player," Rocha says. The work also subtly incorporates "house blueprints that resemble the lines of a football pitch, to reinforce the idea that it's time to stay home," he says.