Prime Video Spells Out a Powerful Message for Girls With 30,000 Baseballs

Activation hypes new series A League of Their Own

Last week, Amazon's Prime Video fused medium and message on a playing field in Southern California, using 30,000 baseballs to write a letter of empowerment for female athletes and promote the new series A League of Their Own.

That show, based on the beloved 1992 film about women's professional baseball during the World War II era, drops tomorrow. To celebrate its premiere, Prime Video hosted a game featuring competitors from various sports at Los Angeles Valley College's Monarch Stadium.

Maybelle Blair, 95, who played in the All-American Girls Professional Baseball League during the 1940s—and inspired A League of Their Own—tossed out the first pitch to series star and co-creator Abbi Jacobson.

On another diamond at the facility, Amazon offered these powerful words via skillfully placed spheres of rubber, cork and horsehide: 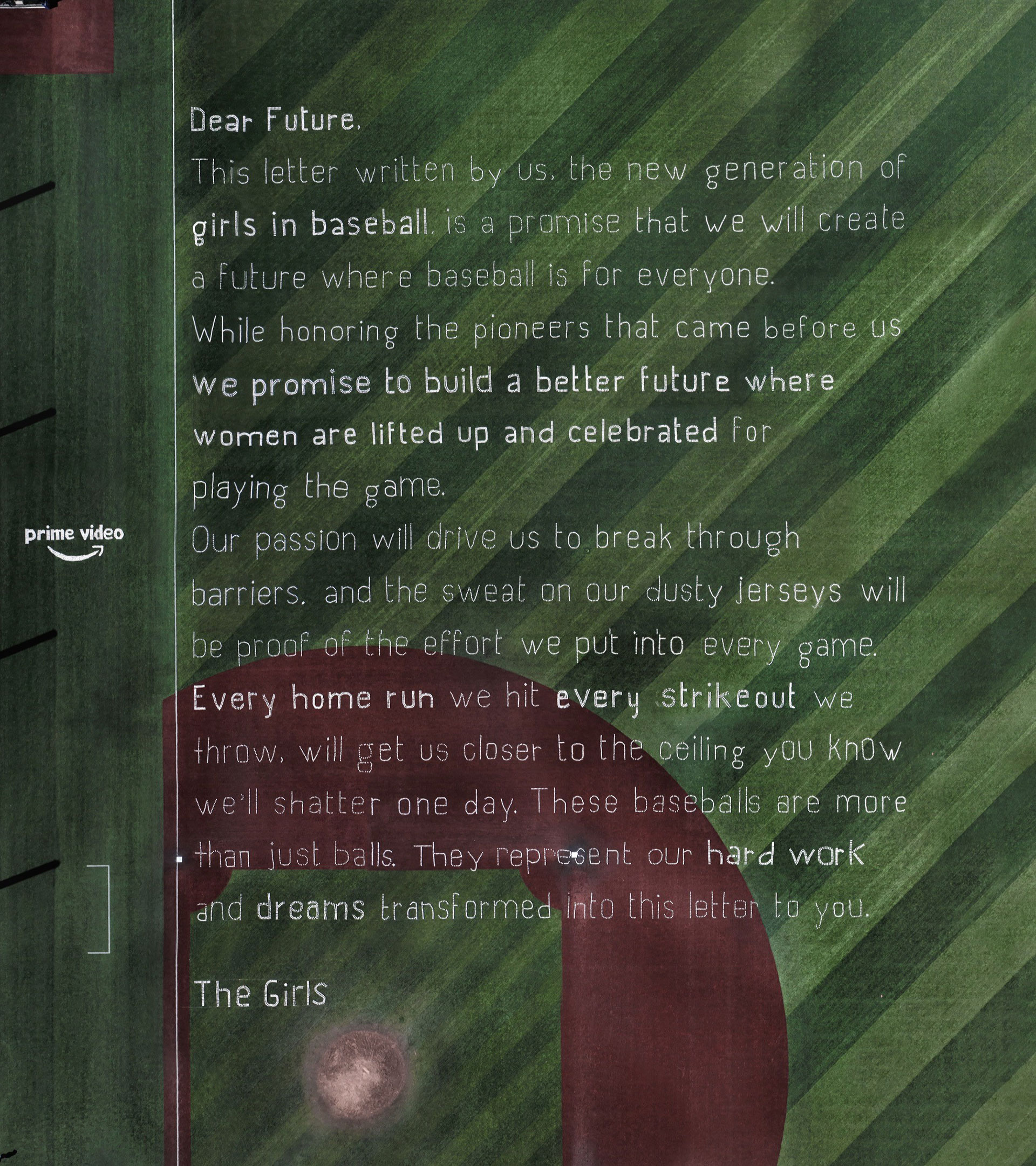 This trailer, created by the Newhouse Agency, celebrates the event, with Blaire getting into the swing of things:

Amazon says hyping A League of Their Own provided a prime opportunity to make a point about gender equality in sports, noting that baseball isn't just for boys, with research showing more than 100,000 girls ages 6-12 play the game in America today.

"While brainstorming and thinking about the 1940s, the era of A League of their Own, we realized that a lot has changed for women," Jazmine Chase, influencer marketing manager at Prime Video and Amazon Studios, tells Muse. "But when you think of the world of sports, specifically baseball, not much has changed. There aren't any women playing in major leagues—and just recently, the women's soccer teams won their fight for equal pay. So, we wanted to bring together all of the athletes who are doing the work in their respective sports, breaking barriers and making a better future for the generations to come."

These women, among others, took part in the game:

The letter was created in partnership with Baseball for All. The nonprofit creates opportunities for girls to play, coach and lead in the sport, and consulted on A League of Their Own. After the event, Amazon donated the balls to Baseball for All, the San Diego Waves, Culver City Little League and other organizations.

Chase adds: "Representation is so important, and you have to see in order to be. This letter and our inspiring new series, A League of their Own, provides hope and inspiration for a better tomorrow."

With Title IX celebrating its 50th anniversary of reshaping the sports landscape for women and girls, fostering equality on and off the field of play has become a hot topic for brands. We've seen notable efforts from AT&T, Buick, Degree, ESPN, Michelob Ultra and many more.