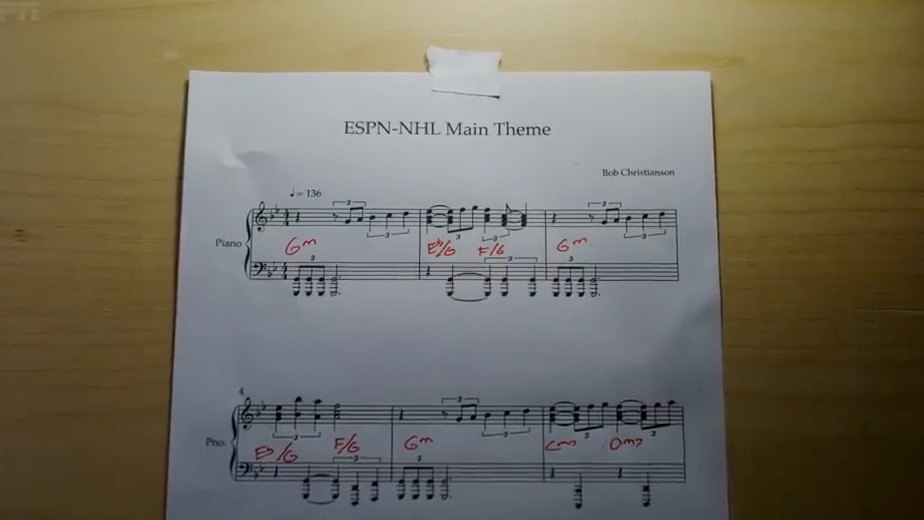 "It was genius in G minor."

That's Justin Bieber's assessment of ESPN's iconic NHL theme song as he narrates a mini-doc focusing on Bob Christianson, who wrote the tune 29 years ago. The six-minute film aired on the network before Tuesday night's contest between the Tampa Bay Lightning and Pittsburgh Penguins.

Through a new rights deal between the league and Disney, NHL games have returned to ESPN after a 17-year absence. The track is back, too, and its thrumming cellos, swirling violins and insistent percussion will punctuate telecasts for the foreseeable future.

In the film, Christianson recounts how he forged a piece of music that became synonymous with pro hockey and beloved by a generation of fans—Canadian-born Bieber included.

"Composing is being able to sit quiet enough so that you're able to listen," says Christianson, who has written numerous scores for TV and film. "That's how I get all my ideas—I listen."

He did just that in 1992, refining the melody at his piano until he hit upon the perfect sequence of sounds, then toiling in the studio to craft a sweeping symphonic experience.

"You just keep working at it," he says. "If you can't get it, you keep doing it again and again. Finally, you get it."

Put another way: Practice makes perfect, there are no short-cuts, success is 90 percent perspiration, etc. That's true in both music and sports, and the film draws parallels between athletic and artistic achievement.

In a great sequence, NHL elites don the earphones for a listen.

Nathan Mackinnon: "It's getting me fired up!"

Philipp Grubauer: "Can you play it again?"

"Music transcends," says Bieber. "It has the power to transport a feeling. From once upon a time ... to today."

Dude's a puck fanatic, too. Biebs dedicated his recent "Hold On" single to the Toronto Maple Leafs, and icing out Jimmy Fallon during a 2020 Tonight Show appearance.

At the doc's conclusion, with an orchestra standing by, ESPN analyst Berry Melrose hands the baton to Christianson as Bieber concludes, "When a moment has found a match, it's impossible to hear anything else."

Below, Mike Farrell and John Minton III, who wrote, produced and directed the film, discuss the project in detail:

"Justin read the script twice for us, so we had different energy, pace and inflections to choose from, which was very helpful. It was an extremely smooth process. He was enthusiastic about growing the game of hockey, a game he loves, which is why he agreed to narrate this piece."

A man and his music.

"Bob has written dozens of sports themes for ESPN and other networks—he also wrote the iconic NCAA on CBS theme that's used for March Madness. It was rewarding to give him this moment in the spotlight, as he has composed and produced all this incredible music over the years while remaining mostly anonymous."

"We filmed with Bob over two days at his NYC brownstone studio in the middle of September, and the orchestra shoot happened on Oct. 7, so it was a bit of a sprint to the finish after that shoot was completed."

Strike up the brand.

"We had three cameras during the orchestra shoot, filmed at LeFrak Concert Hall at the Aaron Copeland School of Music at Queen's College. It was a full symphony orchestra with 55 musicians on stage. We wanted the camera movements to be sweeping, energetic and fast, to compliment the power of the music itself."