How Budweiser Is Winning Big Around Cultural Moments in Sports

On March 27, at a nearly empty American Airlines Arena in Miami, Dwyane Wade was overcome with emotion in one of the most intense sports-related events of the year.

No championship was on the line. Wade, nearing the end of his storied 16-year NBA career, wasn't even playing in a game.

Instead, he was shooting a commercial for Budweiser—an ad that would pay tribute to his accomplishments on and off the court. During the season, Wade had made a habit of swapping jerseys with fellow superstars he admired, such as LeBron James. Now, as the cameras rolled, five everyday people took turns thanking Wade for the special role he played in shaping their lives. They gave him tokens of their heartfelt appreciation.

Feelings ran high as the night unfurled, then shot through the backboard in explosive fashion as Wade's mother Jolinda walked up to her son. She spoke of the unconditional love and support he had offered after her release from prison, and an exceptionally generous gesture that turned her life around. Wade bought her a church, where she now serves as pastor. To say thank you, she presented him with one of her ministry robes.

Budweiser | This Bud’s For 3 | Dwyane Wade

"Probably his expectation was that we would surprise him with some legendary players from the past and do the jersey swap," says Ricardo Marques, group vp of marketing, core and value brands, at Anheuser-Busch InBev. "He was very touched. This is something we believe that 10 years, 15 years down the road, he's going to watch again, and it will be a reminder of his amazing accomplishments."

The resulting four-minute spot, "This Bud's for 3" (a reference to Wade's jersey number), created by VaynerMedia, generated nearly 5 million views on YouTube alone, along with worldwide media coverage. It's one of the buzziest sports ads of 2019 so far.

His approach to making great sports-themed campaigns is pretty straightforward. Such work, he says, "needs to carry the point of view of the brand" and articulate the company's core values. "As obvious as it might seem, that's sometimes forgotten or relegated to a second priority," he says. "Connecting with a cultural moment is, of course, very important, because then you're tapping into a conversation that already is relevant for your audience." 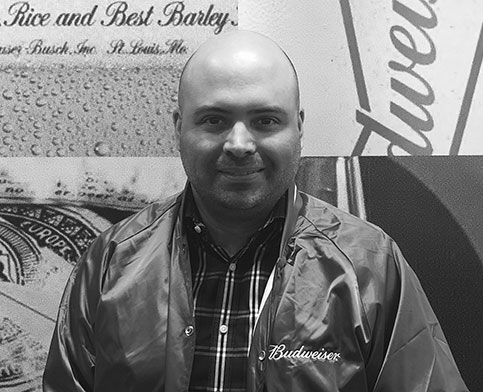 In the following conversation, edited for length and clarity, Marques—who is also a member of the Brand Jury for the 2019 Clio Awards—expands on his ongoing effort to "use the magic of creativity to connect the point of view of the brand and the cultural moment in a way that the audience can appreciate, share and talk about."

Muse: The Dwyane Wade spot was amazing. What's the story behind that ad?

Ricardo Marques: We have a newsroom team here at the office. So we scout every day what's going on in the world, especially at passion points like sports and the NBA, and we correlate it closely with our brand. We anticipated [Wade's farewell] would be a big story. And that's when we got to work.

From idea to final product, it took four weeks, so it was relatively fast for the type of production involved. We observed that throughout the season he was swapping jerseys with people that he respected. Secondly, we realized that he not only is a legendary NBA player, but an amazing human being. His accomplishments off the court probably didn't get as much attention as what he did on the court.

So those were the ingredients of the idea, and we sorted through multiple different routes, but ultimately landed on this idea to surprise him with people that he has helped throughout his career.

When his mom came out, did he keep it together?

No, we had to stop for a few minutes. I mean, he was shocked. We had to stop because he asked for a break. It was a very special moment for him and for everybody involved.

Did the Budweiser brand get a big boost?

We had 10 minutes on CNN, and the anchor, Brooke [Baldwin], she—at a time when the news talks about hate and everything that's wrong with the world—said [something like], "Let me now show you something that should remind you of all the good that's still out there." In a time where engaging and cutting through has probably never been harder, because there's so much going on, you need to be part of the news cycle, part of culture, and part of something that people want to engage with.

Talk about the Jackie Robinson ad, which Spike Lee directed.

When we realized that the 100th anniversary of Jackie Robinson was around the corner, we decided that we wanted to mark that moment. The first question we asked was, "What's the best way to honor his legacy?" And two, "Who are the people that would be safe to partner with?"

The two names that came immediately to the table were [Jackie's daughter] Sharon Robinson, and from a storytelling standpoint, Spike Lee. We were very pleased not only with the story that we were able to put out, but also because we could [provide funds to] help realize a dream of the Robinson family, which was to open the Jackie Robinson Museum here in New York. At the end of that piece, we also involved present-day Jackie Robinsons—amazing people who are changing the world.

Are there other recent campaigns you're especially proud of?

One that we put out last year around the Las Vegas Golden Knights was an incredible story. [It recently won a Gold Clio in Clio Sports.] After what happened, the tragic night in Las Vegas [Oct. 1, 2017, when a gunman killed 58 people at a downtown music festival], the city was looking to move forward. Vegas doesn't really have a tradition with hockey, but the team was able to pull together and against all odds [500-to-1, to be exact] get to the Stanley Cup Final in its first season. They lost to the Washington Capitals. But the story of resilience—it was very inspiring for us. We closed that ad by saying, "This was about more than raising a trophy. This was always about lifting a city."

The Vegas Golden Knights’ first season ever was always about more than raising a trophy.

Do you ever get nervous about leveraging a cultural moment? I'm thinking of the immigration ad about August Busch on the Super Bowl in 2017.

On that particular campaign, we'd been working [on the spot] for four months. We [initially] launched it just before the Super Bowl. And then what happened? There was an immigration ban [put forth by the Trump Administration]. At this point, we could have said, "Since some people are probably disagreeing with this, or looking at it a different way, we can pull it off the air." But we did not pull it. Because it was authentic to the story of our brand. This is our founder. It's not a brand trying to jump on the bandwagon of a political subject just to get publicity.

At the heart of it, the the inspiration was never "Let's talk about immigration." The inspiration was, "In a brand such as Budweiser, a 140-year-old brand, what are the stories that have not been told?" Craft beers have an owner and a founder [who are often well known to the public, so] they feel very human—and we feel like a corporation. People forget that behind Budweiser there was one man with a dream who came to this country to realize his dream. It was an attempt to put a face on a brand that was seen as a corporation more than a brewery.

Why talk about wind power in this year's Super Bowl ad, using a Bob Dylan song?

We made the decision that we are going to power our breweries with renewable energy. By the way, our wind farms are right here in the U.S., in Oklahoma. So we said, "You know what? This is such a relevant issue right now. We have something to say about it. Not just something that is a loose claim, but something that is about how we brew our beer." So then the question was, how can we deliver this in the most powerful way—simple, yet powerful? And "Blowing in the Wind" was a perfect match.

You've been at A-B for 13 years. What changes have you see over that stretch in terms of sports marketing?

We moved from being obsessed about the signage aspect [in the arenas], and the TV aspect … to more of a partnership with our teams. [We're] looking to bring more experiences to our consumers, to act locally instead of having a one-size-fits-all national approach to sports.

What's a recent experiential campaign you're proud of?

We have a platform called Budweiser Live. I remember an epic one [last year at an open-air venue] in L.A. We had an exhibition game of basketball. We had Shaquille O'Neal host for the night. We had a partnership with Levi's for customizing jackets with Budweiser vintage designs. We had a partnership with a guy who was customizing shoes. Then we had music [by Big Boi and Ty Dolla $ign], and it was an amazing experience of not only the game of basketball but the culture around the game. That's the kind of stuff I'm sure people that were there will never forget. That's something they will remember for the rest of their lives.

What's your favorite sports ad of all time?

I would have to say—OK, I'm giving my age—but Spike and Mike [Spike Lee and Michael Jordan's iconic late-'80s/early-'90s spots for Nike].

Is there anything on right now, something you're not involved in, that you think really stands out?

I have been very interested in what Adidas has been doing around sports … bringing more of a lifestyle angle to their brand. And it's going back to their roots, back to Run-DMC and when the brand was super, super cool and connected with culture. It's very interesting to see how they are bringing back some of that magic.

Any sports ads you think are just absolutely abominable?

The important point is: If it forgettable, that's even worse. That's always the question we're asking ourselves: Is it forgettable? Are people going to talk about it? Does it add anything to anybody's life or to our brand?