Hayes Steinberg, co-owner and creative chief at The Mark in Toronto, spent months planning and producing a 90-minute brand film about Canadian hockey for Scotiabank. Dubbed Hockey 24: A Film by Canada, the project focuses on a single day—Nov. 17, 2019—in which the bank sponsored events at community rinks nationwide.

Developing a long-form, deep-dive documentary about hockey felt right given the client's high profile in the sport. Its name graces venues including the Scotiabank Arena, home of the NHL's Toronto Maple Leafs, and the Scotiabank Saddledome, where the NHL's Calgary Flames play. The bank also sponsors numerous kids' teams and programs, backing initiatives such as Girls HockeyFests, the LGBTQ-focused You Can Play, and Rogers Hometown Hockey, to name a few.

"Most brands in Canada want to attach themselves to hockey. Few brands do it in as meaningful a way as Scotia does," Steinberg tells Muse. "They know the sport and its power better than most. We needed to demonstrate this understanding in a deeper way. We needed to get into every nook and cranny of our country and the sport. A demonstration of this in 30-second pieces felt like a missed opportunity."

Steinberg's team put out a coast-to-coast call for user-generated videos, receiving thousands of submissions, some lasting several hours. At the same time, "we hired journalists to find authentic, never-before-told hockey stories with as much representation as possible—geographic, cultural, racial, gender, new to Canada, people with disabilities, etc.," he says. "We also needed to represent the values that our client considers core to their sponsorship strategy: inclusion, teamwork, hard work and passion. Once we found these stories, we matched them with award-winning Canadian documentary filmmakers and crews."

On that day in November, 25 such crews captured more than 100 hours of film. Weaving together this professional footage with user-generated clips, the agency produced a vibrant celebration of Canada's complex, passionate and multifaceted relationship with hockey.

The trailer below reflects the film's style, stripping away surface layers to reveal insights about diverse players and the true meaning of the sport on and off the ice.

According to Hockey Canada, the nation boasts 750,000 registered players in one league or another, plus thousands more who hit the ice on frozen ponds and neighborhood rinks (plus icy backyard, roads and driveways). Focusing on a range of such activities over 24 hours allows the film to present a compelling selection of tales without the proceedings losing focus.

We encounter plenty of kids, but also teens, young adults and even a league of grannies. Folks overcome the odds to compete, even when they're legally blind, and a transgender player credits hockey. And be on the lookout for an adorable potbelly pig who delivers the bacon as a pond-rink mascot.

"These stories don't exist without hockey, but it's the deep connection we all feel to them because of how universal they are," Steinberg says.

Hockey 24 debuted last weekend on Sportsnet, and now streams for free at Hotdocs.ca. Its premiere was originally planned for early May, at the Hot Docs Film Festival, timed to the NHL's Stanley Cup Playoffs. (Owing to safety concerns around Covid-19, the festival moved online and pro hockey has postponed its postseason.)

Filling the sports vacuum, the film ranks as a prime example of the recent trend toward brand-funded features, on a par with efforts from HP and others in terms of scope and impact. All in all, Hockey 24 boasts all the right feels, conveying the power of sports to transcend shots, scores and statistics as it enriches and reflects our shared humanity. Scotiabank, its on-screen presence mostly muted, skates off a winner.

Below, Sternberg discusses the game plan he used to make the film and explains how such penetrating content can help brands break away from the pack. 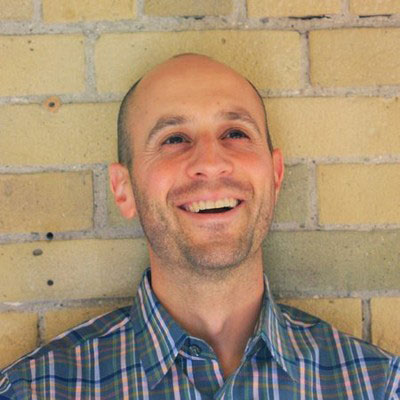 Muse: Was the film always designed to follow "24 hours in the life of hockey," or did that approach evolve?

Hayes Steinberg: 24 hours was a core part of the original concept. To really demonstrate the connection Canadians have through hockey, we wanted our film's narrative to be "eyes open to eyes closed." At first, there was some anxiety around what we could reasonably accomplish and capture in one 24-hour period. But this was essential to the audience connection. We wanted the film to double as a "time capsule," a day in the life of hockey-engaged Canadians from coast to coast to coast. We knew there would be more of a wow factor if we could pull it off on one day.

We chose this date specifically for a few reasons:

Scotia is heavily involved in hockey in communities across Canada, and this day happened to have a number of Scotia community hockey events already planned (Scotia Girls HockeyFest, Rogers Hometown Hockey, and a special event at the Hockey Hall of Fame).

NHL alumni (Darcy Tucker and Lanny McDonald) and Olympic medalists (Cassie Campbell-Pascall, Natalie Spooner and Jayna Hefford) were all involved in hockey events that day, and they were interested in being part of the film.

Canadian weather would provide us with a great range of visual options in November: shorts and T-shirts in Vancouver, B.C., frozen ponds in Banff, Alberta, and polar bears on big ice drifts in Churchill, Manitoba.

We'd have just enough post-production time to premiere the film around the 2020 NHL playoffs.

How'd you gear up for making the film?

To promote participation, we created broadcast and digital ads. With emotive music and Ron MacLean's narration (he's known as the voice of hockey in Canada), the ads got on the radars that we needed to be on. We also created a branded submission portal so Canadians could easily upload their footage.

And you also had journalists research stuff—plus Scotiabank has a slate of Nov. 17 events. Did you wind up with a daunting among of stories to choose from?

We narrowed down the stories to about 50, and had our directors reach out to them for informal "screen tests." That helped us get to our final number of 25 to film. Our three-hour pre-production call with 25 crews from all across Canada ensured a consistent tone of voice, shooting style and content requirements.

Between the film crews and UGC, you got hundreds of hours of raw footage, yes?

It took eight of our staff six full weeks, reviewing and categorizing, full-time, to get through it all. 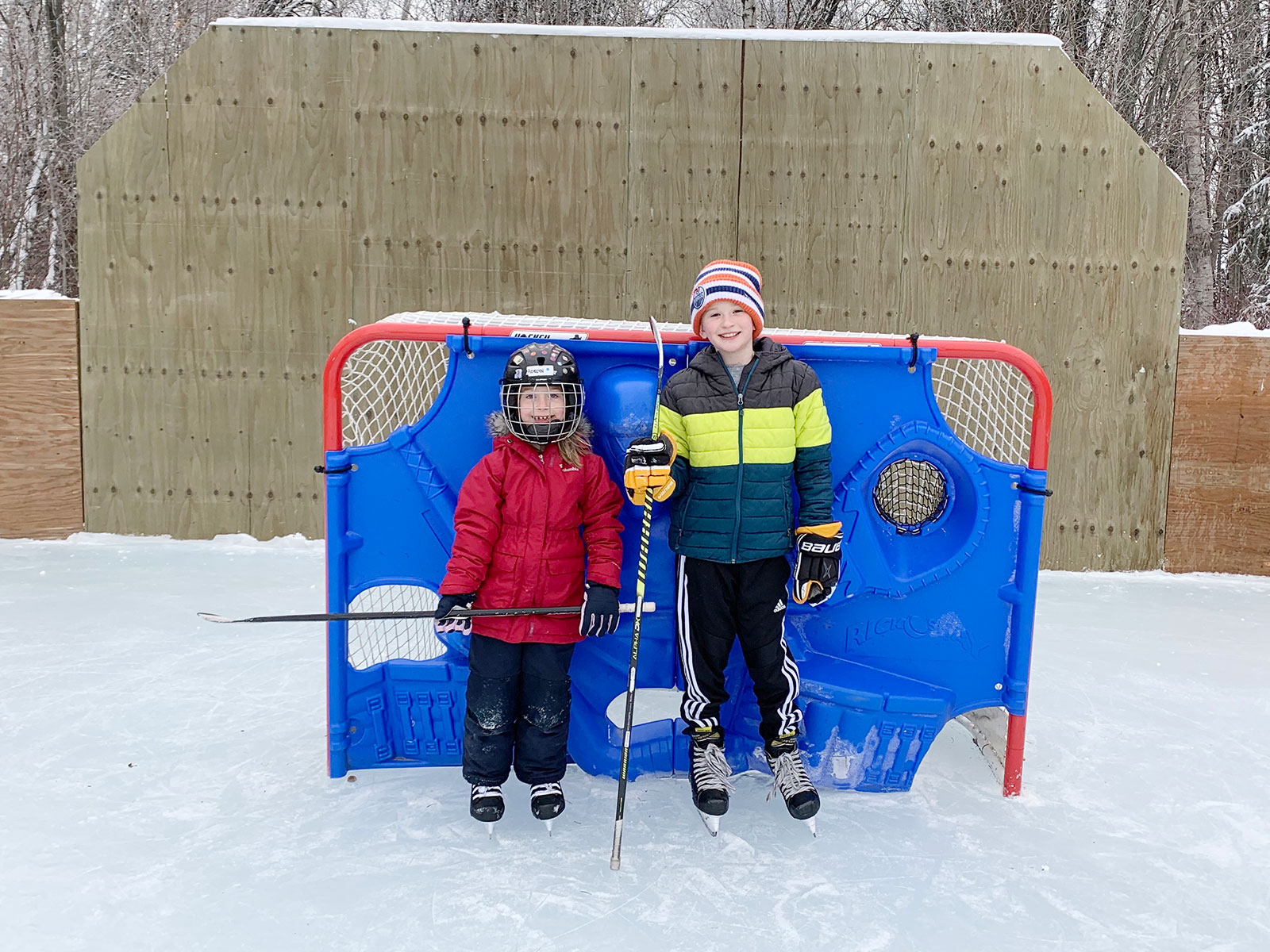 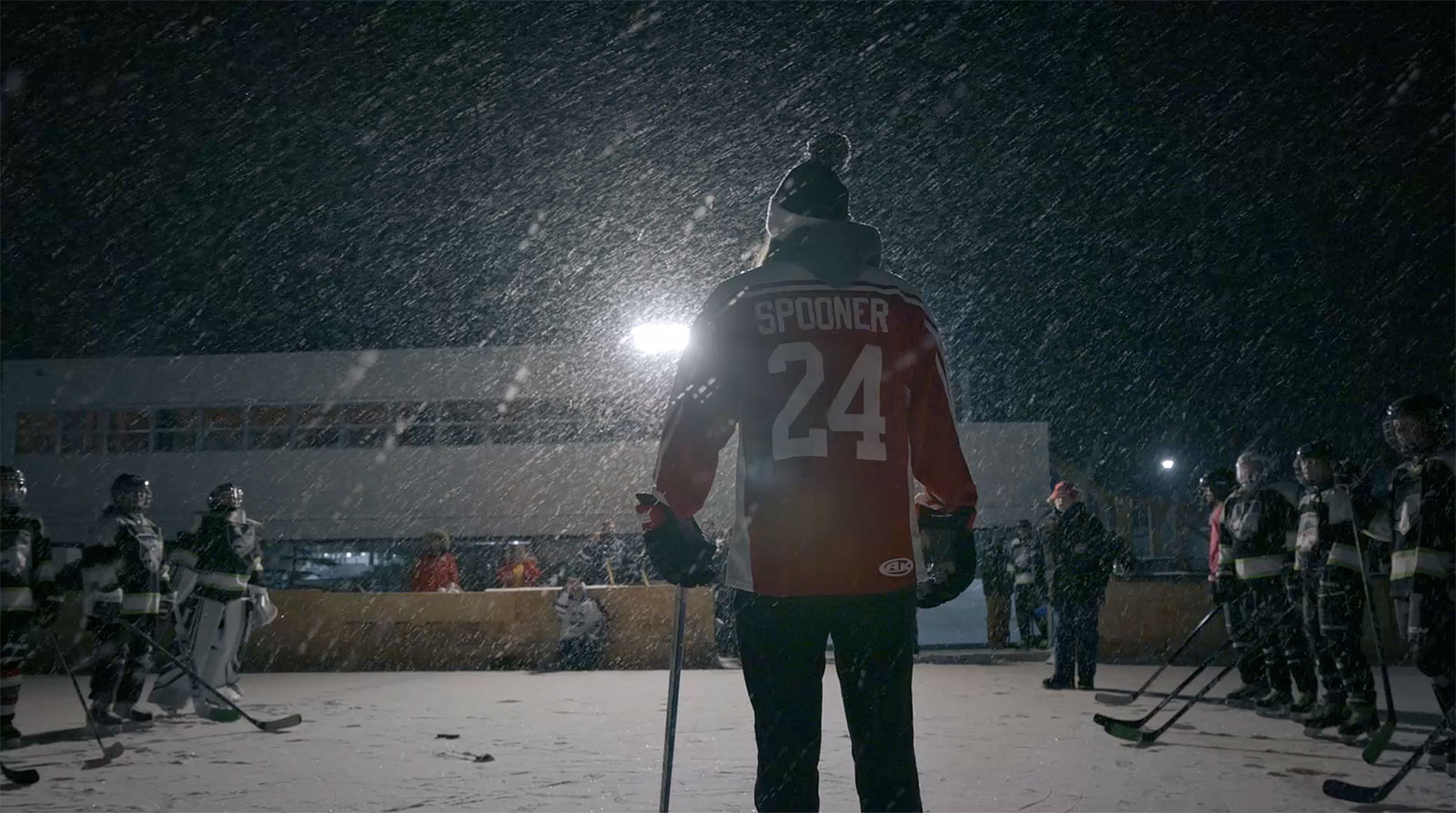 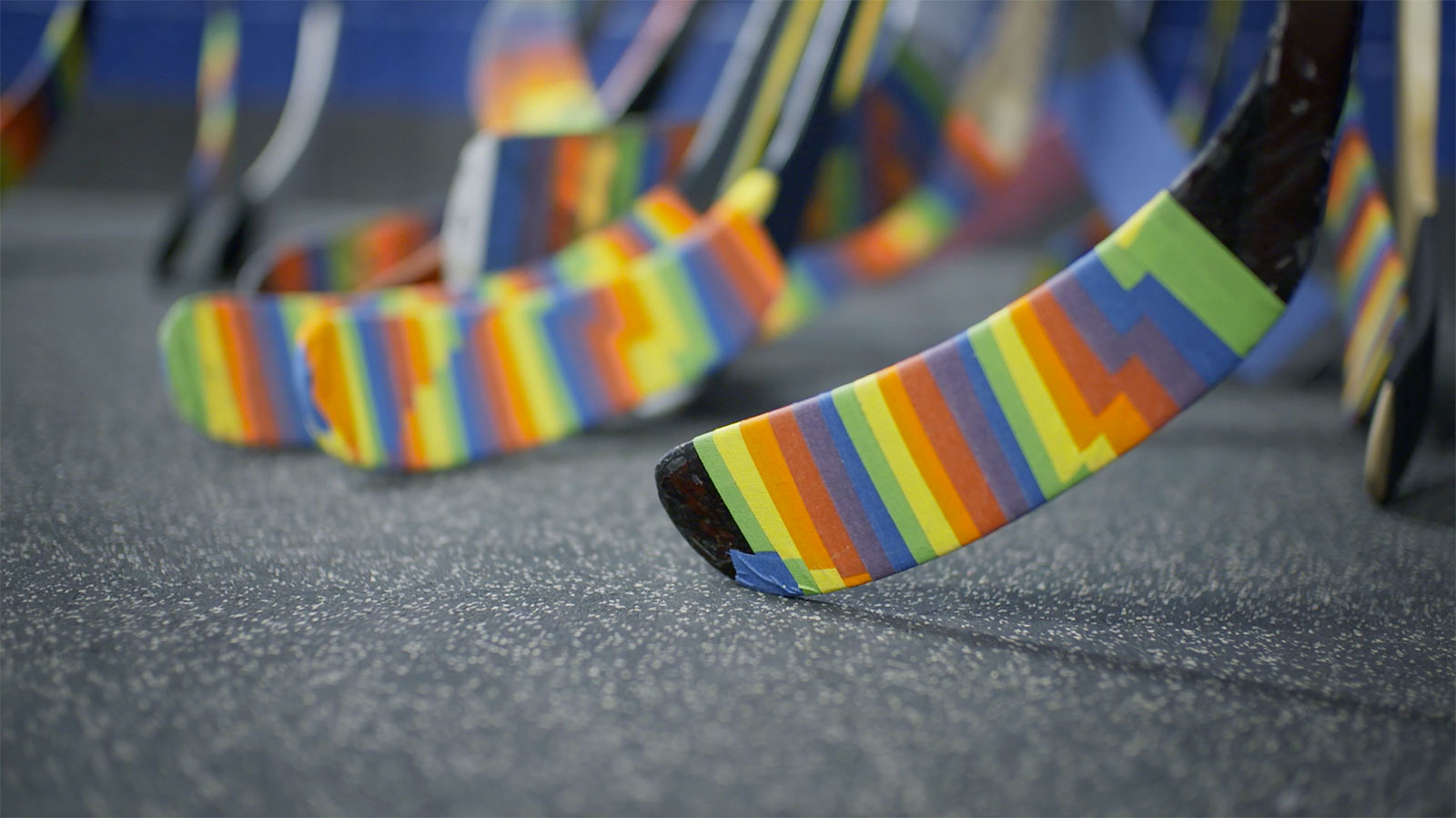 Where'd you go from there?

The walls of our war room were covered in Post-it notes with story names and montage ideas so The Mark's editor (who had never done anything like this before), our senior creative team, and our director of production could shape the narrative. The challenge was to make professional doc footage fit with amateur filmmaker footage, as well as maintain the story, all while keeping a close eye on the authentic delivery of Scotia's brand throughout. After three months of editing, we began sharing rough and fine cuts with our Scotia clients for their feedback and legal approval. Film coloring, sound mixing, original music are all standard parts of pre-production. But in this case, they had to be relied on to bind footage from many different sources, leaving the viewers feeling like they watched a cohesive narrative.

Any unexpected challenges or headaches?

In the week leading up to Nov. 17, one of our "stories" decided they didn't want to take part. We respected it. But we had to replace that story in somewhat of a panic. I won't tell you which one, but the replacement ended up being one of my favorites.

Which stories really stand out for you?

Darian Louie and his grandma, Ann, are Indigenous Canadians who live on the Williams Lake Indian Reserve. Darian's family has been plagued by mental health, addiction and abuse issues. His grandma's love and commitment has helped keep Darian on a positive path. Hockey has helped, too. And now, through his hard work and natural talent, Darian is being scouted for higher levels of hockey.

The Cey family from Wilkie, Saskatchewan. Bill Cey and his late wife had 18 kids. Those kids have many kids. This immediate family includes over 80 people! Every year, they get together for a family-only hockey tournament. Last year, it happened to take place on Nov. 17.

Nicole Durand from Eastern Passage, Nova Scotia, is wheelchair bound. She grew up watching her able-bodied brother play hockey. When she decided she wanted to play, she not only found her way onto a team playing on a "sledge," but she actually created an entire sledge-hockey league. On Nov. 17, she played a sledge hockey game with her team which includes her able-bodied dad as the coach. This woman is not famous. But she should be.

The emotional power of Ainslie Bien-Aimé's story. His parents escaped Haiti to give him a better life in Quebec. But in a Cool Runnings kind of Hollywood story, he overcame racial challenges and led Team Haiti to the 2015 World Street & Ball Hockey Championship. When he tells the story of meeting his father at the airport after the victory … my eyes well up each time. The desire to make your parents proud and to give them back whatever you can for everything that they've done for you. Hugely powerful.

What's the brand boost for Scotiabank?

Canadians widely recognize Scotia as a big supporter of the thing we all love most: hockey. It's through awareness of this shared passion that Scotiabank sees lifts in key brand metrics like willingness to consider and recommend. Hockey 24 further ingrains Scotia as a key supporter of hockey in Canada, but it does so in such an authentic way that it deepens the connection with its audience. 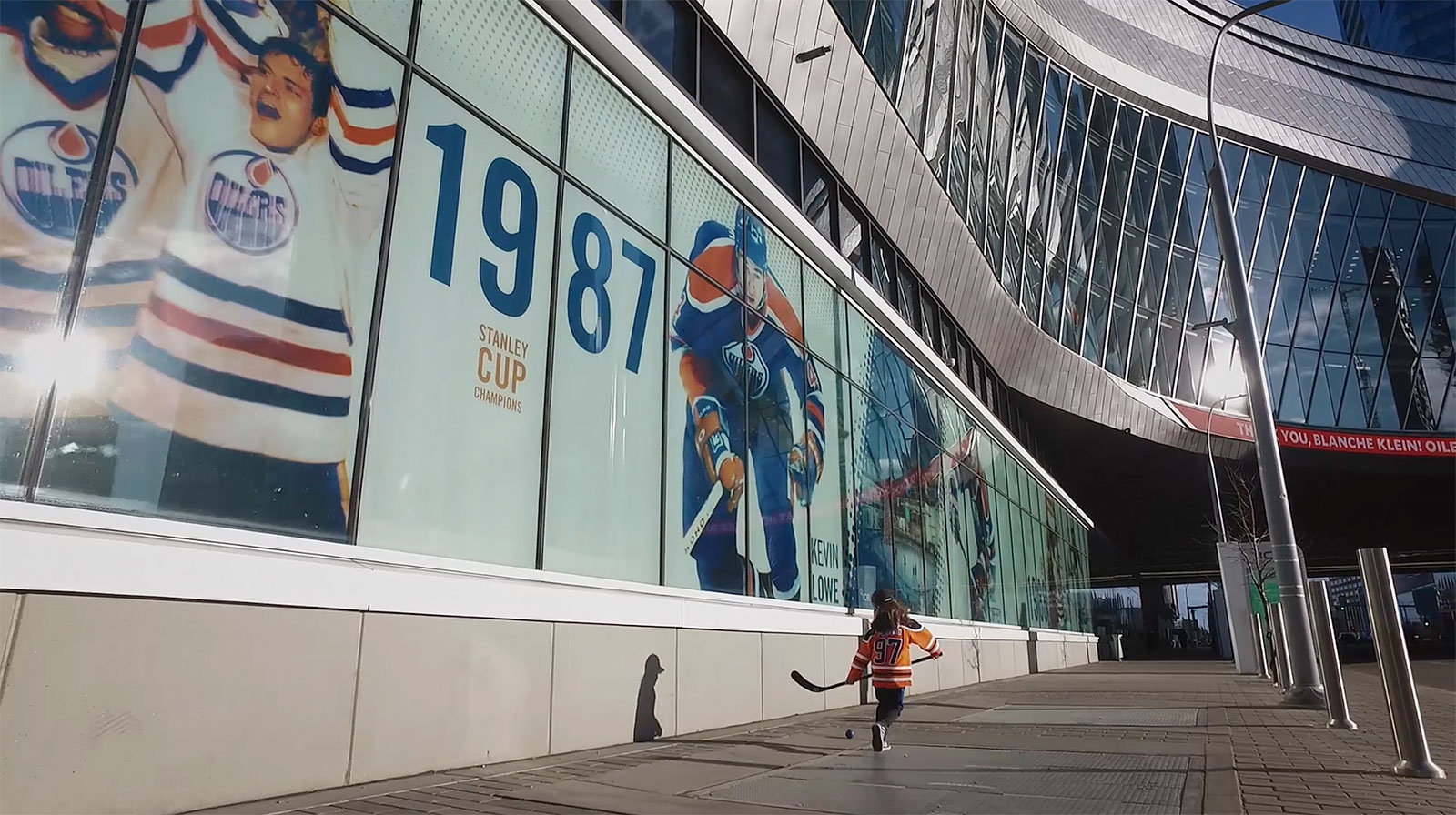 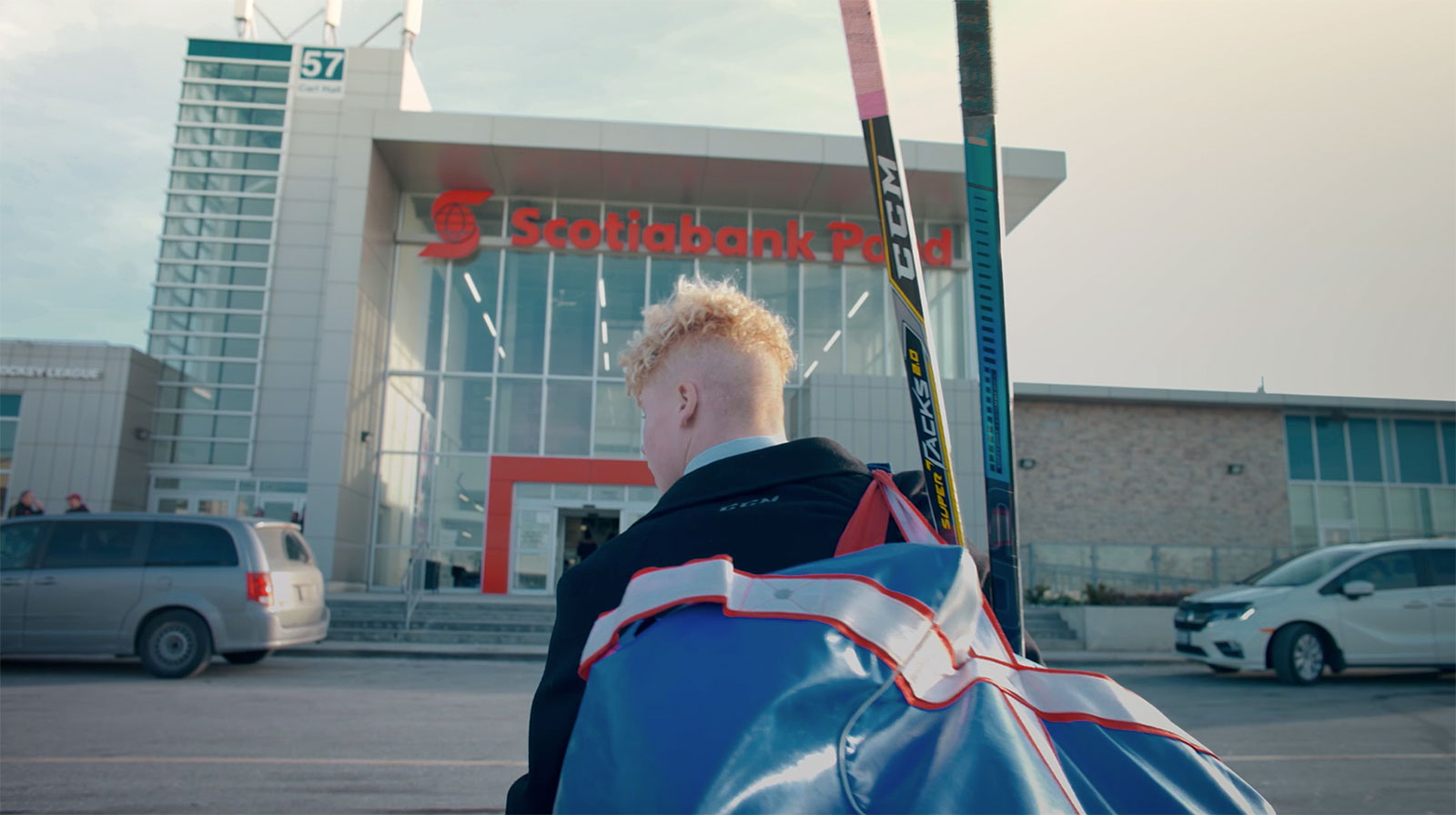 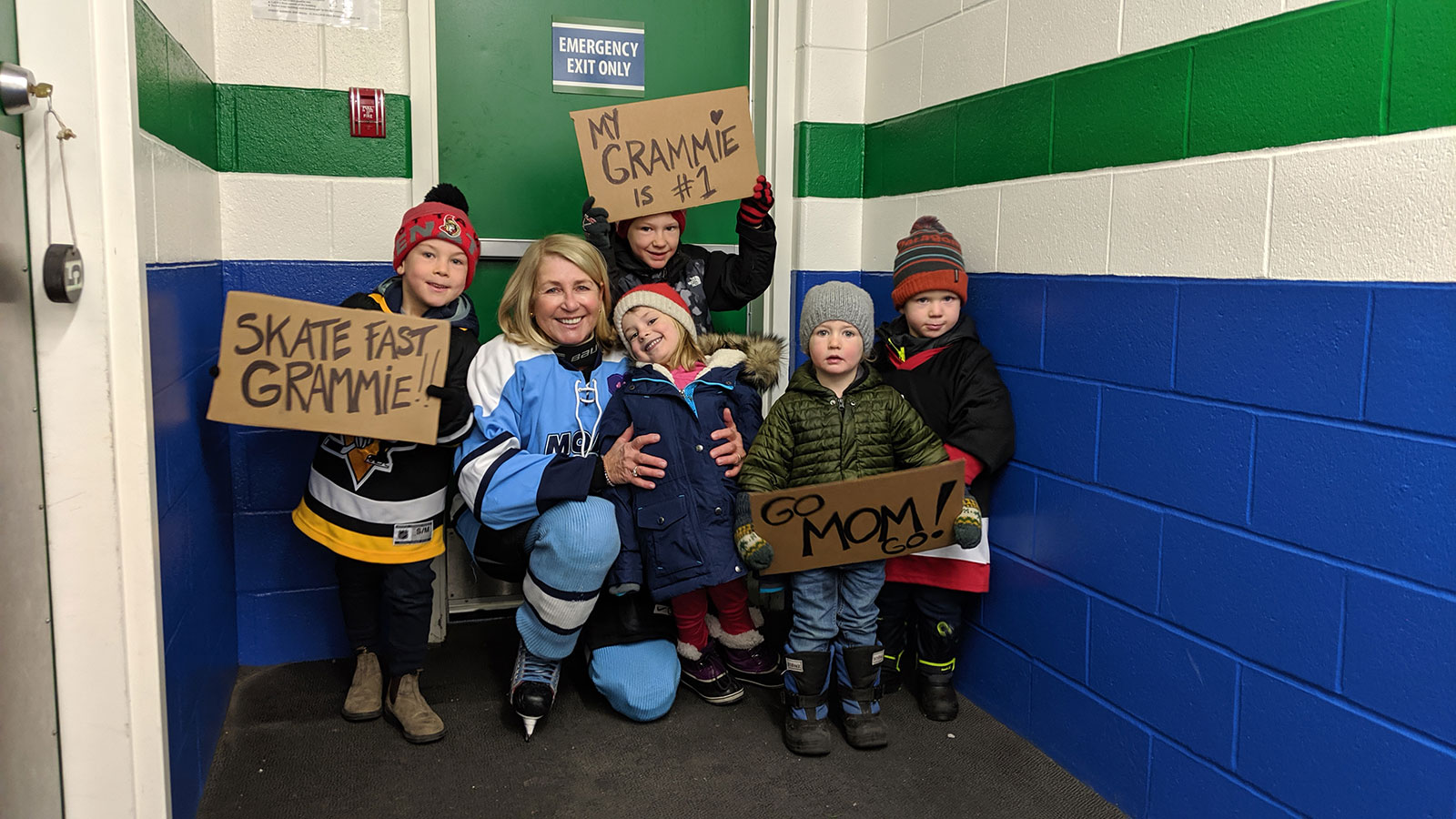 Can you frame the film in a Covid-19 context?

Covid-19 gave us a unique opportunity to really lean into what's meaningful about this film and its audience: Hockey binds Canadians. And with all of Canada social distancing, we were craving things that bind us. We were also craving hockey. Much like The Last Dance gave basketball fans a meaty dose of the content they were craving, Hockey 24 did the same for Canadians. It reminded us of how, through hockey, we connect, we learn to be selfless, we learn hard work, dedication, what true friendship means, and we learn to appreciate each other's differences.

What's your personal connection with the game?

My dad used to take me to see the Montreal Canadiens play in the old Montreal Forum. We built our relationship around this shared passion. I never played organized hockey, but I used to play with my dad, my uncle, and all my friends on our outdoor neighborhood rink until the lights were turned off or until frostbite began to set in, whichever. In Canada, even if you don't play hockey or have a kid that plays hockey, you somehow have a relationship with the sport and its benefits.