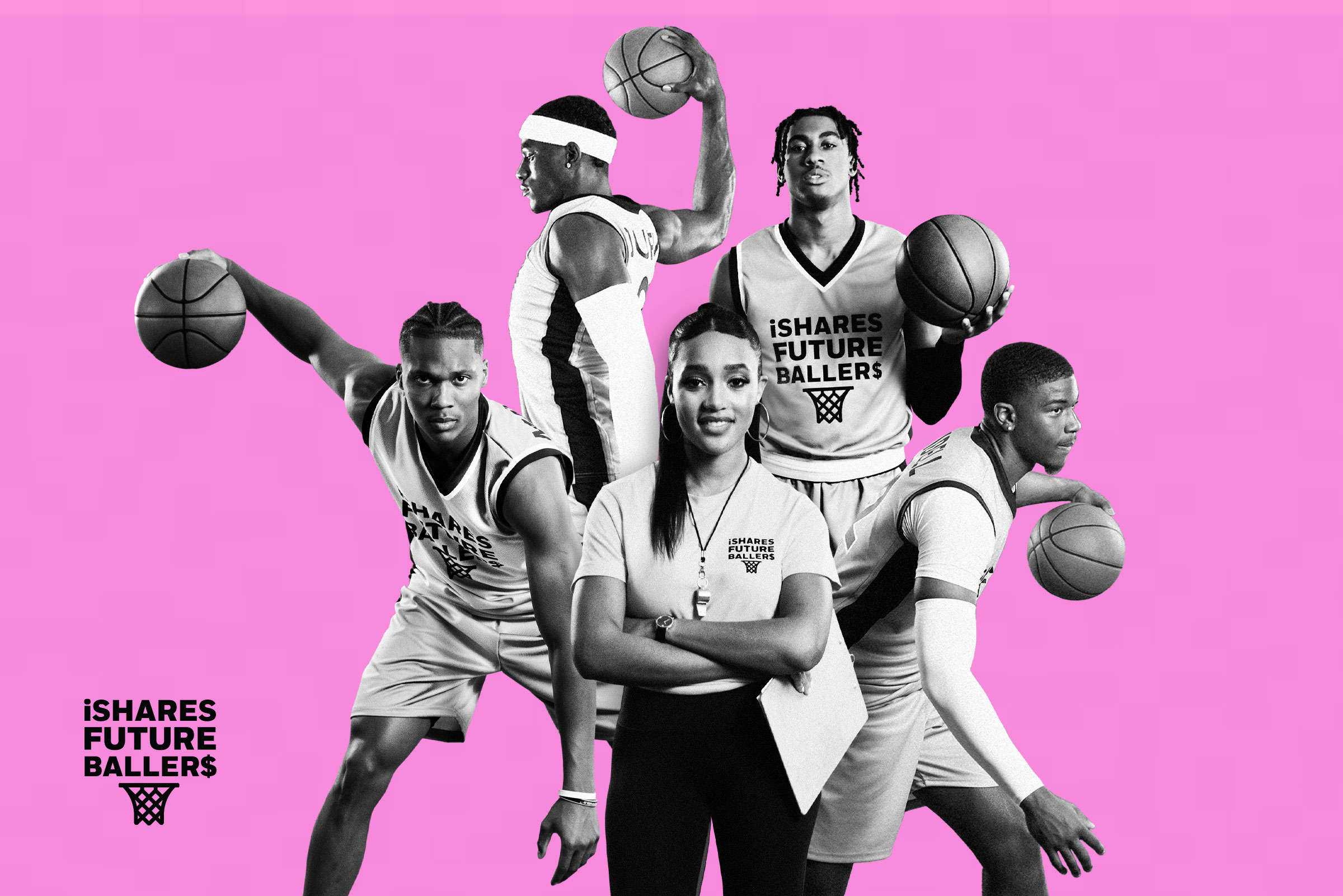 On the basketball court, NBA prospects would make most of us look ridiculous. But when it comes to stocks and bonds, they're just like everyone else. Such players often sign big-money deals, then drop the ball with investments. Heck, a promising power forward could lose his shirt—er, jersey—without some expert coaching.

So, BlackRock's iShares, a provider of access to exchange-traded funds, has joined with DDB San Francisco, Edelman and Mindshare to help up-and-coming hoopsters maximize their earnings over the long haul.

This week, iShares named its first "Future Baller$" team, consisting of college standouts Bennedict Mathurin, E.J. Liddell, Jaden Hardy, Jaden Ivey and Jalen Duren. Each agreed to invest some of their sponsorship cash through iShares, and they'll receive financial guidance from Lauren Simmons, one of the youngest-ever female traders on the New York Stock Exchange.

The Baller$ appear in this :60, discussing their past struggles and ambitions for the future:

"iShares' platform is all about untapping investor potential," Ben Wolan, executive creative director at DDB, tells Muse. "We searched for the ultimate expression of this and found that basketball rookies—who were about to come into more investor potential than ever before—were a great example. As young people with a sudden influx of capital, they're susceptible to finance fads and short-term investing pitfalls."

Simmons will coach the players on making smart money moves, with a range of long- and short-form content breaking across ESPN, Instagram, Yahoo Sports and other channels chronicling their progress.

"Lauren is more highly relatable to the new wave of retail investors than your average advisor," Wolan says. "She has an extremely charismatic personality and had great chemistry with the players. She demonstrated a genuine passion for helping drive their mission."

The Baller$ themselves "showed an interest in building their finances long-term by playing the long game through ETFs," says Eric Cruz, also an ECD at DDB. "It also didn't hurt that they're all in the top-20 performing rookies in the draft."

But these guys enjoy huge paydays coming once they sign with the NBA. Does that really jibe with the experience of everyday folks looking to boost their IRAs?

"Though they do make big bucks, our research showed they are likely to face the same financial difficulties that we all do," says Wolan. "They are just as tempted by quick volatile wins, and we want to help them, and retail investors, learn to avoid that."

The campaign arrives amid market churn, with a flood of new investors joining the game since the pandemic began. Per iShares, about 9 in 10 such folks regret some of their trading decisions, so the company believes the time is right for "Future Baller$."

Up next: hoop-themed "EFT Workout" videos on TikTok, plus partnerships with key creators. Twitch fits into the playbook, too, with influencers explaining sustainable strategies in an upcoming livestream. Also, a series of "Future Baller$ Rookie Camp" clips will drop on the platform in coming weeks.

"This is a fight against the short-term, volatile fin-fluencers who are currently dominating the platforms with sometimes quite dangerous advice," says Cruz. "The hope is to help young investors be more informed and prepare themselves for the future."