For much of the :60, created by AMV BBDO and Seven Stones, Rice appears fraught with anxiety, racing around the field of a packed stadium sans teammates, opponents or even a soccer ball. The camera pans across faces in the crowd, many of whom share Declan's expression of frustration and fear.

There's hope in the end, however, as a hand enters the frame to help Rice get off the ground. "You don't have to be alone to feel alone," the ad says. "Let's tackle it together."

Prettybird director Robert Wilkins delivers a succinct, powerful metaphor for loneliness, and the spot, which dropped in the U.K. last week, ranks as a worthy follow-up to last year's CALM effort with boxer Tyson Fury. If anything, the new film feels even more affecting. Soccer is a team game, after all, so Rice's intense isolation mirrors emotional disconnection and reminds us that no one can solve life's problems on their own.

The Fury PSA helped boost the public's awareness of CALM by 50 percent in the past year, the group says. Now, with 125 suicides per week in Britain, many of those driven by loneliness, the organization is encouraging more people to seek support. (In June, CALM specifically addressed suicide through an installation and ads showing the last photos of people who took their own lives.)

"Elite sportsmen and women can play an important role in changing perceptions about mental health," AMV BBDO strategy partner Joe Smith tell Muse. "By opening up about their own struggles, or encouraging others to get support, they can reduce the stigma around issues like loneliness or depression." 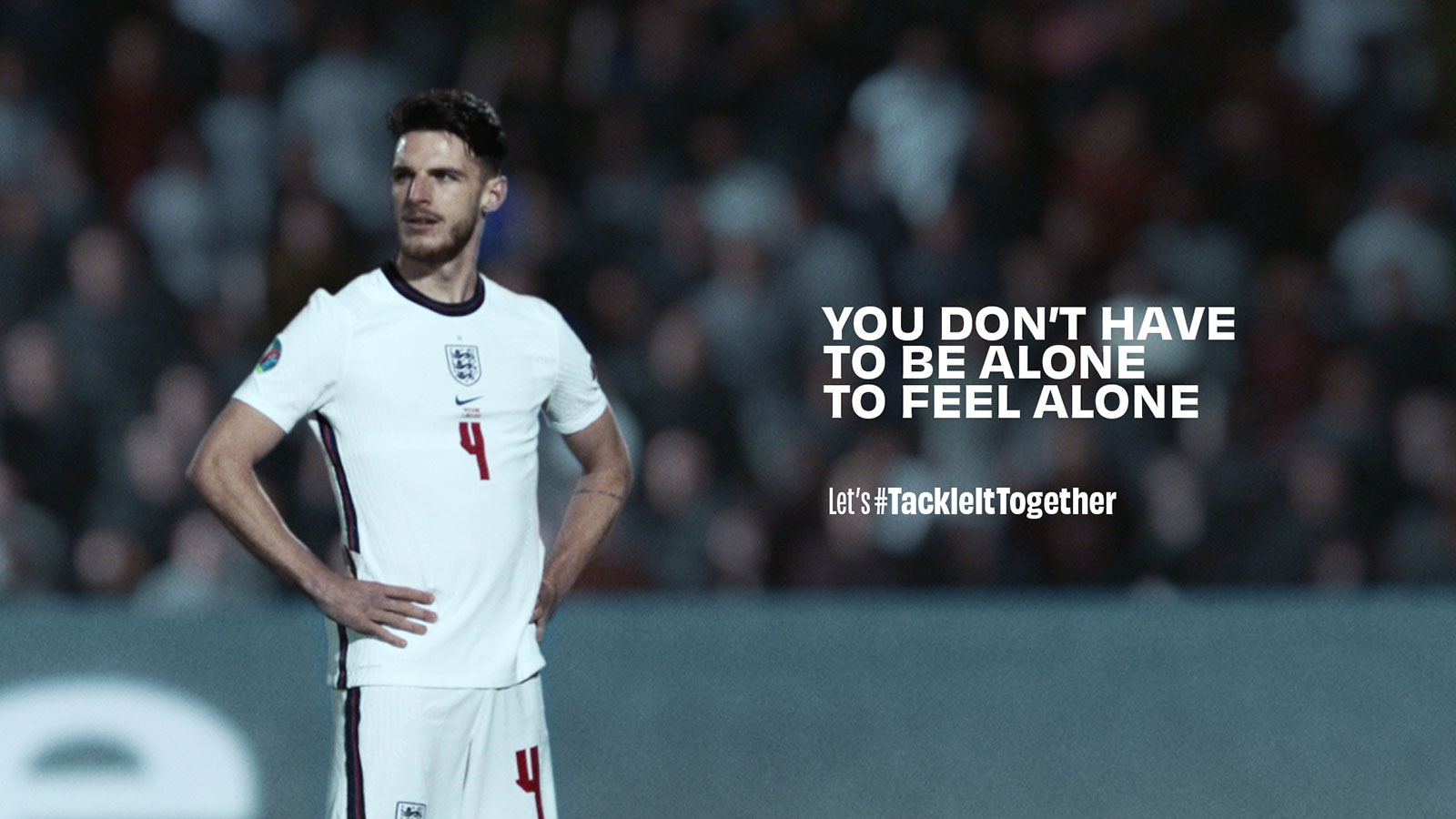 Though the campaign kicked off with boxing, "we had this football idea from the beginning," Smith says. "The 'Invisible Opponent' concept was always designed to work across different sports over time. Football gave us the opportunity to talk about loneliness specifically. Seeing one man alone on a football field, with 21 teammates and rivals removed, illustrates the insight that you can feel lonely even when surrounded by people."

The crew mixed new and existing footage to impressive effect, with much of the action gleaned from 2021's UEFA Euro tournament.

"We managed to get access to multiple cameras from the games which gave us unseen footage, and then frame by frame went about removing everyone in post-production," explains Seven Stones managing director Dan Russell. "To tell our story and go one bigger and better than our Tyson film, we also shot with Declan at a local stadium to make it feel more documented and epic—not your average game highlights. This required a computer-generated crowd, and there was also a challenging drone running shot that we superimposed over the same angle of footage we had of a full house at Wembley."

Though Rice isn't struggling with mental health issues, "he is passionate about the topic and is a role model for millions of people around the country," Smith says. "With all eyes on the World Cup in Qatar, the England star is a relevant and credible ambassador for those struggling at this time of the year."

"Everyone suffers at different times in their life, and there's so many people out there who feel like there isn't a light at the end of the tunnel—but all it takes is a conversation," says Rice. "It's about having that support network and having people you can speak to. Because no matter who you are or what you're going through, it should be easy to speak to the people you love. Just one conversation can make a positive difference."