Bag Man: How Frank Geers Is Growing the Sport of Cornhole

A pastime moves from the backyard to the screen

The group stages 30 top-level tournaments for devotees of cornhole, a bean-bag game that traces its origins back some 140 years, though it really began to catch on at backyard barbecues and tailgate parties in the 1970s and '80s. Hole Nation, related video content and the year-old web- and app-based digital network represent efforts by ACO chief executive Frank Geers to build a media-driven, niche-marketing powerhouse around the increasingly popular pastime.

"It's a fun game that features parity, no matter the gender or age of the participant," says Geers. "There aren't too many games like that. Darts might come close, but cornhole has a psychological advantage over other games because most people associate it with a child's game. Therefore, it doesn't feel like an overwhelming challenge of skill, which lessens the anxiety of potential players."

Moreover, it's "a game that allows you to seemingly get better the more you drink," Geers adds, noting cornhole's popularity at outdoor events where beer and spirits flow. "Alcohol loosens a person up both mentally and physically, and when people don't overthink their pitches, they tend to throw better," he says.

"Pitches" refers to gameplay, which consists of underhand-tossing resin-filled bags 27 feet at a 4-by-2-foot plywood board with a 6-inch hole near the top of the far end. (In the game's early days, the bags were packed with corn, hence the sport's name.) Players receive three points for sinking the bag in the hole, and one point if it hits and remains on the board. Teams and individuals must score 21 points to win.

About 25 million folks play cornhole worldwide. Some of them are currently competing in the ACO's 15th season of events, with total tournament prize money topping $150,000. "Our average participation is 150 players per major event," Geers says. "This is up 35 percent over last season, and expected to grow."

Geers plans to triple the number of tournaments within five years. "We would like the ACO Tour to carry between $1 million to $2 million in overall prize money, with our top 15 to 20 players being able to make a living playing on the circuit," he says.

Currently, players and fans are about 90 percent male, aged 30-55, with an average household income between $60,000 and $75,000. That's basically the same group that follows NASCAR. To help the brand mine that middle-class vein, the league has been building out its digital network and pushing for a mainstream TV deal.

In our conversation below, edited and condensed, Geers discusses his game plan for continued U.S. expansion and breaking into markets overseas. 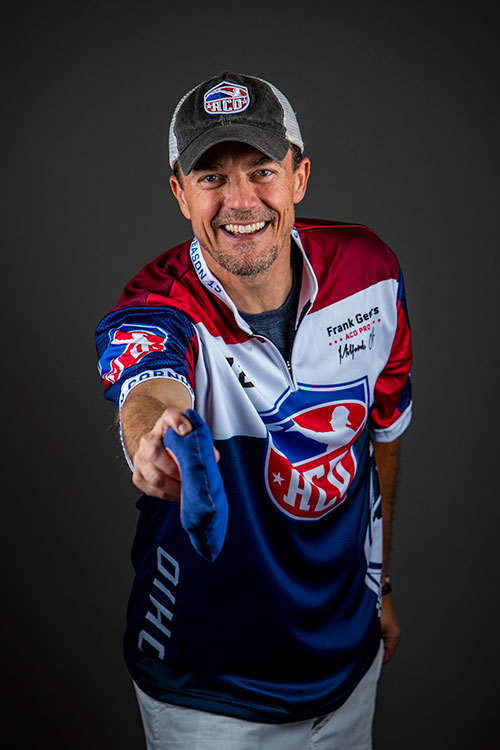 Muse: When did you start playing, and what was the initial attraction?

Frank Geers: I got involved with cornhole as an extension of my marketing company Harris Hawk 15 years ago, when I was looking for better ways to help my clients market themselves. I stumbled across the idea of cornhole. It was a simple yet fun game, and the boards and bags were billboards waiting to happen. We could logo the product to help market our clients' brands.

So, it began as a marketing play, not a league?

I originally started with the idea of focusing on being a products company, but saw people taking this backyard game competitively, so I decided there had to be a way to organize this into a sport. Over the next 15-year stretch, we created a pro tour, developed the concept of playing the game as singles, invented the "slick/stick" concept of the two-sided bag [one slick side, one sticky side, for different player grips and sponsor logos], developed rankings … and hosted 14 World Championships of Cornhole—and much more, in an effort to elevate it to a recognized sport.

Cornhole, Pickleball ... lately, we've seen these backyard games gain traction. Why is that?

Cornhole is one of those activities that isn't terribly taxing on your body. It's fun and safe. I think cornhole is becoming popular because the game is way more accessible to the average person than the traditional big sports. We all can play cornhole. There is no real barrier to entry. … Cornhole is a great alternative sport for people who maybe aren't built for soccer, football or baseball. As the tailgating industry grows, so does cornhole. There is no other activity that is more frequently played while event tailgating. Tailgating, barbecuing, camping and music festivals continue to grow, giving cornhole a bigger push into public consciousness.

What are your biggest image challenges? How are you addressing them?

One of the biggest hurdles is the homogenous nature of the league and pro-tournament participation up until this point. The origins of many of the leagues around the country are in rural areas which are predominantly white. Our goal with our marketing team is to show and promote diversity where we can. This means making efforts to diversify any original content, reaching out to players outside of our main demographic and listening to their thoughts and ideas, and pushing the message that ACO is a family and our house is your house.

How many sponsors do you have right now?

We have several sponsors for different marketing vehicles, but the most prominent would be Red Roof and Polar Bear Coolers.

What steps are you taking to grow the sport and attract new sponsors?

The continued push to have the sport airing on traditional TV networks like Fox Sports, ESPN and CBS Sports will have a big impact on cornhole and its continued growth. … It is our goal to bring our first TV series built around the sport to mainstream television through a partnership being developed with a major sports network. We are working hard to secure our partners to have the first show airing in spring/early summer 2020.

Your digital network is the main engine for expansion, yes?

We have diligently created a content distribution infrastructure that now has us positioned for a large national or global sponsor. We don't have to make promises that we will work to get something into place or grow in this area, we have already done it. The recent data from our video content distribution says it all. Our distribution channels can produce 1 million minutes viewed in a three-month span. Soon that will be down to two months, one—and then we are going to be averaging over a million views per weekend event. We've already done it twice.

And you view the network as more than just a channel for broadcasting matches?

Think about what the Golf Channel is to golf. [On the ACO Digital Network] there will be educational content, training, original programming, news shows, pay-per-view matches, industry shows related to tailgating, camping, barbecuing and the backyard. It will be the network that not only serves as the sport's digital historian, but will also blaze new trails for niche sports as we create shows that think outside of the box and cross into other genres.

Take, for example, our [2017] pilot episode of Cornhole in Backyard America. It's the idea of the backyard renovators … and cornhole happens to be a feature in those plans. It's a neat way to merge different types of entertainment with value that also opens us up to sponsors. In the pilot, part of what we saw was the building of the couple's pool. That opens us up [in sponsorship terms] to pool manufacturers and distributors, along with landscapers, grill distributors, shed distributors. We did the one show but have plans for future episodes and to enhance the product.

Still, won't it be tough for cornhole to break out if its niche?

Our product is only niche in one large area like the U.S.—but if you combine 18-20 niche areas around the world, suddenly you have 8 to 12 million people watching without the benefit of mainstream sports networks. However, we see something much bigger. What we see is a really strong partnership with a mainstream sports network where they broadcast the biggest matches from our Majors and World Championships through their distribution channels, and then we will broadcast the rest of the matches through our network and distribution channels like Facebook, YouTube and IGTV.

[The ACO Digital Network] is already sophisticated enough that we can sell advertising regionally. That leads into a program where we will exchange the English on the audio tracks with commentary in different languages. Our marketing department has been pushing for this, because, globally, American sports are very hot right now. The NFL is on its way to expanding into London and Mexico City, the NBA has a massive global footprint, and we have already had success with ACO expansion into places like Australia and Germany. Both countries sent teams to our World Championships, one each over the last two seasons. By developing commentary in different languages, we can offer sports entertainment that feels exclusive to their region or nation, and expand our global footprint as the governing body for the sport.