We Just Saw the Skittles Musical, and It Was Gloriously Silly Fun

Only one person got to see last year's Skittles commercial around Super Bowl time. This year they opened things up—well, a little bit—and gave 1,500 guests an hour's worth of good-natured meta insanity, as Skittles: The Musical, a hilarious little one-act, premiered for a single show on Broadway this afternoon.

First, the plot. Here's a brief synopsis (which won't do the play justice, but anyway):

It begins in a bodega, with various quirky characters stocking up for the Super Bowl (including lots of Skittles shout-outs). Eventually Michael C. Hall enters, hilariously dressed as a cat, and bemoaning the fact that he's dressed as a cat for a role in a Broadway musical that Skittles is putting on. (The meta shenanigans start very early on.) The other customers quiz him about the musical, dubious it will be any good. Hall then sings the first number, "This Might Have Been a Bad Idea." 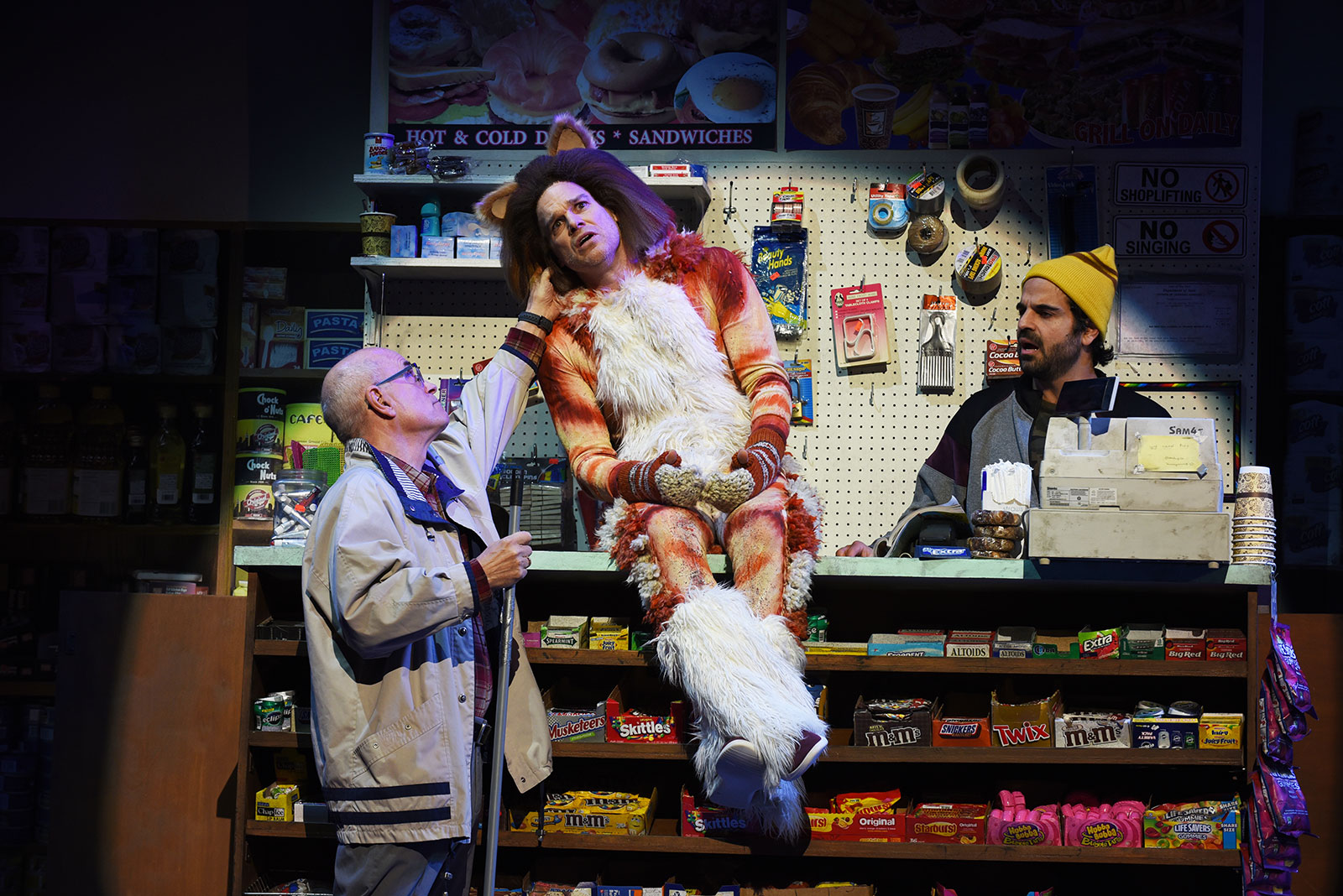 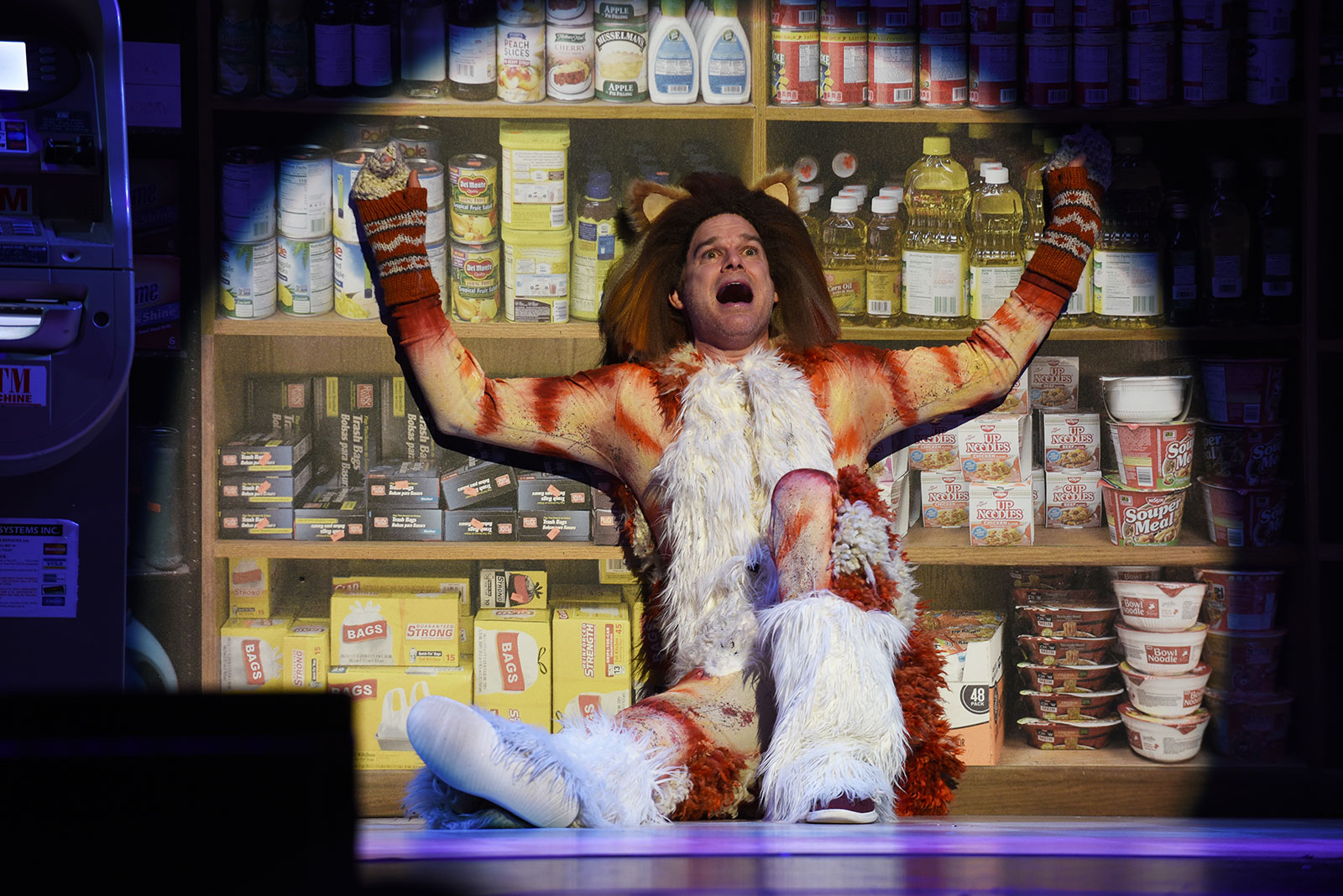 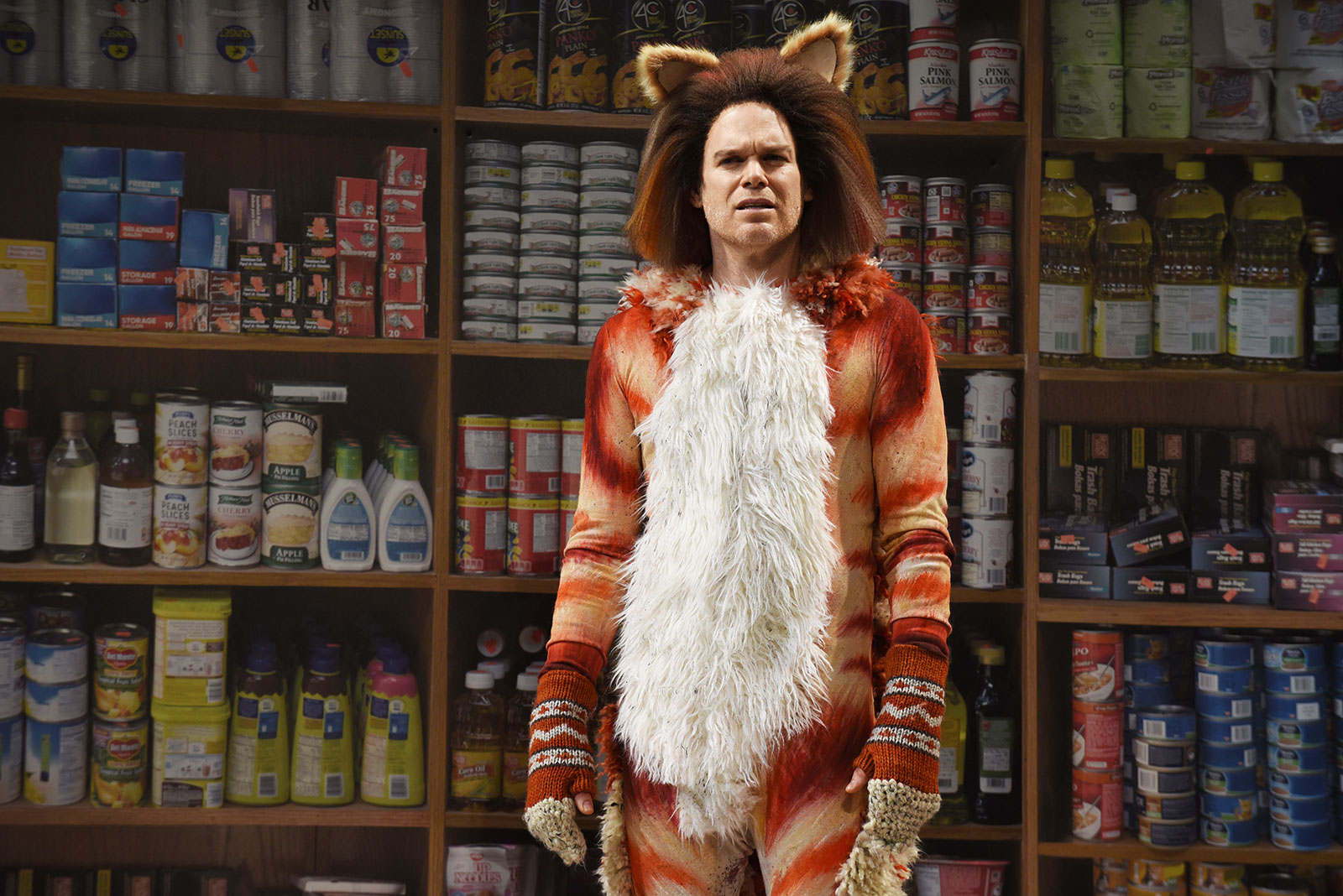 In the second scene, things really start to get pear-shaped, as audience members and a Town Hall usher (actors, obviously) start heckling Hall about how the show is boring and not what they were expecting. They are also confused about whether it will be on the Super Bowl. Hall eventually grows frustrated, says he is quitting the show and storms off-stage. There's an awkward intermission where the house lights come up and no one knows what to do.

Eventually the house lights go back down and a the third scene commences. It's set outside Town Hall, where aggrieved theatergoers (the actors who were shouting from the audience earlier) are complaining about the aborted musical they've just witnessed. Hall appears in street clothes, apparently heading home, and they blame him for the fiasco. Soon, they all sing the second number, "Advertising Ruins Everything." 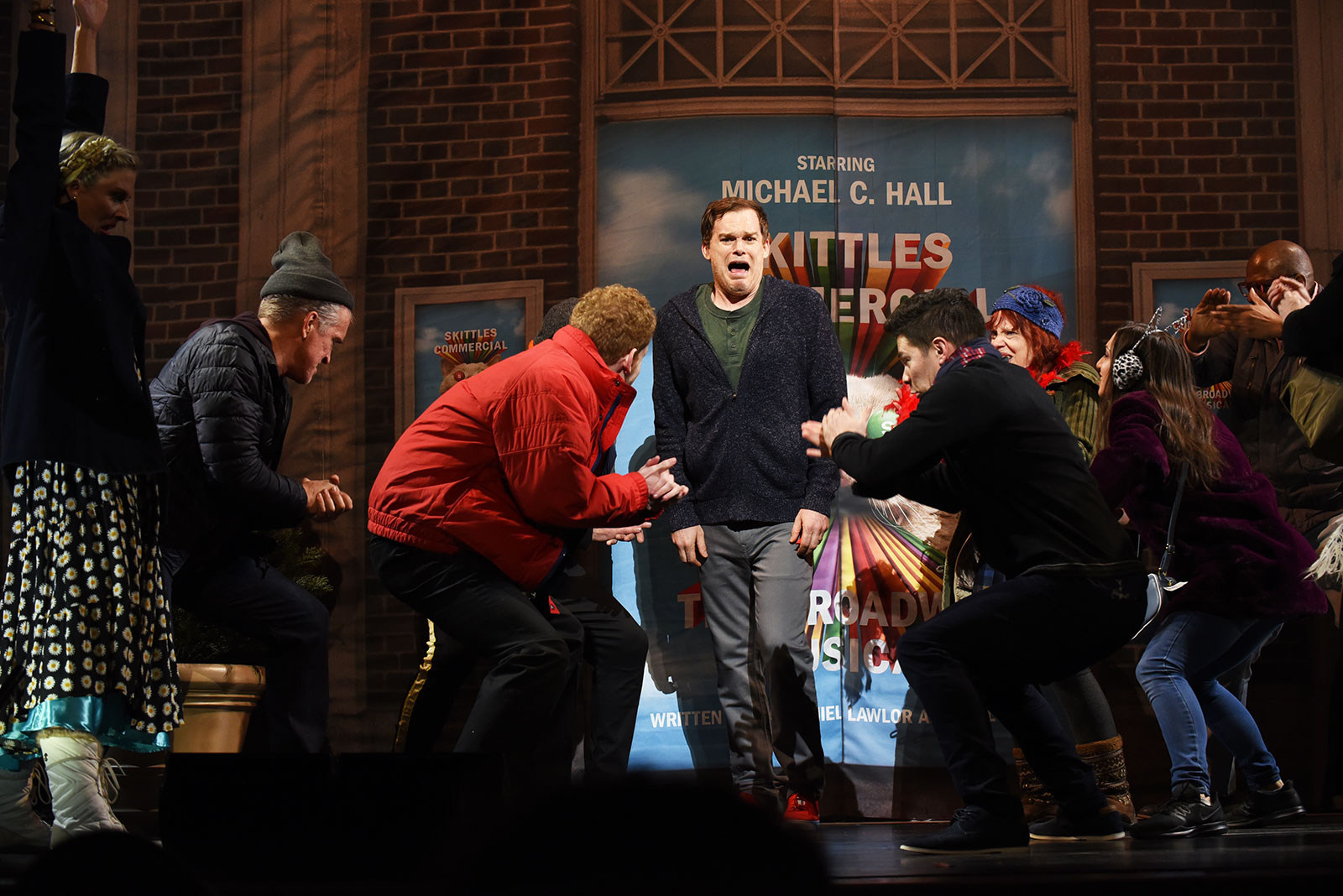 After the song, they continue bickering, as Hall, feeling menaced, tries to explain to them that they're merely actors in a Skittles ad, not aggrieved theatergoers. This sends them into an existential rage, and they set upon him—pushing him through the curtains of the Town Hall facade and back into the bodega, where eventually an ATM topples over, landing on Hall and killing him.

In the final scene, Hall appears a ghost. He runs into Winston Churchill and Amelia Earhart before singing the final number, "This Definitely Was a Bad Idea." But then, the cast members suddenly receive word that maybe it wasn't such a bad idea after all—that 600 packs of Skittles have been sold at the theater during the show, and well, isn't that great ROI for Skittles?! The entire company thanks Hall for giving his life to help Skittles sell those 600 packs. 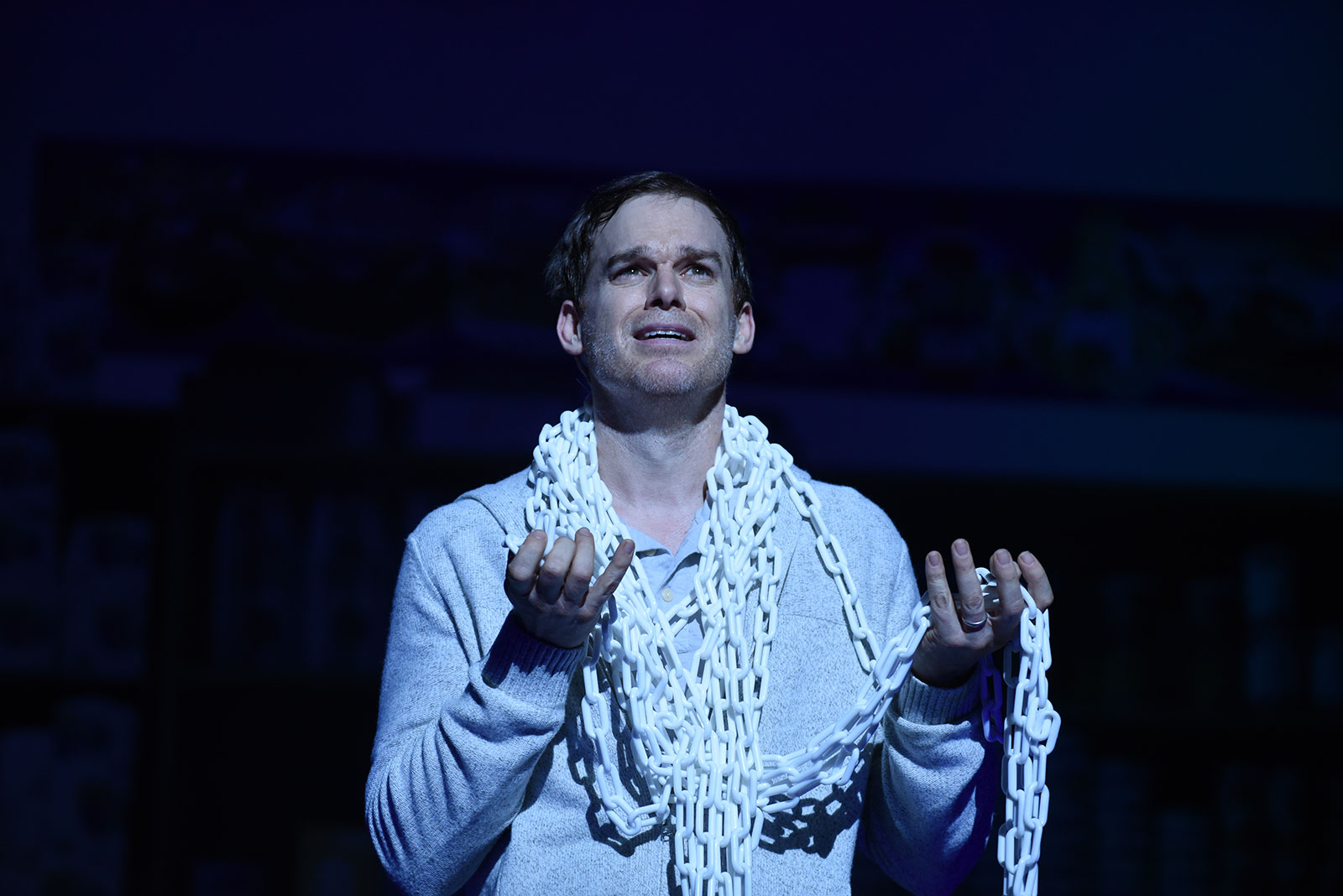 Finally, a giant Skittles end card, like the ones from the TV spots, unfurls from the sky—and the familiar announcer voice booms, "Broadway the rainbow! Taste the rainbow!" End of play.

On the whole, the production, which was less than an hour long, was very entertaining—an expert mix of lowbrow and high-concept. It took a ridiculous premise—a Broadway musical doubling as a candy ad—and went fully down the rabbit hole with it. And it got the theater world's best—Hall and the rest of the cast, playwright Will Eno, composer Drew Gasparini, choreographer Raja Feather Kelly and director Sarah Benson (along with a major assist from freelance copywriter Nathaniel Lawlor)—to bring it to life.

The pretzel-like arguments in the dialogue were particularly amusing. The press were given copies of the script; this page will give you an idea of how those conversations went down: 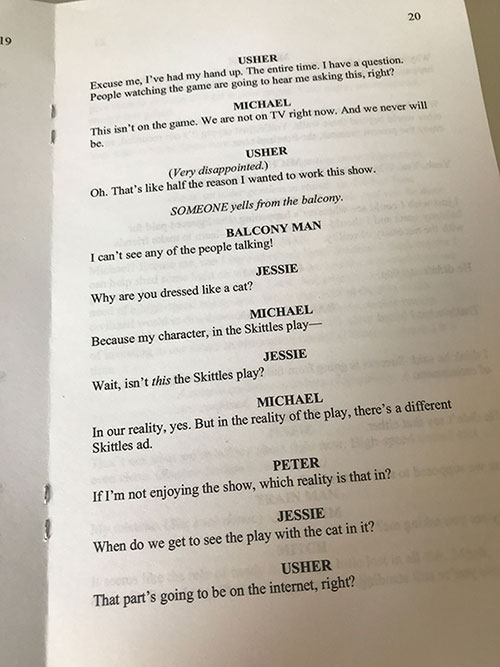 The PR value of the stunt has already been evident. (You can guess which Super Bowl campaign The New York Times eagerly wanted to write about—in the Arts section!) But beyond a PR idea, it was also a fantastic and brave media idea—surely few brands (outside of Carl's Jr.) have ever given a thought to how to write for, and produce, live theater. (Also, the songs are on Spotify, extending the scale of the work somewhat.)

Most important, the musical's mix of song, dance, existential comedy and self-aware irreverence was just irresistible entertainment. It's bizarre to write this, but the cast of a live Skittles commercial got a standing ovation on Broadway today—and actually deserved it.

The play will reportedly be performed only once (which itself feels like theater's version of a hallowed Super Bowl commercial tradition). But there were some fancy cameras around at Town Hall, so don't be surprised if DDB tries to scale this thing just a bit bigger.

Meanwhile, Adweek has a great behind-the-scenes story about how the whole production came together, which is very much worth a read. 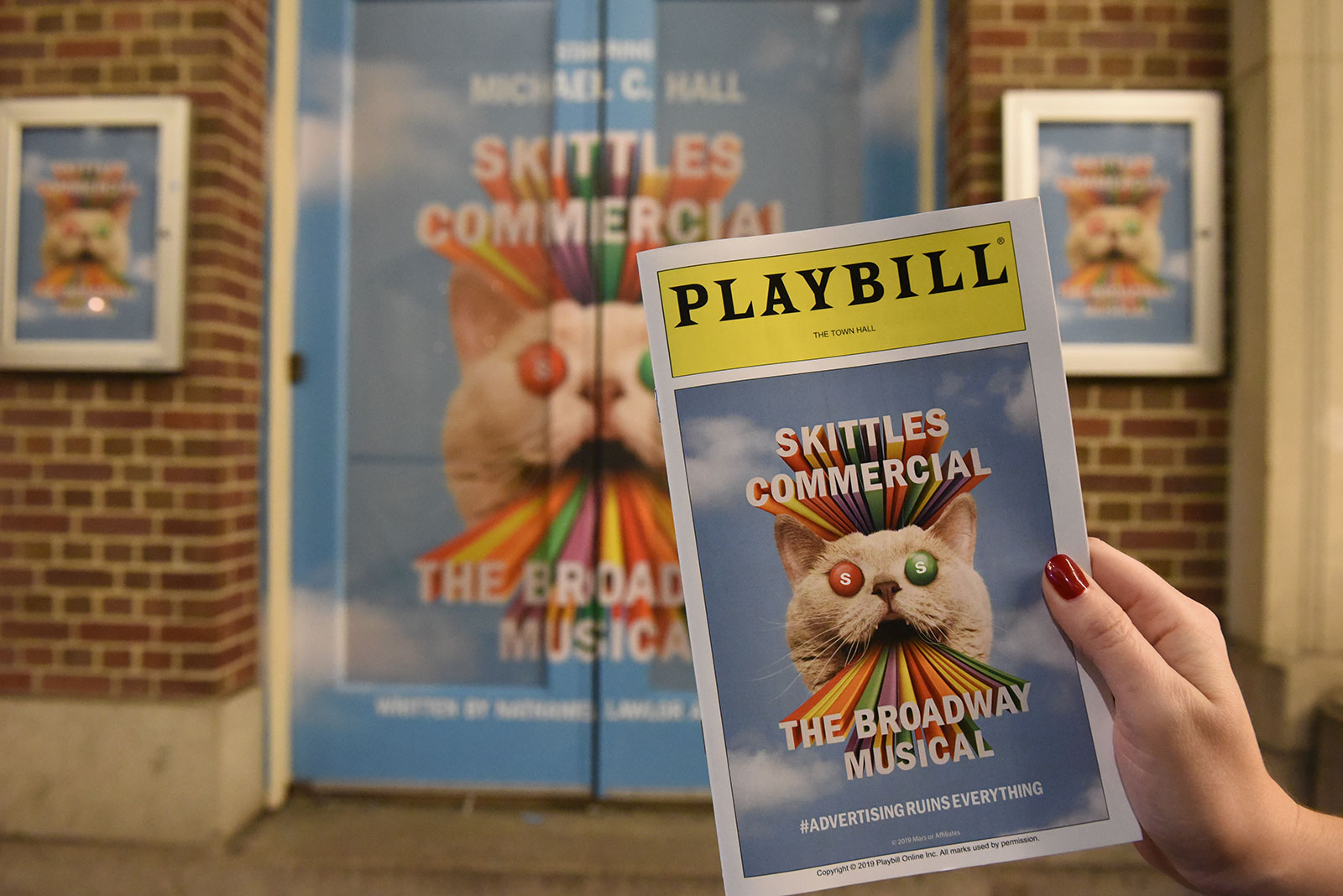