Inside the intimate Burbank digs

Creating the right atmosphere can be essential to making great music.

Just ask Ariel Rechtshaid, a partner in publishing and production house Heavy Duty. Last year, the company revamped a midcentury building in Burbank, Calif., as its West Coast hub, and Rechtshaid says the intimate, inviting 3,500-square-foot space fosters a collegial vibe that reverberates on the tracks recorded there.

"Years ago, [DJ/producer] Diplo and I used the space," Rechtshaid tells Muse. "He was just coming to L.A., and I was between places. Eventually, we found a spot and shared it. Cut to now: He moved out, and the person we subletted from moved. We were left with a decision—move out or transform it into a complex. Eight years ago is when we started working there. But as Heavy Duty, it was only a year ago that we transformed the space."

Hit makers Haim, Vampire Weekend and Bon Iver, among others, have recorded at the facility, while recent brand projects include Postmates, State Farm and Target.

"What I wanted from that space was something I feel is kind of lost—a community feel," Rechtshaid says. "Obviously, you want your privacy. But it's nice to be able to bump into people by the coffee machine. The flip side is these corporate complexes—they're essentially just oppressive, everyone is crammed in and there's not enough soundproofing. There's a metal band playing next door while you're trying to compose something. That's not what I wanted. I wanted likeminded people having a place to create and interact and collaborate." 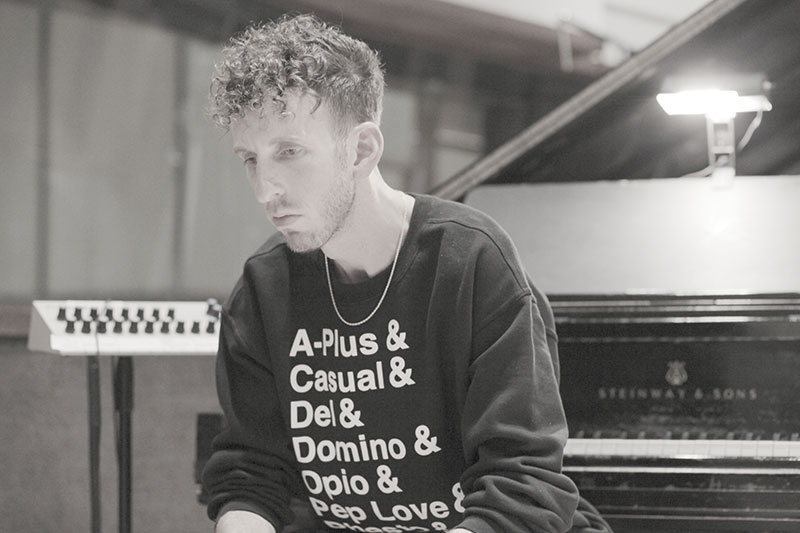 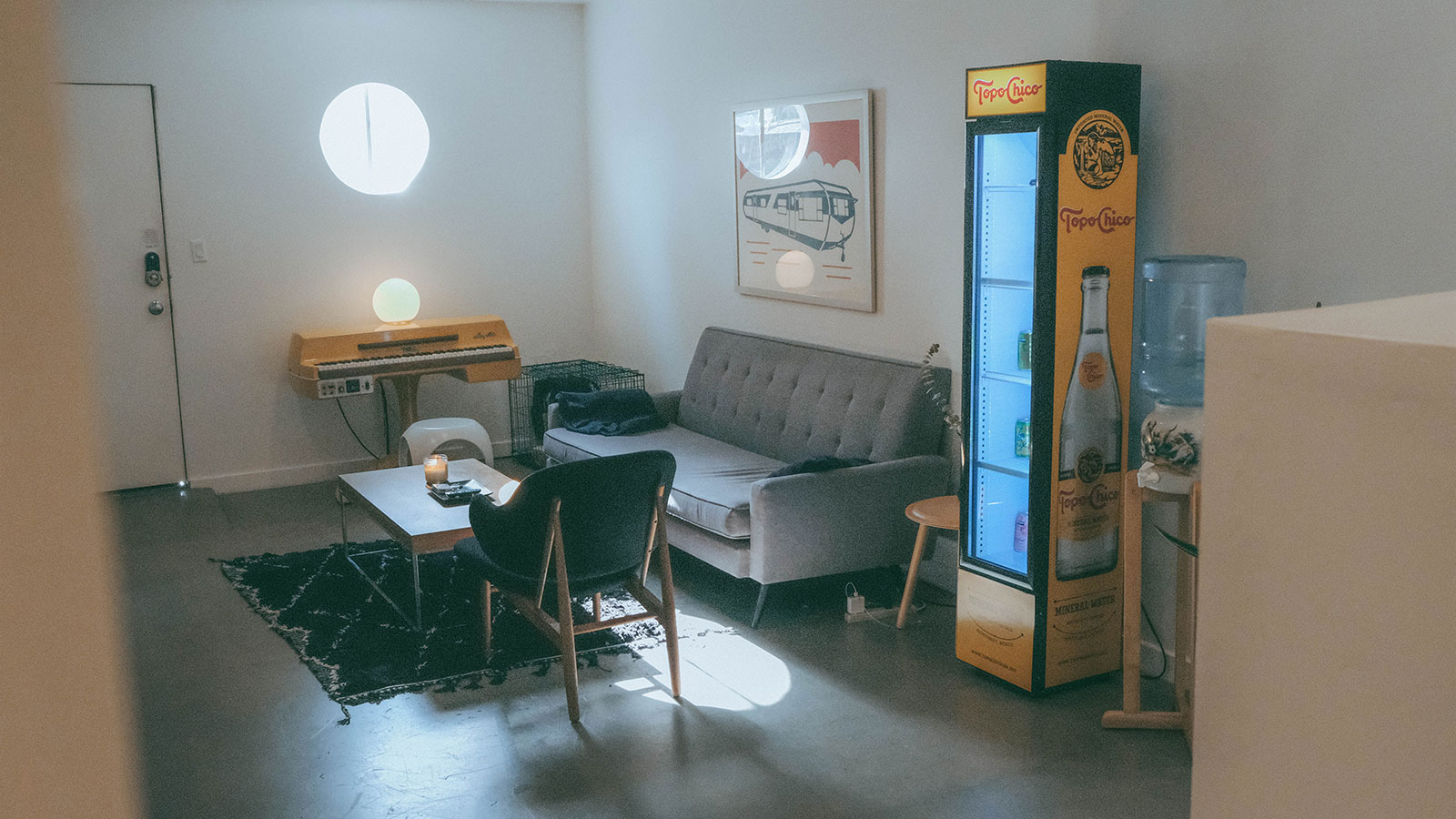 Ariel Rechtshaid: Four rooms. "A" is the big performance space. The grand piano may be in there. It kind of feels like recording school, like old-school live space. Tons of ribbon microphones and tape machines. [It has a] series console and plate reverb like a very old-school studio, with of course Pro Tools and every other kind of DAW and modern computer. "B" is primarily used by one of the Heavy Duty writers and composers, Buddy Ross, who's worked a lot with Frank Ocean and Bon Iver. The space gets used by other composers, too. "C" was my original room years back, where I did a lot of Vampire Weekend (Modern Vampires of the City), Haim (Days Are Gone) and some of Solange's first EP, True. It's more of a production room, with a small booth, big enough to cram in some live instrumentation. And then there's "D," which is more of a control room.

This is all on one level? 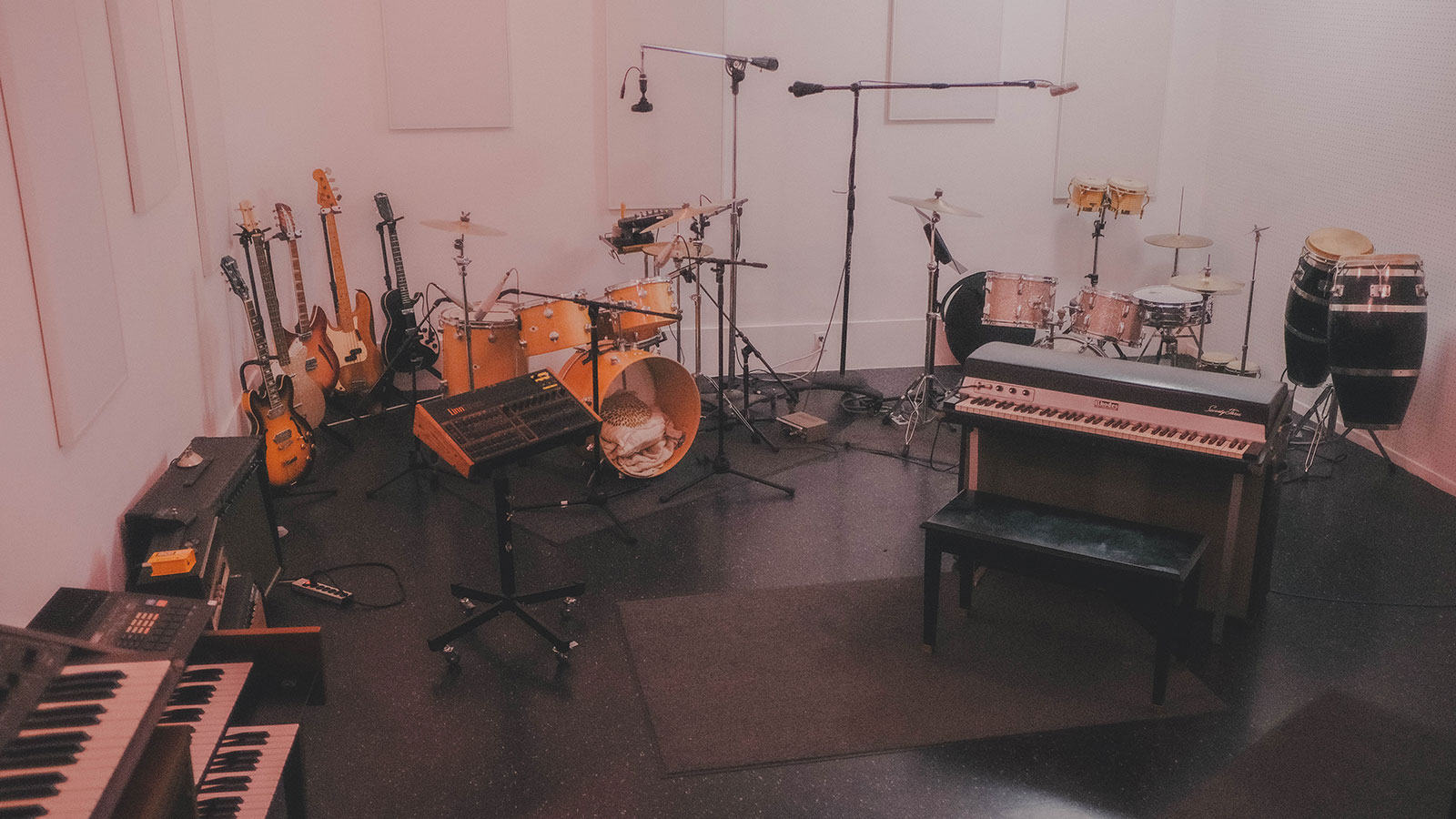 Studio A - A setup in the live room. There's a '70s Camco drum kit (back left) with close mics for a tighter '70s drum sound, and a '60s Rogers drum kit (back right) with a two-mic setup for authentic '60s "drum break" sound. Linn drum machine, Fender Rhodes stage electric piano and other various instruments. 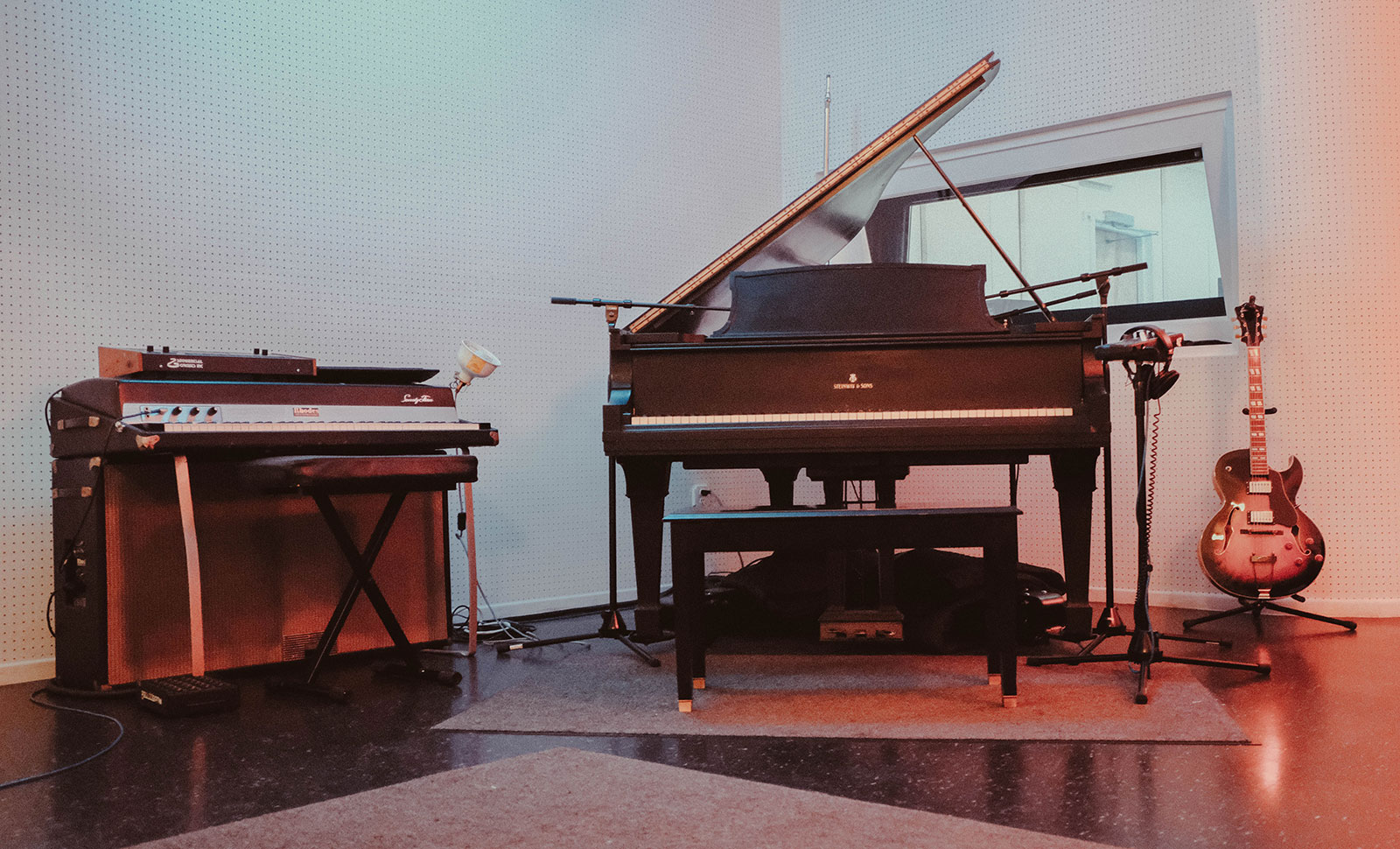 Another view of the live room and its 1920s Steinway B grand piano. 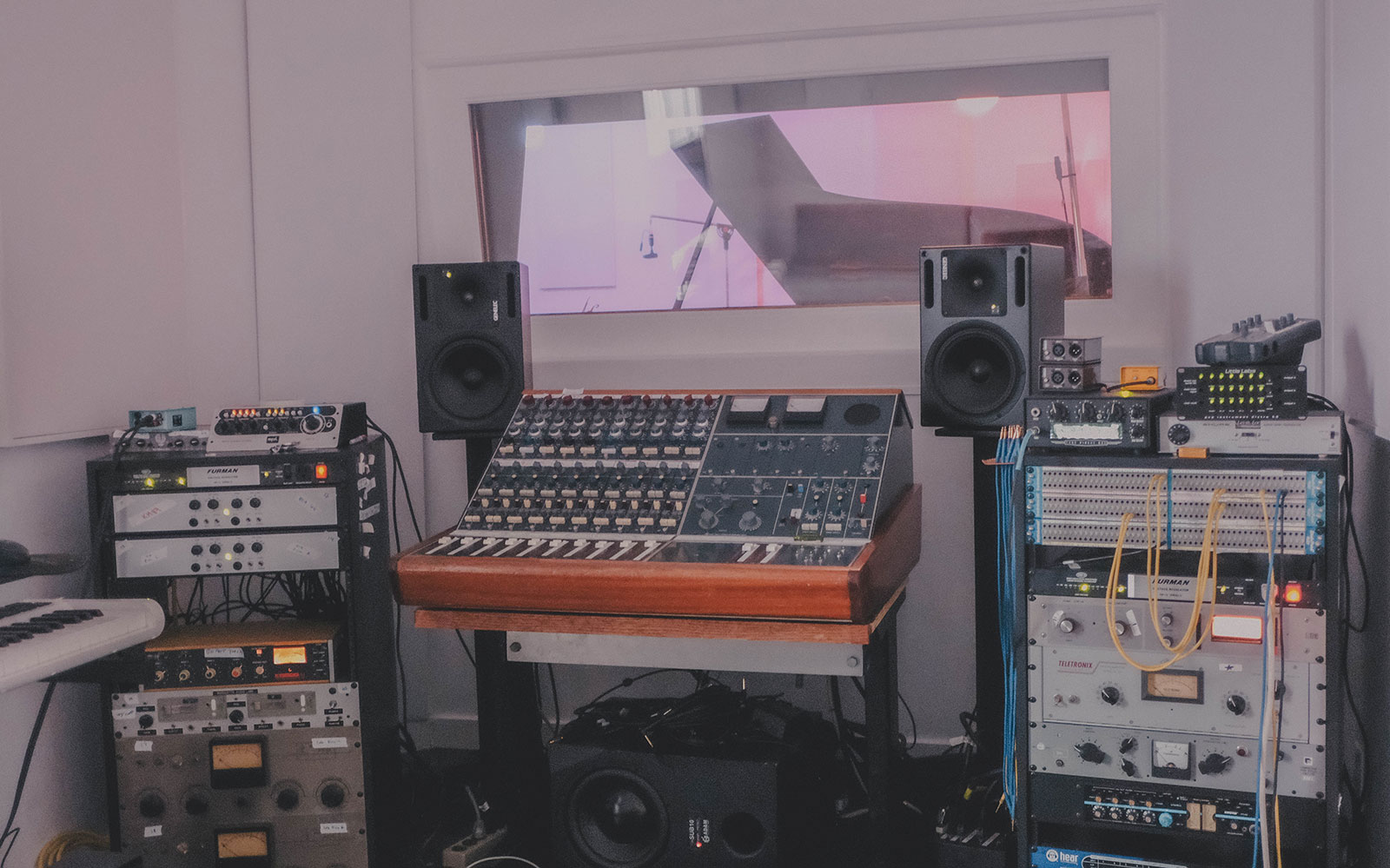 The Studio A control room. 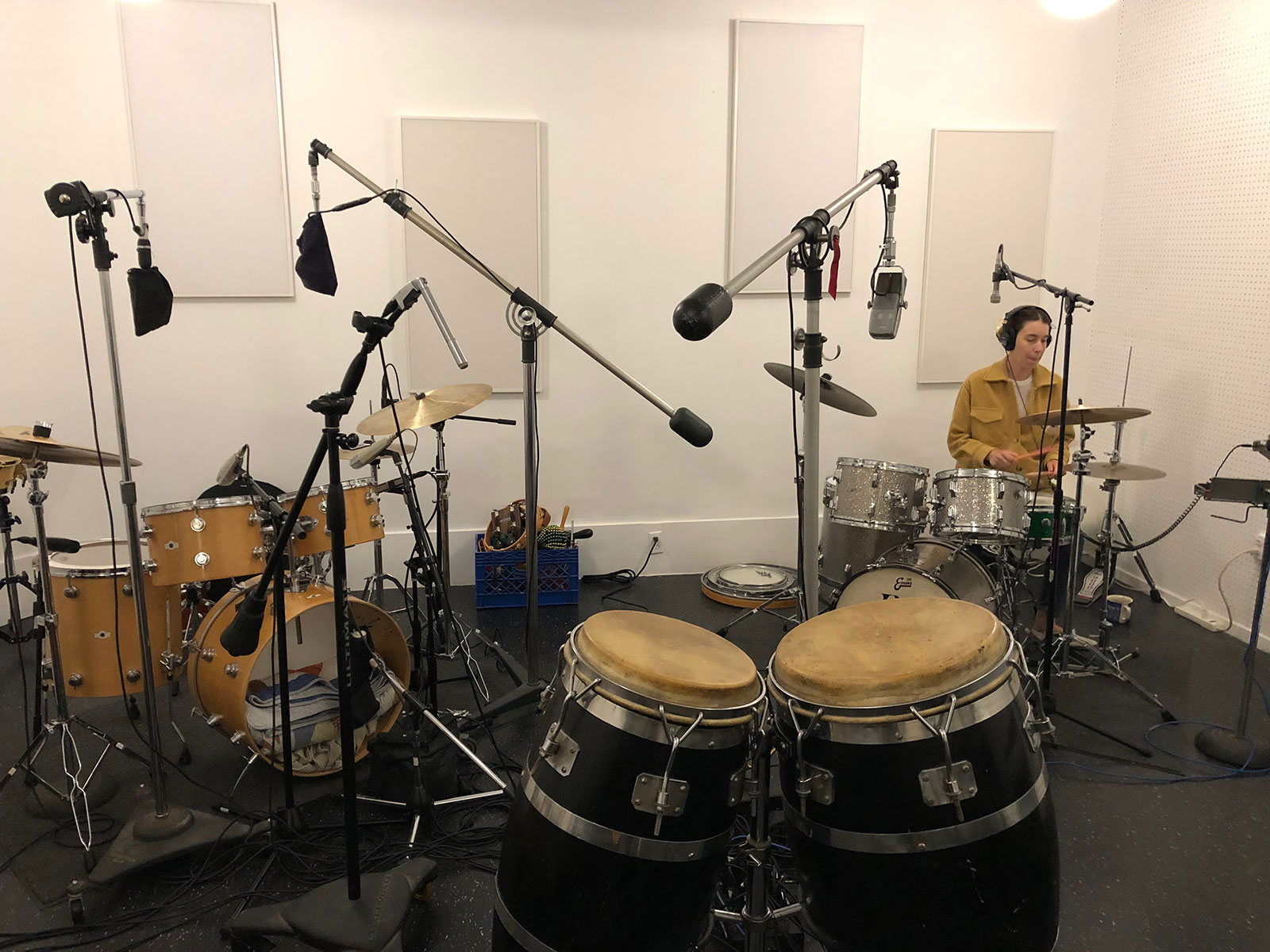 A lot of the latest Haim album was recorded at the studio. Here is Danielle Haim playing drums.

How does the ambiance affect the musicians and the people at the board?

Hugely affects it. The reason certain musical trends happen is based on environment. If suddenly everybody has access to making records on a laptop, a lot of the music you hear is going to be made on a laptop. If you're making music in your bedroom … chances are you're going to be more relaxed and experiment more. But if you're in the studio with a nice tracking room, you have the opportunity to play instruments with more people at the same time. The energy of people performing together is magical. Also, you get to run into people in the hall, potentially get reactions from people outside the project—perspective. It's much less isolating.

Have you had that happen? Bon Iver working in one room, and all of a sudden, Adele wanders in?

Ha, maybe not that exactly. I remember being in a room working on a song and Diplo walking in and giving his input. Not necessarily jumping on the mike and adding something, but when you're creating, it's nice to have other people offer some things off the cuff. 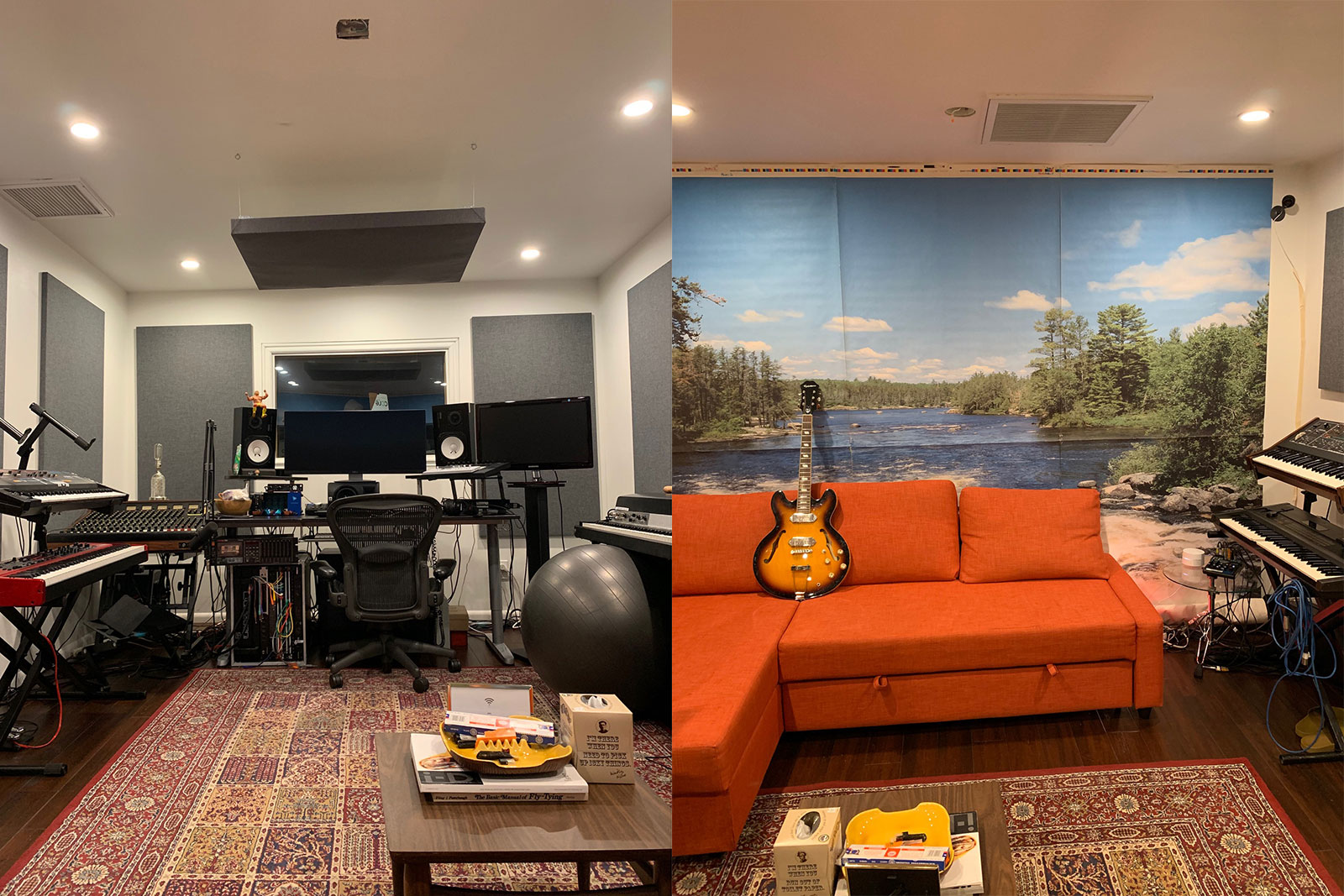 Studio B - Producer/songwriter Buddy Ross, who is signed to Heavy Duty Publishing, has this room at the studio. Buddy has worked with Frank Ocean, Bon Iver, Vampire Weekend, Haim and many others.

Is there an example of the studio affecting the sound of a song?

"Sympathy" by Vampire Weekend could've gone a number of ways. Finding ourselves in a tracking room with a fantastic upright bass player, Sebastian Steinberg, gave us the heart of the arrangement. That and a sort of acid-house beat [the group's lead singer/guitarist] Ezra Koenig and I had made in my home studio became the main elements that built the song. It was fun to see Apple rearrange it for the Apple Watch spot.

You mentioned "performance space." Do you want artists to feel like they're doing a live show?

Absolutely. Inspired. An inspired performance. What you tend to get in a studio is a precise recording of the notes, melodies, words that are written. This is good for some moments, but what's difficult to achieve is the heart of a live performance. Some people are able to bring that wherever they are, others need the right environment.

Can you talk about recording some recent ads you're proud of?

We worked on production for the NVDES track "Brazooka," which was featured in the iPhone 11 launch, in our studio. We also did the recent work for the Postmates campaign, which involved live flute and percussion. We did a fun and silly radio campaign for State Farm where we parodied iconic '90s hits. The studio was a useful tool to tap into the all the various production styles we had to quickly cover—Billy Ray Cyrus, OMC, Vanessa Carlton, Genuine.  A lot of those spots are on the radio right now.

I feel like every time I'm working on a project, the exception is when it's not hard. The only thing that can get easier is slowly accepting the process and realizing it's not going to be easy.

When you were young, did you ever dream this would be your life?

What did you see yourself doing?

I played in a band in high school, but music was always a fantasy for me. It was untouchable. Even though I grew up in L.A., I never really saw a famous musician I admired in person. I had an interest in architecture. But in high school, I started a band and we got a record deal. My friends were going off to college and I was touring around the world, and I realized I wasn't into performing, but I was really into the creative process. 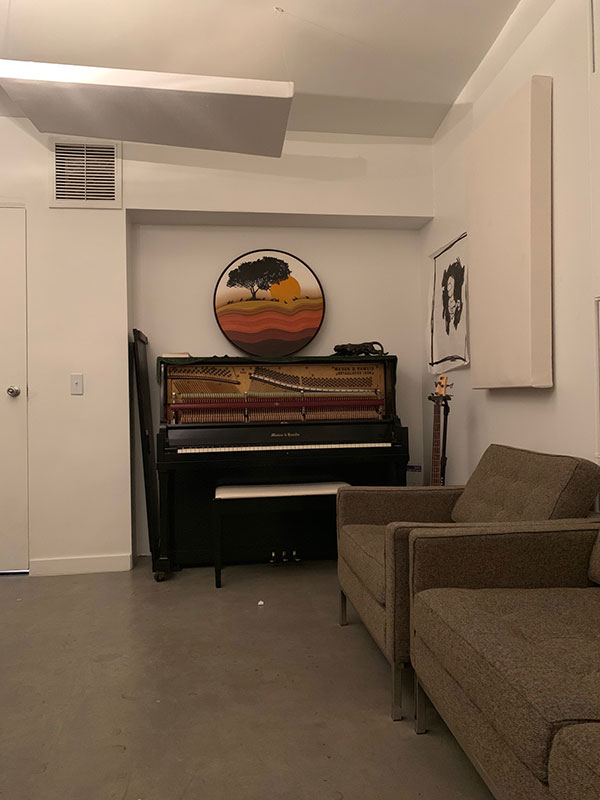 So, advertising opened up a whole new musical world for you?

Absolutely. I'm sure there's a version of the disgruntled composer who's making music that feels like it's sucking his or her soul. For me, it's always another opportunity to experiment and try something I don't normally get to try.

If you could work with any music artist from history, any band, who would it be?

I've thought about that, and it's hard to answer, because music was such a fantasy for me. I've been put in a situation where I found myself in the studio with someone like Madonna, whose legacy and music are so important, and that's a huge weight. I found myself in the studio with Usher and I did what I could. And as it turns out, I'm proud of it, but…

It was so successful, you should be proud!

I know. But what I mean to say is, it's one more layer of intensity, and I take it very seriously, and legacy is very important to me. 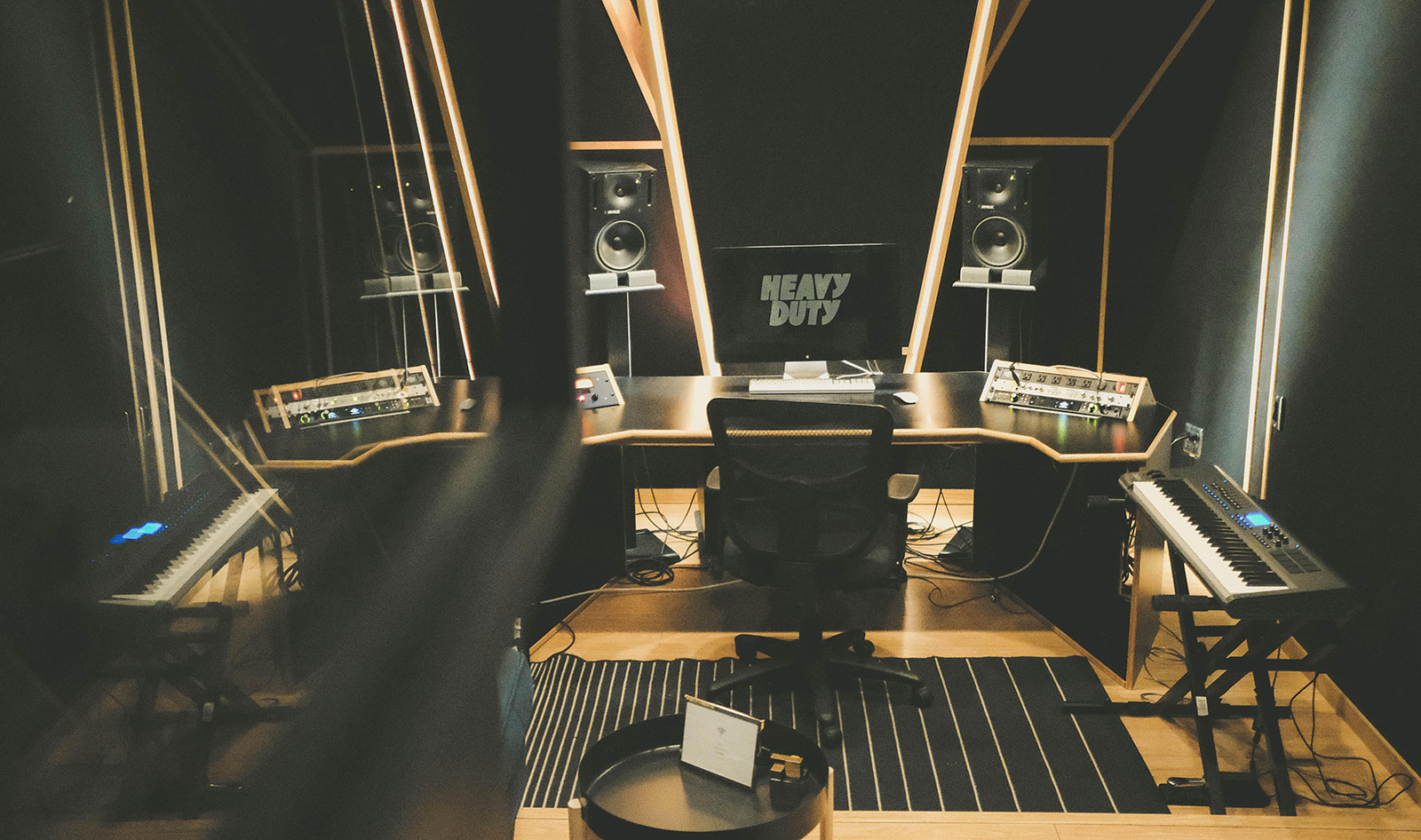 Studio D - Diplo worked on a lot of hits here, including "Lean On" for Major Lazer and "Were R U Now" by Justin Bieber.

I have no idea. "93 'til Infinity" by Souls of Mischief … "Israelites" by Desmond Dekker … It's all over the place, honestly. It can be '90s hip-hop or reggae, ska, depending on the day, the Claps followed by the Clash. I don't have a favorite song. Even Leonard Cohen, Bob Dylan, it just goes on and on.

What advice would you give somebody just starting out?

I would tell them not to expect anything or anyone to help them other than themselves. And not in a daunting way. So long as you hold yourself to a high standard and try to make the best music with whoever is around you, you'll be OK. You've just got to take what's around you, do the best you can, try to be as unique as you want to be. Take a hard look at what you're doing. If you feel like it's good enough, keep at it. If it's not good enough, get better at it, and eventually it ought to do its thing.