Plus, his own aspirations as a musician

"When I look back on my childhood, the first 12 years, before I picked up an instrument, feels like the identity crisis," says Alec Stern, director of music at DDB Chicago and its McDonald's-focused sibling We Are Unlimited. "Then there's this thunderbolt moment where I picked up a guitar for the first time, and everything fell into place."

During a sleepover at a friend's house, Stern recalls, "in the middle of the night I woke up and heard music playing from his older sister's room. She was with a friend who was teaching her to play guitar. She was like, 'Hey, man, do you want to play?' They taught me 'Satisfaction' by the Stones and 'Secret Agent Man.' When my mom picked me up the next morning, I hopped in the car and said, 'Can you take me to the guitar store?' "

Idolizing Pink Floyd axe-slinger David Gilmore, Stern spent years refining his chops, and ultimately played in bands at Chicago venues such as the Double Door, Bottom Lounge and House of Blues. He's released two solo albums online, with a third on the way. "I'm planning on hiring some PR, seeing if there's a label that might be interested," he says. 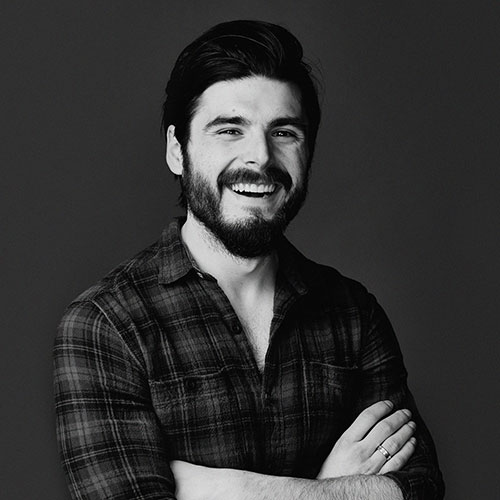 In the marketing world, Stern parlayed his skills into five years as a music producer at Leo Burnett, switching to crosstown shops DDB and We Are Unlimited at the tail end of 2017.

"I had definitely been interested in expanding and seeing if I was capable of running the show," he says. "Then I got the call to create something from scratch and bring the role of music deeper into both agencies."

At 28, he's young for such a significant role, and performs his job pretty much as a one-man band, without a huge music department for support. He bounces between the two Omnicom shops, fine-tuning projects for clients such as McDonald's, Miller Lite, Skittles and State Farm. This year, he served as a Clio Music juror in Use of Music.

In our conversation, edited for length and clarity, Stern discusses his creative approach and explains how music helped shape some key campaigns.

Muse: What was your first big assignment at DDB?

Alex Stern: When they won Miller Lite shortly before I was hired, the client told the agency, "We want to be a music brand." They hadn't been fully embraced as music-centric the way a lot of their competitors had. They said, "We want this to be a focus when you guys are working with us." I think that was one of the biggest reasons I was hired. When I came on board, that was assignment number one: Meet the Miller team and figure out their position as a music-centric brand.

How did you proceed?

We asked where they thought they were succeeding, and where they thought they were lacking in that space. It was a lot of questions that had nothing to do with music. It was just understanding what they thought of themselves as a brand, how they saw themselves in the marketplace, what people thought of them. Where we landed was contemporary rock, and pairing that with a funk-soul kind of sound. Real performances, not so much with computers.

What's an example of how you put that into practice?

There's an ad where a guy's holding a can, and he walks to his turntable, flips over a record, puts down the needle, then walks away. I remember when I saw that script, saying to the team, "This is one where we need to nail the music. There has to be an amazing payoff once he puts that needle to the groove—something that feels intrinsically Miller."

We landed on a song called "How I Like It" by this incredible soul singer named Lee Fields and his band, the Expressions. They are one of the tightest funk and soul groups on the face of the Earth. Lee Fields is probably in his 70s; he's lived an incredible life, and he's still making incredible music. The tone, the feeling, the attitude, the tempo of the song, all fit the swagger of what we had shot, the walk of this guy to the turntable. Sonically, lyrically, in terms of style, all those things came together for a perfect punch.

You've done interesting work for McDonald's. For the "Delivering Happy" Uber Eats intro in May, why did you pick Della Reese's "Come On-a My House"?

This spot was our coming-out announcement for that collaboration. I had gone through hundreds of songs. I have a few different versions of this track in my library. And I remember thinking it was a really fun, approachable way to talk about delivery. We wanted something that didn't take itself too seriously.

McD's "More in Common Than We Think" spot from last year had a social spin, and the music has a much different feel.

The brand wanted to do a larger kind of anthem spot. This place is extremely diverse—you'll see all walks of life there. They wanted to create a spot that celebrated the differences of everyone who comes through the door. So this was a project I felt immense pressure on. The clients were hoping for something spectacular. We had sent in a couple of scripts that we felt wonderful about, and we knew there would be no dialogue. Music would have to carry the visuals.

I searched for weeks. I hit up every label and publisher. And by total chance, just Spotify worm-holing on the train, this song comes on, and the lines are, "The only difference between you and I is everything and nothing at all." I looked down, and it was "The Only Difference" by an artist I had never heard of—Beatchild & the Slakadeliqs. It was like Columbus discovering America. Everyone was in love with it, and we went out and shot the thing.

More In Common Than We Think | McDonald's

It felt like the perfect marriage of audio and visual. I was so thrilled to work with an indie artist and give him this sort of platform. I had a meeting with some of his people last week, and they were telling me the artist is getting ready to have a second child, and the fee from our license was life-changing. He's going to be able to take a few months off the road to be with his new baby, which he might not have been able to do if this license hadn't gone through.

For McDonald's celebration of International Women's Day in 2018, you commissioned an original tune?

That was one of the most amazing projects I've gotten to work on. It was a remarkable idea that seemed to capture the imagination of the entire country. It was flipping the Golden Arches into a W. Our ad was going to follow this woman who owned and operated a number of McDonald's restaurants with her daughters. We had this notion that this was going to be a beautiful, poignant, emotional spot.

We were working with an amazing composer out of Chicago named Bryan Rheude. Less than 24 hours before the spot was going to ship—and there was a non-negotiable ship time, because it had to be live on International Women's Day—I got a call, probably 10:30 at night, from my director of production. He says, "We're screwed. The music is not going to work. What we shot is completely different from what we thought we were going to shoot." We were anticipating a sweet, poignant spot. Bryan composed based on that. But in what we shot, this woman is just dripping swagger. There's an element of cool and confidence we could never have anticipated.

I felt an afro-beat song would work really well. I knew I had to find one. Probably around 11, I called Bryan and said, "I'm so sorry. This isn't going to work out." He said, "What are you looking to do?" I explained a little. And I'll never forget, he said, "I can get this done." I said, "It's got to ship tomorrow at like 8 p.m." He said, "I can get you something at 6:30 in the morning."

So I stayed up that night paralleling, searching online for songs that might work, just in case. At about 6:20 a.m., I got a song in my inbox [from Rheude]. It was flawless. It was a masterpiece. When you're working with amazing people and your back is against the wall, a lot of times genuine miracles can happen that could not have happened any other way.

For State Farm, which is all about coverage, you commissioned cheeky covers of five songs from a music company called Heavy Duty Projects for radio spots. What was that all about?

That was really fun to get the work on. We just went through hits from the '90s and early 2000s, seeing which ones would work. One of the songs that we re-recorded was [Bill Ray Cyrus'] "Achy Breaky Heart," and that was right before the "Old Town Road" craze, so State Farm came off as really culturally savvy and smart.