The transformative power of creativity goes on vivid display in a conceptual music video that follows Ludwig Göransson as he crafts his Emmy-nominated score for the Disney+ Star Wars series The Mandalorian.

division7 director Isaac Ravishankara, working with production house Reprobates, delivers a three-and-a-half-minute visual essay on the artistic process. As the film unfolds, Göransson, an Academy Award winner for scoring Black Panther, explores galaxies far, far away, using his imagination and skill for transport. (Though a starship does eventually show up.)

Ravishankara shot the effects-driven sequences on the huge Volume soundstage in Manhattan Beach, Calif., where much of The Mandalorian is made, using live capture techniques and massive LED screens.

Strap yourself in, because fantasy and reality merge as the composer plays multiple instruments—most notably a bass recorder—to weave his starry spell:

During the clip, which was made for Disney/Lucasfilm, Göransson travels to various Mandalorian locales such as the Roost Hangar, Nevarro Safehouse, Mos Eisley Hangar, and the desert at dusk. Appropriately grandiose, yet surprisingly intimate, his journey mirrors themes of The Mandalorian story itself, with Göransson's search for the perfect flow and timbre synching up with Din Djarin's lonely quest through space.

"The overall message of the piece started from a very simple question: What does it FEEL like for Ludwig when he creates a piece of music for a world like The Mandalorian?" Ravishankara tells Muse. "So, the idea was to start by showing him physically playing music in his studio, but then transition into a more abstract representation of what is going on in his head."

He adds: "The idea of the ship coming into dock—not only is it an iconic image from the show, but it represents the crescendo of the music, where everything builds and clicks into place." 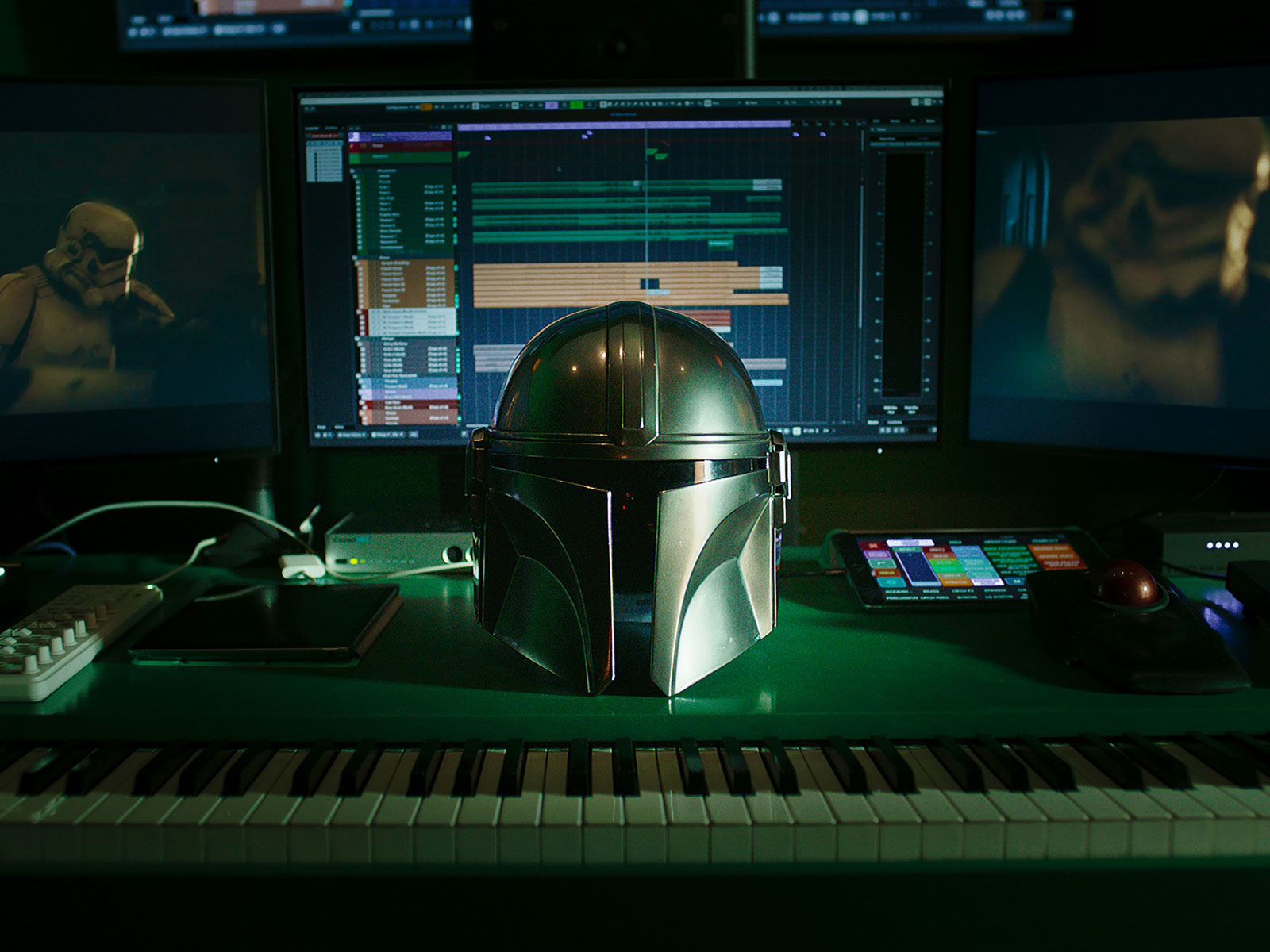 Below, Ravishankara—who previously helmed this stunning Volunteers of America PSA, along with spots for Adidas and OnePlus—takes us behind the scenes and reveals how he carried on with production even after half of the footage went missing.

Muse: How'd the project come together?

Isaac Ravishankara: Ludwig's team reached out about wanting to create a visual accompaniment to the theme song in order to showcase and celebrate the score for the show. My friend [director] Hiro Murai, who has worked with Ludwig in the past, recommended me because he knows I've always been a huge fan of the films. Ludwig and I got together and discussed an approach to making a more creative documentary of his process, and over time that morphed into something that's a bit more of a music video in presentation, since he'd obviously already finished all of the music.

It was always going to take place in his studio. But as we discussed ways to represent the bigger symphonic elements, which he recorded with a full symphony at Disney's studios, I suggested the possibility of shooting on the Volume stage to match that sense of scale. His team reached out to [showrunner] Jon Favreau's team from The Mandalorian, and to my surprise, everyone was excited about the idea. So, we started putting the pieces together.

Can you take us through the production process?

We shot the video over the course of two days in March. The first day was at the Volume stage, the day after Season 2 had wrapped production. It was also the day everything really hit the fan with Covid. We found out that the NBA was shutting down while we were on lunch.

Then the first half, in Ludwig's studio, was shot two days later. We all discussed whether to finish the production, given the state of things. But we had a very small crew, and a short day, and already had the big half of the project in the can after months of lead-up, so everyone decided to just go for it and be super careful. The following day, everyone went into their respective quarantine situations.

Besides the strange unknowns about Covid-19 at the time, the biggest challenge was wrapping our heads around shooting in the Volume. As far as I know, we are the first and only production so far to use that stage beyond the show itself.

Luckily, we had the crew from the show there with us for prep and to guide us through it. The Volume is an incredibly powerful tool—a 70-foot-plus cylinder LED environment. But that requires a tremendous amount of technological expertise to create what is a much more tactile and analog shooting environment than traditional green screen.

What was it like personally, as a director, working in that space?

I can't express how much of an honor and a joy it was to be able to shoot a portion of the project within the Star Wars universe. That first time we set up for the shot of the ship coming in, and you look up from the iPhone viewfinder to see a full-size spaceship flying toward you—my jaw was literally on the floor. Jon Favreau stopped by for our last setup to say hi, so that was also a treat. Swingers [from 1996, which Favreau wrote and starred in] is one of the movies that made me want to be a director.

Were there any big surprises?

There was a moment, as we began day 2, where we discovered that all of the footage from day 1 had been deleted in the hand-off between camera teams. But fortunately, we found out our Volume DIT [digital imaging tech] had taken home a backup copy. Phew!

Who's the audience, and how will you share the film?

Disney has rightfully taken a huge amount of pride in not just the product, but the process, of making The Mandalorian. And so they went about creating a series of BTS vignettes about the various aspects of production. The audience was always intended to be fans of [Göransson's] music and fans of the show alike. It was released by the Star Wars and The Mandalorian social media platforms. The goal was to release it in conjunction with the voting period for the Emmys, as an elevated "For Your Consideration." And now, with Ludwig being nominated for Best Score, the hope is that the piece can help nudge the Emmy voters in that direction.

I like how the film ends, with the camera slowly pulling back, and Ludwig framed by the soundstage door, and then it closes, becoming a field of stars.

That shot came to mind when I went to scout the Volume for the first time. To me, the most striking thing, visually, was not just the virtual world that's created inside, but the physical barrier between that virtual world and the very real stage location around it.

The idea was to deconstruct the world piece by piece in a single shot to end the video, bringing Ludwig back into reality. So, we show the desert sunset disappear in front of our eyes as the virtual environment resets to white. Then we pull back through the LED screen doors, as they are closing, to showcase the Volume itself. Classic Star Wars, like a starship squeezing through a tightening space just in time.

The blue LED "on" lights on the back of each video panel always looked like stars to us. And so it was Ludwig's idea to transition this very end image to reference the end of each Star Wars film, where we end on a star field as the music kicks in.