Volunteers of America captures 'The War Inside'

In this stunning spot from faith-based charity Volunteers of America, a man walking down a Los Angeles street comes face to face with … himself, and engages in a fierce physical struggle.

Devised by The Richards Group, the minute-long film features two actors and employs a rough/athletic dance style from Israel known as Gaga, acrobatic camerawork and deft editing to achieve its impressive effects.

Its goal is to educate the public about "moral injury"—the debilitating guilt some people feel when they take actions that go against their ethical codes and personal belief systems.

The syndrome causes internal strife and conflict, and can make sufferers feel as if they're constantly fighting with themselves, waging an internal battle against elements of their own psyche. Hence the spot's title, "The War Inside."

A soldier taking lives in the line of duty, or a working mom forced to be away from her kids, might suffer from moral injury. Left unchecked, guilt and self-loathing can fester, leading to extreme stress and, in some cases, homelessness, addiction and violence.

Directed by Isaac Ravishankara, with the "fight" staged by Israeli choreographer Danielle Agami, the film launched on Tuesday—World Suicide Prevention Day—with a takeover of the Nasdaq and Reuters digital screens in New York's Times Square.

A print ad tells the story of a nurse who struggles with moral injury after losing a patient. She blames herself, questions her self-worth, and uses drugs to numb her emotional pain. 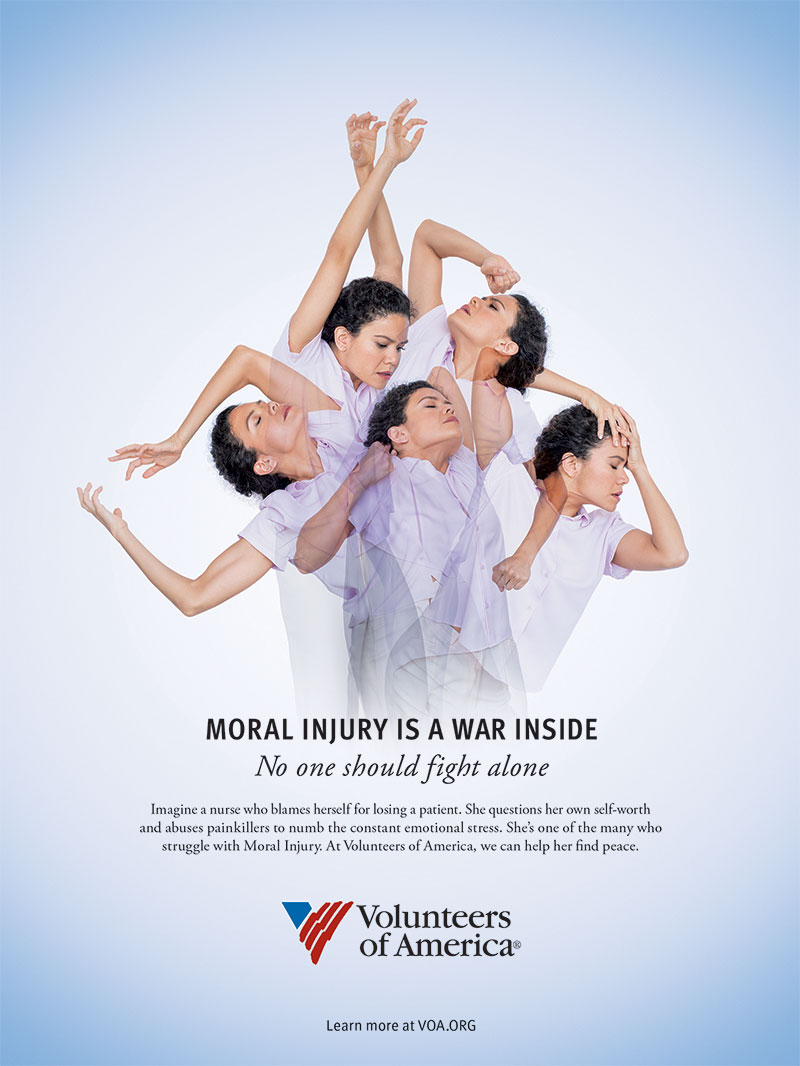 There's also an AR experience activated by a special picture card for folks who follow VofA on Facebook:

The War Inside - AR

Taken as a whole, the campaign—especially the TV spot, which stars Jordan Lovestrand, from Agami's dance troupe—breathes life into an obscure academic term and vividly links it to the here and now.

In a conversation below, Richards Group copywriter Katie Bernet explains the agency's approach to creating "The War Inside."

Muse: Where did this idea come from?

Katie Bernet: The idea came from a conversation with Rita Brock, PhD, a foremost authority on moral injury. She told us that people who suffer from moral injury often feel like they're at war with themselves—like they're constantly stifling an evil twin. We chose to use a metaphor, "The War Inside," because it helps people understand what moral injury feels like. Even if they don't get it intellectually, they'll feel it. Dance seemed like the perfect way to bring that metaphor to life. It's such an emotional, physical art form.

Why tackle this specific issue?

What was involved in making the video?

We shot this at an intersection in Los Angeles. Instead of using one dancer for both parts [and putting the film together in post], we used a professional dancer, Jordan Lovestrand, and another dancer, Joshua Bergner, as his body double. With deft choreography, camera angles and visual effects, you only see Jordan fighting with himself. We felt that having Jordan interacting with another person would create a realism that you wouldn't get if he did both parts singularly. The piece was choreographed by Danielle Agami. It's a style of dance that originated in Israel called Gaga. It's never been used commercially before. We're very proud that we were able to cast real dancers and such a groundbreaking choreographer.

One very cool thing about working with [director] Isaac Ravishankara is that while he's not a trained dancer, he taught himself to dance so he can move with the choreography. That kind of passion makes a huge difference.

Did the crew face a lot of challenges shooting the spot?

We shot in a single day, but a lot of planning went into that day. Our director did a lot of research and built a full backstory for the character using real accounts of moral injury. He added so many details that you might not notice on first viewing, but you feel them. It's very visceral. You may notice that the men have slightly different eye colors. That was intentional. One version of this man is the aggressor, and the other is fighting back.

Joshua, the body double, had long curly blond hair before the shoot. To make the talent match, we had to shave it off for the shoot. We're really grateful that he let us do that. Also, Jordan's shiner isn't makeup. That happened in a dance rehearsal, and we decided to keep it since it fits with his character's backstory.