How Avenue Beat's Year Went From Worst to First With 'F2020'

Sam, Savana and Sami check in from Nashville 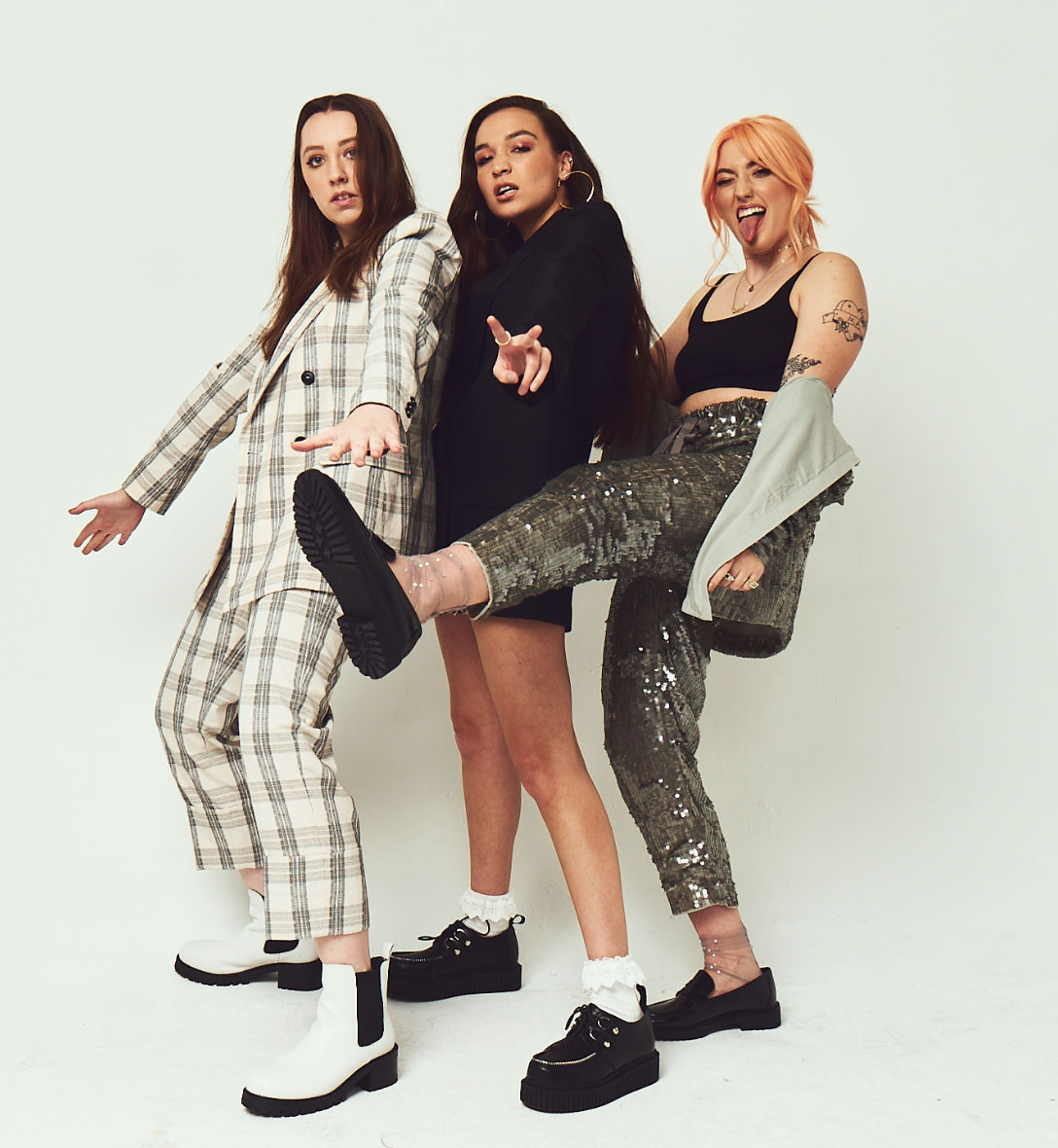 For the Nashville-based band Avenue Beat, the year 2020 completely sucked—until it was completely awesome.

The pop trio of Sam Backoff, Savana Santos and Sami Bearden, originally from Quincy, Illinois, released the deadpan, zeitgeist-busting anthem "F2020" over the summer, all about their horrible year. And it quickly went viral on TikTok—reversing their own personal fortunes in a matter of days, and bringing a measure of joy to all who could relate during the pandemic.

The TikTok video got more than 16 million views. And it earned the trio a ton of new fans, especially after the radio edit started getting airtime.

The band released their first single, "Ruin That for Me," through Big Machine Label Group's Valory Music Co. a few months before "F2020." After their viral hit, they were invited by Spotify to record a "Vote 2020" version as part of the streaming giant's "Play Your Part" campaign around this year's election.

Muse caught up with Sam, Savana and Sami over Zoom to find out how it's been going since "F2020" took off, why TikTok is great for going viral (or not), and what's next for the group in this struggling time for musicians.

Muse: I saw that Susan Rice, the former national security adviser, wrote about your song in the Times. How insane is that?

Sam Backoff: I saw that and was like, "What is Susan Rice doing tweeting about us?!" [laughs]

Sami Bearden: What is this year?

Sam Backoff: That was so cool. I loved it so much. It made me so happy. I literally laughed about it for like 20 minutes.

That must have been your most mainstream media mention yet.

Sami Bearden: Oh definitely. It was so out of left field!

Now you just need Joe Biden to play your song at a campaign event.

Savana Santos: At a rally! Anything. We'll take it!

Everyone's been hating on 2020 since March. Why do you think you were the first to capture it in song?

Sami Bearden: I mean, I don't think we really set out to do anything other than just vent.

Sam Backoff: Get our frustrations out.

Sami Bearden: Yeah. Just vent about how the year affected us personally. And then it just so happened that a lot of people agreed with the sentiment.

Sam Backoff: They felt it.

Sami Bearden: Listen, it would be very cool if years and years and years down the line it was a thing. Because it's definitely a thing this year, but it would be cool if, every time the song comes on, all of these survivors of the year 2020 just look at each other, like, "Yeah."

Tell me about writing the song. Did it come quickly?

Savana Santos: I did the first verse and chorus, and it was literally just me getting up on the microphone and the words falling out. Because all we were doing was complaining about things that had happened to us this year. So it wasn't something you had to sit down and think about writing. I was just like, "Oh, I'm going to complain about this and this and this."

Sam Backoff: It just kind of poured out.

Savana Santos: There were so many things to complain about.

Do you have any favorite lyrics from the song?

Savana Santos: "My cat died." Because Sam's cat actually died! Everyone's like, "Did you just put that in there?" And we're like, "No."

Sam Backoff: Everyone asks me if it's actually true. It's like, "Did the cat actually die?" And I'm like, "Yes. Unfortunately, he did."

Sami Bearden: It was very unfortunate!

TikTok is getting bigger all the time as a platform for breaking new music. Is that why you wanted to put the song on there first?

Sam Backoff: We had the most power on TikTok. We were like, our team's never going to let us put this up [on YouTube], because we swore a gazillion times. And we're like, we're just not going tell anybody and we're just going to put it on TikTok and maybe they'll let us release it if it does well. And then it did!

Sami Bearden: We didn't even think that far ahead. We were just like, oh, this will never see the light of day. Let's put it on TikTok.

That's where it could go viral quickly, though, compared to YouTube these days.

Sami Bearden: Yeah. This is true. There's so much on TikTok that can either go viral or can just disappear into the ether and no one ever sees it again. That's kind of comforting.

You obviously didn't think it would get enormously viral.

Savana Santos: No, absolutely not!

Sam Backoff: We were getting like 6,000 views on our TikToks before that one. We were just assuming it would follow suit with the rest of our flop TikToks!

Sami Bearden: Fun fact, I did have to Google how many views you can get for something to be considered viral.

Savana Santos: What is it?

Sami Bearden: I don't remember. This was months ago. I don't have a brain anymore.

Well, whatever it is, you surpassed it. Do you know what the numbers are now?

The Ocean Spray guy stole a bit of your thunder, though, right?

Sami Bearden: You know what? If we were to lose it to anybody, I'm glad it's that man with his skateboard and his Ocean Spray and his Fleetwood Mac. He deserves it. He deserves it more than us.

The funny thing about this song is how it made 2020 your best year, even though it's about being your worst year. That's pretty ironic.

Savana Santos: It's so ironic.

Sam Backoff: [sings] It's like rain on your wedding day. ... Yeah, I mean, I feel kind of bad, honestly.

Sami Bearden: The worst year other people have, the bigger the song would get.

Sam Backoff: I don't want people to have a bad year! I want them to have a good year!

Sami Bearden: But I also want the streams. [laughs] So, you can understand.

How are you adjusting to your popularity? You're probably doing a lot of these Zoom calls.

Savana Santos: Yeah, but it feels pretty normal because we're still in lockdown in our homes and stuff, which is nice. I don't know if we could handle having to do a whole thing around this right now.

Sami Bearden: It's nice to know that while this is still going on, it's OK, I'm still a loser dealing with the same crap I was dealing with before. Who knows, if the world was there for us to go out into, and party hard, maybe we would have problems, I don't know. I guess we'll never really know! So it's kind of nice. It felt kind of like a soft launch. OK, we can do this from the safety of our own home, but we can wrap our head around it before we really dive in, eventually.

You're in Nashville. What's the scene like there right now?

Sami Bearden: It is a tough time. Downtown is still open, though. I haven't actually driven down Broadway, though, just yet.

Sam Backoff: I drove down it one time and I was mortified.

Sam Backoff: It was terrifying. I rolled my window up.

Are you in touch with other musicians there?

Sami Bearden: Oh, yeah. Everybody's really close-knit here. So it's really just like talking to your friends about, "Oh, my God, remember that time we played that show and we actually felt something?"

Sam Backoff: We're friends with other artists and also other people who just have jobs in the industry. Touring just isn't happening, so everybody's just trying to regroup. It's a weird time.

What's the next step in your career? This must change the equation a little bit.

Sam Backoff: It definitely does. Yeah, we try to not have any expectations. We want to just put out more music, first of all. Because that's really all anyone can do right now, is release new music.

Sami Bearden: Put out new music. Work on ideas for a live show someday, when those happen again. We have so much time to practice, and it's going to be the day before we go out and we're going to be like, "Oh, crap, we have to practice!"

Have you been making new music?

Sam Backoff: Yep. We literally stopped working on a song to get on this call.

How's it going? Do you feel any pressure, now that you've had this hit?

Sami Bearden: A little. It's underlying. It'll pop into your head and you'll be like, "No, go away." I want to have fun while I make this. I don't want to think about that.