"I'm new and improved with a thinner frame.
Chic and bold—that's still the same.
I'm gonna feel so good in your hand and your pocket
I'm premium tech and you know you wanna rock it!"

Do you remember hair-metal band Galactic Lazer Stallion from the 1980s and their hits "Unfold Me" (quoted above), "Sign Your Name Forever" and "Just Can't Lose"?

Of course not. The band and its repertoire weren't actually around in the Reagan years. In fact, they've existed for only a few weeks, developed by Iris Worldwide as part of its "Power Play" campaign to help its sales reps get up to speed on the Samsung Galaxy Z Fold2 and the Galaxy Note20.

"It's training so hardcore, you'll beg for an encore," the press release says, a bold statement backed up by this cheeky Behind the Music-style band intro video:

"When you fly this close to sun, you're bound to get burned. Especially when you use this much hairspray," the narrator says at one point. That line encapsulates the fun, over-the-top vibe of the project, with Iris creating a bigger media footprint for the fake rockers than many real bands enjoy.

"Virtual training allows us to reach a much broader audience—in our case, sales reps across the nation—and it provides a much more comprehensive experience," Samsung regional sales director Lyndsey Williams tells Muse. "Most importantly, the content lives longer as it's all digital. We are bringing the training to our user by way of utilizing the social mediums they use every day."

And since overkill is so '80s, they've even got their own video game (8-bit graphics, of course!)

It's like they turned the content creation volume—and trouser stuffing—up to 12! (BTW, the dudes who recorded the tunes appear as the band—more on them below.)

The project recalls other fake rockers, such as the New York Lottery's Black Titanium and the "Greatest Hates" collection from canned-water-company-that-sounds-like-a-metal-band Liquid Death. Galactic Lazer Stallion falls somewhere between those two grooves. They're more product-focused and coiffed than the former, while less in league with evil than the latter.

Heavy music from a simpler era.

"We wanted to offer our carrier reps a little escape from 2020, back to an era synonymous with being unapologetically self-indulgent," says Iris associate creative director Marcus Liwag. "By tapping into iconic music from that era and by using a band logo featuring a chrome-plated horse that shoots laser beams from its eyeballs, we are able to offer up fun and engaging entertainment."

"From an audio and visual perspective, the '80s—and, in particular, the fashion and music of the hair-metal subgenre—are absolutely iconic. There has never been another musical moment like it, and there probably never will be," Liwag says. "When hair metal was a scene, the guitars were shredding, the drum kits rotated, the hair was too high to clear the door frame, and you didn't just sing along—you shouted along to the songs. It was flamboyant, ridiculous and committed to one thing: a good time. So, if we wanted to provide our audience a brief escape from 2020, there was just no other era that was going to fit the bill."

The target audience is carrier sales representatives—the campaign is about employee experience, which can in turn boost customer experience. "These are the people customers engage with when they walk into a store looking to upgrade or get help with their mobile device," Liwag says. "They need to know the ins and outs of the new Samsung devices and how to present them to their customers on the retail floor. This program in particular was created for Verizon Wireless."

They're with the brand.

The band you see in the music videos is indeed the band that created and recorded the music, led by Atlanta-based musician and songwriter Nicholas Niespodziani, who portrays ultra-glam frontman Jet Janson.

"We started the songwriting process by sharing some initial direction for the theme or concept of the song, along with key features of each device that we needed to hit in the lyrics," Liwag says. "Nick was able to translate that into demos for the original songs, each of which really landed those training points, without losing any of the catchiness we were looking for. When it came time to record the final tracks, Nick recruited some of the musicians and vocalists from his existing band Yacht Rock Revue—and they are legendary in Atlanta—to lay down the tracks in his home studio."

The live gig was shot at the landmark Roxy in Atlanta.

"It was an interesting shoot, as we wanted to minimize people on set, so the primary creative team observed the shoot from a livestream and would send on-set producers feedback via chat," Liwag recalls. "Our production partner was Hey Beautiful Jerk, a creative house part-owned by Gina Niespodziani, Nick's sister. They have experience producing highly stylized content for many chart-topping bands, popular TV shows and broadcast networks. Suffice it to say, they know how to make a killer music video."

Yes, this is what he does for a living.

"As a creative, you have moments in your career when you say to yourself, 'I can't believe this is what I do for a living,' and this project was rife with those moments," he says. "For example, pulling actual glamour shots for visual reference, asking the talent if anyone can do a bicycle kick without pulling a hammie, or an email chain discussing the visual challenges of wardrobing men in leggings."

Here are some brand lyrics, so you can all sing along: 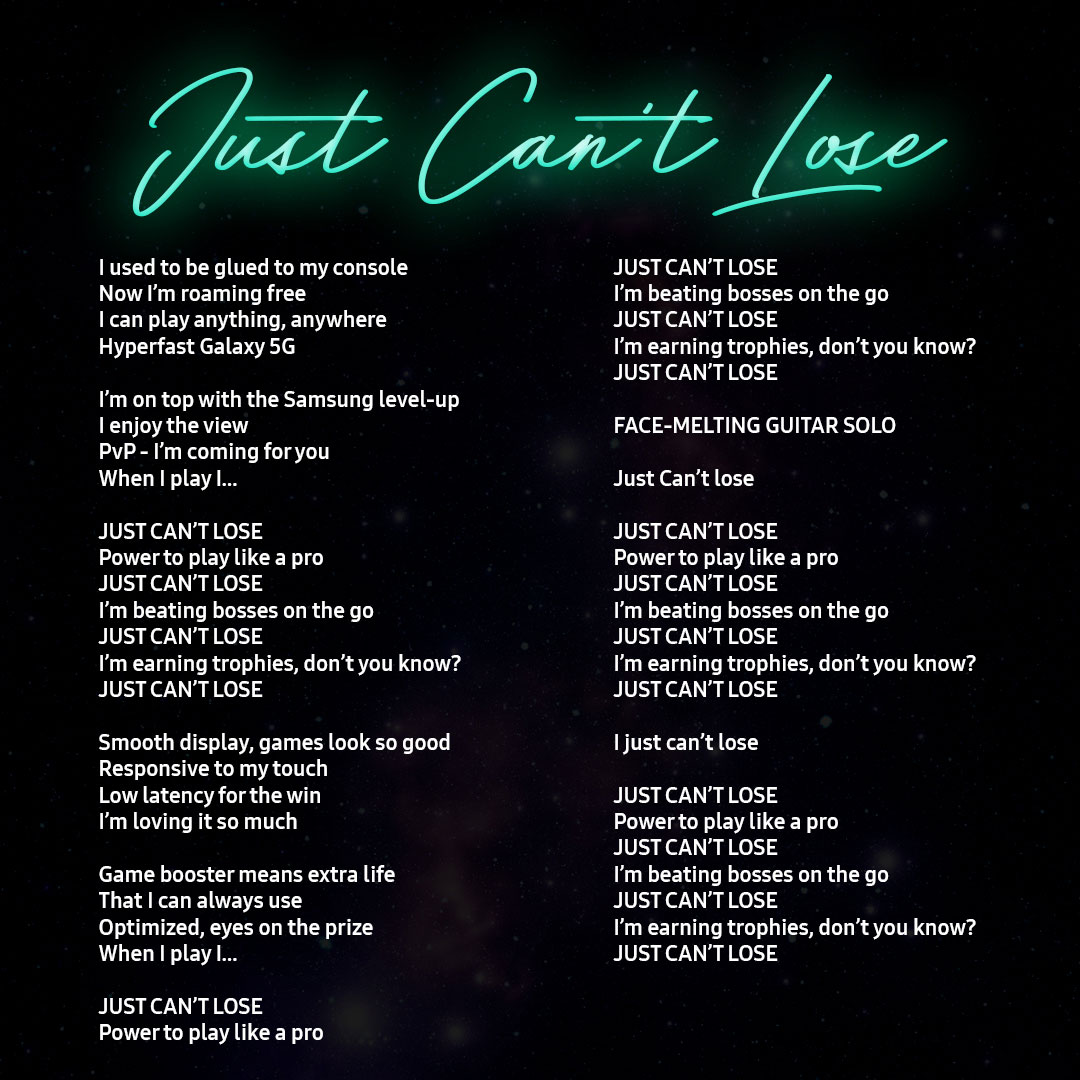 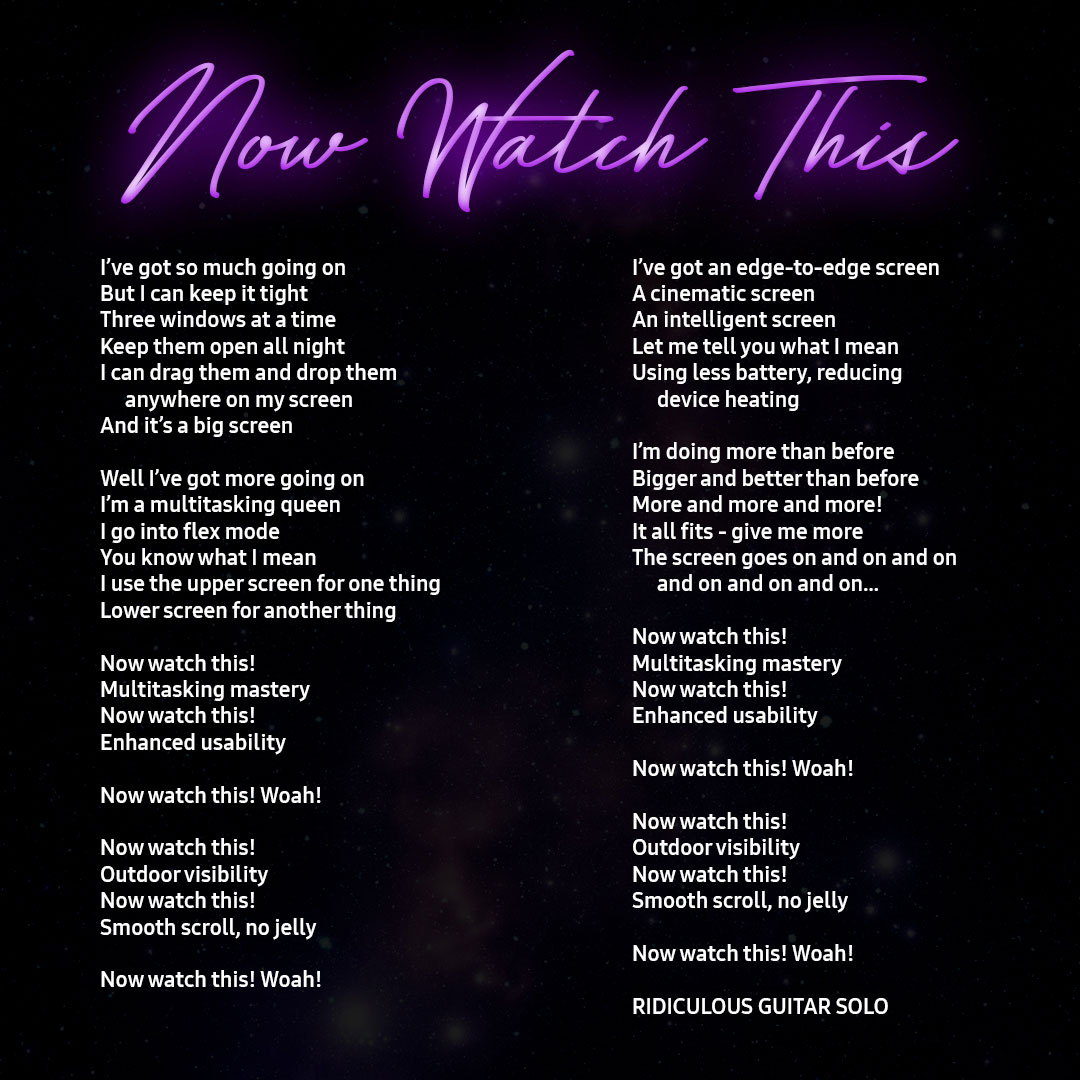 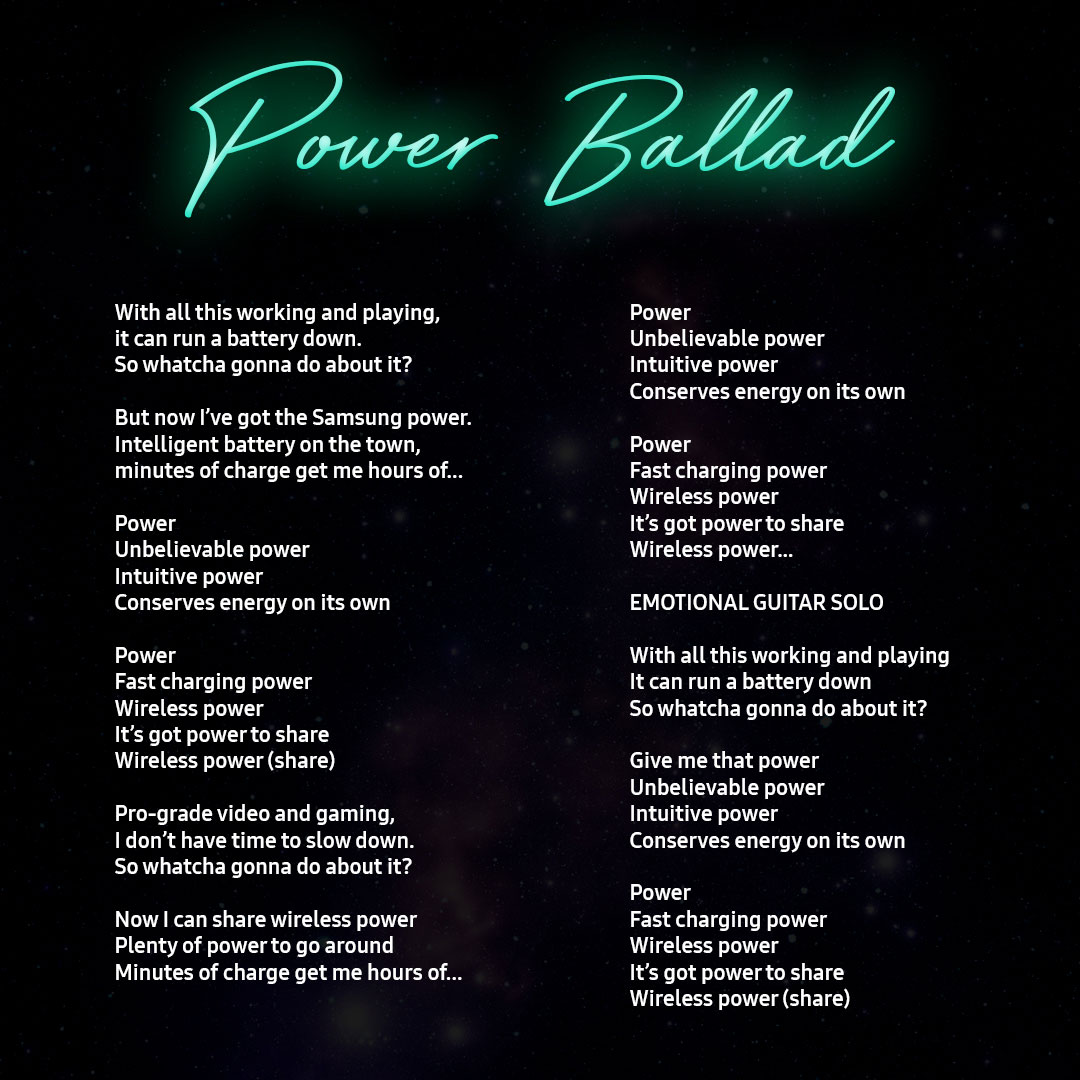 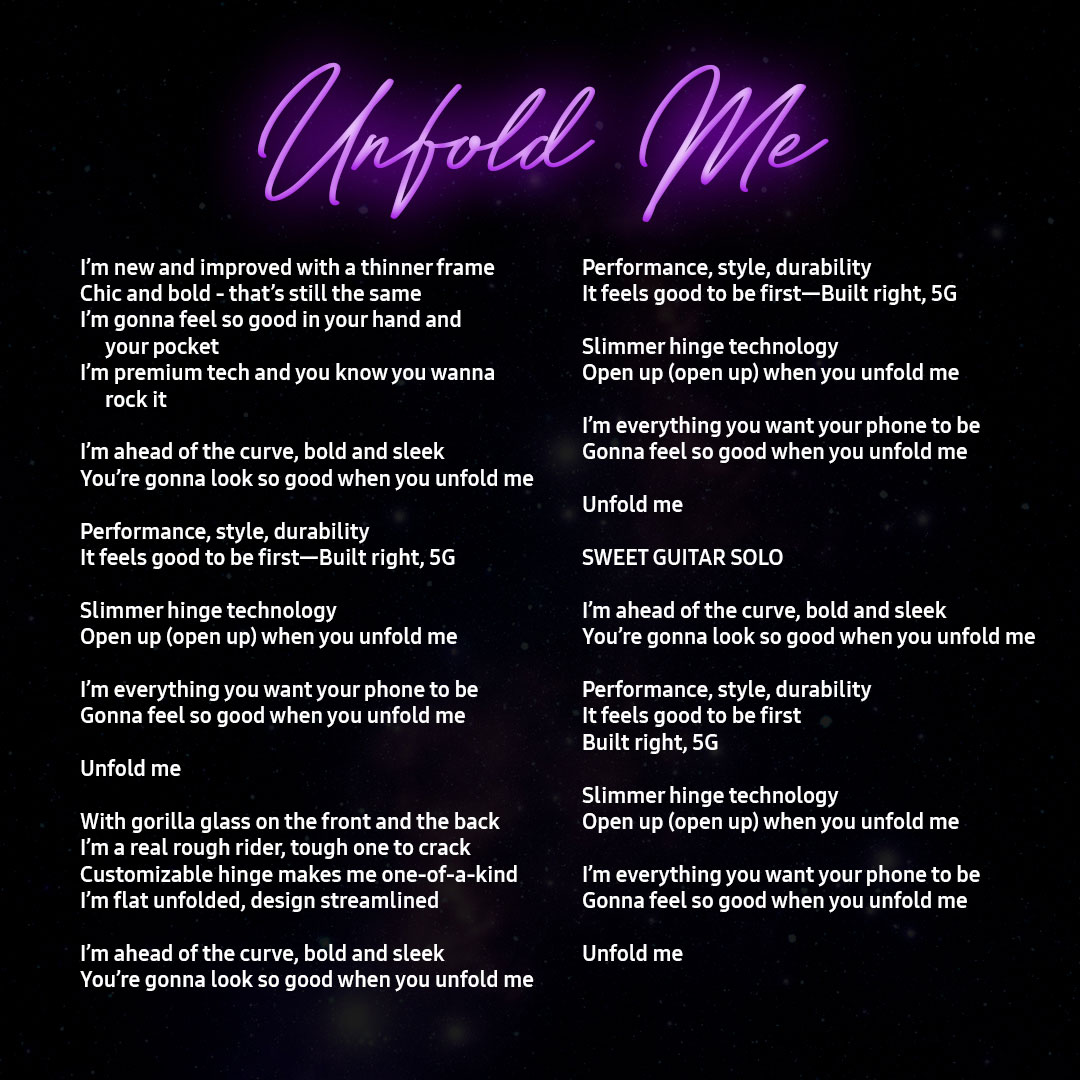