David Lynch and the Surreal Soundscapes of Mulholland Drive

A look at the music choices of an indelible classic

In this new "Music in Film" series, Mike Smaczylo digs into the art and craft of great music supervision, starting with David Lynch's classic of surreal cinema.

Tragic, phantasmagorical, crushingly satirical. Mulholland Drive is many things to many people, but indisputably it sets a towering example of the heights to which a careful attention to music and sound can elevate the art of cinema.

Though he's known best for writing and directing eerie, surreal, darkly comic movies, David Lynch is a dedicated fan of music from the '50s and '60s, owns a music publishing company, Bobkind Music Ltd., and is a musician and songwriter in his own right. He's written, recorded and engineered several albums, including Jocelyn Montgomery's experimental renditions of music by the 12th century visionary mystic and composer Hildegard Von Bingen, and a solo blues rock album that features Swedish singer-songwriter Lykke Li. His longstanding collaboration with the composer Angelo Badalamenti is widely regarded as one of the most singular creative relationships in the film world.

Unsurprisingly, Lynch is as hands-on in the musical direction and sound design of his movies as he is in the film direction, and his catalog is a goldmine for any music fan. But of the lot, Mulholland Drive stands out for me as a moment that, as a teenager, my mind was opened to the possibilities of cinema and the art of great music supervision.

Despite its current status, Mulholland Drive almost never made it off the ground. Originally pitched for the TV network ABC, the original pilot was cut from just over two hours down to 88 minutes to fit with the network's programming schedule. Lynch hated the final edit, and the project was abandoned after it was rejected by ABC. He initially turned down an offer to complete it from a French production company, but after a wave of inspiration and two days of nonstop writing, he came back to them with a script. The movie's sound engineer, John Neff, later called it "my nemesis. The cross on my back. The movie that refuses to die."

Mulholland Drive is a hallucinatory web of illusions and delusions, and a searing indictment of Hollywood behind-the-scenes: its shady deals, shattered dreams, and the film industry's ruthless making and breaking of aspiring female actors. A fitting coincidence, then, that it ran into difficulties with industry politics—or some argue it's more than that… 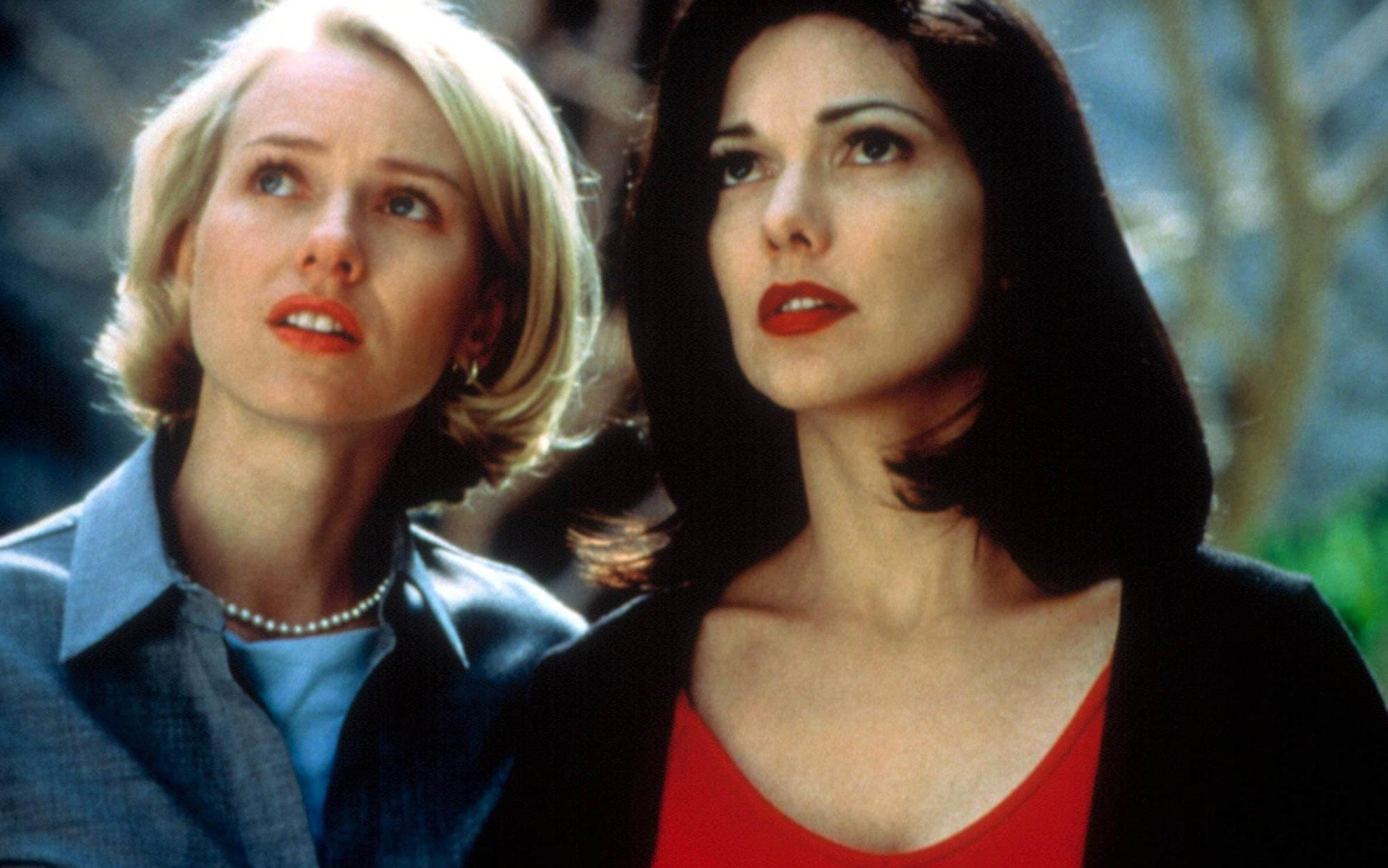 The plot centers around the meeting of two young women: Betty, a naive and ambitious actor, newly arrived in L.A. after winning a jive competition in Canada; and a mysterious amnesiac, concussed from a car crash that narrowly saved her from an attempted murder, who calls herself Rita after spotting a poster of Rita Hayworth in Gilda. A star of Hollywood's Golden Age in the '40s, Hayworth suffered a tragic and highly publicized demise amidst drinking problems that obscured what much later was revealed to be undiagnosed Alzheimer's. The film soon takes us down a rabbit hole of sleazy casting calls, adultery, mafia plots and botched hit jobs.

The film opens with a rose-tinted recollection of Betty's jitterbug contest victory, with an original track composed by Angelo Badalamenti.

While he's best known for droning, suspenseful synth and orchestral pieces like "Laura Palmer's Theme" in Twin Peaks and the title theme for Mulholland Drive, Badalamenti is no stranger to writing moody jazz numbers for Lynch's movies. In an interview with Film Score, prior to Mulholland Drive's release, he said "the whole opening is like a '40s big-band swing thing, but it isn't done like 'In the Mood.' It's recorded in an abstract way. So you don't know what the heck's going on, even though the rhythm's got this Glen Miller feeling to it." 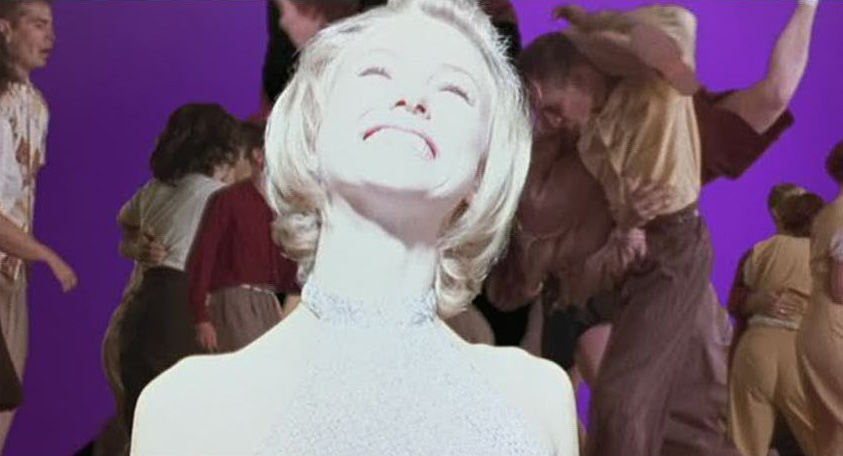 Badalamenti first met David Lynch in the mid-'80s on the set of Blue Velvet, while coaching Isabella Rossellini on her vocals for the club scene. He was asked by the production company to compose an alternative to This Mortal Coil's cover of Tim Buckley's "Song to the Siren," which the director dearly wanted for a scene (and later used extensively in Lost Highway) but which bore a $75,000 sync fee. Badalamenti asked Lynch to write the title and a few lines and recounts receiving a piece of yellow paper with the title, "Mysteries of Love."

He says, "I read it through. There was no rhyme scheme or hook to latch on to like songs were supposed to have … But I did the smart thing that any streetwise kid from Brooklyn would do. I called him and said, 'David, what a great lyric!' Then I followed it up by asking David what kind of music he wanted. He said, "Oh, just make it like the wind, Angelo. It should be a song that floats on the sea of time. Make it cosmic!"'

"Mysteries of Love," of course, became an iconic fixture in the movie.

Much of Badalamenti's score for Mulholland Drive consists of ominous droning synth and string pieces, recorded with the Prague Symphony Orchestra, which underpin the unsettling cinematography and help constitute the hallucinogenic world of the film, and which Lynch reworks and blends with abstract sound design.

John Neff, who met Lynch while designing a recording studio for him and stayed on as a regular sound engineer after the studio turned out to be so complex and idiosyncratic that it would have proved a freelancer's nightmare, said in an interview: "David of course is very hands-on in the sound department. He is the sound designer for the movie. He conceptualizes things and says, 'I need it to sound like a 30-ton piece of metal being scraped across a polished piece of smooth granite.' Well, you have to imagine in your mind how that's gonna sound, then you have to go make it out of things that exist in the everyday real world. But he directs, he's an act and react guy. You come up with something you think might get you started on that path and then he goes, 'OK, no, it's gotta be lower, it's gotta be slower, it's gotta have this, more reverb.' So he directs the creation of the sound like he directs the picture." 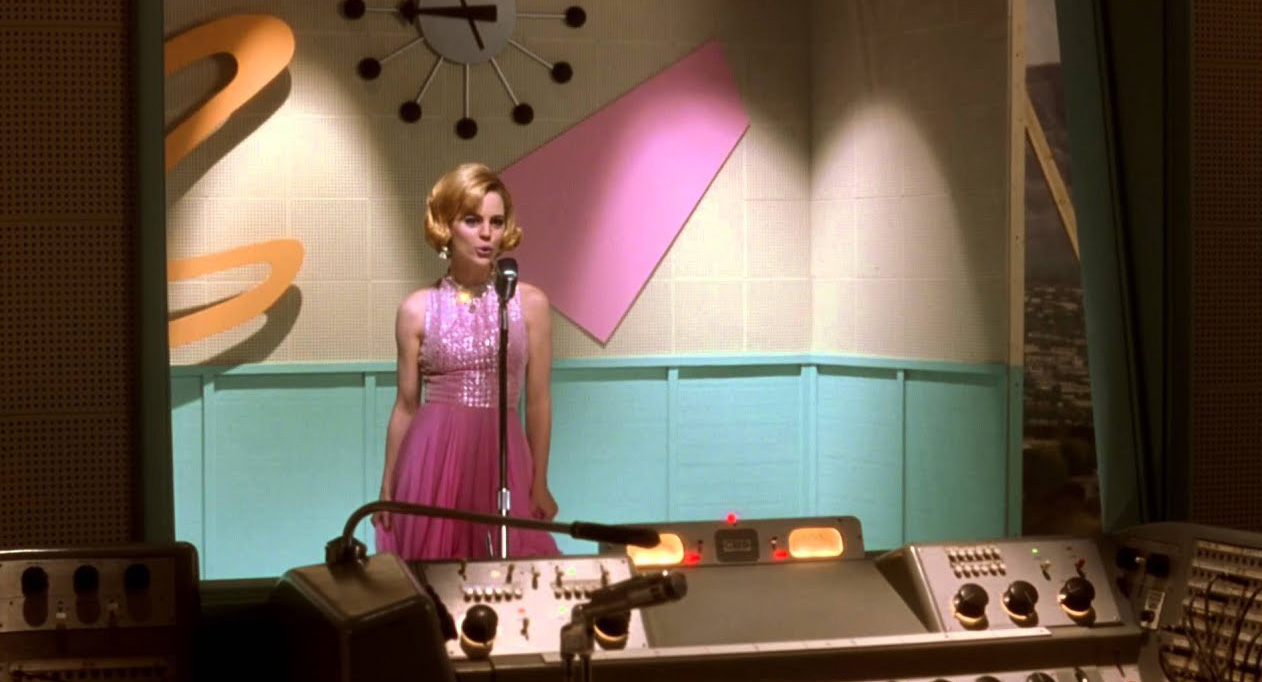 Some of the most striking moments in the film, however, come from the placement of commercial music, chosen by Lynch and licensed by Tanja Crouch, music supervisor and former vice president of Roy Orbison Enterprises. Two scenes that take place at the house of Adam Kesher, a director whose movie has been shut down after a disagreement with the mafia, break the ominous mood with moments of genuine comedy underpinned by old blues records.

In the first, Adam arrives home to the sound of Milt Buckner's "The Beast," from the 1956 album Rockin' Hammond, and finds a van with a homemade logo reading "Gene Clean." He enters the house to find the eponymous Gene, a pool cleaner, in bed with his wife Lorraine, who castigates him, saying, "Now you've done it. What are you even doing here?!" Adam responds by pouring a tub of neon-fuchsia paint into her jewelry box and is promptly punched in the face and thrown out the house by Gene.

The scales are balanced a few scenes later, when an enormous gangster arrives at the house looking for Adam. This time, Sonny Boy Williamson's 1965 song "Bring It on Home" plays as the huge-fisted mafioso nonchalantly knocks Gene out cold, before swatting Lorraine off his shoulders like a fly from his lapels. A casting scene for Adam's film opens with an actress dressed as a '60s pop star in a recording booth, miming along to Connie Stevens' 1960 chart hit "Sixteen Reasons." In a strangely unsettling moment, the following auditionee uses Linda Scott's sugary sweet "I've Told Every Little Star," while a mob boss, played with astounding menace by Angelo Badalamenti himself, appears behind Adam's director's chair.

Badalamenti once said, "Sometimes music that works against the action of those emotions can be the best kind … That's another kind of drama in a suspenseful situation. So I really love music that goes against what you're seeing visually." This technique runs as a theme, not only in his compositions but in the wider uses of sound and music throughout David Lynch's filmography.

Other moments put a moody contemporary twist on the sounds of these earlier records, with three tracks from an experimental rock 'n' roll album released by Lynch and Jeff Neff, as BlueBob, appearing in the movie. Perhaps its crowning moment, though, and a pivotal scene in the narrative, comes at the mysterious Club Silencio, which Betty and Rita visit after Rita wakes from a nightmare, to Betty's surprise, speaking fluently in Spanish.

Inside, a magician repeats the words "no ay banda"—there is no orchestra. He explains that the show is an illusion, it's all pre-recorded. But explaining the trick doesn't break the magic, when Rebekah Del Rio takes the stage and delivers a hauntingly tragic Spanish rendition of Roy Orbison's "Crying" ("Llorando").

According to Jeff Neff, Del Rio came to Lynch's studio in late 1998 after a recommendation from her agent and, when asked to sing something, recorded "Llorando" there and then in a single take. Lynch wrote her into the film based on that. The Club Silencio scene is an unforgettable moment in this already unforgettable film, and his choice to make this song its centerpiece just goes to show the importance of music in his artistic practice.

In our new isolated existence, many of us are finding solace and enjoyment in music and film. And whether you're new to David Lynch or already a committed fan, Mulholland Drive offers new perspectives of the relationship between the two on every watch.