Inside the Daring Score of the 1988 Anime Masterpiece Akira

As end-times narratives go, Akira's is a little more dramatic than the dreary slide into reactionary politics, social isolation and pandemic mismanagement that has characterized our experiences in the Western world in recent times.

First created in its manga form by Katsuhiro Otomo in 1982, this story of a post-apocalyptic neo-Tokyo, rebuilt in the wake of a third world war that began due to the destruction of the city by a child called Akira with superpowers beyond comprehension and control, perhaps could have sprung only from the national consciousness of a country that, 37 years earlier, had experienced the full power of the atom bomb, twice in a matter of days. And yet, a 4K remaster of the 1988 anime movie last month returned to cinemas across the U.S. and U.K.

With themes of political corruption, widespread public unrest, and a Tokyo Olympics Organizing Committee determined to go ahead in dubiously safe circumstances, Otomo's vision of 2019—the year in which the story takes place—clearly resonates with audiences today. With wealth inequality at an all-time high, public services decimated and governments too wrapped up in petty, self-serving concerns to adequately deal with a global health crisis and the unfathomable existential threat of climate change, it has arguably never so closely reflected the world we live in.

Despite its enduring appeal, Akira was maverick in 1980s Japan, sharing more in common with the dystopian visions and cyberpunk aesthetic of American contemporaries like Blade Runner and William Gibson's Neuromancer than with its fellow manga. Running from 1952 to 1968, Osamu Tezuka's Tetsuwan Atomu, also known as Astro Boy, had set a precedent for futurist imaginings within the genre—set in a world in which humans and robots coexist peacefully and prosperously, it follows a powerful android boy in his battles against criminals, aberrant robots, and at one point the U.S. Air Force. Where Tetsuwan Atomu's moral worldview is dualistic and its idea of the future positive, its villains evil outliers against a generally utopian setting, Akira's is messy, anarchic and bleak. Its central characters are a teenage biker gang who become embroiled in the shady activities of a secret military program when one of their number, Tetsuo, comes into contact with a mysterious child with telekinetic powers, who has escaped from a lab, unlocking latent powers on the scale of Akira's in himself.

Technology in Otomo's creation is to be feared. In the hands of corrupt and irresponsible political elites, its capacity for destruction is limitless. Born in 1954, Otomo was a teenager at the time of the 1968-69 student uprising at Tokyo University, and moved to the capital to pursue his career as a manga artist only a few years later. The general manager of Kodansha USA Publishing, Naho Yamada, says, "Otomo jacked into his generation's frustration with society, in the wake of the defeat of Japan's liberal student movement, and created an epic that, in true Japanese fashion, processed societal trauma through cataclysmic visual symbolism." Running for eight years and filling six phone-book sized volumes, Akira changed the face of manga, stylistically and thematically, and in 1988 was exported to America in colorized form, paving the way for manga's immense popularity today. 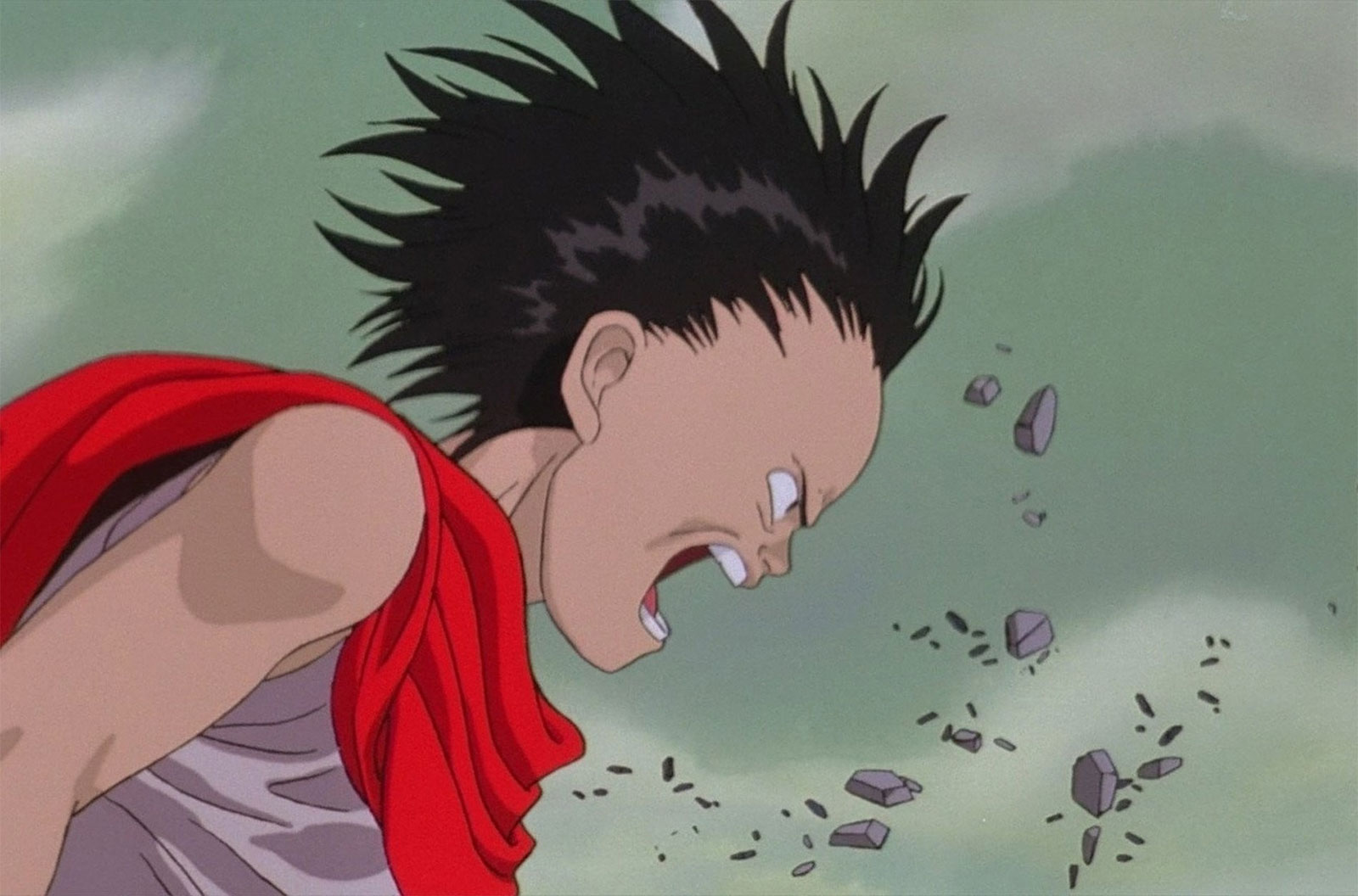 That same year, the feature-length anime ("animated") adaptation would once again break definitively with convention. Japan in the late '80s was in the midst of an economic boom. Its comparative wealth was at the time so great that it was viewed by many in the West as an economic rival and possible threat to U.S. hegemony, much as China is now. The manga publisher Kodansha, distributor Toho and anime studio TMS formed the Akira committee, coming together to grant the Akira movie a budget of ¥1 billion, the biggest ever given to an anime production to date.

The stylized, non-realistic look that has tended to characterize Japanese anime, which again traces back to Astro Boy and the work of Osamu Tezuka, was initially at least a creative response to the inability of Japanese animation studios to compete financially with American firms like Disney. Animators use the terms "1s," "2s" and "3s" to refer to the number of frames for which an image is held. Using one image per frame gives the smoothest effect, but requires twice as many images as working in 2s. Most anime at this point had worked for the most part in 2s or higher. Unrestrained by financial concerns and given complete creative freedom by the Akira Committee, Otomo hired 68 of the most talented illustrators in the anime industry, and set to work crafting 160,000 frames of jaw-droppingly intricate illustrations, each one painted by hand.

Crowded and chaotic, with a hint of neo-noir, Akira's cyberpunk cityscapes have had a profound impact on film, influencing The Matrix, Inception and Stranger Things, among countless other productions, being referenced in the music videos for Janet and Michael Jackson's "Scream" and Kanye West's "Stronger," and arguably kickstarting the anime craze in the U.K. Matching the animation in both daring and influence, though, is Akira's original score, vinyl copies of which, until being reissued in 2017, were a rare collectors' item commanding prices of over $800 in second-hand markets.

The score was composed by Geinoh Yamashirogumi, the maverick music collective headed up by molecular biologist Tsutomi Ōhashi, known by his pseudonym Shoji Yamashiro. Founded in 1974, the collective is composed of hundreds of members from various professions and walks of life. According to its website, Geinoh Yamashirogumi is "an experimental group that seeks and verifies the original lifestyle of humankind promised by genetic DNA" before being a performing arts group, and is a base for "criticism of civilization that acts." Learning from the wisdom of the traditional community, and eliminating specialization and single functioning, the steady and sincere "group creation" and "person creation" is the true value of the multi-performance community Yamashirogumi.

Known previously for faithful renderings of folk styles from around the world, the group broke new ground with their 1986 album Ecophony Rinne, a piece in four movements structured around the cycle of birth, death and rebirth, which fused percussion from Japan and Tibet with Noh music, Balinese gamelan, and midi synthesizers to form ethereal and expansive sound that seems too large to fit within categories like new age or "4th world." Geinoh Yamashirogumi remain obscure, in spite of the success of Akira, but with this album their contribution to the development of electronic music was substantial.

In the '80s, synthesizers weren't capable of replicating the tunings of gamelan music, which doesn't follow the tempered tuning of Western scales and thus involves microtonal inflections that weren't built into the synths of the time. Gamelan tunings don't follow scales attached to specific notes, but instead divide into two tuning systems that operate as guidelines for the dispersal of intervals within an octave: the slendro system, which includes five notes of roughly equal intervals to the octave and may sound to Western ears like an out-of-tune pentatonic scale, and the pelog system, which includes seven notes to the octave, with variable intervals between. The group learned to reprogram the synths so they could account for this complexity, a development that by 1988 had been incorporated into the Roland D-50 and Yamaha DX7-II, both of which feature in the Akira soundtrack.

On hearing Ecophony Rinne, Otomo enlisted Geinoh Yamashirogumi long before the illustration had even begun. In a rare act of creative daring, he entrusted the movie's "sonic architecture" to Yamashiro, giving him complete freedom to dictate its pace and mood, with only the words "festival" and "requiem" by way of a brief. The visual elements were later built around the music. In an interview at the time, Yamashiro said, "All I did was go all out and write totally self-complacent music that I wanted to hear, other people be damned … I feel like I've been swinging away with a sword with my eyes closed. It feels like I cut clean through something. But I still don't know if I hit what I was supposed to, or if I just sliced my own leg open."

The result was a grand fusion of East Asian folk musics, symphonic choral works like Bach's Mass in B Minor, Beethoven's Ode to Joy, and Shostakovich's Song of the Forests, and percussive electronic passages that wouldn't feel out of place among some of the more explicitly globally oriented "one-world" factions of the early '90s U.K. rave scene. Indeed, Akira samples crop up all over '90s dance music, from rave duo Underworld, whose own commercial success was due to another moment of cultural cross-pollination with cinema in the appearance of their tracks "Dark & Long (Dark Train Mix)" and "Born Slippy.NUXX" in Danny Boyle's Trainspotting, to the German hard trance duo Sunbeam.

In Akira's opening sequence, a technical masterpiece of animation, the protagonists battle a rival biker gang while racing through the city, injuring civilians and causing chaos and destruction along the way. Before mounting his bike, Kaneda, the movie's hero of sorts, selects a CD in the jukebox of a bar he's been waiting at, triggering the first entry point of Geinoh Yamashirogumi's music. The track, also called "Kaneda," is a blistering polyrhythmic workout, juxtaposing the Balinese jegog, a tuned percussion instrument constructed from a number of bamboo trunks, with reverberating drum machine claps and snares.

As the gangs finally clash, the next track begins. "Battle Against Clown" is yet another rolling polyrhythmic beast, but this time including urgent and intense aspirated vocals, reminiscent of Goblin's nagging, discomfiting theme from Suspiria. Another profoundly unsettling use of vocals comes in the track "Doll's Polyphony," which amplifies the tension of a disturbing scene in which Tetsuo hallucinates animated dolls climbing onto his bed and growing to terrifying proportions, by sequencing disembodied and fragmented children's voices into a nursery rhyme of sinisterly stochastic interweaving melodies.

At the climax of the film, the 14-minute epic "Requiem" carries us through several movements and a full spectrum of intensity. After heralding itself with drawn-out, ritualistic drum crashes, synthetic toms and snare washed out in cavernous reverb, all accompaniment ceases, leaving a wraithlike choir to grind through a funereal dirge. This in turn gives way to a church organ, playing wistfully at first but soon notching up to a fever pitch, before carrying us gently back to the mournful dirge. The film closes with a variation on Kaneda's theme, with which we began.

While Akira is, of course, best known for its unprecedented impact on animation, in Japan and across the globe, and on the aesthetics of science fiction more widely, it is also a movie built quite deliberately upon musical foundations. The rhythm and pace of the animation, terms of course borrowed from the realms of music, its flows of energy and dynamic variation, are directed by the shifting movements of the score. A masterclass in so many ways, it is also a reminder of the immense affective power that can be generated by the marriage of music and visuals, crafted together in symbiosis.

Mike Smaczylo is a producer and music supervisor at Adelphoi Music.