From the Wayback to the United Nations

CANNES, France—It's been a tumultuous few years for Grey London. But after the latest round of management changes, Vicki Maguire is excited for what the future holds.

More than a year after her co-CCO Caroline Pay decamped for Los Angeles and a job with Headspace, Maguire is forging ahead—welcoming new clients, mentoring what she calls her "kids" in the agency, and as ever, calling B.S. whenever the industry gets full of itself.

Muse caught up with Vicki at Cannes to hear about the latest from Grey London and the vibe at the U.K. agencies generally. 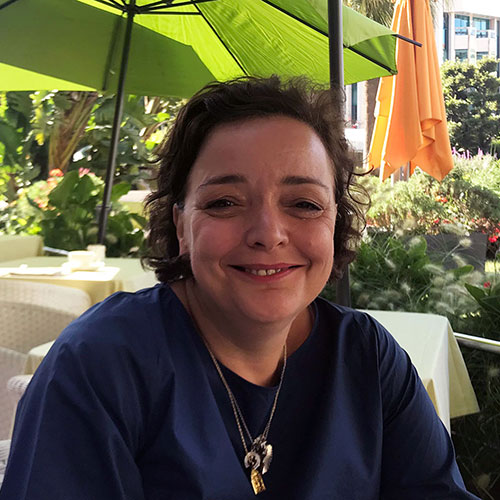 Which Grey London projects are you proud of lately?

There's a VR project that started as a passion project for two of our creatives. Dan Cole's father was diagnosed with Alzheimer's and dementia and went down really, really quickly. Every time he saw Dan, even though Dan is like 6-foot-2 and balding, his father would talk to him like it was 1978 and he was going to school. He'd tell him off for not wearing his uniform and doing his homework. But his father was in a happy place there.

Dan would come in, and he'd be really upset. And they started a VR project called The Wayback, which is basically remembrance therapy. They crowdfunded about £35,000 to get this film up and running. Then Grey London got involved properly, officially. They've set up this company, a nonprofit called The Wayback, where they make VR films of moments in culture that will resonate with the 70-plus audience. The Jubilee. They've just done 1966, the last time England won a World Cup. They've done the moon landing. All in VR.

They use those Google cardboard headsets that you run it on your phone. They've just taken delivery of another 15,000 headsets—30,000 are in care homes around the U.K. You look at the tech and you're like, "Oh my God, this is amazing" But when you go with them into the homes and you listen to these people, and you see them go back—it is massive. I love that.

You've also been doing great work for the UN.

There's a global population who are young and are getting active, but they don't feel their voice is heard. The UN feels so remote and so men-in-suit-y that the younger generation, Gens Z, are totally disengaged with them. And the UN are like, "How are we going to get relevant?"

So we put a People's Seat in the UN. We treated this vocal social presence as a physical person. We asked, "What matters to you most in the world?" And it was climate change. We got about 14 million tweets, stories and responses. We dived into all of these stories and we realized climate change will be the message from our People's Seat. We need a person, one voice, to channel all of this stuff together. And that was David Attenborough. Because nobody trusts anybody else. Richard can't be bought.

We mined millions of emails, tweets and posts, and we constructed his speech out of all of those things. It's gone ridiculously well. So now they want to do it again. What's the next seat? It's food overconsumption. We're looking for a spokesperson for that. It's not Richard. But it's really difficult to find people that haven't sold out and can't be bought. So that's next year's project.

Grey London has been in flux lately in terms of management. How's that going?

We're going through a massive period of change again. We've got a new CEO [Anna Panczyk]. We've got a new creative chairman [Adrian Rossi]. We've got a new European CEO [Eduardo Maruri]. So we've got all new people, which can be very, very destabilizing. Or it can be like, "Right, cut all the old ties, let's go." And that's how it feels. They've all got something to prove.

So it's a good energy.

A really good energy. And Eduardo—he's charismatic, but there's no bullshit. That's really, really rare. It's amazing. So, yeah, the energy's good. Everybody is pointed in the right direction, and we know we've got some big shit to sort out.

How do you think the next few years look for the industry?

If you'd asked me this time last year, I'd have gone, "We've got to stop hunkering down and holding on to the remains of what we have got. We need to let it go, and we need to have a look [forward]." In the U.K., especially. It's so weird when, thanks to things like ad blocking, advertising has become a tax on the poor. People are being made to sit through our products until they get to what they want. But there was a shift late last year where a lot of people just went, "Right, OK, fuck this shit. We're going at it." And when your back is to the wall, the only place you can come is out.

So with the likes of Mother, and even adam&eve again, on their game, turning out interesting, entertaining pieces of comms that people are saying are really brave—it's not brave. It's the only that you can possibly do. There's a nice energy. There's a swagger, which is really nice. And you can feel that energy. It felt dead last year. It was a bit like, "Oh, mate." But now there's a good swagger about it.

Any particular pieces or campaigns that represent that?

I think the KFC work coming out of Mother. That apology. That was brilliant. Everyone's like, "Oh, it's really, really brave." It's not. Every company that fucks up runs an announcement piece, and it's usually like page 32 of the Daily Express. Three black edges and solid type. They came out swinging. The way they talk to their audience, it's just amazing. I love that. Work solves everything. When you see a piece of comms like that, everybody's game gets a little sharper. We just need more of that.

I love Mother, and I love adam&eve. And there's loads of little agencies that I've got so much heart for. And when they do good—10 years ago you'd put your chair out when they were going to collect the awards. There was that male toxicity around anybody doing good. Now you're like, "This is amazing, good on them." We've all got this little thing, this love-in, which is great.