CANNES, France—A year after the short film Corazón for Montefiore won top prizes at a number of advertising shows, JohnXHannes is taking its Expensify campaign on the awards circuit, with great results so far.

The New York agency, led by John McKelvey and Hannes Ciatti, won five Lions here in Cannes on Tuesday for Expensify's Super Bowl work, which included the world's first expensable music video on YouTube. They picked up two golds (in Film Craft and Entertainment Lions for Music) as well as a silver (in Digital Craft) and two bronzes (in the regular Entertainment Lions).

Muse, who spoke at length with McKelvey and Ciatti last year about Corazón, caught up with them again Tuesday at a cafe near the Palais. We spoke about the Expensify campaign, their upcoming foray into the gaming world with Apex Legends, and their admiration for the New York Times work being done at their old agency Droga5. 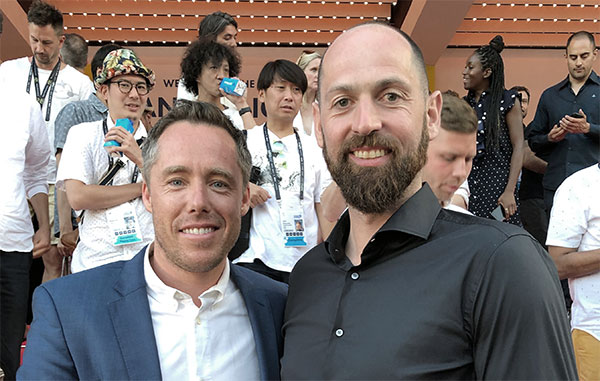 How did the Expensify relationship come about?

John McKelvey: They came to us for a Super Bowl spot, but they really needed an entire marketing program. We did everything from a brand redesign, new photography, new look and feel, new site. We gave them as a strategy, a brand position, a new tagline they can use for the next decade. And then we built, off the back of that, the creative campaign, which was the Super Bowl. Their new purpose is, "You weren't born to do expenses." Then we flowed that into the world's first expensable music video. There was a whole process to that.

Hannes Ciatti: It was an interesting one. They have done really well in the last eight to 10 years with a really good product. They've never done any marketing apart from one billboard they did like three years ago in a motorway. So taking something that is a good product and making it a brand—it was actually really amazing working with them.

A tech company from Portland doing a music video with 2 Chainz—it's very unique. We knew if we were going to do a hip-hop music video that we need an insider's perspective. We can't go into that music world with four white people and a white tech company. So we engaged SNL writers to write with us on it. They did, like, "Friendos" and "Come Back, Barack." Really famous music videos lately with Childish Gambino and other musicians. So we engaged them with the lyrics. We have Mustard, who is a famous music producer from Atlanta, who works with 2 Chainz and Jay Z and others. And then we had 2 Chainz, as well. And we created this writer's room where started to write the lyrics with them.

We gave them the basis of the idea. We never showed them our lyrics. Culturally, you have to be really sensitive, especially around the Super Bowl—we knew there was some backlash around Maroon 5 being on the Super Bowl as well. So we knew we needed a star from Atlanta. We need to do it in a proper way that resonates in culture. And then when we launched it on YouTube, it really hit the spot—the views and the comments. People thought it was a legit like 2 Chainz song, which was exciting. We put it also on his Vevo channel on YouTube. And he launched his album around the same time. So we used his energy and his momentum at the Super Bowl—it was a mutually beneficial partnership with the energy around his album and our launch as well. It was like pretty well synched up.

John McKelvey: Brands genuinely want to be part of culture, but it's quite hard to pull that off and not just pay for it. So it was good to see the response people have had to the song and the music video and the whole project. It genuinely became like the No. 1 trending hip-hop song that had its own momentum. It wasn't an ad that people liked, it was a great song. And it's such a different conversation when it gets to that level.

And then you got a music video director to work on it.

Hannes Ciatti: Andreas Nilsson—who had done music videos before with 2 Chainz and Kanye. He came on board really early. He was like, "Well, first of all, we need lyrics." We knew that as well, but he was like, "We can't do this music video without having a really good base under it." And it's hard, often, to connect with hip-hop artists. We needed writers that work with 2 Chainz. They can be in touch with him. That was a key element. And it all led to doing a second music video as well. The No. 1 track on his new album, we included Expensify as well, with Lil Wayne in there and other artists.

There's parallels to Corazón—this model of bringing in experts.

John McKelvey: Yeah, exactly. If you can put together a bespoke team for that project, not only do you get the skills you want, but you create a different click and a vibe with the talent, too. We're not forcing our one same team on every different project. It's always about, what's the right combination of people for each thing? And I think you just get it a nice of flow with people, too. It feels less like advertising, in a good way, less corporate. We can merge and blend the two. It feels like there is momentum now around people trying to do more genuine entertainment stuff with the brands. That's definitely a trend this year. It's not all done well, but it's a big step ahead from only two or three years ago.

Anything you've seen that you liked in that regard?

John McKelvey: I am a huge fan of a documentary called 5B. It's really special film. It's a feature-length documentary, premiered at Sundance. $2.8 million. Johnson and Johnson funded it. Verizon matched it, so the whole thing was paid for from day one. It premiered at Sundance, and now all the profits from it are going back into the charity.

It's a documentary about when HIV first exploded in San Francisco in the early '80s. No one knew what it was, and it was killing people. And some political opportunist grabbed that fear and branded it in a really evil way, and it said it was a "gay flu" that you get from just being near gay people. They couldn't even get some nurses and doctors to look after patients. They were literally dying in hospital beds. And this one ward, 5B, this group of nurses bonded together and said, "We are going to love and look after these people no matter what."

It's a beautiful story, and it's got all of the original people in it who aren't dead. Really, really fascinating. And there's a couple of interesting twists in there. But that was a standout piece, and quite cool by Johnson & Johnson. In the end, they just say they were proud to bring you this, and and that the money from it is going to support the same thing. It was not at all like an ad. It's probably the best example I've seen lately. [Note: 5B, created by UM Studios and Hwy 61 Films, won the Grand Prix at the Entertainment Lions here on Tuesday.]

Going back to Expensify, can you talk more broadly about the power of music and what brands get out of that?

Hannes Ciatti: Ever since MTV started in the '80s, music videos have really been on the front foot of youth culture. Visual techniques from amazing directors like Spike Jonze and others. It's a beautiful platform that, just in general, people enjoy. And I think, now that it has moved to YouTube—that's an easy platform where people can enjoy them.

John McKelvey: You can get so many views without any media support, any media dollars. For a relatively reasonable investment, you can get a lot back. The first Expensify video had like 15 million views—that's a lot of money if you're buying those views in a paid commercial sense. And they're not as culturally resonant, because it's paid. But I think if you do them well, and the brand has a credible role, and it doesn't creep anyone out, that's actually a really good value. And the follow-up, when we did Lil Wayne and E-40 and 2 Chainz, that was amazing value for Expensify. That's had the same thing, nearly 15 million views in three months, and that was just for sharing the production costs together. That was extremely reasonable compared to a high commercial run.

Hannes Ciatti: Paying E-40, paying Lil Wayne, paying 2 Chainz—they did it for a small fraction because it was their art, and we naturally had a connection to Andreas, who wanted to work with 2 Chainz. It became an easy way in, for a percentage of what you would have to pay for getting an ad space like that with stars of that profile. What we like is creating mutually beneficial partnerships, and finding a win-win situation for the brand and the artist or the actor or the athlete, and then naturally both of them really want to invest in it.

Any other stuff going that you're excited about?

Hannes Ciatti: We just got EA Games. We're working on Apex Legends. It's a similar game to Fortnite, and it's the fastest-growing thing the world has ever seen—50 million people played it in one month. But the gamers actually played through the game too quickly, so they had to go back and actually make more game. So that's where they are at the moment. But in the meantime, we did a campaign for them that's going to launch in October, for Christmastime.

John McKelvey: It's such a unique community of intense gamers, and you want to go beyond that in a smart way. You've got to be authentic to the core audiences that play it, but also bring in new people. Video games, we're learning a lot about it. They're quite unique entertainment properties to release. There's a whole way you've got to do it that doesn't become cheesy to any of the different audiences.

Hannes Ciatti: They're becoming their own entertainment platform where brands want to be in there as well. Nike just released a shoe within Fortnite—that special Air Jordan that they released. Then Samsung did a partnership with them. And then Twitch, as a streaming platform, are bigger than YouTube now. It's a really interesting space.

John McKelvey: Parents can no longer say, "Don't play video games. You'll end up without getting a job." It's pretty crazy. And you know the crazy thing from a brand point of view? If you make a fantastic movie and everyone sees it, people interact with it for a couple of hours. Ifyou build the best franchise, like a Disney franchise, and you've got a round of content like toys, you might get people interacting with it for double that—four, five hours a year. But video games that are popular, you've got people on them for thousands of hours. I don't necessarily thin that's a good thing, but as far as the opportunities for brands—my God. Just the amount of exposure you get. How into it people are.

What other work have you admired lately?

Hannes Ciatti: It's really well crafted and so true to journalists. That's what makes the idea so strong—you really understand the work that great journalists do, within a short film. It is advertising, but it nearly feels like a mini doc about The New York Times. Though it's the second iteration, I think they crafted it even better this time.