CANNES, France—Within the esports sector, people generally agree that esports is a universe, not a monolith.

The chart below by Nicolas Besombes, an esports academic and France Esports vp, comes to mind, depicting esports as an overwhelming sprawl of genres.

Esports & Competitive Gaming (June 2018).
Esports Games are potentially multiple and varied, and allow very different video game experiences. Here is the latest updated collaborative mapping of all these possibilities, whether the games have a competitive pro or amateur scene. pic.twitter.com/owE0EWpqnG

We also generally agree it's pretty dangerous to talk about esports as if it's a single thing. It leads to tricky generalities, people snapshotting one oft-covered corner of the map to talk about the whole (not unlike saying sports are bad because of bad behavior in football).

Yet when we sell it to the outside world, we do exactly that: Talk like it's a single product.

First come the stats about the wider space.

"The global esports audience is already a phenomenon, projected to reach at least 600 million viewers by next year alone," at which time it's expected to generate $1.2 billion, observed Johanna Faries, head of Call of Duty Esports at Activision Blizzard Esports Leagues, onstage at Cannes Lions today.

Next comes the negging of "traditional sports" in esports' favor.

"Among the 18- to 34-year-old demographic, we're the only ones growing at a 30 percent clip," Daniel Cherry III, the CMO of Activision Blizzard Esports Leagues, said of the Overwatch League, whose median viewing age is 24.

Cherry brandished a chart comparing OWL's stage 1 final week to the NBA or the NFL. 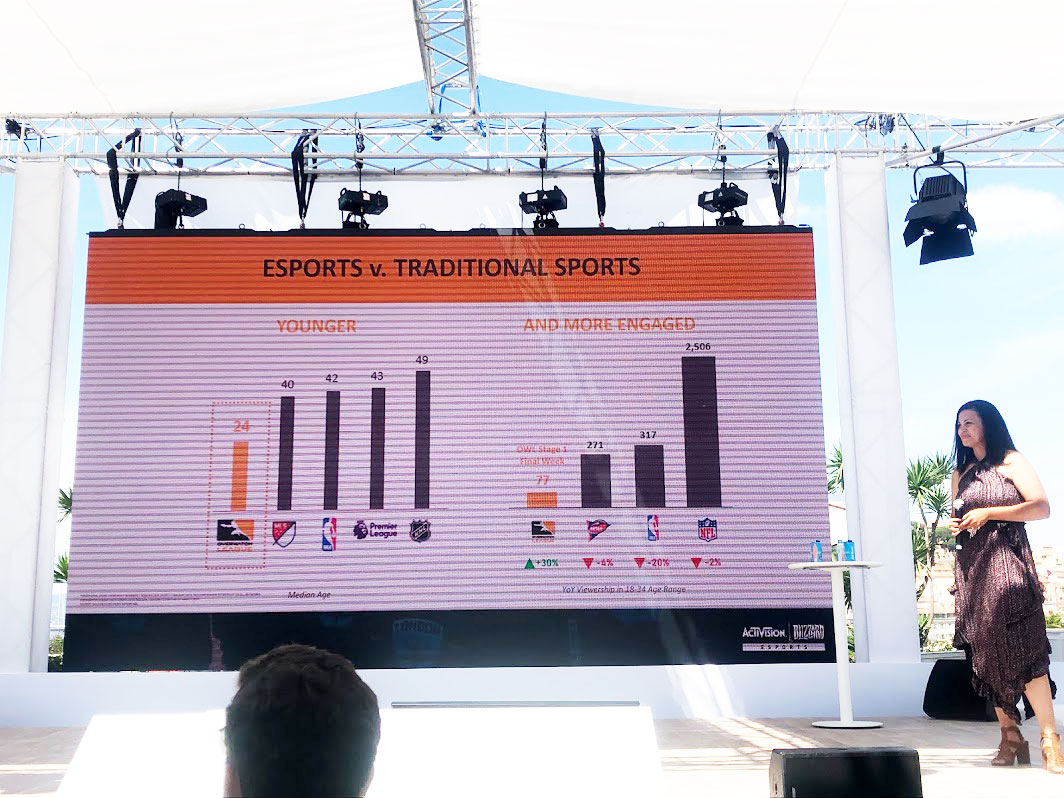 After all this, though, comes a hard sell about what makes esports such a solid investment—its similarity to traditional sports.

Overwatch is a first-person action game, but ignore that; everything else should be familiar to you. "The league is six-on-six. Each person has their role," Cherry said, likening it to how you've got fixed positions in, say, hockey or football—quarterback, wide receiver.

Overwatch also went out of its way to create an esport that looks more like traditional sports than anything else: It imposed the concept of city-based teams. "We're building a city-based opportunity, creating more on-ramps to fandom," he explained.

Esports are by nature international and digital, unconstrained by space, which has made city-based teams an unnatural implant. Fans of games like League of Legends or CS:GO might be loyal to a single player or team—but what does it mean, in esports, to root for a city?

Players move around, and teams are even more ambiguous. Team Liquid, one of the better-known esports teams on American soil, is both Dutch and American, with different members playing across different games, with gaming houses in different places, making a city claim not only tricky but utterly irrelevant.

Overwatch League, which launched in 2016, actively sought to remold these behaviors into something more … well, sportsy. In its session at Cannes last year, then-OWL commissioner Nate Nanzer—now head of competitive at Epic Games, the creators of Fortnite—claimed this change was for fans.

"That city-based anchor is something we've seen catch on quickly," Nanzer said. "It's given millions of gamers a reason to care … if they've been on the periphery of esports but never engaged. 'Holy shit—you guys have a New York team, and there's Boston, so I know who to hate!' Those rivalries are built in, and it's caught on."

Speaking of fans, this year's OWL tagline is "The best of us." Per Cherry, this is about "thinking about the whole ecosystem of fandom."

OWL's athletes, he specified—marking a conscious shift from the more commonly used "pro gamers"—are the top 200 players out of 40-plus million. The business is diversity driven, with a 50 percent female/male ratio and almost half of the people from Africa, Asia and South America.

In the case of diversity, we assume he's referring to OWL employees specifically: Last year, Nanzer told us OWL's operators are about 45 percent female, so it would make sense for Cherry to share an update of that stat. (Overwatch does overindex in terms of woman users, but in 2017 it represented 16 percent, not half.)

"It's important to have diversity of geography, gender and access," Cherry said. He pointed us to the game's cover character, Tracer, "a hero who's openly gay. That's essentially our Michael Jordan. So when you want to play the best of the best, you aspire to be a woman."

As for geographical diversity, player representation from Africa is probably as underexploited as most other esports publishers': Like its peers, Blizzard doesn't even have a server there, making lag so confounding that the road to pro is virtually impossible for anyone on the continent.

Incidentally, the pair did address the Africa issue, because it later came up in the Q&A.

"We want a franchise in Africa. We want a franchise in India," Cherry said. "OWL was launched in 2016. Imagine basketball being launched in 2016, then by 2018 the NBA is formed, then halfway through 2018, ESPN decides to broadcast it. That's how nascent we are in the conversation. We've expanded from 12 teams to 20; that's eight franchises in one year. We're in an explosion of growth."

"Africa is top of mind," Faries added. "Nigeria has a huge Call of Duty fanbase that we serve at the amateur level now. To [Cherry's] point, it's a matter of time, scale and how to do it mindfully."

But we digress. Per Cherry, Blizzard is a big proponent of "purpose-driven marketing." A few of Overwatch's principles:

Elevating players was the most discussed of these, and we were treated to yet another sports metaphor.

"Messi, Steph Curry and LeBron James put their 10,000 hours in 10,000 hours ago, and it's important to treat them as such," Cherry said. "Every decision we make, every partner we engage, is [meant] to elevate and celebrate these athletes and to give this community what it deserves."

He talked about OWL's broadcasting style. On Twitch, "our matches are Thursday to Sunday; the format is just like sports," he said. "We have a regular season, a postseason, a postseason tournament, and will be holding grand finals at the Wells Fargo Center on Sunday, Sept. 29, in Philadelphia. That will air on ABC, just like the NBA Finals."

Next, Faries schooled us on Call of Duty, whose latest Modern Warfare iteration launches in October. The game's been around since 2003—long enough to make it a cultural reference—but has since evolved to accommodate big elements of OWL. The Call of Duty World League (CWL) now has a franchised cities model, too.

"The current CWL comprises 16 teams who compete in a regular season," said Faries. "Some will advance to a postseason and have a culminating event." There are open tournament teams, where amateurs can compete alongside pros, and "spectators" can root for them live and via stream.

"People still don't get esports. They don't think it's real," Faries said. "We think about how to create a more inclusive, dynamic experience for new fans, as well as long-term fans who've been on this ride with us for so long. We think COD's league can be the first [esports league] that's truly mainstream."

As evidence, she pointed to the blue-chip brands and endemics supporting the effort: Jack in the Box had prominent positioning (remember that Dallas Fuel web series?), as did PS4.

In Q&A, the pair were asked whether brands should approach esports audiences differently from others. Cherry provided two good pieces of advice. "Don't use the term 'e-gaming,' and there's no hyphen in 'esports.' Once we get over that, we'll be good."

Laugh if you want, but that's actually another hot button! France Esports, which represents esports interests on French soil (and with whom I'm affiliated), went out of its way to release an entire paper on the definition, proper spelling and use of "esports."

We are not fucking around.

"The reality is, be as considered as possible with any new audience you're going after," Cherry went on. "Enter with respect and humility … [and] no preconceived notions about the kid in their parents' basement. That's not the world we're talking about, and that's not the world we're building. If you think that, maybe you should wait until it's more mainstream and you're more comfortable."

Faries also built on how brands could get into esports.

"We're adapting around something that feels familiar to traditional sports league models," she said. "Brand partners can come in, and depending on consumer profile, say, 'We really want to get products in hand, we want promotional seating, we want to be on-site, we want to drive registrations.'

"You can activate at that level. Other brands want to skew more experiential. The live event model allows for that, if that's where you want to have the conversation. But the media portfolio also feels similar to how you might be activating in traditional partnerships in sports, whether it's digital content, brand advertising or social media campaign work; you can tie all that together."

She concluded, "Sometimes people think this is an altogether otherworldly environment. We're here to demystify that, but also to build a platform that works for you, your consumer and KPIs."

Cherry built on that to talk about AMA, or "average minute audience," a metric Nielsen helped back to combat the tendency in esports to report iffy figures, often unfairly compared to sports broadcasting figures. (It's the old social media versus traditional media story: When YouTube is counting every view, even one second long, and Nielsen waits six minutes to clock that same view on TV, is it really fair to compare them? This is one of the issues contributing to what some see as a bubble in the sector.)

Average minute audience represents how many people, on average, are watching a live diffusion in any given minute. It can be used across platforms, making comparison and KPI tracking more fair. Both Blizzard and Riot, which created League of Legends, use it now.

"I come from the agency world, and I get the pitching of ideas; you want to pitch this opportunity to brands, and may not have any idea how to measure the effectiveness," Cherry said. "That's not the case in the ecosystem we're building. It's a franchise sports model."

Credit where it's due, he did eventually bring up the fact that "esports" is not a single thing. It was in reference to what esports needs to do to get into the Olympics.

"When do you say 'sports,' what do you mean?" he pontificated. "Esports are multiple games and should be approached the same way. This is important to think about when talking about the Olympics. Do you want per-game, decathlon, the best player on multiple games? The lexicon isn't quite there yet. It's really for us to educate the rest of the world. When people say 'Can it be an Olympic sport?,' they need to understand it's multiple sports."