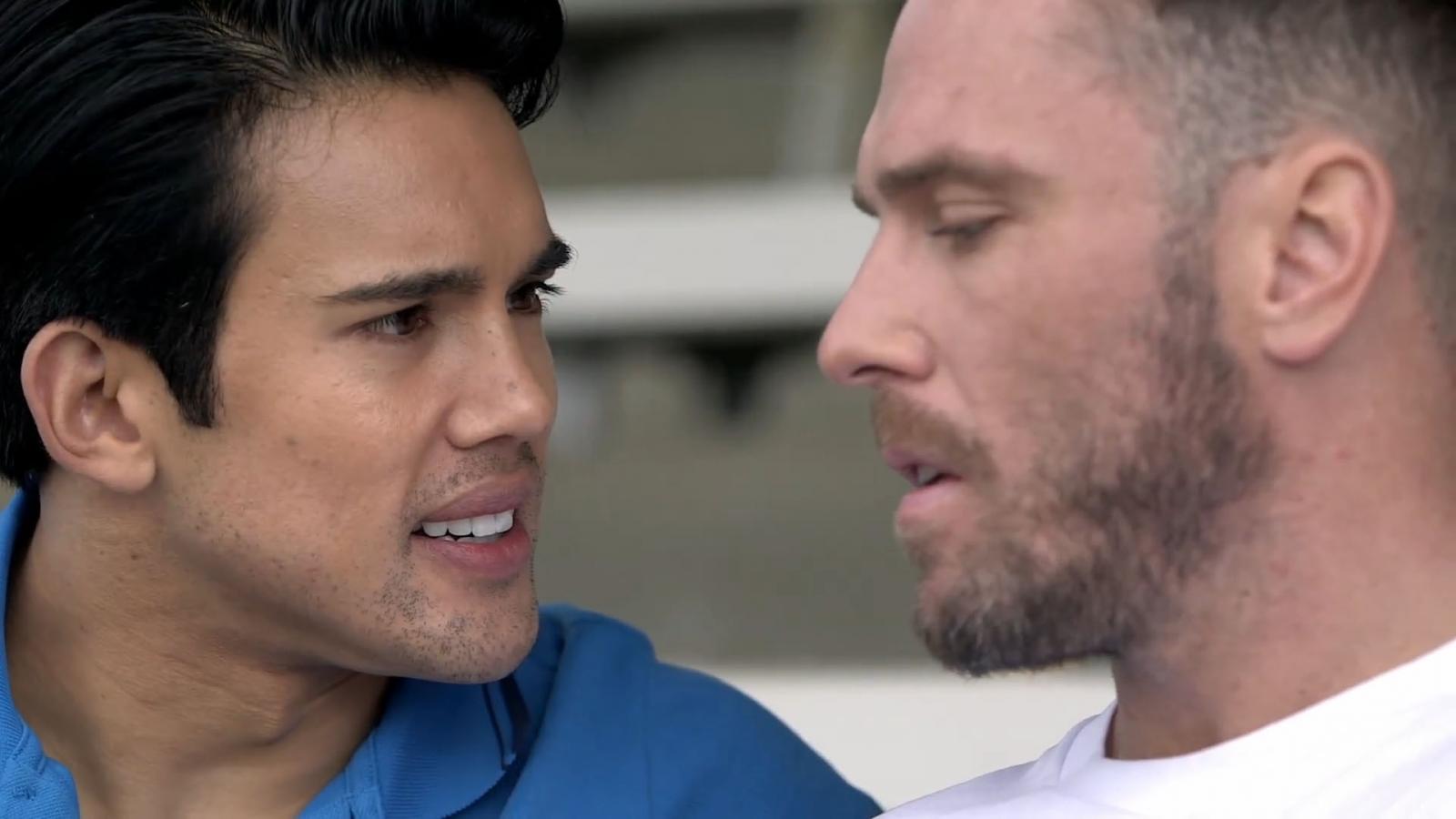 The Tale of The Horizon, the Most-Watched LGBTQI+ Series Ever

Ever watched The Horizon? In 2009, it was the first-ever gay drama series set in Sydney, Australia. Across eight seasons since then, it's become the most-watched online series ever in Australia, and the most-watched LGBTQI+ series in the world.

Like all great things, it started small—and may be one of the longest-running piece of brand content ever.

The series is made by Cobbstar Productions. We got ahold of CEO and founder Brian Cobb to score the full story.

Turns out it all started with a super-creepy Grim Reaper ad from the '80s.

"The AIDS Council of New South Wales [ACON] realized that safe-sex messaging and HIV awareness weren't getting through to the next generation of gay boys after [that] extremely successful but controversial Grim Reaper TV advertisement," Cobb recounted.

By the time they wanted to do something, it was 2009. YouTube, already 4 years old, "was now a place ACON wanted to utilize as a platform to connect, alert and educate the target audience on wearing condoms during sex … and if you don't want to wear condoms, ensure that all parties are tested for HIV and STIs," Cobb recounts.

The rest was history.

"ACON asked Aussie TV and gay activist Boaz Stark to create a YouTube video around this vision. Boaz suggested we make an 8x5min digital series, with ACON messages cleverly entwined in the storyline. This gave birth to The Horizon, now the most-watched LGBTQI+ series on YouTube, with over 65 million views and 120,000 subscribers."

The show has continued for eight seasons, with episodes that have grown to about 12-14 minutes. The most recent episode aired about eight months ago. Production-wise, few things have changed; The Horizon maintains a local feel, somewhere between a friend's amateur film and a friend's hottest brunch gossip.

Cobb attributes The Horizon's success to a constellation of factors.

"Australia, to the rest of the world, is seen as exotic," he observes. "Plus, Sydney is known as one of the gay capitals of the world. When you add the provocative and sexy approach we took to get the safe-sex messages through, I think people were titillated, explorative and satisfied."

"In 2009, not many people were using YouTube as a narrative storytelling platform. It was a lot of cat and prank videos," he said. "Audiences, on the other hand, flocked to [YouTube] searching for positive role models that they never saw on traditional TV. Plus, the 5-D camera made production cheaper and gave a high-end result," so Cobbstar could produce "great stories" at a low cost while "cutting out the broadcasters who never had the means to tell these kinds of stories."

He also acknowledges that if not for The Horizon's success, Cobbstar would still be a glimmer in his eye. "The Horizon is definitely the project that launched Cobbstar," he admitted. "Straight out of film school, I decided to do things my way instead of working for another production company. Sometimes I question this choice.

"In saying that, I've been fortunate to have great people who supported me in my vision; without that support and love, Cobbstar wouldn't exist as it does today—an emerging company starting to make a name, especially in the digital and virtual reality space, with a focus on millenials and Get Z audiences."

Television has always been a universe where people are either in or out. Cobbstar is among the players that made enough of a mark online, early on, to be a player in that larger space.

Asked what drives him personally, Cobb replies, "The process I love. It's a jungle out there, and so challenging to get financing for any project. I see my role as being the link between creative and finance. Also, seeing the final product and the happiness it brings to the collaborators really makes me smile."

Of course, projects evolve; so do clients, and the people they're talking to.

"The future informs our creativity," says Cobb, and The Horizon has experimented with many forms of storytelling, including PSA-style videos, and a documentary about Wilma, a drag queen who's been featured prominently in the show since its inception.

"Every season, we aim to make it better than the previous," he continues. "We keep up with advancements on managing HIV, which has evolved so much since the series began. We also have a direct line to our audience, who have influenced creative decisions—especially in the writers' room."

The latter is perhaps one of the biggest contributions digital has made to the production world. "The Horizon has been the direct pipeline to our audience, due to social media," says Cobb. "We get messages of love and thanks. We also get messages from certain countries that aren't as liberal as Australia and wish they could just be themselves, without having to hide their sexuality."

Cobb reveals, "Saudi Arabia is our second biggest consumer of the series"—at 18 percent of total viewers, just behind the United States (20 percent). "Blows my mind, but also makes a lot of sense, unfortunately."

Because of this strong community connection, The Horizon's DNA mixes easily with that of fans. "We met a bunch of Asian university kids at a launch of one season, who told us they chose to come to Sydney to study over London and New York," Cobb remembers. "We invited them to be extras for the next season, and they loved the experience."

Success, naturally, has led to sponsorship. The Horizon has many sponsors; in 2014, Southern California LGBT rag Frontiers LA was woven into the storyline following a co-production deal with U.S.-based New Frontiers Media.

Asked how Cobbstar has managed to balance vision and sponsorship demands, Cobb says, "In all honesty, being a safe-sex campaign has been a double-edged sword. While certain sponsors—like condom/lube and underwear companies—would buy in, other potential sponsors said it was too edgy and sexual in nature for them to sign on."

The approach Cobbstar resorts to won't surprise anyone who's ever had to sell a fresh model. "We knock on doors, tell the facts, show the YouTube analytics and strategies around how we place the sponsors brand into ours."

But he also admits there is room for compromise when the relationship is right.

"I am a massive advocate of collaboration and letting people who are experts in certain areas drive that department and utilize their natural talent," Cobb says. "I also encourage crazy ideas, and hopefully provide an environment where anyone can have a say. In saying that, there are always agencies, investors, networks and/or broadcasters to answer to, and my role is to ensure they are on board with the vision of the project. I am not scared, or look at any of the above as a hindrance; people in those roles are extremely clever and usually add value to the project."

Cobbstar is currently working on a reality show about "fag hags"—women who hang out with gay men.

"When I first moved to Sydney from Canberra, I fell into the gay scene and there weren't many straight boys frequenting gay bars," Cobb says, "but there were a lot of beautiful and inspiring straight women who felt a safety at a gay bar that they didn't at your generic bar or club. So through my gay friends, I met a bunch of 'fag hags' who I had differing relationships with over the years—some lovers, some friends, some girlfriends."

The idea of fag hags as inspiring, or valuable to the gay scene, isn't a perspective that's often heard. Cobb hopes to shine a light on them.

"The common theme I saw was a pure and unique love between the pair that I had never experienced, and how much they meant to each other," he says, referring to fag hags' relationship with gay friends. "And as reality and competition shows became 'the thing,' I believed that this could be both a really fun but heartfelt series that many people will watch."

And while we've still got time before the fag hag show hits screens, he's already playing with the idea of a spin-off—"Next Top Fag Stag… which is what I am," Cobb quips. "I hate labels, though!"

As for how he himself manages the roller coaster of running a creative business? "I have massive doubts, constantly. I also have intense belief that I am doing what I was born to do and hopefully good at," said Cobb. "On top of this, I have many people that support me and Cobbstar, people I can confide in and/or get mentorship from. They keep me on the right track. My family has also been so supportive of my career."

Meanwhile, creativity in television will only become more critical. "TV has had to evolve or die. But TV is going through a golden era... the way stories are now told is constantly surprising me, and the digital revolution has had a major part in this," Cobb said.

"The role of creativity in the TV industry is defiantly at the heart of story; it's undeniably essential." It requires "guts, risk, genius, insanity, flexibility, luck, passion and collaboration"—and, of course, "vision, dedication and leadership."

"I think a lot of people were getting sick or bored of the predictable three-act structure of film, and TV now bridges the gap between film and TV," Cobb observed. "The film industry could be in more trouble."